Funny thing, nowhere on the TAVES web site can one find what TAVES stands for! I guess it's easy enough to figure out the general idea anyway. The web page says "TAVES is North America’s ultimate consumer technology and Hi-Fi event". WOW, impressive. This was my first visit to TAVES and given the big build up from their web site I was anticipating great things. I have attended the Montreal show several times, however not in the last two years. So I arrived at the Toronto show with the idea that it would be bigger and better than the Montreal show as I remembered it.

From memory of my past visits to the Montreal show here are some thoughts on how the two shows compare:

Early along in my visit I ran into a bit of a problem; I was and taking photos and writing notes as I walked through the show and visited each room but soon after my arrival my pen ran dry! I remembered that at the Montreal show many exhibitors were giving away pens with their company name and logo on them so I figured, no problem I can pick up a pen someplace. There was not a free pen to be found in the whole building! So most of the comments are from memory.

Generally speaking, it's very difficult to obtain a good sound in the listening rooms at audio shows. Many exhibitors will say that they really don't even try as it's wasted effort. The following comments will only include very general impressions of the sound in each room.

Executive Stereo had one of the larger listening rooms. They were playing music through these beautiful Vivid Audio Giya speakers most of the day. Very impressive sound. 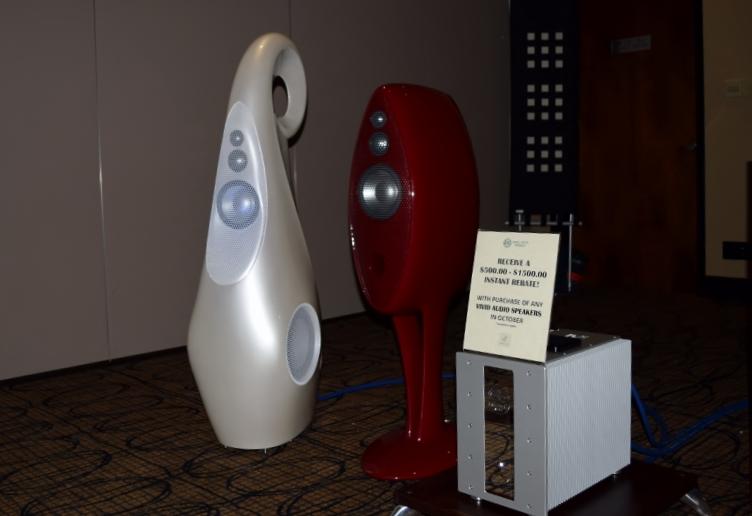 Integrity HIFI had a table with a product called the Tru-Lift. As a DIY turntable rebuilder I found this very interesting. Of course, this product is not limited to use on DIY projects. From memory, the kit shown in the photo consisting of a lifter with 4 different sized stands runs around $200. and is available in brass or stainless. The owner says that they are willing and able to adapt their tonearm lifter to many different turntables and they are willing to attempt to custom design a lifter for a specific model upon request. Expect a hefty price tag for such custom models. 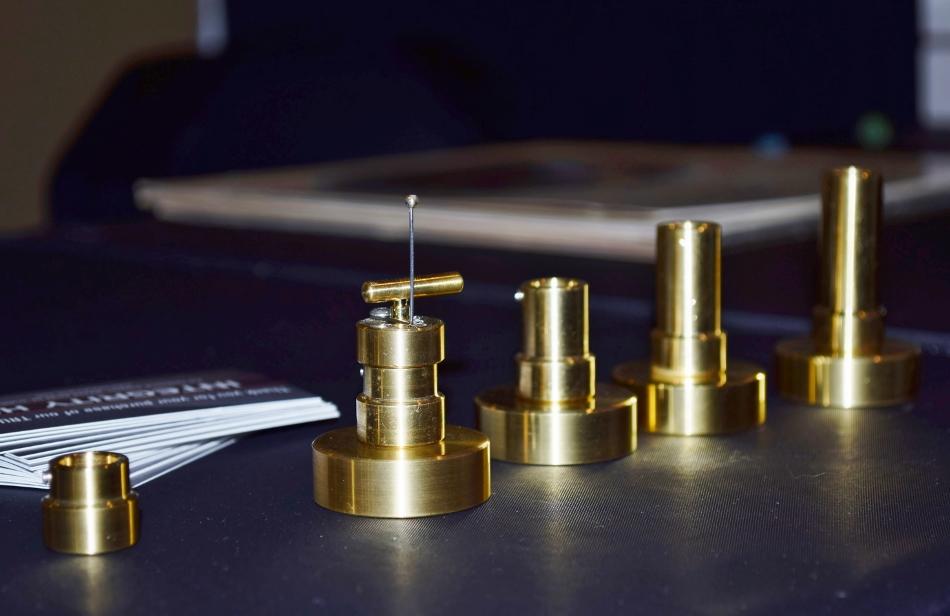 Bryston had quite a large room with an extensive array of products including speakers, digital audio, amplifiers and phono stage products.
In recent years Bryston has expanded their product line into digital audio and the first photo shows a variety of their digital audio products. At the bottom of the rack is a BAX-1 Active DSP Crossover. This device is factory programmed to be compatible with whichever Bryston active speakers you own. An interesting concept which is explained in some detail on the Bryston web site.
Riding on the wave of popularity of vinyl records Bryston has now introduced a line of phono products including a turntable. (in the past they said that they would never make a turntable!) They offer the TF-2 step up transformer which is available in two gain values to accommodate different cartridges, as well as an MM and MM/MC active phono stage. The prices are pretty steep on these phono products so one should expect high-end performance. Bryston says that the TF-2 step-up has a better transformer than its famous predecessor the TF-1 (which I happen to own). If this is the case it is certainly a great performer. Again, with a hefty price tag of about $1500. US.
< 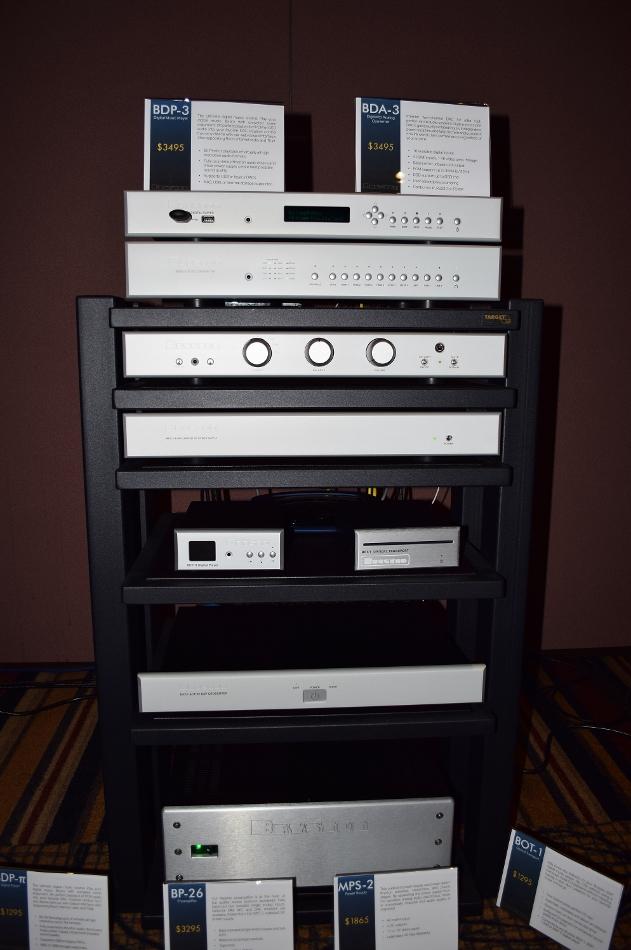 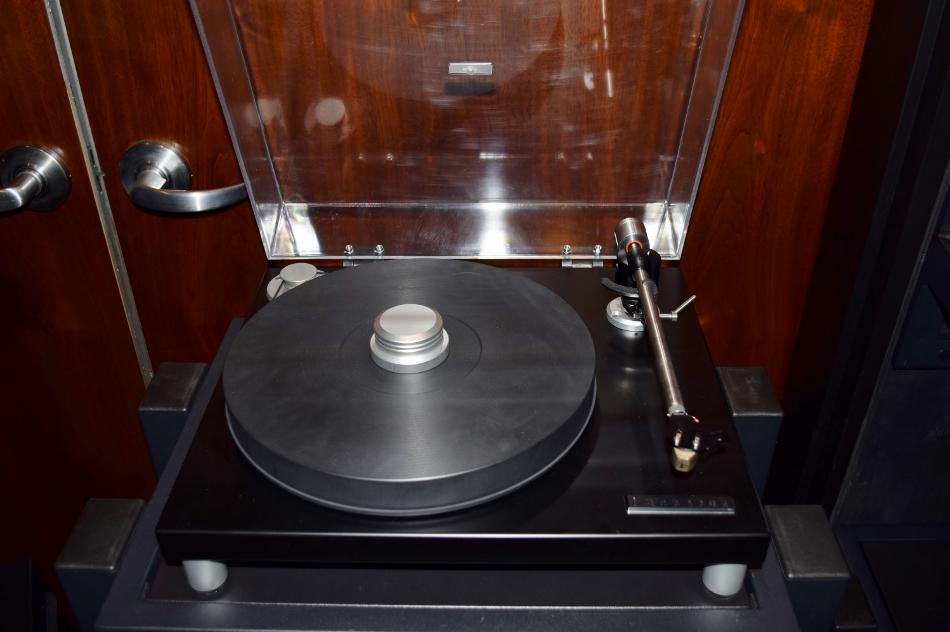 Totem Acoustic was the "Presenting Sponsor" for TAVES therefore one would expect a big show from them. In fact, their room was off on a side hall from the others so it was a bit of a detour to go there. Inside there was a large array of McIntosh electronics, one set of small bookshelf speakers and 2 sets of small floor standing speakers. None of them were playing during the few hours I was at the show. Behind a wall that divided the room in half there was a pair of very small floor standing speakers in a small triangular room with 3 or 4 chairs in it. Although these speakers were so small they looked like toys, they played constantly and filled the little room with sound. There were no labels on anything so I don't know what models any of the speakers were. There were maybe two Totem people in the room who didn't talk to any visitors during the time I was there. I was so unimpressed by the Totem room that I didn't even bother taking a photo. Seems a lost marketing opportunity for the Presenting Sponsor.

I thoroughly enjoyed my visit with Frank Fazzalari of Coherent Audio. A very interesting man who loves to talk about his designs and just about anything concerning audio systems. The bookshelf speakers in the photo played all day connected to a Triode Lab 2A3 amp with a whopping 3.5 Watts. The sound was very impressive. I would have loved to hear the big boys too. This is an example of the listening rooms that were fabricated for the TAVES show. The equipment on the table in the second photo is from Triode Labs. p.s. This exhibitor is the only one that I saw at the show that offered guests a bottle of water. A welcome touch. 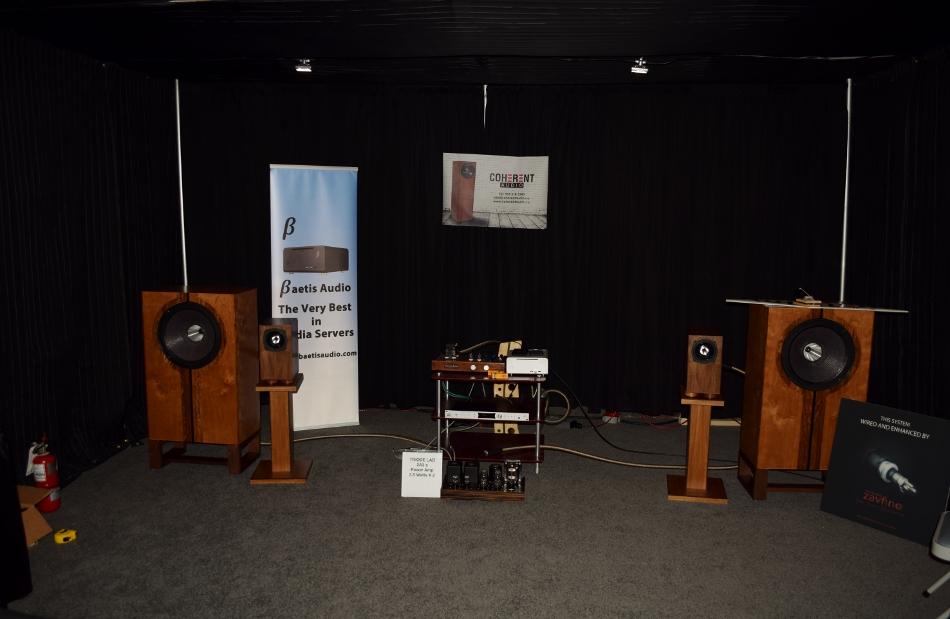 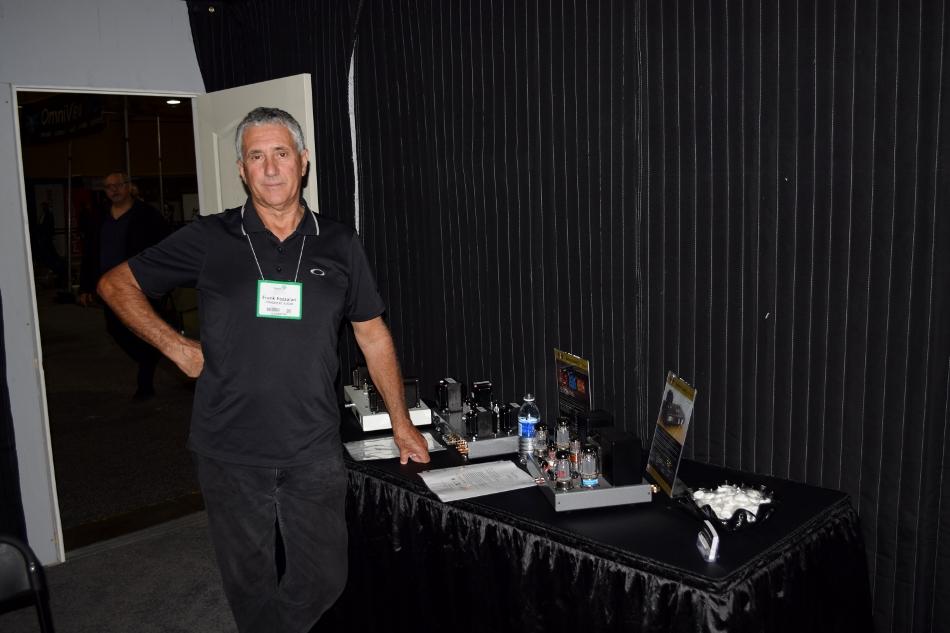 I was quite impressed by the black Von Gaylord Audio speakers (VG-8) shown in the photo. They sell for about $5000. US and are the little brother of the The Legend MK II which goes for $13000. The Legend is about the same size and shape but uses different components. (sorry, no photo) These speakers feature a 91 dB/W sensitivity which is quite interesting for guys like me who run low power tube amps. I can't remember what the amps were! 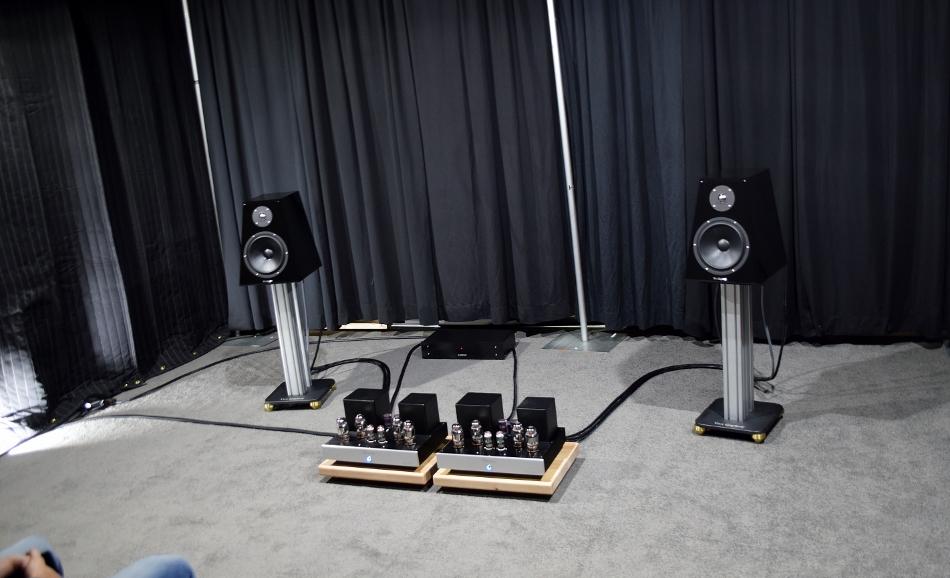 I don't remember in which room I saw this turntable but the design and the look caught my eye right away so I thought I would share the photo. The company is REED, the turntable is called the Muse 1C and the tonearm is also from Reed, Model 5T. The tonearm is a linear tracker which uses a sensor array and laser beam to move the tonearm pivot on a circular arc in order to keep the arm perpendicular to the groove. WOW! The turntable is a belt drive unit with 2 motors. Reed also makes 2 friction drive models. I am a big fan of friction/idler drive turntables, I presently own 5 Lenco idler drive units. Upon investigation it appears to be a company based in Lithuania and their products are distributed in Canada by Tri-Cell. 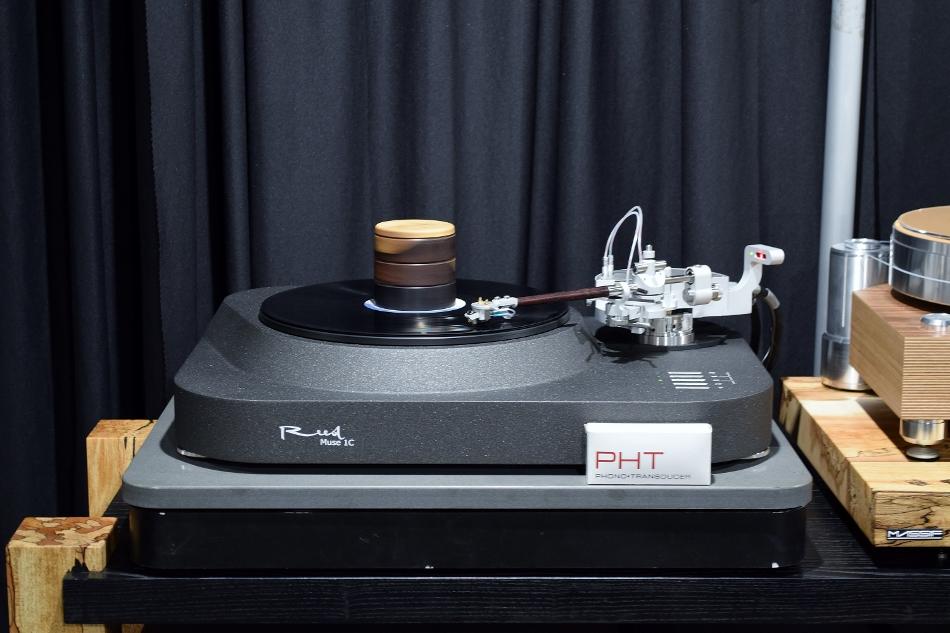 A room full of Trans Rotor turntables is always impressive. They had about 10 models on display. Lots of eye candy. 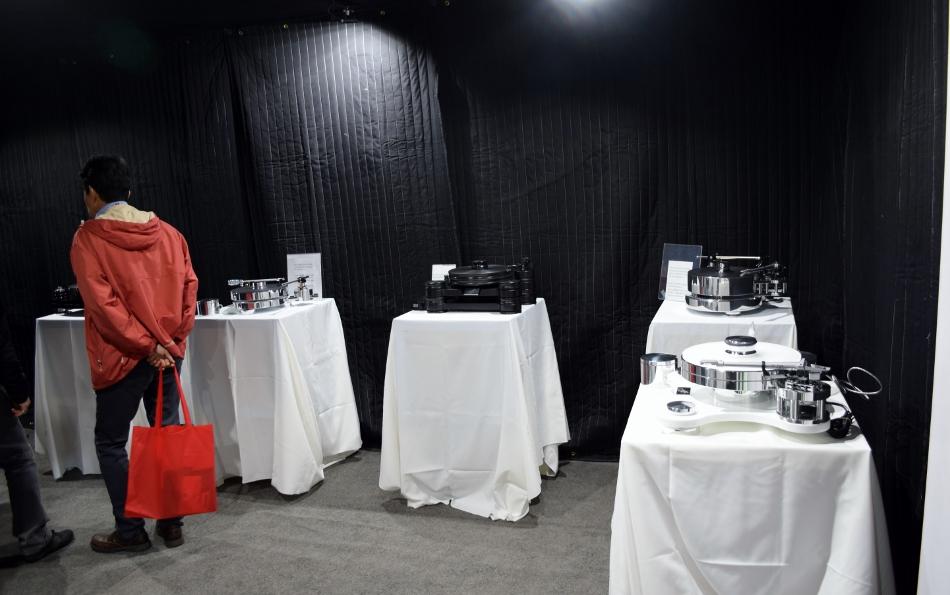 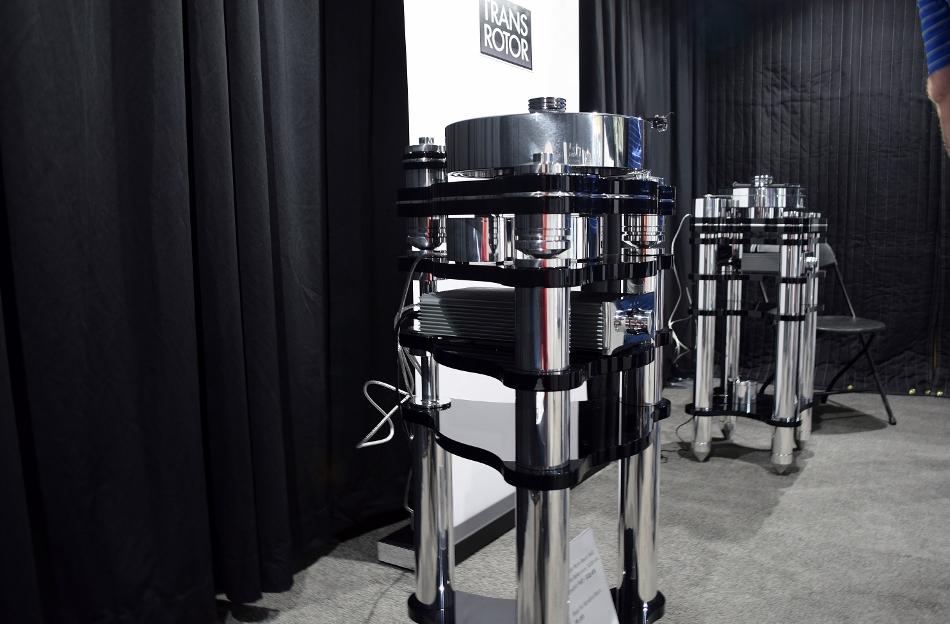 I was very intrigued by the Ruel speakers which I had never seen or heard of before. I spoke with the founder/designer, Thierry Ruel, for a few minutes. The company is based in New Brunswick and this speaker is a new design, and I believe it's their only product. Each tower in the photo is composed of 8 segments electrically linked together. For home audio use it is recommended that each tower be the complete height of the room. Each segment contains a vertical array of very small drivers (from memory 1,5 inches) in the front and a vertical array of larger passive radiators in the back. I can't see the science of how this combination works but Mr. Ruel says it does. The cylinders are made of layers of composite wood. I believe that it's Baltic Birch plywood. (damn pen!)
The speakers come with a digital amplifier. (the small box in the bottom right corner of the photo). These speakers have a very low sensitivity so it takes a lot of power to run them. Mr. Ruel explained that in his opinion the speaker was by far the most important component of an audio system therefore it is not necessary to invest a lot of the system budget in the amplifier when one has speakers of the performance level of the Ruel model. Think that might start a debate? The speakers sounded good however the volume level in the room was rather low and the music being played was not very challenging. This is about as off the beaten track as it gets! 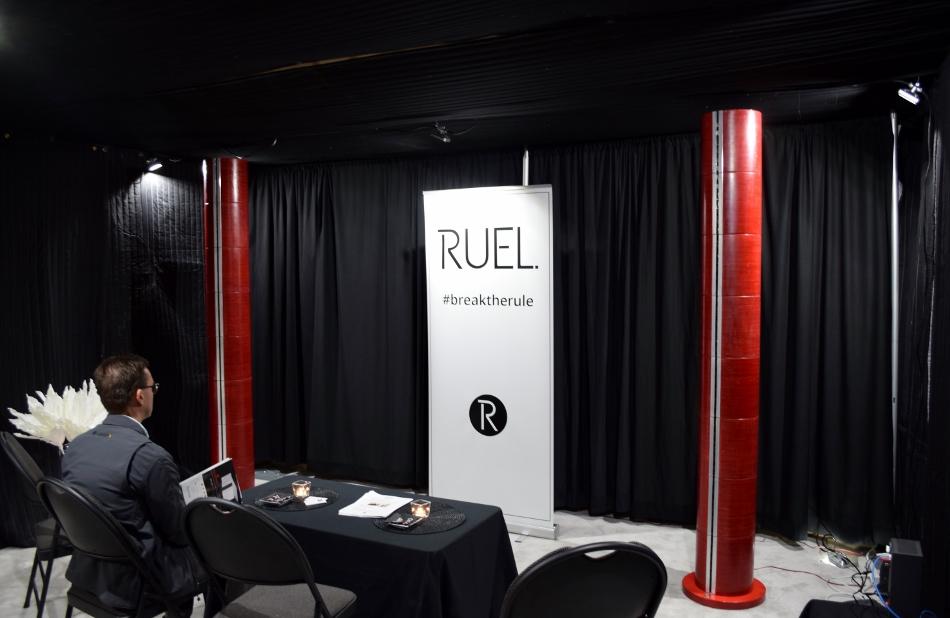 I don't remember which room the Penaudio speakers were in but thought they were worth a photo. They are sold locally by Wynn Audio who, in fact, had another room at the show with an impressive set up of Tidal speakers with Karan and Kalista electronics. The Wynn room also had a lineup of several models of Penaudio speakers along the side wall. 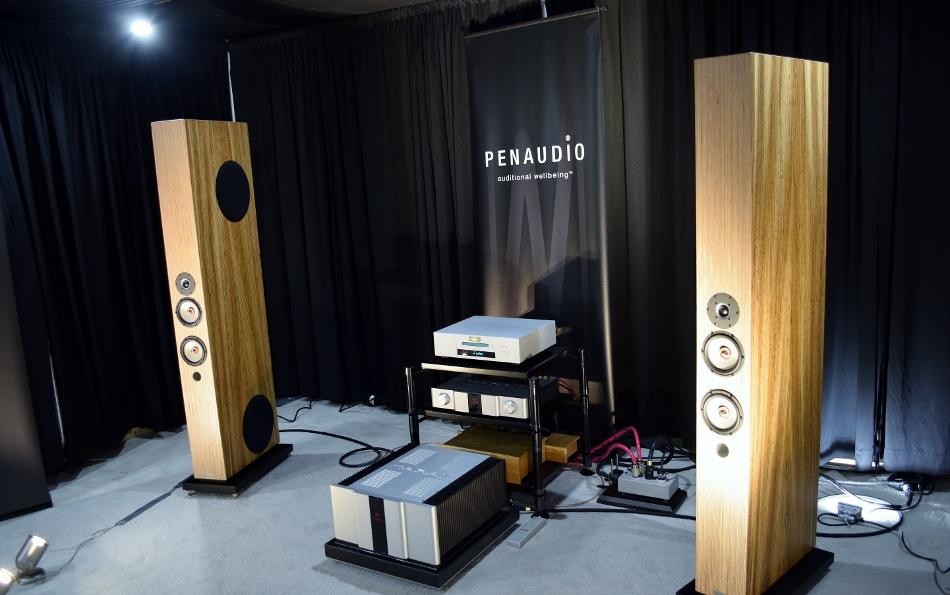 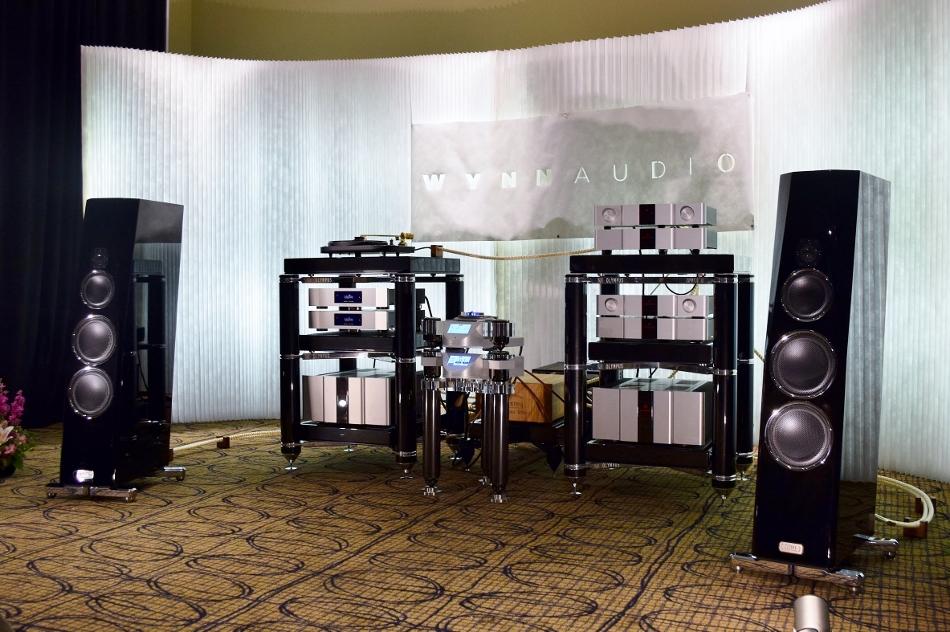 Here are the beautiful Venture Quantum 8 active speakers with Venture electronics. The finish on these speakers is as smooth as glass. 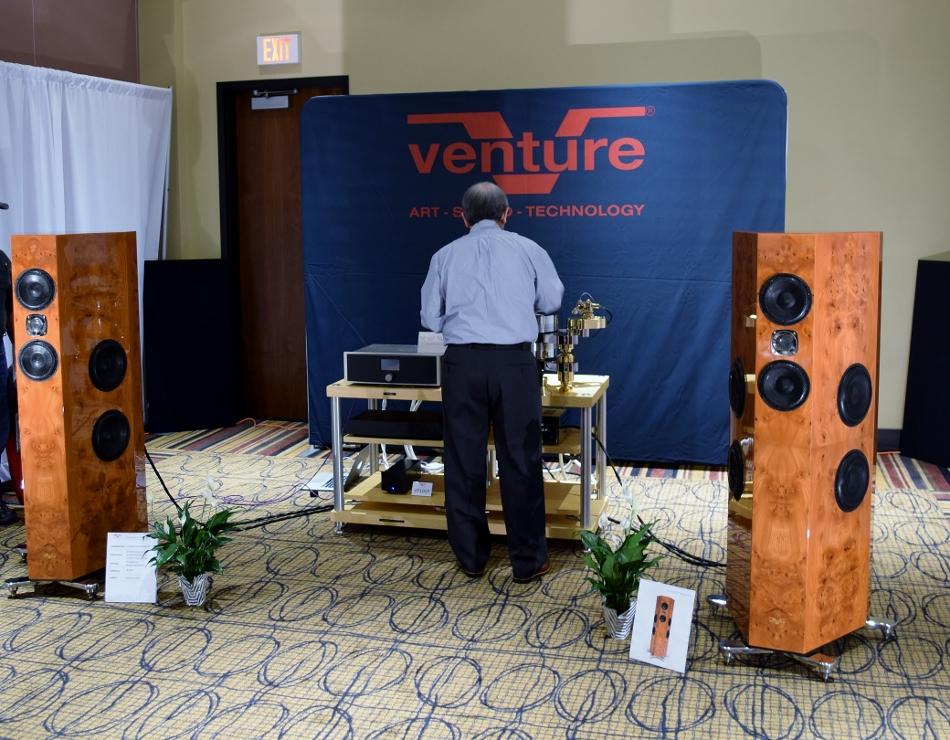 I always look forward to the Gershman Acoustic room at an audio show. For this show they set up a pair of speakers that I had never seen before and I really don't know what they are called or where they fit in the Gershman speaker family. Whenever I went into this room, which I did maybe 3 times, they were always playing some loud rock music which was not at all conducive to evaluating speaker performance. What's up with that? 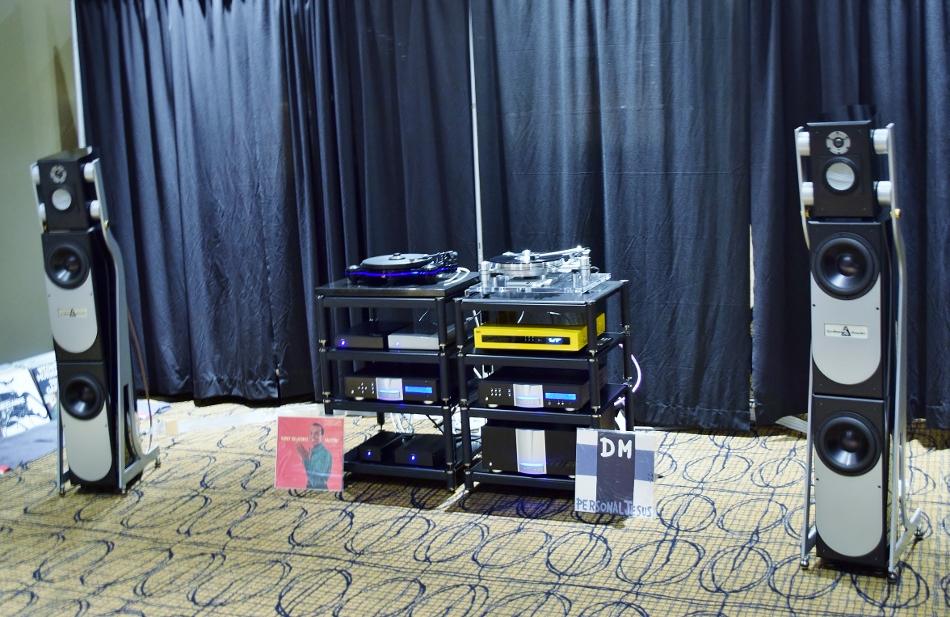 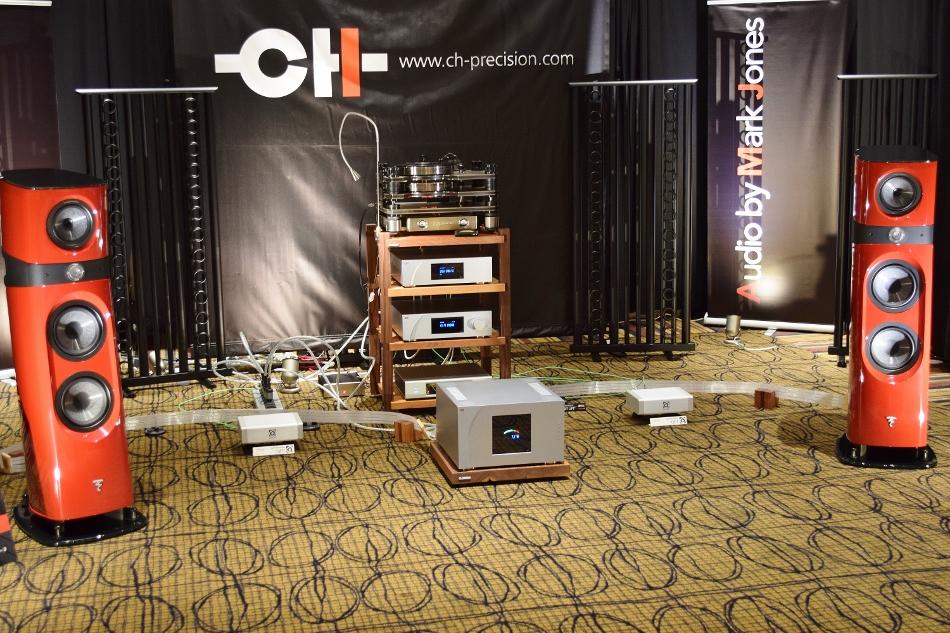 This room featured PMC SE Series speakers. Not sure any more what the amps were. I remember big impressive bass. These speakers move a lot of air. 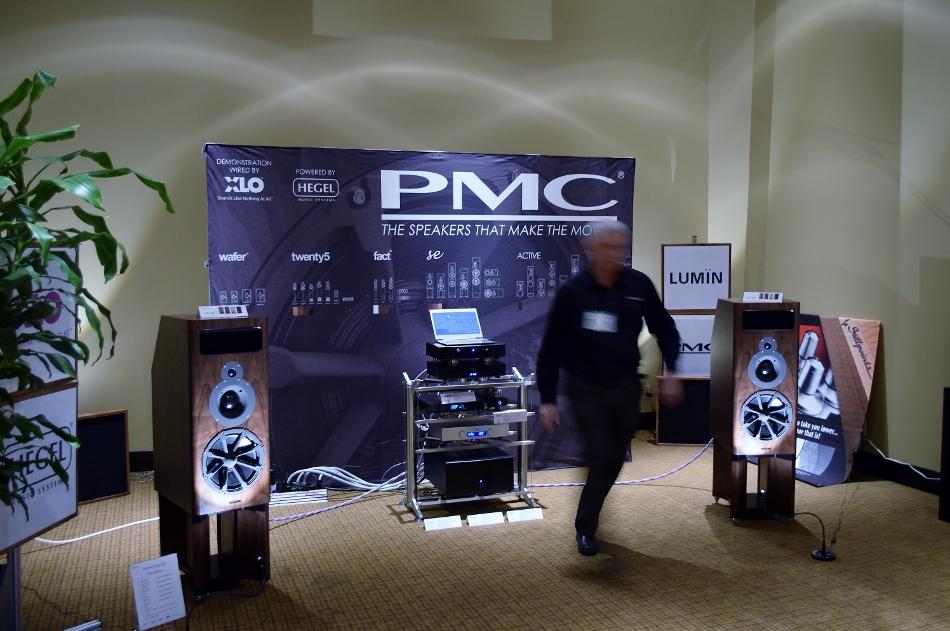 Meet Victor Kung of VK Music. I don't think he much liked having his picture taken! VK Music imports Elekit tube amplifier kits from Japan that have received some impressive reviews. I have not heard them myself except for in the noisy room at the show. I had an interesting conversation with Victor about 300B tubes. One of the Elekit amps on the table (far right) was equipped with the Genalex Gold Lion 300B which he considers to be excellent sounding, reliable and at a reasonable price. 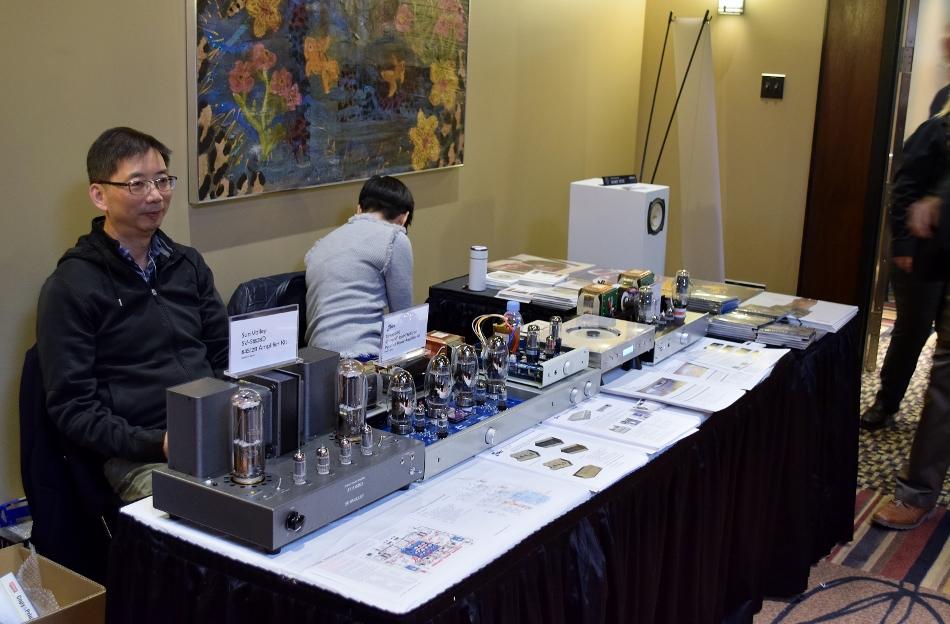 Monitor Audio had several models of their speaker product line on display. 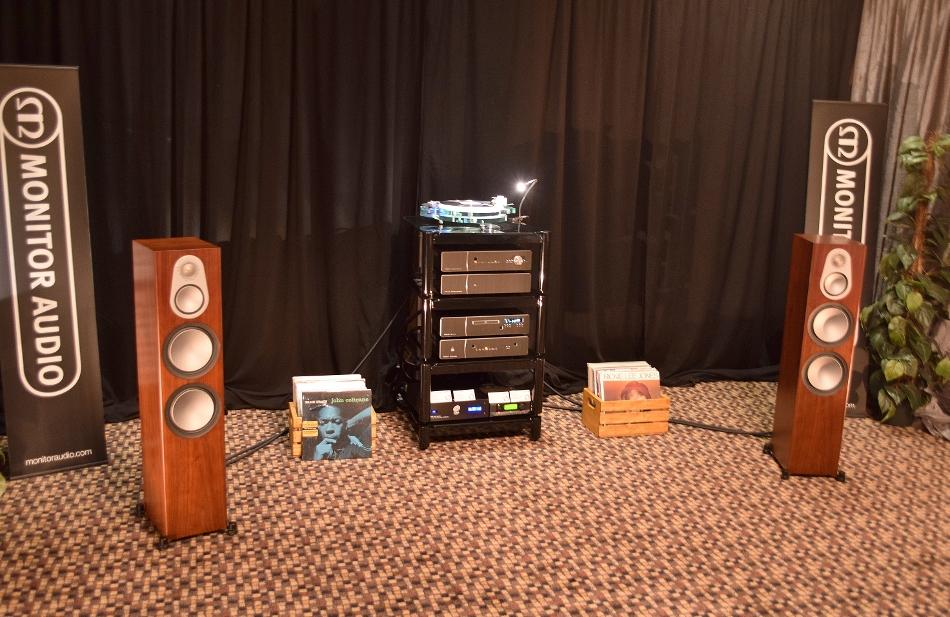 Acapella was in one of the small fabricated rooms along with several other products. Many of these rooms had mushy overcooked bass response but this set of speakers sounded just fine. The Acapella rep seemed to think that was quite normal! 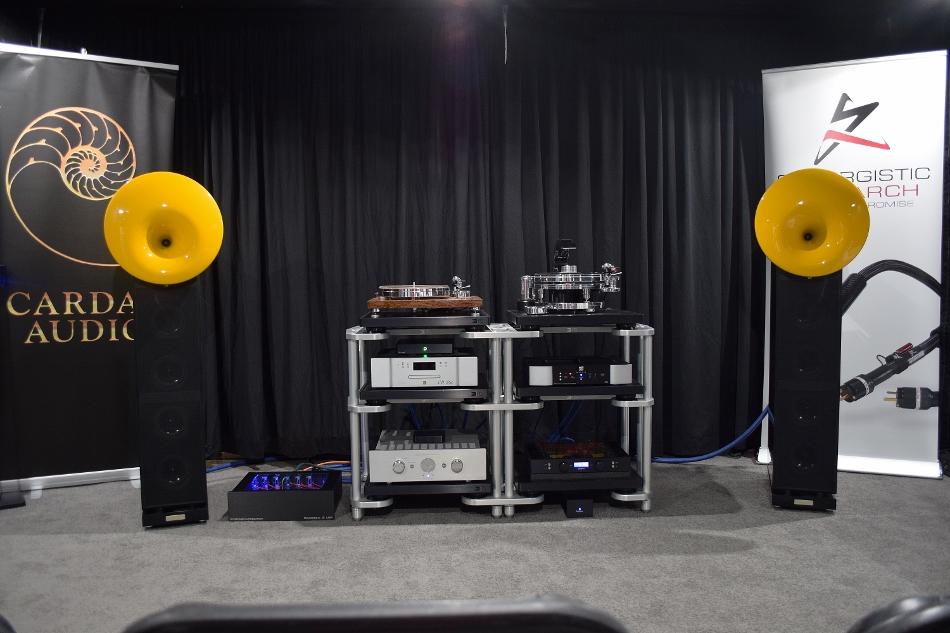 Plurison had a large display area but unfortunately it was in the middle of a huge room with many other exhibitors. There was a lot of crowd noise and music coming from everywhere so it was really impossible to hear anything clearly in this part of the building. Devialet always comes up with some sort of fancy displays for their products. The volume was set very low of course due to the poor room location. Beside that was a set up of the new Focal Kanta speakers. According to the Plurison rep, this model is so new that there are only a small number of units presently in Canada. They come in many colour combinations and feature a baffle (front) made of high density polymer. It is noteworthy that they are fairly small and are rated at 91 dB/W whick makes them reasonably easy to drive and at the same time to fit in a small room. In the show environment it was impossible to be able to really hear them perform. I would love to take these babies for a test drive on my Canary CA330 amps. Plurison also had an interesting display of isoACOUSTICS products, some Music Hall turntables and a display of Vicoustic panels. 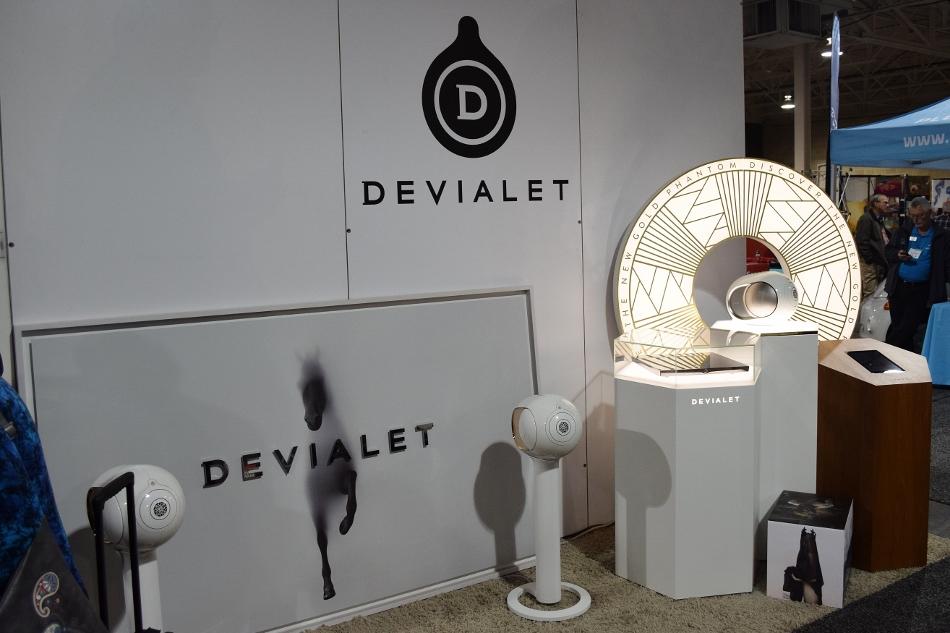 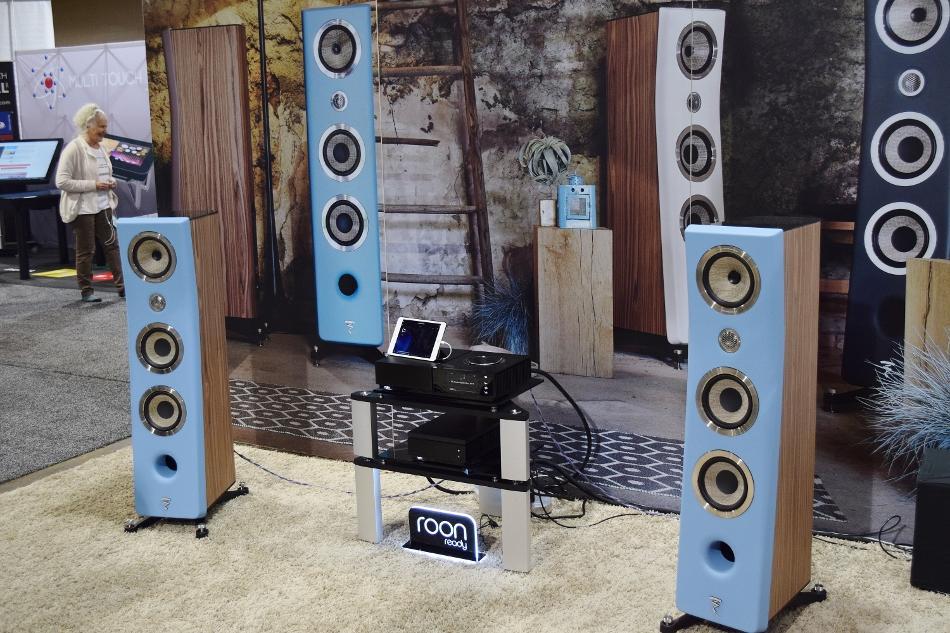 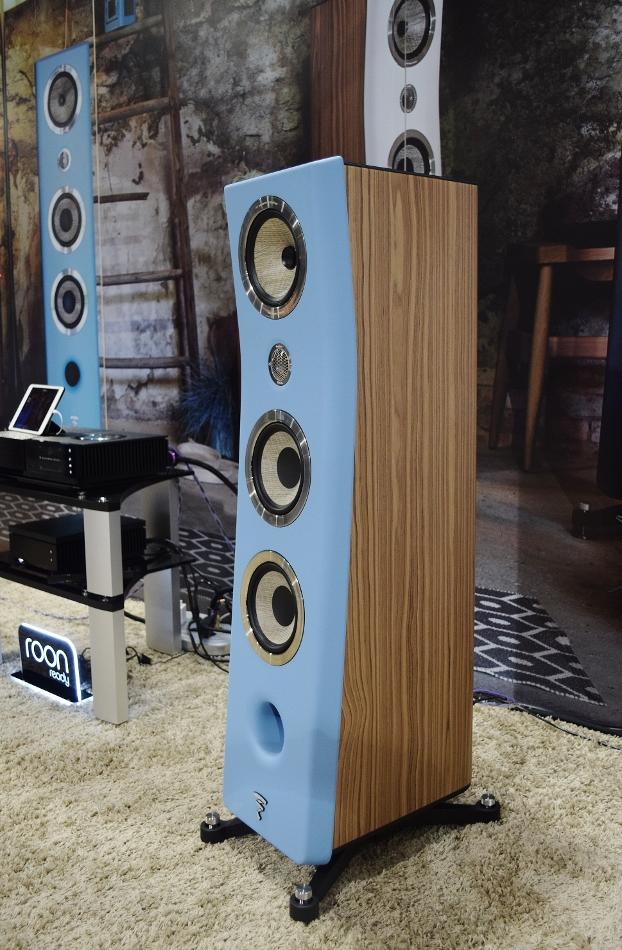 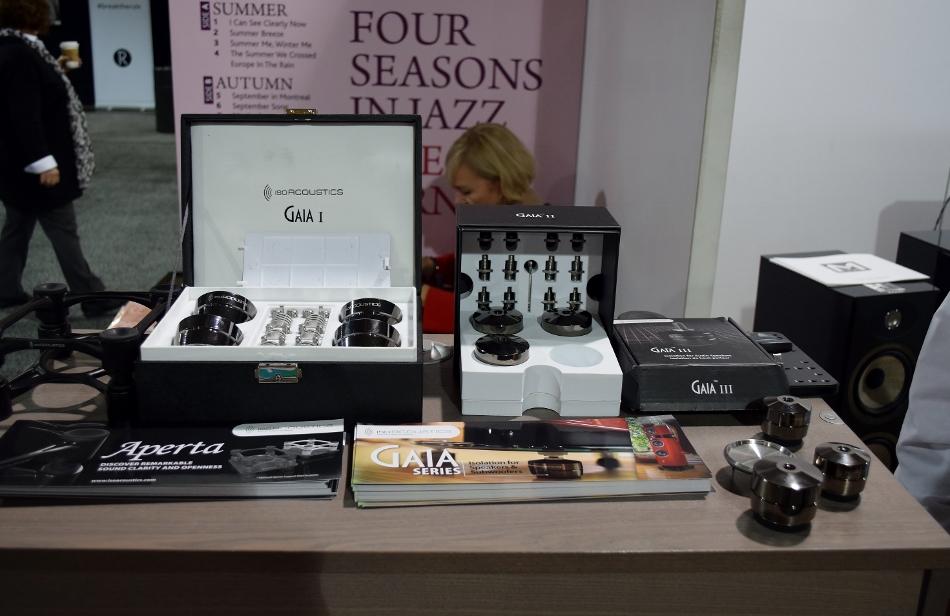 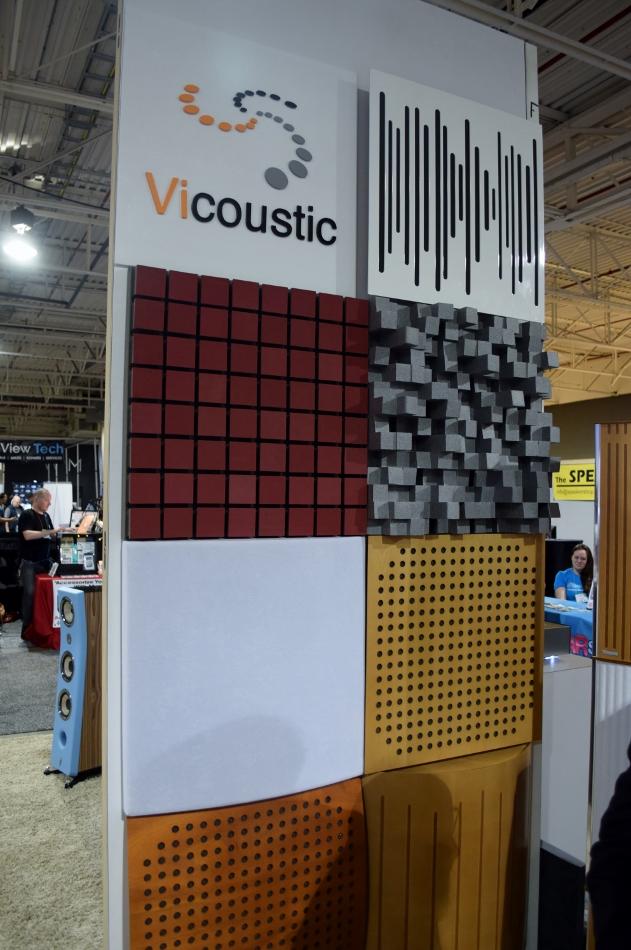