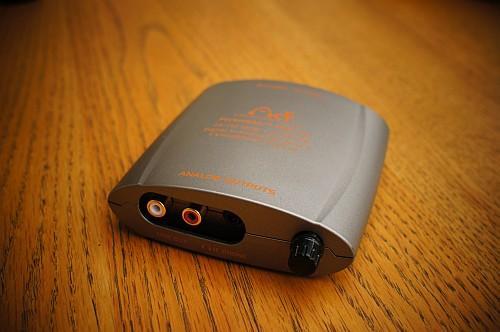 Acoustic Fun for the Masses

As someone who is keen on bargains and looking for good sound in unlikely places I was quite intrigued when David Wei of "Acoustic Fun" got in touch with TNT-Audio. What David says he’s done is taken "one of his supplier’s basic DACs and significantly upgraded it", resulting in an integrated DAC and headphone amplifier that, he claims, punches well above its weight. There are lots of cheap DACs available from the big auction site. They tend to look like plastic toys. This one looks that way, and the name "Acoustic Fun" doesn’t give the impression of a serious bit of kit. Nevertheless it seemed it could be (to start mixing metaphors) a bit of a "wolf in sheep’s clothing". Although smaller, it reminded me a bit of the original T-Amp, its small plastic case not giving any hint of the sonic possibilities it offered. As an upgraded "audiophile" version of a very simple DAC, it is much more expensive than the basic model it’s based on, so the big question is whether the modifications have been worthwhile and, for the prospective purchaser, whether it might offer good value for money.

The PDM10S is an integrated DAC and headphone amp with single USB, coaxial and optical inputs, a pair of RCA phono outputs to connect to an amplifier and a stereo mini jack output for headphones. The USB input will accept files up to 96kHz and the SPDIF inputs up to 192kHz. It is powered over USB, drawing power either from a connected computer or a separate mains to USB converter.

In Use - as a headphone amp

I tried the PDM10S first of all in its most straightforward use – connected via USB to a computer and feeding a pair of headphones. It happily drove all of my headphones beyond safe listening levels including the Sennheiser PXC250s which have a relatively challenging impedance of around 300ohms. The level of detail was one of the first things I noticed. It passed both of my usual tests of this. These are to listen for a rapid clicking noise at the back of the soundstage on Lyle Lovett’s "North Dakota" and to hear how natural (or otherwise) the audience coughing and ambient stage sound is at the start of Diana Krall’s live version of the Joni Mitchell classic "Case of You". The sound was quite neutral and there was no hint of the harshness you might expect with a cheap DAC and headphone amp. Similarly, there was no background noise or other nasties. It just did a business-like job of getting good sound out of the computer and into the headphones.

Changing back to my reference Musical Fidelity X-Cans headphone amp did put the performance into context. Going to that class-A valve amp added a hint of naturalness and extra body that the PDM10S couldn’t match. But in the absence of a comparative reference (that cost more and doesn’t include a DAC) it sounded pretty good. Connected to a laptop it would certainly provide a high fidelity headphone experience for the travelling audiophile. More to the point for my purposes, listening to the unit as a DAC via the Musical Fidelity suggested that the DAC itself was doing a pretty good job. Time to try out that functionality in more detail. 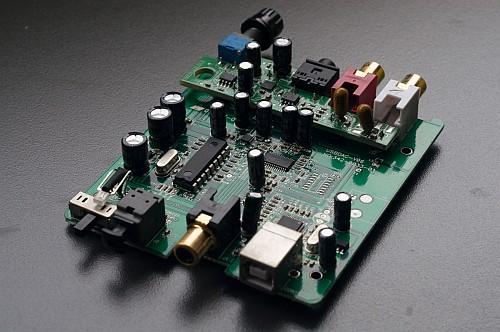 I moved the DAC into my main system, feeding its coaxial input with the data stream from a netbook via a KingRex UC192 USB to SPDIF converter. This allowed me to check out the higher rate streaming capabilities as well as seeing how it fared in a bigger system. I usually find that DACs with USB and SPDIF inputs sound better through the latter interface. I don’t know if this has to do with the design of the converters or the separation of the power supply from the signal but it seems quite consistently better.

Once installed in the main system I sat back and listened to a wide range of material, through rock and classical, folk and jazz. And it delivered the goods with some aplomb. As I’d suspected it would from the headphone sound, the DAC was transparent, had decent bass weight and detail and delivered a wide soundstage. It showed itself, for example, capable of separating out the complex sonic strands of Stravinsky’s Rite of Spring in the 88kHz Minnesota Orchestra recording, as well as delivering the drama of the string parts. Instruments didn’t have quite the body and absolute credibility that the best DACs achieve but it was still a creditable performance. It put me in mind of the Cambridge Audio DacMagic 100 which I also thought a very good value DAC.

The PDM10S was going through a Musical Fidelity A3.5 integrated amplifier and Usher Be718 loudspeakers. I found it incredible that this little toy-like device was performing at the level of a good mid-range DAC. I started to wonder if, in fact, it was sounding better than the DAC in my regular Marantz SAKI "Lite" SACD player, which was well regarded when it was launched a couple of years ago. Switching back and forth a few times I found the Marantz to be more expansive in style with a slightly bigger soundstage and marginally greater depth. But there was very little in it. I ran the comparison through with my wife who had asked about the little plastic toy that had appeared on the stereo and she couldn’t tell the difference. She’s usually a pretty good judge of these things and isn’t swayed by prior knowledge.

Following a suggestion from David Wei, I then got hold of a USB power bank. This is basically a rechargeable battery you can use to charge mobile phones or tablet devices when you’re away from mains power sockets. In this case however, because the PDM10S is powered via its USB socket but also has SPDIF inputs, the power bank operates as a rechargeable battery power supply, isolating the unit from the vagiaries of the mains supply and separating power and signal. Using the power bank improved the sound very slightly further making it, for want of a better word, more relaxed. This type of power supply could have wider application in any hi-fi item that is USB powered and has other inputs. Given the price (a decent power bank can be had for under 30 euros) it is very good value in this application.

An "Acoustic Fun PDM10S" is not of the same material quality as even a lower end DAC from one of the main manufacturers. The sound quality belies its appearance however. Whilst not threatening the upper echelons of DACs it would not be outclassed in a test of DACs of several hundred euros and it includes decent headphone amplifier. For the young audiophile on a budget, one of these DACs combined with a decent Tripath based amp and some sensitive speakers could create a system that would give great deal of insight into just about any music and deliver real musical enjoyment.