The first time I encountered the Arcam Solo was at last year's (2005) Bristol hi-fi show. I liked the styling but didn't think much of it, as this sort of machine isn't for me, I thought. When I visited the Arcam factory a few months ago I was shown the Solo again, this time playing music from an iPod Nano and through the little Arcam Alto standmount speakers. It sounded nice but, again, I wasn't too interested since there was a very impressive set-up at the other end of the room drawing my attention. Still, the guys at Arcam were so enthusiastic about this machine that I asked if I could review it. Actually just as much to please them as out of curiosity, to be honest. I associated it with the good old receiver and I certainly am a 'separates guy'. Boy, was I wrong.

On the face of it I could be forgiven for thinking this is not about serious audio. To begin with, it actually looks nice. Stylish, even, to my eyes. I wouldn't buy it just for its ornamental value, but it certainly is one of the best looking bits of hi-fi I have ever had in my living room. And then it has CD, analogue radio, digital radio and an amplifier, all in that same box! That can't be good, or can it? Well, it must be cost effective and it solves the interlink problem. And Arcam can match the components very well if they all are in the same box. And no problems with dc blocking capacitors at both output and input and that sort of nuisance. So, there are reasons to expect that this could be a very acceptable sounding system. But surely no match for a carefully selected set of separates, or is it?

Well, hooking it up to my Dynaudio Contour 1.8 mk2 speakers, which are almost twice the price of the Solo by the way, and playing a CD produced a bit of a shock! Initially the difference with my own modified Micromega stage 3 player and Anatek A50 amp seems negligible. This box just gets on with it and produces excellent music! Bass is full and punchy, mids are nicely transparent and the upper frequencies are clean and with more than adequate resolution. This is no lifestyle product, this is serious audio.

And then it happens. Just like a nice car all of a sudden looks more attractive after you've discovered how enjoyable it is to drive, this unit made a totally different impression on me after I had listened to it for a while. It suddenly is actually quite a pretty box, and having a single remote for CD, radio and amp is really perfect. Why all this clutter with separate boxes and interconnects? Why 3 remotes and a forest of mains cables behind your rack? This one-box solution makes perfect sense! What a wonderful machine! And I wasn't the only one on which this box had that effect. Several friends showed the same symptoms. Some of them are even considering buying one...

One pleasant experience was when I had played a CD through the Arcam FMJ CD36 CD player, which was also present at the time and was hooked up to the Solo as a comparison. I took the CD out of the CD36, put it in the Solo and pressed 'play'. At the same moment the amp switched to the internal CD player by itself! This machine actually thinks, albeit at a limited level! But it shows very well how good this sort of box can work, and how well the guys at Arcam have integrated all systems. It is typical of the experience, I have to say. This really feels like a very good piece of work. Everything works exactly as it should and optimal advantage has been taken from the fact that it is all in the same box. The display is another example. It isn't one of those displays you find in any CD player, with just a number of fixed symbols. No, this is a real little monitor. Very limited in resolution and monochrome, of course, but still a real little screen. So, different font sizes and some simple graphics are all possible, and Arcam have used it very wisely and effective indeed. The whole user-interface is impressive and you soon know your way around the Solo, without much need for the (excellent) manual.

It also comes with all kinds of unexpected extras: a build in clock with 4 alarms, tone control, balance control and a special bass equalisation control to optimise the performance of smaller speakers, especially when placed close to a wall. It will connect to your iPod, with a special cable, enabling the iPod to be controlled by the remote of the Solo! Care has been taken to make sure that the iPod automatically sets its volume to maximum, optimising its sound quality, with the Solo's volume control taking over. Again, simple and effective. The only thing that seems to be missing is a phono stage, but that can simply be added, even if it isn't as practical as an internal one.

The only two tiny flaws I found were the speaker terminals, which are small and too close together, making attaching thick speaker cable a bit of a struggle, and the two buttons left and right of the CD drawer. One is stop/eject and the other is play/pause. I kept pressing the wrong one. But I only used it for two weeks and I think you will get used to it after a while. And most people only connect their speakers once, not twice a week like nutty reviewers. So, overall I can say that this is one of the most user-friendly, intuitive and attractive systems I've ever had the pleasure to use.

That is enough about the peripheral issues. Maybe I should get back to the way it sounds. I said it initially sounded just like my separates. It really did, and I have to admit I was a bit worried at that moment. My amp and CD player are both about as expensive as this machine, and it also contains two tuners! I was really a bit worried, to be completely fair. Did I buy the wrong equipment? Silly separates with clumsy and overpriced cables connecting them, outperformed by the first 'receiver' that comes along? And, isn't it getting a bit warm in here?

Luckily for me and my separates I did find after a while that the Solo wasn't as good as my trusty Micromega and Anatek. It is very close, though. But longer exposure to the Solo does reveal that it's bass isn't as powerful and detailed as my system, and the whole presentation is also a bit 'flatter' and not as focussed. Switching from the internal CD player to the connected CD36 is completely unfair, of course, as the CD36 costs 40% more that the whole Solo. But it is instructive. The first thing I noticed is the marvelous way in which the CD36 can put a voice in the middle of the sound stage. Absolutely rock solid with a presence that is completely convincing. Compared to that the Solo's CD player is a bit more fuzzy and artificial sounding. The CD36 does have more resolution too, and a cleaner and more open presentation. But, strangely, switching back to the Solo's player isn't a huge disappointment. Yes, it is a clear step back, but it has more than enough musicality and coherence to hold its own in such expensive company. The same thing happened with the amp. My Anatek A50 has a more robust and dynamic presentation, with more texture and space, but the Solo still performs admirably, certainly given its price. Listening to it, you soon forget about the technical details and just enjoy the music.

I also took it to a friend, where it competed with an Arcam 8se CD player and an NVA passive pre-amp and 50-watt power amp. Very good units, these, with the power amp and the CD player modified for even better performance. My friend's speakers are the JmLab Chorus 714s speakers. This is an excellent £480 floorstander, so probably very representative of the sort of speaker the Solo is going to be used with. The Solo worked extremely well with these speakers, producing nice, deep and punchy bass and very clean and natural sounding mids and highs. Dynamics were great too, and we were able to play it very loud without any problems. It did actually sound a little better than my friends separates, proving that Arcam has made some progress since the days of the 8se CD player. And, again, just being able to put it on the coffee table and insert 4 cables in the back (power, aerial and two speakers) to produce a complete system was wonderful. What a difference to our usual troubles, spending what seems forever trying to connect everything up while very uncomfortable reaching behind some audio rack.

One question remains. Why do we want separates then? Well, I, for one, am not completely sure anymore. I bought mine when the Solo wasn't available yet, so I have an excuse. You might also want something even better than a Solo, and in that case separates are the only option. Just don't think that you will be less flexible with the Solo. This was my first thought: what if you want to upgrade? You will have to buy a new CD player, tuner and amplifier. Wrong! This machine has 5 line level inputs (one of which on the front), a tape output and a pre-amp output. You can upgrade by buying a better CD player, a better tuner or a better power amp, and the Solo will be able to cope with it, believe me. 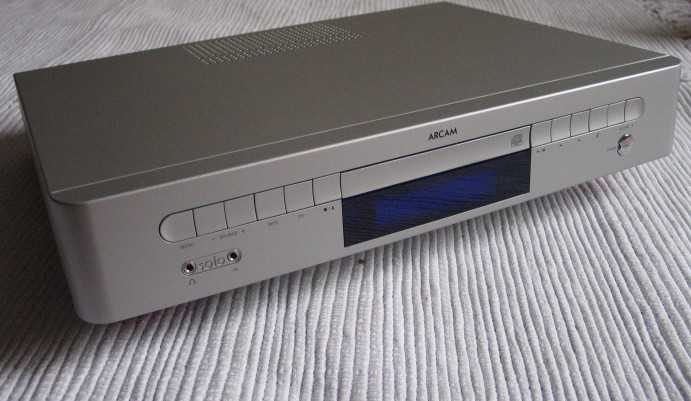 So, if you are looking to buy a system in this price range it would be an absolutely monumental mistake to overlook the Arcam Solo. That it is an all-in-one system should not be used against it, as I initially did. Actually, after the sound quality, it probably is its biggest strength. In all, this is a fantastic sounding, great looking and extremely user-friendly system. Very highly recommended, and certainly not just as a second system.