As more and more of us turn to computer streaming for our source of music, it looks as though the good old CDP is now well in decline! Conversely, and for the same reason, the stand-alone DAC can look forward to increasing popularity. Whether you are looking to convert the data from your PC sound card, or to improve on the output of something like a Squeezebox, a good quality DAC is essential. Accordingly, more and more DACs are being produced with a USB input, as well as the more usual SPDIF connection. The Audial AYA II is one such DAC. The second product of a new(ish) company, it is certainly no hastily designed 'new kid on the block'. 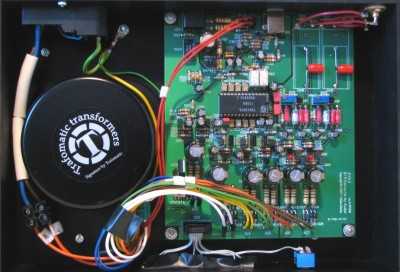 Audial is the commercial venture of Pedja Rogic. You probably won't have heard that name unless you are into DIY hi-fi. I first came across Mr Rogic in the hey-day of chip amp (or Gainclone) building. In fact, after building goodness knows how many versions of the Gainclone, I landed up with the Pedja Rogic regulated design that I still use today! At the same time that he was designing his Gainclone, PR was also working hard on a DAC based around the good old 1541 DAC chip. He was good enough to share his design, and quite a few people around the world built one. Always the perfectionist, the DAC that was to become known as 'The Model' (the first Audial product) was further refined over the years. In fact, the design became so perfected that it evolved into another model, appropriately called 'The Model II', and that will be sold by Audial later this year. The AYA is basically an improved version of his previous DAC's, and a cut-down version of 'The Model' in order to offer a DAC that will be affordable to a wider audience. Audial are keen to make it clear that the AYA II is still a top quality DAC using top quality parts but at the price can't adopt some of the other 'cost-no-object' features that are to be found on the 'The Model'.

The AYA II is a conservatively styled piece of equipment in a rectangular satin black case. The front panel sports three LED's, one to show that the DAC is powered up, one to indicate an SPDIF signal is locked on, and one to show when a USB signal is present. The back panel includes an IEC inlet, a USB socket, a BNC connector for SPDIF input, and the two phono sockets for audio out.

I first tried the AYA II on the output of my Logitech SB3. It replaced my own modified Scott Nixon DacKit and fed the buffered, regulated Gainclone also designed by Pedja Rogic. I wondered how easily I would be able to spot any differences between these two NOS DAC's but it only took a minute of two to become quite clear that the AYA II is a clear step up from the DacKit. Imaging is probably the most noticeable difference. While the DacKit is quite good at imaging, the AYA II is not only sharper, but each element, be it a performer or instrument, is more clearly portrayed to such an extent that it 'appears' more three-dimensional, more holographic. Detail retrieval is very good with the AYA II, I would say that once again, it clearly beats the DacKit in that respect. I've stuck with the DacKit for a number of years now mainly because it is very musical. I'm pleased to report that is a quality also shared by the AYA II. The timing of the AYA II is spot on, in fact what I would say most sums it up best is that it sounds 'right'. Everything sounds correct with nothing standing out at the expense of something else. The imaging is solid, the sound-stage large, it never looses control over complex passages of music. It sounds 'confident', reassuring, and classy. Any type of music that I played through the AYA II sounded good but I found that I really noticed the improvement over the cheaper NOS DACs with classical music. There was simply a better 'view' into the music, more texture, slightly more scale, and more involvement. It may be an obvious statement, but a Digital to Analogue Converter, should sound analogue, although not all of them do. The AYA II passes that test too. In fact it is one of those items that is strange to review because it is so easily forgotten once the music starts playing!

Connecting up the AYA II to my music serving PC via the USB connection, I listened to some tracks played via Banshee (using the Ubuntu operating system on an old Pentium P3 machine with 512 meg of RAM). I don't think that I could honestly say that the USB set-up was better or worse than the SPDIF from the SB3, but it does sound slightly different. Once again, I quickly forgot about the equipment and just enjoyed the music. The only other USB DAC I have heard is the Trends UD-10 that I reviewed here. I thought the UD-10 good at the time but the AYA II clearly improves on it by quite a margin (as you would expect given the price difference). As a side note, I can say that the sound using Ubuntu/Banshee is better than it was with Windows XP/Winamp, even with Kmixer disabled and the ASIO4All drivers installed instead.

The Audial AYA II is clearly a level up from the many NOS DAC's like the DacKit and Monica2 (now Monica3) from DiyParadise, and the plethora of offerings to be found on Ebay. As such it commands a higher price so is it worth it? I would say yes, given that old law of diminishing returns, in order to get a significant improvement, we need to pay increasingly more as we climb further up the hi-fi 'mountain'. Given that so much development has gone into the AYA II, that it only uses carefully selected audiophile components, and is well made to currently safety regulations, I think that it represents good value for money, more so when compared to some of the other up-market DAC's on offer. It should certainly be on your shopping list if you are looking to upgrade to something better than the entry-level DAC's.

It is also worth mentioning that the AYA II is available in kit form at a considerable saving. Full details are on the 'Ordering' section of the Audial web site.