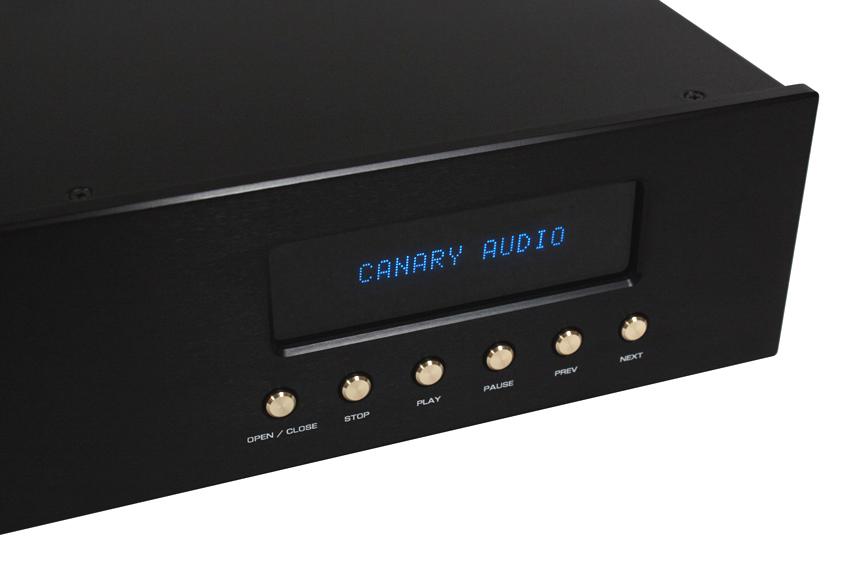 I've been quite a lucky chap recently. I'd asked Living Voice if I could review a set of their speakers and in the process of agreeing they just happened to mention that they'd like to lend me one of the Canary Audio players that they distribute into the UK. Being a polite sort of person I wasn't going to refuse especially when they explained it was the LV version which has received what they refer to as an LV Turbo. So what exactly is an LV Turbo and where does all this lead to? Well quite simply Canary Audio is distributed in the UK by Definitive Audio which is the retail arm of Living Voice. Such is the confidence between manufacturer and distributor that Canary let Living Voice modify their products which keep the original name but with an LV suffix. Simple eh? Well no not really. We're not talking about a gold badge and some shiny feet here. The modifications are quite extensive but we're getting ahead of ourselves so lets start with the basic player and then talk about the mods.

The basic CD300 has been around for a few years now and is described by the Canary audio website as having the following features:

Which already makes it look like a serious bit of kit. It certainly feels very solid and the supplied remote is similar without going into silly overbuilding or gold plating. The only issues I have with the controls is that 1) the buttons have a bit of play in them - I noticed something similar when I had the Metronome player a few years ago so Canary are not alone in having this issue and 2) the remote uses the same protocol as my Naim player causing no end of ERR messages on the Naim whenever it was plugged in during the test. Not Canary's fault and a coincidence in this case but slightly annoying nevertheless.

The standard player costs 4500 GBP and whilst it's ot the most well known player around it does come with a reputation for musicality. What Living Voice then do is take the basic machine and carefully modify certain things to get the maximum out of the basic concept.

So what have they done? Surprisingly the DAC and digital section is not touched at all rather running in the face of the usual obsession with getting a Sabre (or other chip - I've nothing against Sabre or any DAC chip for that matter!) DAC is all cost. The work is centered around the chassis, the power distribution and the analogue section. The chassis is heavily damped to reduce resonance. The internal cabling is upgraded to Kondo and a substantial amount of work is done to the ECC82 output stage. This includes the use different types of specially selected capacitors used in a particular combination that results from a (awful)lot of listening. I promised Kevin from LV that I wouldn't photograph the insides - the picture is of the standard version which shows the build quality and gives you a good idea of what you can expect. If you want to find out exactly what has happened inside you're going to have to buy or borrow one for yourself. 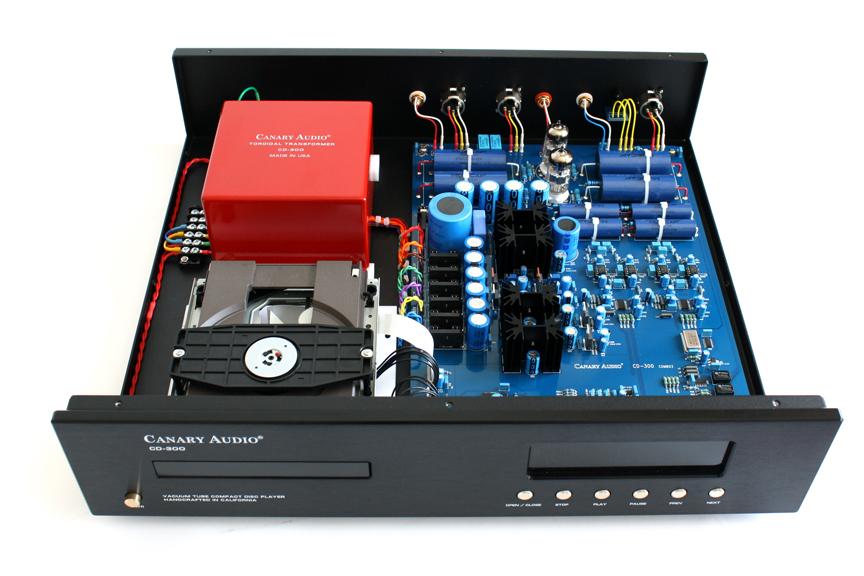 So here we have a 7500GBP CD player at the point in time where CD sales are decreasing steadily - why bother with this when you can have 24/192 downloads or DSD? Well there are those of you who will have grown up with the decline of vinyl and the quasi non existence of records especially in the classical and jazz markets. For them a decent player is still a more than worthwhile investment - all those CDs they've bought are going to be around a good few years. For those like me who have more vinyl the reduction in CD prices has been a boon and many albums of all genres are now available at bargain prices - I've certainly been taking advantage and buying CDs of the cassettes I had when I was a kid. I don't know about you but I still enjoy the concept of buying physical media. Yes it takes up space in the living room and I have to rip it to USB stick for the car but I'm still unable to catch the streaming bug. Maybe there was something strange in my last tetanus jab?

Sorry enough waffle - time to tell you what the CD300LV is all about and what it can do for you and your CD collection. As usual I tested/compared it with the following:

I thought this was going to be difficult to quantify as I don't have a selection of big budget CD players in house to compare it to. The last expensive player on loan I had was the Metronome Le Player and whilst it logically outclassed my personal Naim player (at 1/4 the price) in most areas it lacked the absolute sense of drive the Naim is so good at.

The Canary is just another level up from the Metronome. It's ludicrously fast but at the same time manages to keep a fabulous tonal warmth and smoothness. I played a huge variety of music on the Canary and came to realize it doesn't favour any particular type - what it did do is bring a sense of scale and realism to orchestral pieces that kept me going bck for more. Take for example the Saint Saens Danse Macabre on Reference recordings with the Minnesota Orchestra conducted by Eji Ouje. Play it on a lesser player and you'll enjoy it - in fact I challenge you not to. Put it in the Canary and this really start to sing (first and only use of that pun - promise). Suddenly the macro dynamics are bigger, bass goes lower and has more body and tone and small level changes are more obvious. Instruments are better placed in space and stay better focused. Most obvious is how the score becomes easier to follow. All the interwoven parts can be understood and you can see how they relate to one another. In essence the skill of the orchestra and the intentions of the composer are just easier to grasp.

Play Antonio Forcione's Tears of Joy off the album of the same name on the Naim label and it's a similar story. The guitar becomes more like a real guitar and Antonio's use of the whole of it (strings, neck, soundbox)to create both melodic and percussive sound adds to the performance. The additional percussion is better placed and louder when it needs to be but also quieter at other moments. The accompanying cello is clearer with better tone and again projects more into its fixed place in space. It as if there are more possible volume levels available from the player than I'm used to.

Another example I can give here is the whole of Disclosure's "Settle". I dug this out thinking I was going to be able to catch the Canary out. Kevin's a big classical listener I thought, he won't have tested this with some dance music. Maybe he didn't but the Canary is just as good here. There's bass speed, realistic synth tones, imaging, timing and need I go on?

Having the Audio Note TT2 Deluxe with and Arm II and IQ3 in house gave me the opportunity to run some tests against a quality turntable. Frankly I don't have a outright preference - the Audio Note has a more apparent and defined treble but I would say the Canary has more weight in the bass. This can of course be down to mastering of the software so it's never the fairest test for either machine. What's important here is that they both succeed in getting the music into your home and making you smile a lot. And that is where I think the Canary really scores. It does all the hifi stuff but never forgets that it's there to play music and that it has to get everything in the right place at the right time at the right level whilst preserving the character of the instruments and the people that play or program them. In essence there's something very organic about what it does.

It's time to talk about perceived value as I'm sure some of you have picked up on the modifications that have been done and have uttered the famous "I can buy those bits of the internet and fit them for a lot less that 3 grand". I'm not going to attempt to argue with you - assuming you know what bits to add and you can get hold of them (Kondo wiring is quite rare on Ebay) you could buy the standard player and upgrade it. But (and it's one of a size that Nicky Minaj would be proud of) what you're paying for here is a lot of work and listening and trial and error and experience to find that elusive combination of components that bring about musical greatness. That does not come cheap. Living Voice have taken the trial and error out of the equation and have created a fabulous player that still keeps all original warranty. The hot rodding doesn't reduce it's reliabilty or make it quirky in any way. Switch it on, leave it on and play music - simple as that.

I've been putting this review off a bit(!) as in all honestly I'm going to miss this player an awful lot and once I finish writing this it will be heading back to it's maker to impress potential customers. I'm inclined to sum this one up with a wine reference if only to change from my habitual automotive references. A lot of hifi is like Chardonnay - nice, easy to live with but maybe a bit uniform and samey. The Canary is to me more like a Viognier - it makes you sit up, take notice and think - "I'd like some more of this" and before you know it the bottle's gone. I'd suggest that if you are in the market for your last ever CD player and have the budget for one of these a trip to Definitive Audio/Living Voice would be well worth your while.