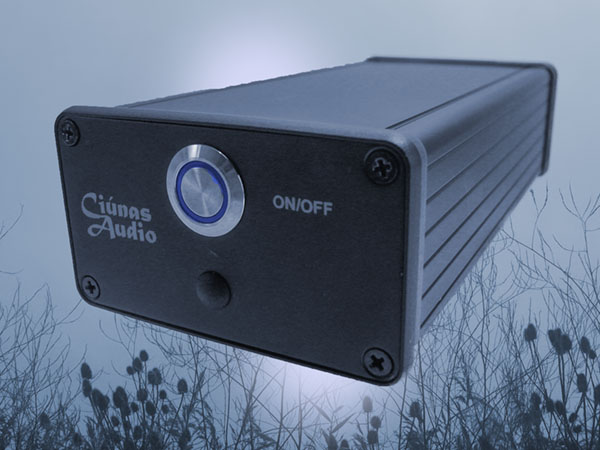 ISO-DAC in the fast lane?

Last year I reviewed the Ciúnas Audio battery-powered ISO-DAC, and very much liked what I heard from it. Little stands still in the world of technology, and hi-fi is no exception. And John Kenny doesn't rest on his laurels either. He has gone one better than the battery power used in the original ISO-DAC, and now uses what he calls supercapacitor power for the Ciúnas Audio products. But why a supercapacitor, and how does it differ from the standard battery supply? I'll let John Kenny explain in his own words:

Both of these power sources provide super stable DC voltages at the currents required by audio devices. This stability is one of the key characteristics of a power supply driving any audio equipment but crucial for devices that handle very low voltage signals. Stability means not only preventing voltage sag when dynamic current is required but more importantly doing so without any fluctuation on the ground.

Digital audio transmission & processing is often done in distinct chunks (packets) & often required almost instantly. These gulps of current often happen with very high frequency timing. For instance, high speed USB data arrives in microframes of up to 1024 bytes (max) every 125uS. The amount of data in each microframe will vary & other control signals will also occur at different intervals. So any power supply being used in this situation needs to be immune to all these fluctuations in timing, current delivery. If not immune then the result is usually noise on the ground which has downstream effects on audio quality.

Both batteries & supercapacitors are still unfazed & stable when delivering the needed current. This means no dynamic noise is created in the ground plane which ultimately affects the audibility.

Apart from the power supply there are only minor changes to the Supercapacitor ISO-DAC. The extruded aluminium case is retained but the input for the charger is moved to the back panel. What has changed is the price, and in a good way! The price of the battery-powered ISO-DAC when reviewed was 500 euros (without the hub) while the supercapacitor version is currently selling at 400 euros, making it something of a bargain. Like the battery powered ISO-DAC, the supercapacitor version can be left with the charger connected and switched on, and there is no degradation of the audio quality.


I really don't know what to add to what I wrote about the battery-powered ISO-DAC last year:

There is no waiting to detect the sonic qualities of this DAC, it is apparent as soon as you start listening. It has a very strong presentation, but is never 'shouty'. I would describe the balance of presentation as very slightly to the darker side. The bass is certainly very strong, but well controlled, tight, and tuneful. The mid-range is smooth, and the top end lacking any signs of glare.

What I also noticed from the start, well actually at the ends of tracks, was where they faded out, I could very clearly here the detail until it was actually gone. More so than I have done in the past. And of course this also showed in the whole track with every tiny part of the music clearly audible. I could describe the ISO-DAC as a sonic magnifying glass, teasing out every little bit of detail from the recording. All this came from an inky black background which increased the 'presence' in the music. Every part of the performance of the ISO-DAC is highly satisfactory, the timing, the musicality, the sound-stage, and imaging, making for a very pleasant, and engaging listening experience.

I have in the past expressed my preference for (good) mains powered USB DACs over those using battery power. I can honestly say that with the ISO-DAC, I did not notice the very slight lack of dynamics that I have experienced with battery-powered equipment in the past. So it appears to have all the advantages of battery power, with none of the disadvantages.

Although I didn't have one of the battery powered ISO-DACs to make a direct comparison, the supercapacitor powered version did appear to have a bit more 'speed' and 'attack'. If the battery-powered ISO-DAC alleviated my concerns about equipment not supplied by a mains powered PSU, then the supercapcitor version removed them completely.

Would I recommend upgrading from a battery-powered ISO-DAC to the new supercapcitor version? That's a hard decision to make because the former is such a good DAC. But if it was me, and I could get a decent price for my battery-powered version, then I would certainly go for the latest version as it does offer a small but tangible improvement. And remember, thanks to the Ciúnas Audio option to try before you buy, you can decide for yourself.