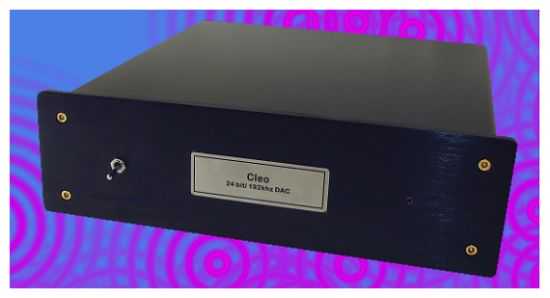 At the time of writing, the USB DAC appears to be one of the most popular items of hi-fi equipment judging by the amount of new ones appearing on the market these days, and the number arriving at my house for review. The days of the CD player being the standard method of playing back digital music are on the wain, and it looks like that it will be computer-based playback equipment (either USB DAC's or streaming devices) that fill the void. The DIY HiFiSupply Cleo is the company's first venture into the world of PC audio, and is based on a modified Musiland USB DAC. DIY HiFiSupply have modified that with their own high-precision clock, added one of their valve output stages, and housed it in one of their own cases, complete with their own power up-rated supply. Various components in the Musiland have been upgraded with better parts.

I actually received the Cleo after fellow UK reviewer, Maarten Van Casteren had been reviewing it, and was asked to give a second opinion, as I have a bit more experience with this type of item. The Cleo looks almost identical to the DIY HiFiSupply - EZ Linestage - preamplifier kit that I reviewed in June 2009. It's an attractive looking case, sturdy, and non-resonant. It's only when you go to open it to say change a valve, that you come to ask questions about its design! On the front of the Cleo is a power switch, and the blindingly bright white LED that Maarten referred to. Hopefully that will be fixed on the production models. On the rear is the IEC mains socket, and a USB socket. The Cleo is USB only, so you can't connect it to say the output of a CD transport with SPDIF output.

The Cleo is an asynchronous DAC that means it controls the flow of date from the computer, rather than the computer. This in turn reduces jitter and improves accuracy.

By way of a manufacturer's reply, DIY HiFiSupply have told me that the review sample is one of their prototypes, and the production models will have a much neater interior layout. Here is a picture of one.

The Cleo comes with its own drivers. Well at least they are the drivers for the Musiland but they install easily. DIY HiFiSupply also provide a comprehensive guide for setting up the Cleo. The Cleo must be used with one of the Windows based operating systems as (at the time of writing) there are no drivers for Linux or MAC based operating systems. With the drivers installed, you then need the right playback software to hear the Cleo at her best. I found that there are two options (there may be more): Winamp used with the ASIO output plug-in, and J-River Jukebox, used with its built in 'Direct Output'. In fact if you are completely new to all this PC audio, I would suggest going with Jukebox as it is the easier to set up and use. But it must be stressed that playing the Cleo through Windows own output will seriously compromise its performance. This isn't a tutorial on using a USB DAC so I will assume that you have music ripped to a hard drive, can configure the playback software to find the media, and are ready to play some music.

I initially used the Cleo in what I refer to as my second system which at that time consisted of the PC, Cleo, and ONIX A55 integrated amplifier playing into my modified MS Pageant speakers. This was pretty much what I had been using to audition three or four other USB DACs, around the same period. The Cleo immediately impressed me (played using Winamp/Asio output). It dug so deep into the recordings that I felt I had stepped another rung higher on the ladder to hi-fi perfection. But it wasn't only the amount of detail that it could pull out, it was the tonal quality of the music as well. It's a slightly darker presentation than say the KingRex UD-01 Pro, perhaps slightly less 'airy' but with more authority. Sound stage was large and very three dimensional. In fact on a couple of tracks that I played, the sound stage appeared to travel well beyond the confinement of the side walls. Bass went very deep and was well defined, and the top end was clear without ever becoming tiring. Pace and timing were spot-on. It's sometimes difficult when comparing similar items of hi-fi to say that one is clearly the best, or at least that one is a clear favourite, but the Cleo was for me the best of the USB DACs that I had heard to date.

The sound of the Cleo is both very musical, and very good as regards the qualities that we look for in hi-fi. Using my trusted benchmark album, 'Amused to Death' I found the position and quality of the Q-sound effects to be as good as anything that I have used to date. The tonal quality is rich and varied, as shown for example with the guitars in 'Stairway to Heaven' by Rodrigo and Rodyella. Every single note was beautifully portrayed. Listening to a section of Brahms's 4th symphony, the whole orchestra could be heard from front to back, and the emotion of the piece was quite moving. Sampling a few tracks from the Eagles album 'Long Road out of Eden' the bass lines were fast and well-defined. The tracks bounced along with an addictive beat, and the lyrics were brought out of the mix such that every word was clear. Solo voices of the likes of Stacey Kent and Diana Krall were brought closer making them more intimate. In 'busy' music, eg Acoustic Ladyland's 'Skinny Grin' everything is held together firmly.

Trying out Jukebox instead of Winamp produced the same results with the Cleo, and I don't think that I could tell any difference between them. I did also try Foobar with the Cleo but couldn't get it to work with the ASIO output plug in, so that wasn't used for this audition.

Having established that the Cleo was probably my favourite USB DAC to date, I wanted to move on and try listening to some higher resolution material. Most of us will have the bulk of our digital musical collection made up of the standard Red Book format, ie 16 bit/44.1 kHz. The Cleo is one of a number of DACs that can play 24 bit material at 96 kHz, or 192 kHz (as well as 88.2 kHz and 176.4 kHz). Don't worry too much about the numbers, it's just that higher bit rates/frequencies allow more information to be stored. Think of it rather like pictures that you see on your computer. On a monitor screen anything around 96 dots per inch (dpi) will look good but if you print out the same picture at 96 dpi, and say 300 dpi (higher resolution) you will see that the one printed at 300 dpi is much sharper and contains more detail. And that's the effect that is being striven for with the higher resolution music files.

I found only one album in my collection that was recorded at 24/96 so I went hunting on the Internet and found some free samples to download. Soundkeeper Recordings were also very obliging. They had already supplied me with a 16/44.1 CD of the Equinox album. They then sent me the 24/96 and 24/192 files for comparison. So I had the same recordings in three different formats for direct comparison. The standard 16/44.1 recording sounds very good. There is no processing involved, a pair of microphones is used to record the music live, and in real-time as it is played. The simplicity of that method, and lack of any more processing, results in a very clear and natural recording. However, when I tried the 24/96 version it was quite noticeable from the outset that the sound was slightly better focussed, and detail was improved (sharper). With the 24/192 I had to listen very carefully to hear things improved still further, but by much less of a margin. After listening to the 24/96 and 24/192 versions of the album, going back to the 16/44.1 version sounded a little de-focussed for want of a better term. But to be honest, after a minute of two, it sounded quite 'normal' again.

So are the higher resolution formats worthwhile? I would say definitely yes. Played through something like the Cleo, the music does take one step nearer to sounding 'real'. Does this make all our 16/44.1 recordings obsolete? No I don't think so, at least I have still been enjoying all mine since listening to the higher resolution stuff while writing this review. Perhaps TV is a good analogy here. One of my neighbours has HD (high-definition) TV and I sometimes visit him to watch soccer. I enjoy the better picture quality but don't feel any sense of depravation when I come home here to watch my standard resolution TV.

The Cleo DAC really shows its capabilities when playing the higher resolution material. A track that I download in 24/176.4 format (from Design W Sound) sounded as good as anything that I have ever heard coming from hi-fi speakers. And all this was with the stock Tesla ECC88 in place. DIY HiFiSupply sent me a Philips Miniwatt Ecc 88 to try in its place, and that made a slight improvement. It brought out the midrange slightly making performers appear closer to the listening position, and brought out details, rather like placing a magnifying glass over a section of a picture. To be honest, with either valve, the results were good enough to keep me listening to track after track.

Of the three 24/192 capable USB DACs that I have reviewed to date, the Cleo is my clear favorite. Simply put, it has a WOW factor that I didn't quite get with the others. It doesn't have the facilities of the Wyred4Sound DAC2, or the ONIX 25A (that is also quite a bit cheaper) but if it is sound quality that you are looking for, and you want to take music from your hard drive using USB, the Cleo has my strong recommendation.

One final word on comparing the Cleo with other USB DACs like the very good ONIX 25A. I enjoyed the 25A more with a valve buffer after it whereas the Cleo with its valve output stage got the same results when connected directly to the amplifier. This is worth keeping in mind when comparing costs, more so if you like the sound with valves somewhere in the system.