A photo essay about rewiring 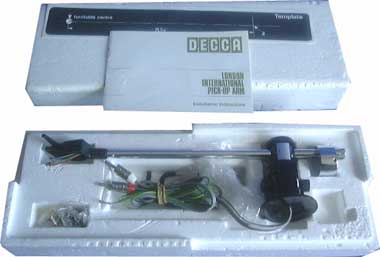 The Decca International tonearm is an early unipivot designed for Decca cartridges. It has a number of interesting features:
* the unipivot floats on magnetic suspension to damp the effect of rumble from idler drive motor units;
* the bias compensation also works with magnets, so there is no physical constraint on the movement of the arm caused by weights or springs;
* it can be fluid damped to correct problems with resonance frequency;
* it is fully adjustable for height, tilt and overhang, allowing for accurate setting of vertical tracking alignment, tracking force and azimuth.


Such careful design and adjustability makes it a very useful tonearm. A contemporary review reproduced on the web here complained that the build quality was substandard for a fairly expensive arm. Yet, its conclusion was still positive, concluding, 'this model merits consideration'. By the way, I think the French review on Vinyl Engine is of a different model.


There was renewed interest in this tonearm when a supply of new old stock became available for 25 Euros at Hifi Planet in the Netherlands some years ago. Unfortunately, this supply is now sold out (more than 3,000 units sold!), but there still seems to be some new old stock in circulation (e.g. they periodically show up on eBay for around 200 USD) and some UK suppliers still seem have stocks, e.g. at Walrus Systems.

As I say, the review mentioned above raised some questions about the finish and engineering of the arm. In particular it noted that 'Lead out wire torque compromised the friction measurements, but despite this problem the values were acceptably low, and the magnetic bias system ensured that no further friction was added.' This DIY article aims to deal with this problem with the original wiring, particularly when this arm is to be used by modern cartridges which are lighter than the original Deccas it was designed for. The work was done some time ago, using photos taken on two separate occasions. There may be some gaps in my description, but I hope there is enough detail for readers to follow the upgrade process. 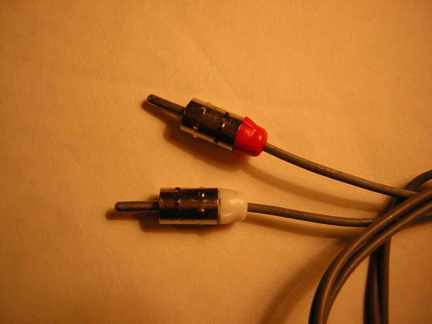 As you will see, a rewire involves an almost complete disassembly of the arm. One benefit of this is that it gives those who do it some understanding of the overall overall construction of the arm and the magnetic suspension of the unipivot. 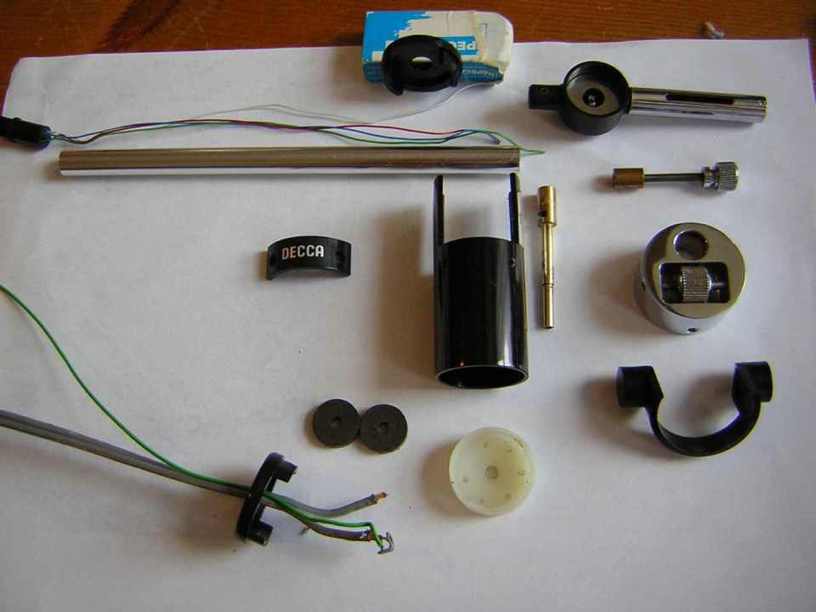 I did this rewiring job twice. Most of the pictures here were taken when I did it the first time, using high quality wire supplied by a specialist UK dealer. I forget the make. Unfortunately, this was insulated with fabric which frayed, both during the rewiring process and in use. So, I had to do it all over again! Here are some pictures, showing the main points of friction: both ends of the brass pivot. 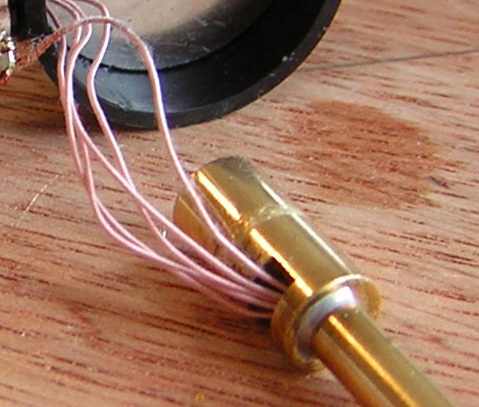 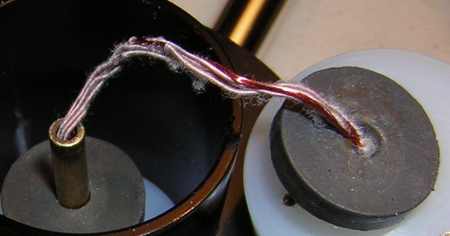 In the picture showing the complete disassembly, the counterweight section is also disassembled . This is not necessary for rewiring the arm. However, while you have the whole arm apart, you might as well also take this apart to see how it works and to give it a light lubrication. It also makes the armtube easier to handle.

The main point to note when starting the disassembly is that there are no half measures. Once you unscrew the tonearm wiring tags the whole suspension system comes apart. Be prepared for this and for exercising some patience in putting together again. If you want to replace the lead-out cable and plugs and don't want to struggle with the internal wiring, then just solder new wire to the connections, leaving the white base screwed down. Some users have reported good results with this simple mod. 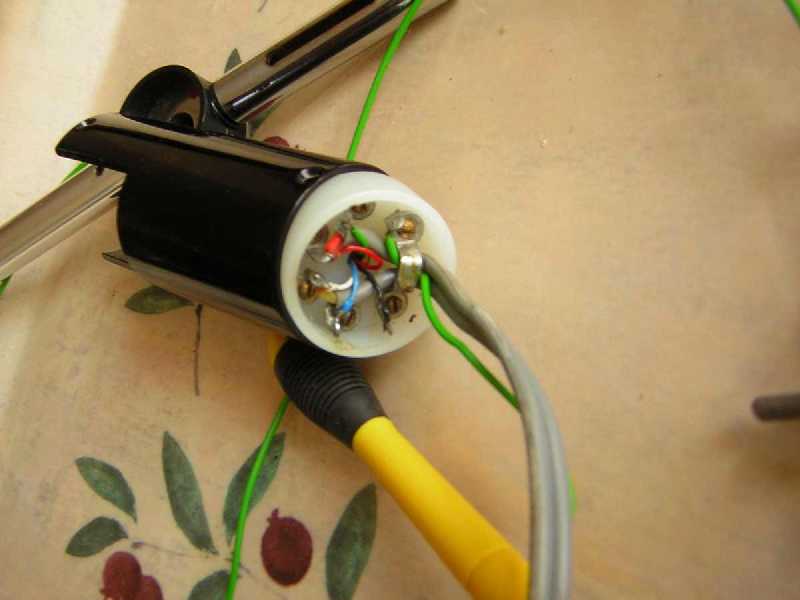 Base of tonearm, showing original wiring

Assuming you wish to proceed, remove the top and bottom covers and desolder the original lead-out cable. Then desolder the thinner internal wiring from the tags. Keep the tags and small screws in a safe place. 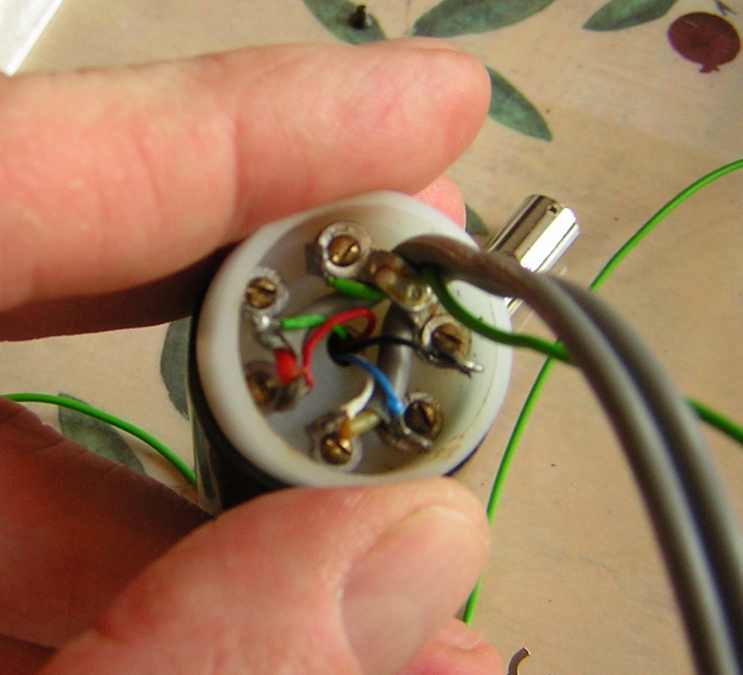 A closer view of the wiring at the base

Some of the pictures below show the cloth-insulated wire I rewired the arm with first. For my second and permanent attempt I used tonearm wire intended for rewiring Rega tonearms. This was a bit heavier than the other, but has worked well. If I recall correctly, you can retain and reuse the fine black earth wire. The other wires can be removed by pulling them gently out of the pivot assembly. 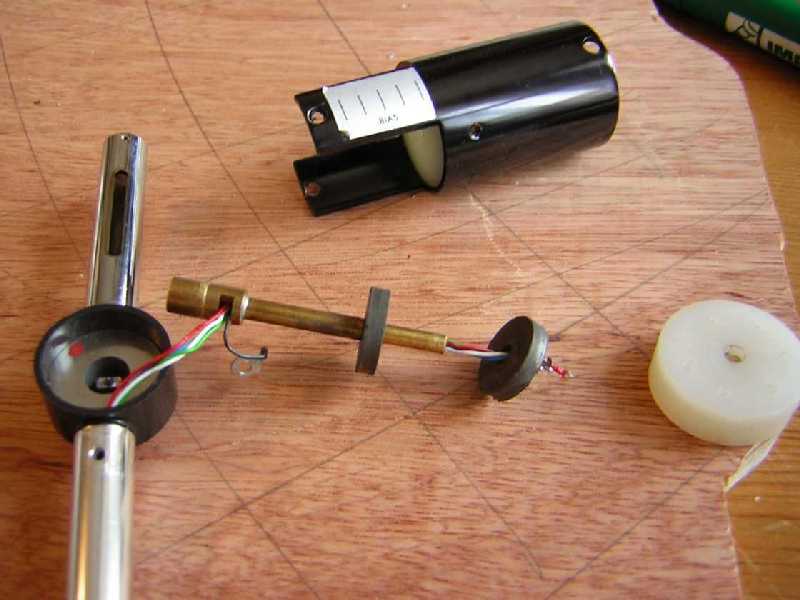 Pulling the wiring through the assembly

Now remove the small retaining screw to release and pull out the headshell plug, drawing out the original wires with it. 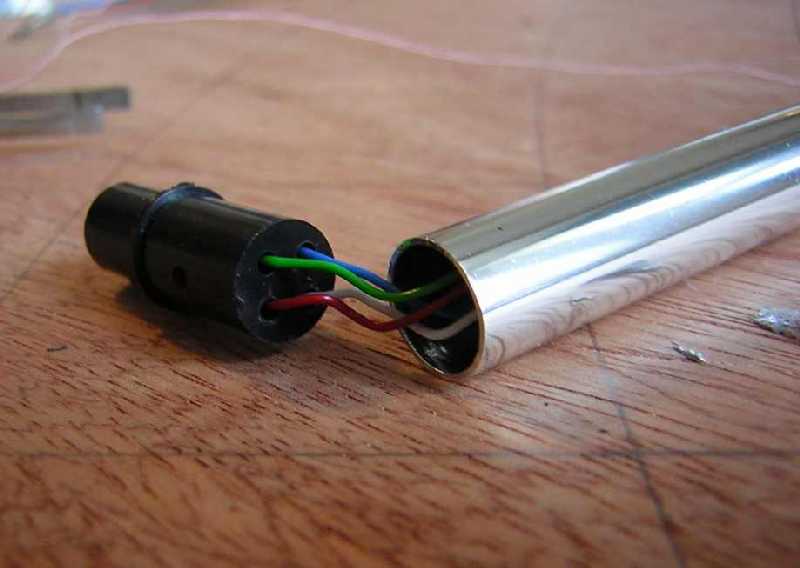 I could not find a way of rewiring the plug itself, so I left about 13mm of the original wire attached and cut the rest. I then soldered my new wires to these. The cloth covered wires were not colour coded, so I had to colour the insulation by hand. This is a hassle, so I recommend you use colour-coded wire. Any four colours will do; they do not have to be the standard red, white, blue and green (though this is ideal). 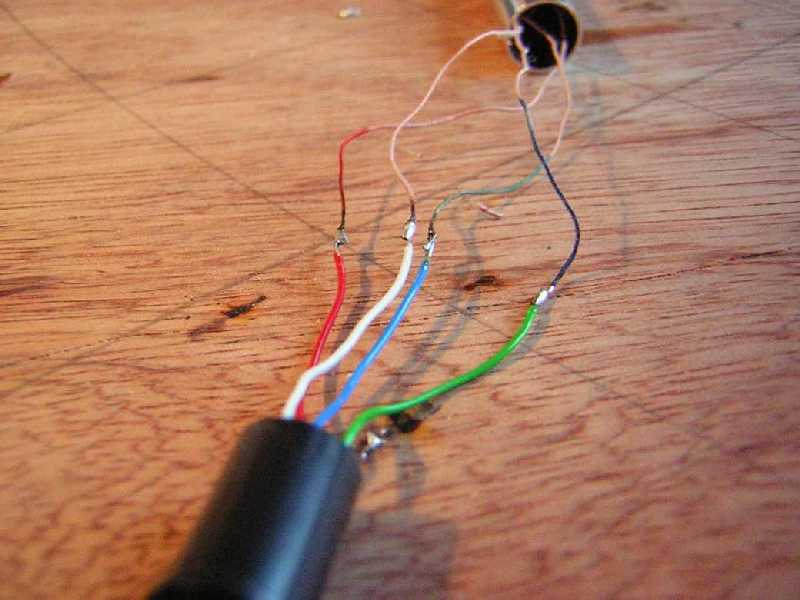 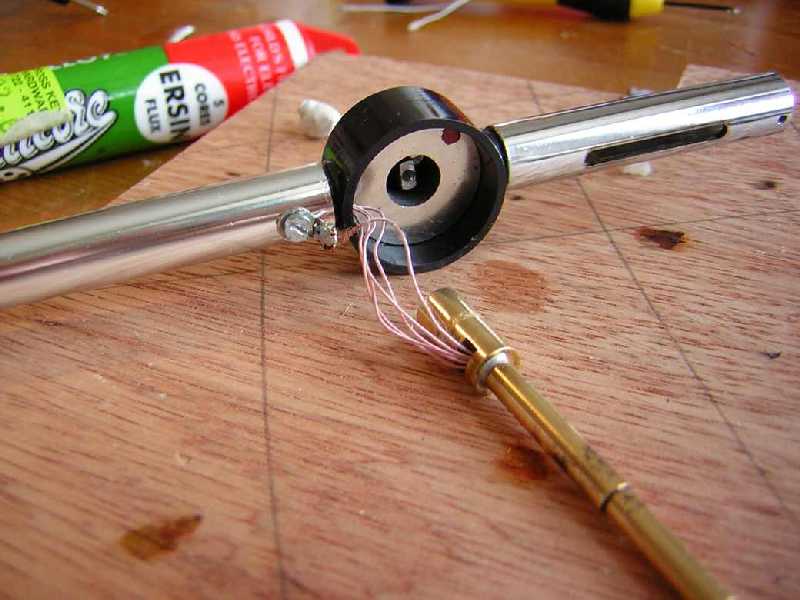 Feeding wire through the pivot 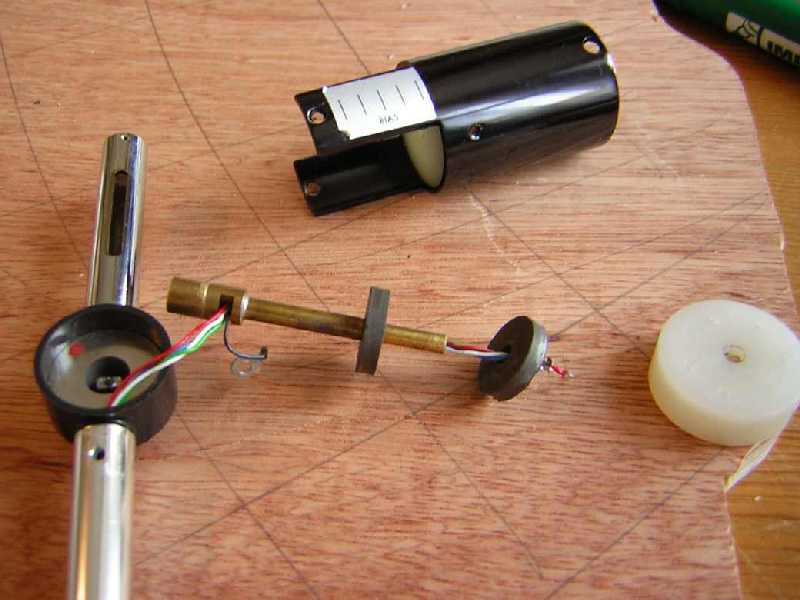 For my first try I held the white plastic base down, keeping the magnets from springing apart with a couple of small screwdrivers pushed through the holes in the column intended for securing the bottom cover, while first screwing on the tags. Then I soldered the new fine tonearm wire to the tags. But this did not leave enough space to attach quality tonearm cable as well.

So, when I mounted this tonearm on a Lenco GL75 I simply soldered the tonearm wire directly to tags under the chassis. This provides a secure place to attach the heavier tonearm cable. For those building a new plinth, another alternative is to attach this fine cable directly to phono sockets mounted on the outside of the plinth. This allows you to use your own preferred high quality cable to connect the deck to your phono preamp.

The process of mounting this arm to a deck is beyond the scope of this rewiring article, but there are some good discussions of how to set up this on on Lenco turntables on the Lenco Lovers website. There is a good thread under tonearms, called 'Installing and Setting up a Deca International Arm on a GL75'; don't be put off by the Decca typo!

This is not a sound quality review. One obvious reason for this, is that this arm was designed to be used with Decca cartridges, e.g. bringing richness to complement the sharpness of the Decca Gold. (Others suggest that it is best suited to the older Blue, Gray, MkV and MkVI. See the comments by R. A. Bruil at Soundfountain. This article is worth consulting for some clear diagrams of how the damping system works.

The rewired arm floats freely, and tracks well with Shure M75 and M95 cartridges at a tracking force of 1.5g. With these cartridges, it passed all the tracking tests on a 'Hifi Check-Out' record from 1967. I've mislaid my Hifi News and Record Review test record, so can't do more precise tracking checks at present. It does not offer precise resolution nor a focused soundstage, but it has a musical and organic character. It is much more adjustable than the Rega RB250 and, to my ears, sounds better too.

An advantage of this tonearm is that the headshell is removable and can be replaced with other Connoisseur headshells (though these do not have a built in spirit level). In the setup process I found that I could not get the arm to set the correct azimuth, i.e. getting the headshell and cartridge to rest parallel to the surface of a record, when viewed from the front. The balancing screw at the rear did not offer enough lateral adjustment to correct this. Strangely, even with incorrect azimuth the sound was acceptable, passing the crosstalk checks on the test record. However, I don't like having the azimuth incorrect, and the bubble level in the headshell is a reminder of this. To make the correct adjustment, I have found it necessary to remove the small screw which secures the cartridge plug to the tonearm and rotate the plug. The only problem with this 'fix' is that the plug pulls out when you change headshells.

Conclusion: A Tricky but Worthwhile Upgrade

This modification enables you to service the Decca International, understand how it works, and set it up accurately. Serviced and with new tonearm wire, the arm moves freely and makes a good option for replinthed idler drive decks. It is fun to use and good introduction to early unipivots. If you are lucky enough to have access to a Decca cartridge, this upgraded arm is surely worth trying.