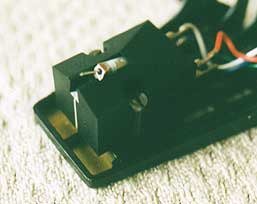 The first serious cartridge I ever bought was a Denon DL-301, back in 1988. Hairy business, as I decided to buy unheard, based on a review only (such stupidity), and the 301 would cost me about 50% of the price of my turntable.

Something went wrong with the order processing, and what I was sent was a DL-103D. Deeming this one oldfashioned, what with that 2.5g tracking force, I quickly returned it and eventually got the right stuff installed in my arm. That 301 blew away Denon's top model CD player fresh out of the box.

Just to indicate that Denon cartridges seem to have a low profile, but not quite deservedly so. With only a handful of types released in the past two decades, they built an enviable track record: the DL-110 is an excellent budget high-output MC; the DL-304 (now sadly discontinued) was one of the very best midprice moving coils; I still cherish my old DL-301, still sounding sweet, (there's a DL-301 MkII now in Japan!); and the exotic DL-S1 probably can hold its own against the Lyras and Dynavectors of this world, despite a very attractive price in Japan.

But enough: this is not about any of the above Denons. No. This is about the DL-103, the low-output moving coil Denon have been making uninterrupted, and unchanged, for the broadcast markets since, oh, 1962. That's 40 years. That's older than you, older than me. I know of only two other hifi products that come close: the original Klipschorn (now we take our hats off and bow our heads: Paul K recently passed away), and the SME 3012. Incidentally, to many the ideal arm for a DL-103!

This cartridge is also unique in the sense that its price never really rose with time. Even better, you can get it today, with careful internet shopping, for a ludicrous EU125: that's a lot less than what it was listed for in 1990, and it is less than what some 'entry level' MM cartridges sell for these days.

To twentyfirst century's eyes the 103 may seem a crude device: 2.5g tracking force, 0.3mV output, a compliance reminiscent of a train's suspension, and oh horror, a spherical stylus. There have been alternative versions of the cartridge over the years, with other stylus profiles and better coils, but these have gone long since and the the basic version still is with us. And despite its primitive specification, Denon claim an excellent production consistency, as demanded by ... broadcast people.

Could be. Handling this cartridge gives a certain kind of feeling, like you're handling a Tool instead of a toy. There's a minimum of packaging, no nifty screwdrivers, but a lot of manual (as cartridge manuals go), and an individual frequency response graph that is very flat, lacking the treble peak so often seen with MCs.

The squat black plastic housing has only right corners and straight edges, facilitating mounting and alignment. The only fly in the ointment is the lack of threaded screw holes, but you can't have it all for this kind of money. Mounting it in my arm wasn't half as dreadful as I expected it to be: the 103's body is chunky enough to afford good grip, and included is a sturdy stylus guard that remains in place during the whole process, while, for once, not obstructing it all. I did tracking tests with the HFN&RR record. The 103 cleared the +12/14/16dB tracks, and only emitted distortion in both channels during the +18dB torture. On its own a fine result, and even on that fourth track the cartridge pretty much sounded in control.

I didn't bolt this cartridge in the big turntable. I don't think anybody uses a Euro 125 cartridge with an arm like the SME IV, unless as a temporary measure. The same holds for the financial balance between cartridge and record deck. So using the ubiquitous Rega RB-300 arm was an obvious choice (if I wrote this in 1973 I would have used an SME 3009, OK?). I didn't have a cheap(er) matching turntable at hand, but at least I could employ my old GyroDec MkII, driven from a standard power supply instead of the QC.

You see, as opposed to 'modern' sanitised hifi components the DL-103 sounds powerful and enthusiastic. The midrange thrives on instrumental timbres that seem correct and that, simply said, are beautiful to hear. Drums are tight, dynamic, and explosive, and as such one full notch above what I'm used of more expensive cartridges like the MC25FL and the OC9. Brass, woodwinds and brass are breathy and natural. Only violins take on a papery quality that is indicative of the 103's limited treble resolution. Indeed, while its treble subjectively rolls off somewhat, it also attracts ones attention by sounding a mite coarse and obvious. Further, vocals are not entirely stable and solid, with sometimes a bit of sibilance intruding.

At the other side of the spectrum, bass is a bit lumpy and opaque. Yes, this is a characteristic of the Rega arm, but still ... Imaging is fair-to-good: pretty wide, there is some depth, but placement is a bit insecure. Nothing to worry about, as the global result still is essentially enjoyable and musical.

But we aren't finished yet. Somewhat unhappy with the architecture of my turntable, and inspired by Geoff's recent musings on tonearm termination, I cooperated with Gert Pedersen (of GyroDec modification fame) on additional damping for the Michell turntable armboards. Together with the DL-103 I got a first prototype of that: essentially a limited form of constrained layer damping in that the original massive aluminium armboard is pressed tightly onto a rubber layer, and then onto a second acrylic armboard. The Denon cartridge, with its unfashionably stiff suspension, seemed like an ideal candidate for testing this new arm support. 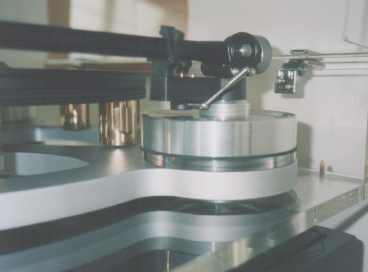 And it was ... Adding the Pedersen board to the equation, the bass got seriously more defined and tuneful, in the midband a layer of dirt disappeared, making the background considerably blacker. Imaging was tightened somewhat, and even the treble behaved subtly better. Or in other words: the DL-103 went from a decent cartridge with many good properties and a couple of mediocre ones straight to a good cartridge, period.

I won't exaggerate and say that the DL-103 makes me forget a good Euro 700 cartridge like the MC Scheu, but on the other hand, I really wouldn't be that unhappy if the Denon were the only cartridge I had. Because it reproduces music in a way that thoroughly makes sense.