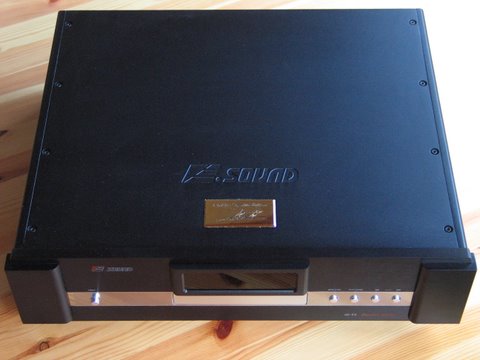 Expectation is a strange thing. I sometimes think I know what a component will sound like, just by the way it looks. It is difficult, for example, not to expect that something very big and heavy will sound big too. Especially bass has this strong association with big, solid, like-a-tank build quality. Well, sometimes expectations are met, even exceeded.

The ESound CD-E5 SE (Signature Edition) is a hefty player by any means. It is bigger and heavier than my power amp, and weighs 13 kilos. The casing is made out of substantial slabs of aluminium, the thinnest of which is the top plate, at 3 mm. Do the knuckle test on the side of this player and you'll hear a sound, or better the absence of a sound, that will make even high-end loudspeakers jealous. It really feels as if it is made out of solid aluminium. The side and front panels are 13 mm (half an inch) thick and the two front corners have extra chunks of aluminium attached just to make it all look even more substantial. The bottom plate is steel, and I did notice that the transport sits on an extra metal plinth for enhanced stability and isolation.

And it shows. Press 'open' and the tray rolls out with a soft, almost subsonic rumble that seems to come from deep within the machine. Nothing is flimsy with this player. All buttons have a nice solid action that feels very reassuring against the mass of this machine. It also sits very securely, with all that mass, on 4 nice rubber feet. Feature wise things are fine too, with RCA and optical digital outputs and single ended as well as balanced analogue out. To finish things off, it comes with the most solid and heavy remote control I've ever seen. It totally matches the player in build quality and was the object of jealous looks and admiring touches by visitors. 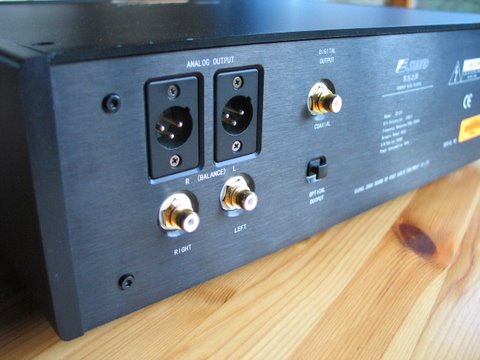 The manufacturer is East Sound, based in Hong Kong. The man behind this machine is W.K. Fung, an electronics engineer. The CD E5 is a development of the E3, and the Signature Edition is fine-tuned by Mr Fung himself, mainly by experimenting with internal cabling, most of which is Analog Research Silver SE.

The player was supplied to my by 'East West Audio' from Nijmegen, the Netherlands. This is a small company that imports and modifies high end audio products. They cover Belgium and Luxemburg too, by the way. Owner Ron Wevers is extremely helpful and enthusiastic about his products. He developed a modified version of this player which he claims is 'much better'. The current review sample will be modified and send to me again for a review of the modification. So, hopefully there will be a review of that player soon after this.

Inside the layout is exemplary: the transport in the middle, all power supplies are on one side and all digital and analogue circuitry on the other side. Mains is first filtered, then enters a rather big toroidal transformer and after that a number of separate regulators provide the power for the different sections of the player. The player uses a single DAC chip, a Crystal CS4390. That does mean that the balanced outputs are made from a single ended signal, but that shouldn’t be a problem. Component quality looks good too, with some Elna Starget elco's and many Wima film capacitors. Great care has been given to avoiding jitter, and a TCXO clock is used with a sophisticated clock distribution system. 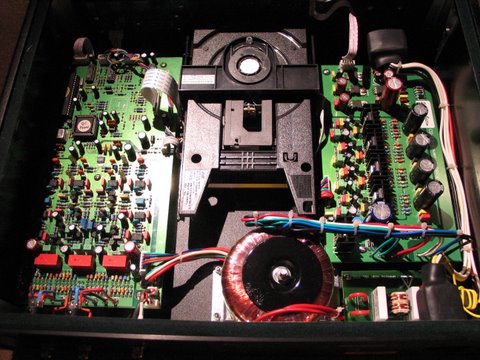 I gave the player about 100 hours on repeat before I started listening to it. It did improve a bit further after that, so it does take some breaking in. Nevertheless, from the very first moment I started listening it immediately became clear that the standout quality of this CD player is its bass reproduction. There's a solidity and authority to bass instruments that I haven't experienced before in my system. Bass lines are very easy to follow: no effort involved at all. And it goes deep too. This makes the overall sound on the warm side, but without being overly warm or compromising neutrality. It is a strange thing, actually, so much more bass than before, but without dominating the sound. It's just that it used to be booming away somewhere in the room, and now it sits firmly in its place. Finally the bass plays the same role as all the other instruments, no background player anymore but just as audible and localised as the rest. As a bonus bass is very tuneful and precise too. Not only quantity then, but quality too. With the 50's and 60's jazz recordings I usually listen too it is almost the difference between having bass and 'A bass'. Most other instruments have a lot more impact because of this too, and obviously it creates a large soundstage and a real feeling of physical presence.

All this space and foundation isn't ruined by the rest of the spectrum, by the way. The next thing that catches the ear, after the low end, is the treble. This is nicely detailed with a minimum of digital 'edge'. As it has good extension it does balance the bottom end rather well, producing an even overall tonal presentation. But it has to be said that the treble is also rather 'polite' and could be found to lack a little bit of 'spark' by people who like that sort of thing. I prefer my high frequencies to be a bit softer and therefore think that the ESound player is excellent in this respect. Plenty of detail, without pain. Spatially this player is projecting a wide and deep stage with good focus, but rather more distant than other players I've had. If you like a very forward sound you might prefer something else, but for my taste the presentation is just about right. It certainly has the advantage of never being overly aggressive and listening fatigue simply doesn't happen.

That fast, powerful bass also makes this player very rhythmic. The whole sound is driven forward by that bottom end in a very satisfying way. Other sources have to rely on a more aggressive sound to grab your attention or make things swing, but the ESound puts things on such a strong foundation that they just move by themselves. It will also never muddle up complex patterns or dense parts, allowing your ears to hang on to every clue necessary to decode whatever the musicians throw at it. 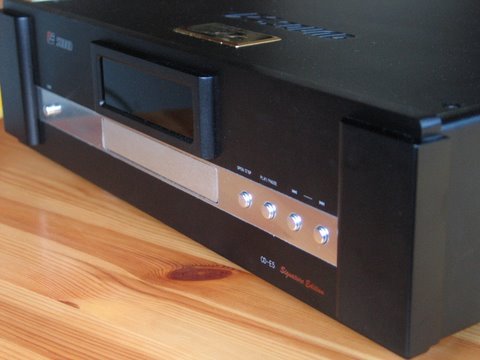 The middle frequencies are somewhat less ear catching, compared to the frequency regions either side, and could perhaps even be perceived as slightly understated. They do get an infusion of richness from the lower regions, and detail and focus from the upper spectrum, making them sound decent enough. It is just that they have a tiny bit less impact than the rest, making voices jump out less than with other players. It can hardly be called a weakness, but the mids do represent the player’s least talented region, perhaps. A consequence of this is also that centrally located instruments and voices are set back in the soundstage a bit.

As East West Audio have promised to send me the upgraded version of this machine, which is supposed to be better, it seems safe to air another small point of criticism. The modified machine needs something to improve on, after all. The upper frequencies can sometimes sound a tad rough, especially with lesser recordings. This leads to some flattening of tone, making sources that are close in space and frequency merge together from time to time. It also makes the sound from the sides of the soundstage be a bit more forward. It does contrast a little bit with the tunefulness of the lower frequencies. All in all the impression is one of a sound that is build from the frequency extremes, rather than from the middle.

But it all doesn’t really matter, as this machine brings so much drive and authority to everything you play on it that you can't help but like it. For me a sound like this is proof that bass is the basis of really good sound. Without a solid underpinning like this things just don't sound the same. And it works with all types of music too. It enhances rhythm and drive, brings warmth and tonal richness and gives instruments a real physical presence that cannot be created or simulated by anything else. An example is Mahler's 5th symphony. Played on the ESound the softer bits at the beginning really get this brooding atmosphere of 'menace about to happen' that was always lacking before. There's a strong feeling of contained power that will soon be unleashed upon you, even when the music is actually very quiet. Another example is piano, which sounds very natural and a good size bigger that with my own (modified Micromega Stage 3) player.

The rest of my review system comprised of a Django passive preamp, an Electrocompaniet ECI-2 amp and a pair of Dynaudio Contour 1.8 mk2 speakers. And I think you will need a strong amp and a pair of floorstanders like these minimally to bring out the quality of this CD player. Use it with a thin sounding amp and a pair of small stand mount speakers and you'll miss out on its fantastic bass. Good audio components should always be played at their strengths when combining with other units, at least that is my conviction, and this player should be able to show off its wonderful bottom end. 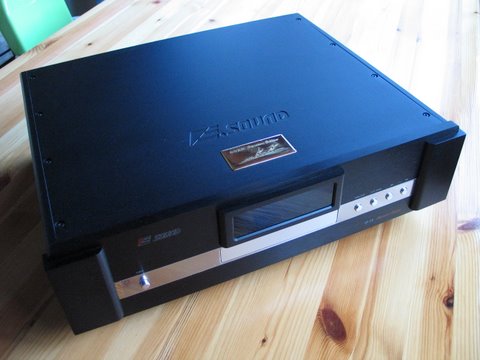 This really is an excellent CD player, especially for the money. Build quality is glorious. Its bass reproduction is truly impressive and almost makes you forget that you're listening to a digital source, or even a recording at all. There's a strong feeling of experiencing an actual performance. It is musical above anything else, but without sacrificing detail or neutrality. And it works with all types of music too. Just make absolutely sure to combine it with an amp and a pair of speakers that do it justice. I cannot wait for the upgraded version, believe me! Highly recommended.

Now available the review of a modified & tweaked version of this player, by East West Audio.