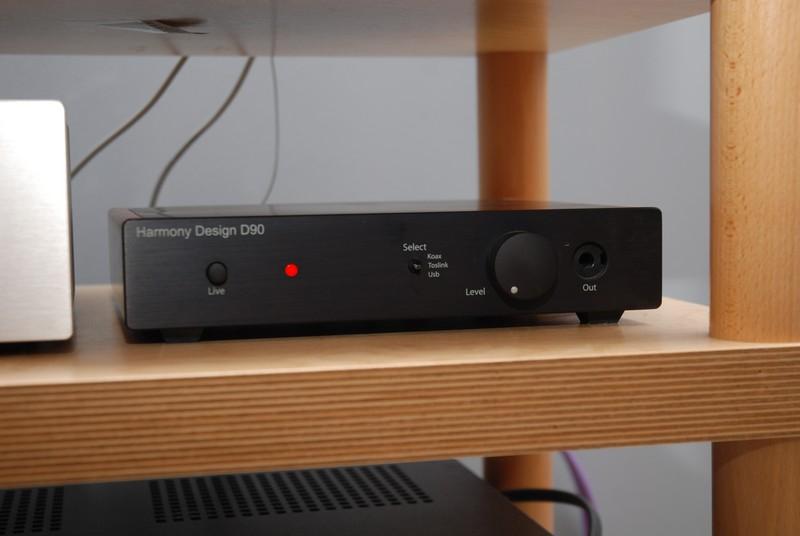 The modern music buying industry is, despite the recent vinyl revival, very much a digital thing. Whether you download files or still use them old fashioned silver discs (I never thought I'd be saying that) a means to convert those 1s and 0s into something the Mk1 human ear can hear is going to require some form of digital to analogue converter. Modern DACs have to be able to cope with multiple file types and data connections and be on talking terms with analogue signal your amp is expecting to hear. Combine that with continual evolution of filet ypes and the DAC manufacturer has got some work on his hands. Oh and it would be nice if it sounded good as a bonus

Which brings us neatly onto the unit we have here. Harmony Design hails from Sweden and the D90 is the latest iteration of their convertor. They also make a range of electronics including power amp, headphone amp, preamp, and phono stage so they are by no means one trick ponies. We've reviewed a few of the older versions of the DAC here at TNT but the range is new to me so I'll be running it against some of the standards I've had at home recently.

The D90 is a small neat design about the same size a a hardback edition of one part of the Lord of the Rings. The advantage here is that you'll not be bored of it half way through the second volume and Gandalf won't have to save you at any point from Goblins, Orks or other nasties. But I digress. It's solidly built with attractive wooden sides and can also be had in a silver finish if you prefer. Round the back there are USB, Toslink and Coax digital inputs and both XLR and phono outs. Power is the usual 220V kettle lead which allows you to run your preferred cables. Round the front there is a power switch with red power on LED, input selector and headphone socket. The version I have has a volume control but the D90 is also available without for a slight reduction in price. 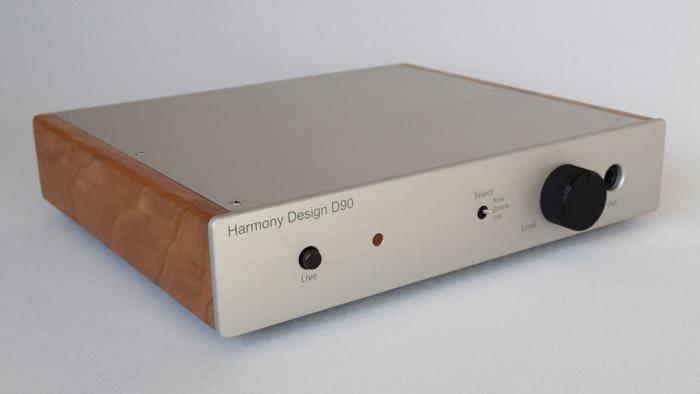 Inside there is a 32bit 192kHz AK4495 AVM DAC which systematically up-samples to 192kHz, switchable digital filters, a user defeatable mute circuit to protect your speakers of there is any doubt as to the digital signal integrity. There is also the possibility to increase the output if you're running very low sensitivity speakers and even adjust the brightness of the front panel LED. One final factory option is to have the headphone output adjusted to match any weird impedance headphones you may have. So what looks like a simple box is in fact a well featured unit. The digital board has even been designed to be easy to replace in the future to take into account digital format upgrades as I alluded to above. This is very much a product for the long run and I applaud the company for taking such an approach rather than just obliging you to buy the next model when another format appears. 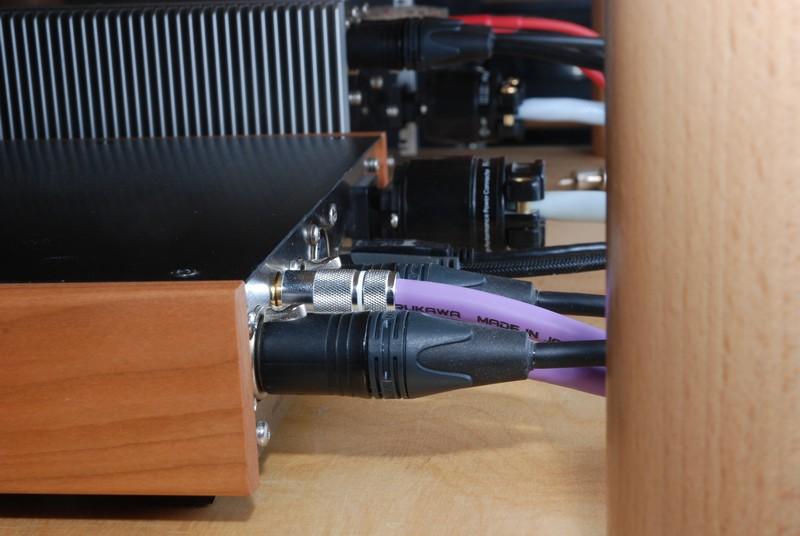 I ran the D90 with the Canary CD300LV as a transport on Coax, my Bluray player on Toslink and this very laptop I'm writing with (Windows 10 running Foobar 2000) for USB. Matthias from Harmony supplied me with some of his cables where required as I don't normally run XLRs. He must get the award for most honest cable manufacturer as he admitted they weren't the world's best cables but that they were at minimum neutral sounding. How very refreshing! The back end of the system was the Canary CA608LV and Living Voice IBXRW3s for the majority of the time with Harmony's own A90 power amp making a guest appearance for some of the review period. All mains cables were Supra Lo Rad with Supra or Furutech IECs. My Naim Cd5i was on hand for a lower end comparative test.

As I had the Canary CD300LV in house I took the opportunity to use it as a transport and compare the D90 with the onboard convertor and output stage. So I'm putting a £1295 DAC against the onboard DAC in a frankly stupendous £7500 CD player. Possibly a bit unfair and I'm going to end the suspense straight away. The Harmony isn't as good as the turbocharged Canary. The Canary is better in every aspect be it detail, dynamics or staging. On Gene Parson & David Hayes album the acoustic instruments sound more real and the performance is more intimate. But the Harmony Designs is extremely pleasant and musical and we shouldn't forget it costs about a third of what the modifications alone done to the Canary cost! Which bodes extremely well for some more real world comparisons with machines in its price range

Speaking of which I decided to pit the D90 with a cheap Panasonic Bluray player and an even cheaper fibre optic cable against my Naim Cd5i using CDs. Harmony points out on their internet site (which is in Swedish for the most part - a bit more info in English would be nice even if Google Translate came to the rescue here) that the Toslink connection system has been vastly improved and should no longer be considered a "poor" input. To prove them right the Harmony then ruined my day by showing up what's wrong with my beloved CD5i. The D90 manages to put in a very well timed performance giving away only fractions in the drive stakes to the Naim. Where it really scored was definition be it at either end of the spectrum and what appears to be a an entire level of higher frequencies and ambiance that the Naim just doen't bother with. Take for example Joe Satrani's "Dream Song" from the album Black Swans and Wormhole wizards (last wizard reference in thes review - promise!). The Naim plays it well enough - you can guess the Wah pedal that Joe uses is more than likely a Vox and the rest of the track is a good bit of fun. The Harmony has you convinced it's a Vox and brings forth the phrasing in the guitar playing - there's a lot more feel on the track than most people normally give Satriani credit for - and the tone of the drums that previously had been glossed over. Similarly when listening to Elton John's Your song the Harmony scores over the Naim in allowing you to better understand the lyrics and the way Elton sings them. It's such a well known song that it can be a bit of a shock to discover new elements to it and the D90 shows phrasing in a way I'd not really experienced since the departure of the aforementioned CD300LV. The orchestra is also more controlled and musical at the same time. Orbital's "Girl with the Sun in her Hair" from Insides was similarly entertaining. The synth sounds are more organic, the drums sound more like there's a live drummer and each instrument in the dense mix is better defined, easier to follow and more precisely placed in the soundstage. As I alluded above from a timing point of view it's as if the Panasonic/Harmony combo leaves the music just enough time to happen where the Naim just wants to get on with the next note. I can understand why people are drawn to the Naim sound but in this case it really was a no contest win for what the D90 does.

As I had the Bluray player connected up I decided to watch "The Art of Flight". For those who've never heard of it it's a snowboarding film from Red Bull Media House and combines amazing images with some fabulous music from the likes of M83 and the Naked and Famous. It's a film I've seen many times but the D90 took events to a new level of clarity of rumbling lows and highs without harshness.

Running the D90 via USB is easy and the drivers fire up immediately. This setup brings about similar results to the Toslink input. Play Madonna's Immaculate collection and the Q Sound effects produce wide soundstaging way beyond the width and forward of the speakers. Robert Glasper's Black Radio Vol 2 was equally impressive with the vocal warmups that make up the opening tangibly placed in the stage. The D90 also scores points here with the warmth in the voices - there doesn't to be appear to be any obvious digital harshness with an equally gorgeous electric piano part. Drums have impact but even played loud have just the right amount of realistic bite without me reaching for the volume control

This would be an appropriate point to talk about the volume control as whilst a lot of the time with the CA608LV integrated I ran it at full tilt it also allows the D90 to be used with a power amp in a simple high quality system driven by a computer or CD transport. Harmony sent me their 2x50W A90 power amp to test and whilst it merits its own review suffice it to say the combination works very well together and if you only run digital sources would be a great compact setup without the need to run a preamp. I could complain that there is no remote but as I don't normally use one on my Canary amp it would be a tad cheeky to complain about the lack of something I virtually never use.

I really like this DAC. It's well made without going to the excesses of machining from billet aluminium or the addition of gold feet for extra High End Silliness points. It puts in a very musically satisfying performance without favouring any one style and wrought improvements on a cheap Bluray player that were extremely impressive. Combine that with the future-proofing option and the fact that it doesn't cost the earth and it makes an extremely compelling case for itself.