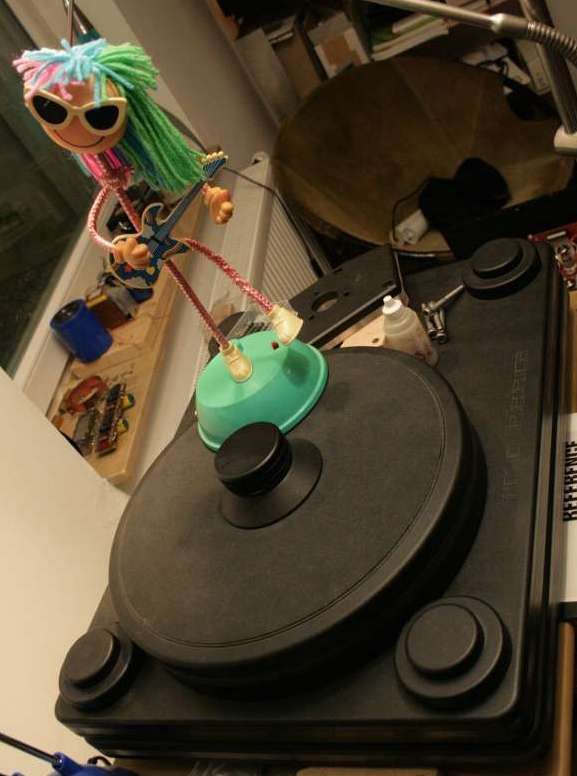 This is not the usual test report, where I got a review sample borrowed from a distributor for a few months. This is rather the aftermath or homage to a worthy component, which I just resold. Yes, you have read it correctly: I sold my Kuzma Stabi Reference turntable three weeks ago, but I am still so impressed by its well balanced qualities, that I feel obliged to tell all fellow audiophiles about its qualities.

The Kuzma Stabi Reference turntable is now on the market since around 1990, and I wonder if there are any production changes inside. At least, on the outside, it always looked the same to me. My first encounter was indeed in that year 1990, when a friend of mine bought it, of course as combo with the matching Kuzma Stogi Reference tonearm, and had it running next to a Platine Verdier/SME3012R combo. Running a Garrard 401/SME3012-2 at that time, I was impressed. Both were considerably better than my Garrard, and I slightly preferred the Kuzma, like my friend did. He sold the Platine later to another friend, locally. Then, in 2001, another friend bought such a Kuzma combo s/h. I visited him, and was impressed again. When there was a change due at my friend’s place, I took the chance and bought said combo, this was last year. I had to sell my Pluto 10A super deck four years ago, and since, was missing something. Did the Kuzma fit the bill? Wait and see. 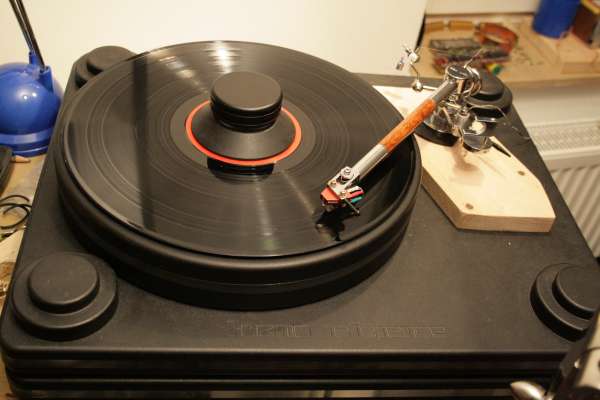 From construction, the Kuzma Stabi Reference tries to be everybody’s darling: it is a high mass deck, with its 40kg net weight, it is a suspended deck – fuss free heavily damped, it has a heavy platter – 9 kg. It uses aluminium as well as acrylic slices as material for platter and subchassis and base plate. The bearing is of inverted type and consists of a sapphire ball and a plastic counter part. The motors – there are two of them working together in a Voyd turntable style configuration – are the same Philips Airpax 110V AC motors like used in Linn and Simon Yorke decks. They drive the subplatter by belt, and are controlled by a separate electronic supply, where 33 and 45 revs are generated. The speed can be fine regulated by DIP switches in the power supply. A heavy textile mat soaked with some damping substance is glued on top of the platter.

The tonearms can be mounted on exchangeable tonearm boards, with the standard is that you buy or use this deck with its partnering Kuzma Stogi Reference tonearm, a heavy, Linn-mount compatible tonearm with medium 12g effective mass. The four springs of the subchassis can be adjusted for tonearms with different weight, and allow even heavy beasts like Micro’s Max 237 (2kg) or light constructions like my Pluto 2A tonearm. One note about adjustments: As the two motors are attached to the base plate and working opposite to each other with the suplatter between them, the base plate must be 100% level first, before adjusting the subchassis to level, in order to let the belt run in parallel to the subplatter.

A heavy clamp is provided, which can be screwed on the threaded mid-pin. Did I say the Kuzma is perfect from construction? Over the years I had about 50 different turntables in my home, and this deck is the first and only one with no fault by construction.

Although the Kuzma Stabi Reference is often sold and used with its matching Stogi Reference tonearm, this is not an optimal combination at all. In fact, the Stogi is a limitation of the deck’s qualities. This does not mean, that the Stogi is a bad tonearm, in my opinion it is on SME V level, and even comparable in sound with the SME V. Some readers may now sense from the last sentence what happens when Stogi and Stabi are working together: The sound might get a bit boring and lifeless depending on the cartridge. It is OK as long as you have a say a moving coil cartridge like Benz Glider with glorious midrange, but when you try to max out treble information with a Lyra, the Stogi simply blocks a big lot of these treble details. The Stogi’s bass is OK, and its dynamics too.

I tried the Stabi Reference with SME M2, Schroeder-DPS, Fidelity Research FR-64S, Micro Max 237, Pluto 2A. Most of the time I had the FR-64S playing. The fast and dynamic FR tonearm matched very well with the Stabi. The others are also good matches. I had the Schroeder-DPS only for one day (I was doing a tonearm wire repair job for a friend), but it was long enough to confirm that it worked excellent, too. The Pluto 2A I bought very late, and it replaced the FR-64S, stepped all over it virtually, so I sold the FR.

I think the Stabi Reference is too balanced for overdamped tonearms like Rega or SME V for the same reasons like the Stogi is not optimal partnering it. 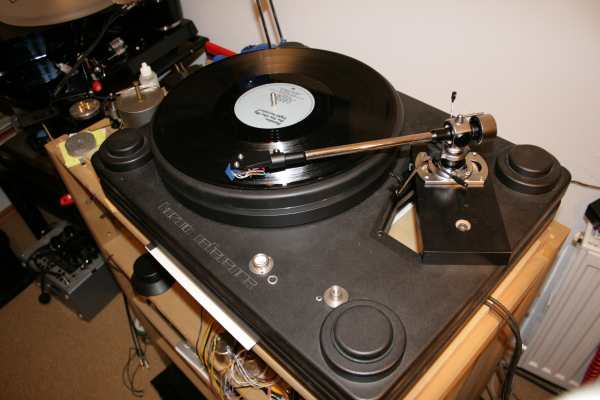 Putting the Kuzma in a stereo setup, it is holding back its sonic signature. It is as balanced as can be. Think a high end CD player with tube output stage, and you get an idea, of what I mean.

When compared to other decks, it can be described like that: Incredible bass extension with a natural fullness, which lets most other decks sound thin and sterile. Then a silky midrange, with a very good transparency and natural tones adds seamlessly. After all, a well behaved and fine detailed treble region follows. Timing is always spot on, regardless which type of music is playing. This is a quite rare case, where a deck is not restricted to or favouring a certain music style. I played John Coltrane, Orff’s “Die Kluge” (“the wise daughter”), piano concerts, Tori Amos, and lots of other, and the deck played music with all of them.

Comparing to Scheu No.2 turntable the Kuzma was simply more balanced overall, when the Scheu was just improving in the bass region over its predecessors.

Well, now comes the bill: does the Kuzma Stabi Reference make me happy that I forget the Pluto 10A? … Err, Hum, … No. …………. Instead I bought a sibling of the Pluto 10A, the Simon Yorke S4 – those not knowing the history of Pluto and Simon Yorke companies have to be told that these companies once had a joint venture in the 90ies for Mark Levinson’s Cello company, and afterwards Pluto began building decks, and Simon Yorke began building tonearms – and I had some weeks modifying all the faulty design things out of the S4 deck. In original condition, the Simon Yorke S4 is classes below the Kuzma, and its exemplary speed and dynamics are just a faint hint at its full potential, but after all faults addressed, the potential developed and the Kuzma had to go. After all the modifications (bearing, drive medium, motor supply, platter mat) the S4 had more transparency, better bass power and texture than the Kuzma, but hey, such a turntable you can buy nowhere. You have to do that on your own.

The Kuzma Stabi Reference you can buy for way below 3000 EUR on the usual second hand market places in Germany, without tonearm. Now this is what I call a bargain.

This is simply the most balanced, most perfect, non-fuss hi-end turntable I've ever come across.