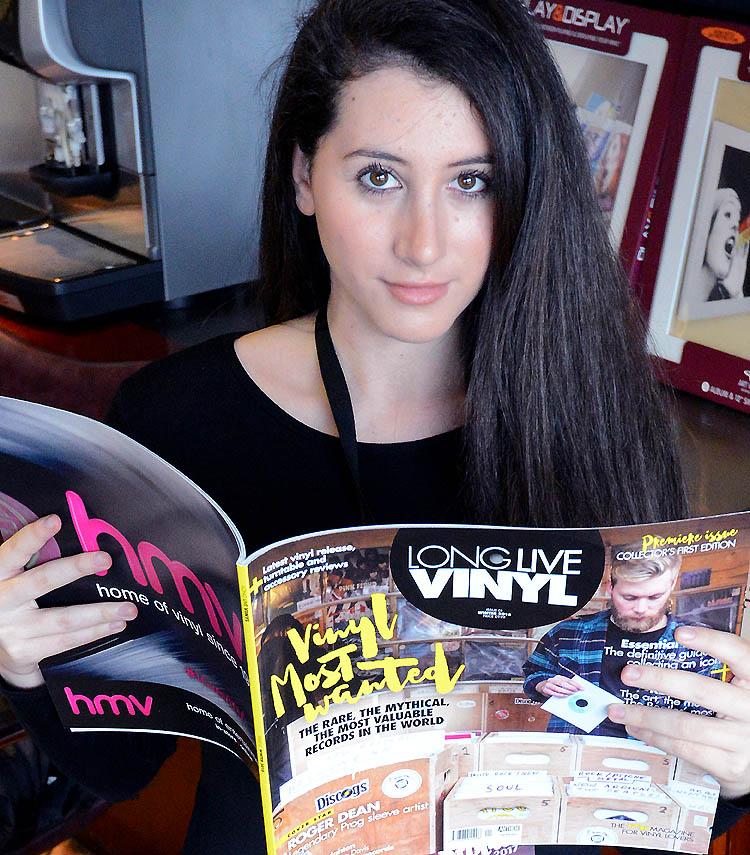 This is a luxury magazine, reminiscent of the best major tour concert programmes, beautifully printed and in a 12 X 12 inch LP sleeve format. 'Long Live Vinyl' equals specialist fine-art photography journals for production values of this physical object in an era of online reading. Just as the vinyl LP is a unique tangible experience in an age of audio streaming, 'Long Live Vinyl' is a multi-sensory oasis in a universe of screen-scrolling, if bought in its physical form.

The 12X12 (305mm X 305MM) format of the first is non-standard for printers and so will contribute as much to costs as the lavish glossy and laminated textures throughout. A tenner seems a fair price to pay for the object, but what of the contents. Presumably the publishers have thrown as much as they can at the first issue, and subsequent issues are available online and on what appears to be standard format paper. Doubting whether it would survive, this review was held over until several issues emerged. The choice of feature article subject matter is perfect for leafing through while enjoying the relevant albums spinning on the turntable. A Roger Dean interview accompanies beatifully reproduced examples of his iconic 1970s LP sleeves for Yes, Budgie and numerous other luminous progsters.

However, even in this otherwise escellent feature piece on Roger Dean, the tendency to assume the first few google results are facts, mars the sidebars. An example of poor fact checking is the statement "Focus' Focus-X album, released in 2012 with its distinctive Roger Dean cover, has just been released on vinyl".   Funny, 'cos I bought my (signed) vinyl copy in 2012 when it was simultaneously released on all formats. Research by search engine, without proper fact checking leads to repetition of such innacuracies on blogs and forums and we should expect better of paper publishers of premium product.

Although this journal content seems superficially embedded in the vinyl zenith of progressive rock, it seems aimed more at the newcomer to vinyl playback in the home. In this it mostly succeeds, employing Andy Price (of MusicTech) to explain the basics. Like many vinyl neophytes, the authors use the new plural vinyls, rather than the traditional collective plural for vinyl LP's; like the xccollective plural for 'sheep' is 'sheep'.

"What on eart is the Old Scribe ranting on about now?", Demand the Plebs' Chorus, stage left, "Is this 'TNT-audio' or 'Farming Today', or is he just on an old pedant's rant about grammar?

Check out the Pedant's Corner (below) for more linguistic pedantry. It is curious that the collective term for LP's has become the material from which they're manufactured. In which case 'Vinyls' might be appropriate if they're made from different polyvinyl compounds. In Old Fart City, inhabited by the Old Scribe, the term Vinyl LP's refers to round black discs from which music is reproduced, and Vinyls refer to adhesive decorations or wraps for cars, vans and trucks. Long Live Vinyl containsd many adverts for record shops (hooray) and new releases or vinylophile re-releases.

The cover price might seem high for those used not to paying for content online, it represents good value for the production qualities it demonstrates, if it also manages to match that quality with equal quality of information and writing. While many would-be contemporary vinyl buyers complain that £15 upwards is too much to pay, those of us who remember the vinyl heyday (until the 1980's) know that we had to work twice as many hours to pay for an LP then as they would today on average wages. The quality of modern pressings is far superior to the oil crisis and share price driven flimsy slivvers of mostly recycled vinyl foisted on the record buying public in the 1970's and 1980's. The premium nature of this publication's material values precisely matches the premium value expected by purchasors of expensive vinyl reissues at a time

After reaching its nadir in 2007, when only 205,292 vinyl albums were sold in Britain, the format has been steadily rebounding, thanks in part to the popularity of guitar bands, traditionally associated with vinyl, the launch eight years ago of Record Store Day and the dogged determination of independent record shops. In 1991 for most of the planet and 1992 in the U.K., it became almost impossible to buy vinyl, when high-street giants HMV and W. H. Smiths stopped selling vinyl, to force their customers towards more profitable overpriced CD's (£14 for a CD when vinyl was priced at £5-£7 despite higher production costs for vinyl than CD). Internet shopping did not exist, so music lovers would clamber upstairs at Nottingham's Selectadisc or drive 120 miles to Cob Records in Porthmadog to get their fix.

"When CDs emerged the management thought it was a passing fad", said one independent record retailer.

In December 2016 sales (in monetary terms) of vinyl discs exceeded that of digital downloads for the first time since digital downloads became possible. This would have seemed so unlikely 25 years ago, while global entertainment corporations and international retail groups determinedly tried to exterminate the vinyl gramophone record. Many bands, especially those of the jangly indie guitar variety, remained loyal to the format, offering fans limited edition vinyl pre-releases, for example, by U.K. provincial indie and dance labels. This is a rare example of consumers and the maverick small enterprises defeating the big players (record labels and record chainstores), refusing to accept profitable mass mediocrity and demanding diversity of taste and quality. The music lovers' (traders and consumers alike) attachment to vinyl records of splendid individuality is parallel to Italy's slow food movement.

The broadsheet Sunday newspaper colour supplements started printing articles on the vinyl revival, and any entrepreneur could spot that people who pay for their recorded music want vinyl, so eventually even the half-wits running HMV are trying to jump back on a bandwagon they'd earlier tried to crash. Going bankrupt was the Karma payback for HMV dropping vinyl and they're being steered to recovery by restructuring specialists Hilco. They had lost their connection with music as much as with vinyl.  [use HMV Derby closure] Thats big capitalism for ya. Undermine the independent stores with cheap prices (3 for a tenner) and then stop selling when the independent stores are all closed down and the grass roots demand feed is gone.

Local independent record shops have always been the top place to loiter and listen. Magazines and music papers have always been the medium to generate interest to prompt an extra visit to an independent record store. Your Old Scribe popped in to Vinyl Lounge in Mansfield this week, having reserved a new limited edition reissue. Despite being in a 30 minute lunchbreak rush, there was time for flicking through some of the racks and 3 more new LP's and a 12" single joined it in the bag. The many advertisements for independent record stores in 'Long Live Vinyl' are testament to the resurgance of the genre. The inclusion of coffee bars renders that primal activity, loitering in record shops to be a much more civilised activity that the days of a can of coke and a roll-up. The plush production values of 'Loing Live Vinyl' are a metaphor, or even an analogue, for this progress.

Long Live Vinyl is another peice in the jigsaw of the return of the vinyl LP record as a premium object of desire. It meets its intended goals and fits the new vinyl market, rather than the charity shop scourers and record fair addicts. The new generation of vinyl junkie wants good coffee and somewhere to sit to sustain their record shop loitering. Propping up the counter, in an unspoken hierarchy of proximity, clutching a baccy tin, went the way of Disc and Record Mirror. Cluching an espresso while perusing the racks is the domain of the Long Live Vinyl reader.