The Naked Truth (TNT) About the Tracking Angle

Like everything done by man, the phonographic reproduction of music is far from perfect. From the beginning it has been plagued with limitations and failures. As time has passed, matters have improved and today a high level of sound quality is possible.

“In a certain sense the CD was not necessary (Thorens)”.

Let's be clear and say straight away that the CD was part of the late 20th Century digital age which has changed the world in so many ways to the great benefit of everybody (hum !), and certainly business has taken the opportunity to make hay. Anyway, for the moment, vinyl seems unlikely to disappear thanks to its obvious aesthetic qualities.

The CD was launched in 1983 and just four years later sales were shared 50/50 between CD and vinyl. Originally, the CD was expected to kill vinyl music quickly. Today one can only wonder if vinyl will win the final battle as CD competes with other digital music formats (Streaming, downloading and other dematerialised music). Vinyl could survive due to the pleasure of owning the physical disc, artwork and the playing experience, to the great satisfaction of many knowledgeable existing users. CD as a physical medium has its own beauty and rationality as an alternative to the consumer dominated world and as long as it keeps that it will be enjoyed for its own benefits.

A well-known problem with vinyl music reproduction is called “Tracking Error” which affects “the Tracking Angle”. Tracking Angle is a concern for everybody who wants to play records as we all need, at some point, to set up the cartridge on the tone arm. To do the job properly we need the help of a so-called “Protractor” (or adjustment card, lens, alignment gauge etc.). This set up process varies a bit from one manufacturer to another, but the main problem is elsewhere.

From the 1930s, many mathematicians and engineers have studied all these problems and a huge amount of literature exists out there. Calculating the best cartridge alignment could involve the use of several books. Some names are famous: Baerwald, Löfgren, B.B.Bauer, Stevenson and others. Remy Lafaurie, Dennes and many more are more recent names. Even now enthusiasts spend endless time discussing the merits of each method. 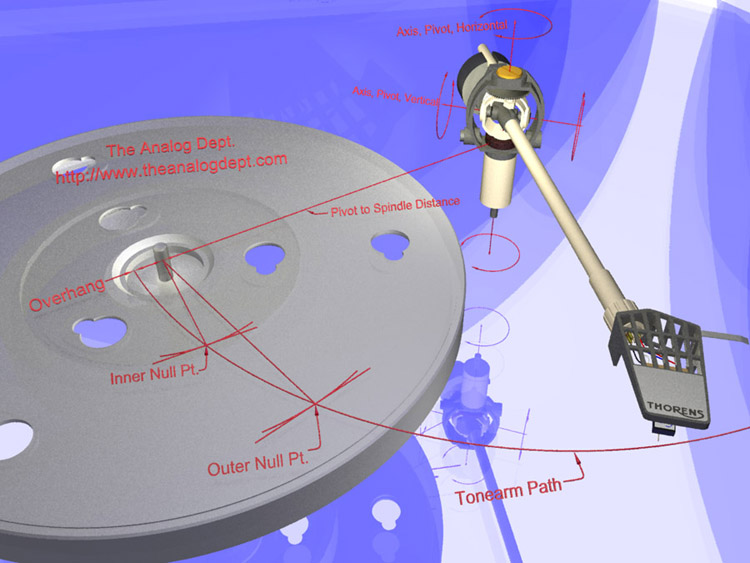 What is the Tracking Angle? 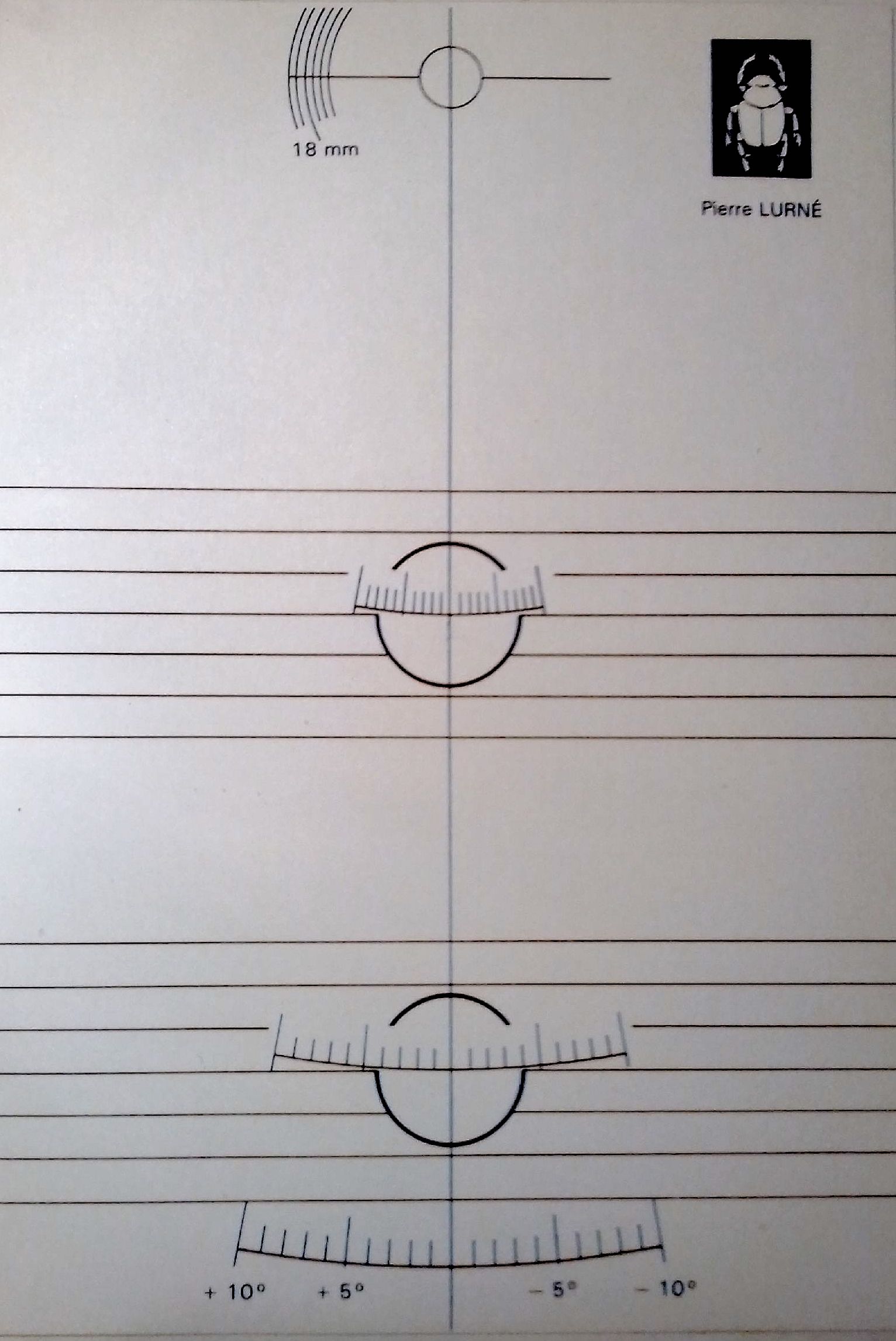 Depending on the music's length, analogue records never end at the same distance from the label in the centre. Consequently, if the Tracking Angle adjustment is alright for the typical record, it is perfect for none of them. Thankfully nobody is likely to feel the need to change the Tracking Angle for each record! We have to be happy with an average and it's not the only compromise.

Even today, though the Hi-Fi golden age is over, many aficionados keep on discussing and arguing about the subject on the web. Each person advocates his own best Tracking Angle solution which is considered essential to the music quality. Incredible amounts of time are spent in performing the adjustment again and again though everyone knows it is an approximate adjustment anyhow. At the same time many more important problems are ignored or the user is oblivious to them, and this includes some professionals. This is another story so let's focus on the Tracking Angle today.

Discussions about Tracking Angle have never ceased for more or less 80 years! So much wasted time! All this for Nothing! Nothing! Why do the arguments carry on? And here we get to the more interesting part.

Caution: There is nothing wrong in studying these geometric problems, and many believe that it is the key to any musical quality. They spend hours with it. Don't do it, the problem is definitely elsewhere.

The basic mistake is that we presuppose the cartridge is perfect and it is NOT!

Exactly like everything else in this world, “perfection does not exist”. Once again, everything done by man is subjected to the so-called “Mechanical Tolerances”, or “Mechanical margins”. This means that any dimension, any length, any angle is never identical from one item to another. There are always tiny variations which come from a thousand reasons: the machine tool, its quality, its adjustments, the tool wear, the worker's skill, the temperature and so on. A dimension of, let's say, 20 mm does not exist. Maybe once every thousand times a part will be made identically to another. Instead we should state a manufacturing precision, for example, 20 mm + or - 0.1mm (one tenth); 20 mm + or – 0.01 (one hundredth). Precision costs, takes time, requires more attention, needs more sophisticated machines and the number of rejected faulty parts increases all the time. It's the same for hand made things. Moreover, the larger, or conversely the smaller, the part being made, the smaller the precision. That's easy to understand. So, try to imagine the Mechanical Tolerances of a cartridge! The stylus is minute and made from the hardest material on earth and only its very tip runs along the groove.

In addition, the shapes of the better styluses are difficult to manufacture as they have no axis of revolution, which is the case with a cheaper conical stylus. Inevitably poor precision is the rule. Making AND assembling can create problems. It's important to understand that the Tracking Error is already there and will increase during manufacture: when the stylus is mounted on the cantilever; when the cantilever is set into the suspension; when the whole is fixed on the cartridge body and when the user himself screws the cartridge under the head-shell of his arm. All these little errors of size, angle, positioning in the cartridge randomly accumulate and, sometimes, can even compensate each other! Who knows? Good Luck!

In theory the tracking error could be limited to 1 or 2 degrees. This is extremely small with the dimensions involved. Unfortunately it has been demonstrated above that the Tracking Error can reach much higher values in the real world.

One day I asked a cartridge manufacturer friend of mine, “What is the average error?” After a little pause he said, “Degrees, three or four? Or ten?! It all depends!”

Manufacturers cannot easily keep the necessary precision under control. Some of them even accept that the product will vary in quality and select their cartridges from good to bad and price them accordingly. You always buy the same basic cartridge, but the better they are the more expensive. This is usual practice in the business.

With all these variables and in in all these conditions, I hope you can better understand why spending a lot of time and attention in adjusting the Tracking Angle at home is likely to be fruitless. Laboratory quality instruments would be necessary to properly fix the problem, but audiophiles seldom have such equipment (Oscilloscope and test records as a minimum). This practical reality shows that all excess of attention in mounting one's cartridge is NEVER JUSTIFIED. A waste of time! A fight for nothing! The error is very small and difficult to adjust, but we do our best. At the end of it all we might realise with all the attention to detail, the error can be 5 or 10 times worse! Don't despair! Instead let's take it as a welcome opportunity because there are many hopes of improvement with such high values. A kind of paradoxical good news, but never forget that your protractor is nothing but a ROUGH GUIDE.

There is room to improve the situation and the ear proves to be more tolerant than we thought. So what can we do? How to take advantage of the above facts?

First of all let's relax. Stop going crazy with all these numbers. Let's keep on adjusting with our protractor, but consider it as an approximation, a first approach. Then, listen to the music at length and in peace. Play several records and take your time. Make a few adjustments. Some people say “Twist the cartridge”. A tiny bit of course. Try right and left. Listen again. On quality audio equipment a “sweet point” will always appear. High fidelity is a game to be enjoyed and also trial and error.

Listen to precision, dynamics and the position of the musical instruments in the sound stage. Use live albums with minimum recording corrections. Some test discs can help.

Many people say, “I listen to rock music and I don't care about those problems”. This is NOT CORRECT! In ALL cases a good adjustment is highly recommended for both music quality and RECORD PRESERVATION.

Take all this calmly. Now you know that playing vinyl can be more tolerant than you thought and why. Good news. Don't be scared of it.

P.S.: Next time we shall study the straight line/tangential arm case.