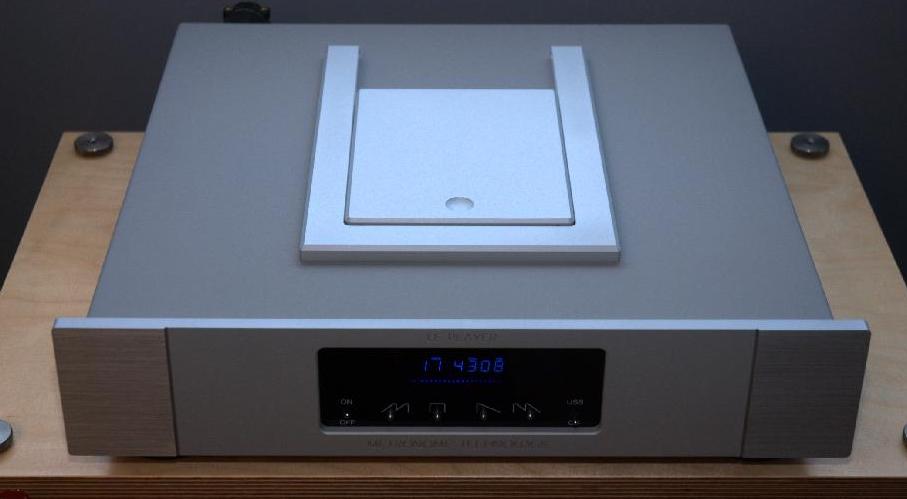 Le Player is Metronome Technologie's entry level model although in this case it's a big entry ticket coming in at a fiver short of 5600 euros. It's a combined CD player and DAC unit capable of playing Redbook CDs via it's internal mechanism and high res files via USB from a PC or a Mac. This gives it the advantage of a certain degree of futureproofing should CD sales drop even more than they have been recently.

The Metronome is a substantial player coming in at over 15kg and being a top loader requires substantial real estate in your rack. In my case the turntable made way during the review period but more on that later.
Build quality is frankly top notch. The front panel is machined from solid aluminium with both the company and player's names engraved in the front. This is then given a gorgeous satin finish to give a very classy feel. The top loading CD draw is again hewn from solid aluminium and has a equally classy almost bombproof feel to it along with a smooth manual opening – there's just enough resistance to give the impression that everything has been properly thought out right down to the tactile experience.
Inside the CD drawer there is a Delrin (that's POM to those unfamiliar with Dupont trademarks) puck with a magnet to hold it in place and stabilise the disc.
Controls are limited to Play, Stop, Skip forwards and Skip backwards. The controls themselves are one area I felt a little let down. The buttons are on the small size with distinct lateral play discernable in all four buttons. This is one area where I definitely prefer the Naim player which normally does the CD duties in my system.
The rest of the payer is a satin painted steel casework which presented me with a second opportunity to be picky. The top is held on with 4 Allen bolts which could be prettier. However the engineer in me pointed out that the bolts in question, whilst being slightly ugly, have the advantage of being easy to tighten without rounding the hexagon off when compared to a button head bolt of the same thread size. Maybe a Torx  button head bolt would be a suitable compromise here?

Round the back there are the expected outputs with both balanced XLRs and unbalanced phonos. There are also a USB digital input and S/PDIF output should you be lucky enough to have a better DAC.

The remote is a no fuss unit – it's not hewn from billet aluminium or gold plated but has all the necessary buttons to operate the player so no complaints there. It will also pilot older Metronome amps should you posess one.

I hooked the Player up to my usual system of a Canary Audio 608LV amp into Linn Index II speakers. Cabling was Oyaide between the Metronome and the Canary and Hitachi LC-OFC speaker cables and everything sat on a Lavardin K-Rak. My usual Naim CD5i (another entry level player but at a much more affordable price) was on hand for comparison.

First thing I noticed is that this player is loud – 2.5V RMS from the unbalanced phonos had me concerned as the lowest level on the stepped attenuator on the Canary is quite a jump from zero meaning potential WAF issues could be on the cards. In reality this proved not to be an issue  - maybe the sound quality was a factor here?

I started off with Norah Jones' Feels like Home just to check the Player was working OK. Straight away I was impressed by the amount of detail coming out – parts that were virtually inaudible suddenly became clearer than with the Naim. Vocal harmonies were much clearer and easier to follow. There was also some fabulous instrumental texture.
The overdriven guitar on "What Am I To You" has always been a great sound to my ears but the Metronome managed to make it sound even more like the real thing. Electric piano was equally organic sounding making the Naim sound like it was playing a sample of the same instrument. I would point out here that the Metronome players are all "burnt in" at the factory and work well straight out the box. There's no lengthy acclimatisation period required.

The next day I picked the kids up from school and my eldest asked (nay insisted) that we play AC/DC's "Thunderstruck" as soon as we got home. I admit I wasn't expecting greater things than I normally hear as the Naim is pretty hot on the drive and pace side of things but I relented. Just to prove me wrong the Metronome kept the musicality and drive of the Naim whilst adding a much clearer view into the mix. The guitars go from being loud to loud and characterful. The same is true of the drums on this track which previously sounded like a rubber mallet on a car door and started to sound like real albeit highly processed drums. 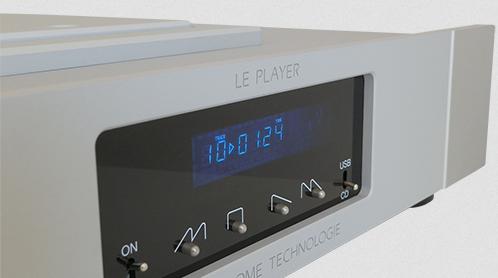 The surprises continued and as the Metronome is a French player I thought it right to play some French music on it.

Daft Punk's "Get Lucky" has been played to death on just about every radio station where they're allowed to play it. Everyone knows what it sounds like – or do they? The Metronome cleaned up the bass line enough to make me wonder if it was the same bass player. It's more tuneful and there are obvious rests in the score. The Naim tends to just plough forward in comparison missing out on the subtleties that separate a performance from just playing an instrument.

Next up was Etienne Daho's "Ouverture" from the album Corps et Armes  - on this the Metronome brought the voice right out into the room with the rest of the band and orchestra spread wider and further back in the soundstage than I am used to. A very effective combination of a beautiful orchestral score and close mic'ed voice that I would recommend you have listen to some day.(the rest of the record ain't bad either).

To finish off with some Gallic flair I tried M83's Hurry Up We're Dreaming and the track "Intro". This starts with a synth loop which is then joined by a spoken voice followed by a singer. More synthesizers join in before finally a combination of electronic percussion and a real drummer build the track to the opening climax of the album. The Naim makes it enjoyable although it can be a little fatiguing when played loud. The Metronome starts off by digging out the complexities of the synth loop and turning what was apparently one note at a time into 2 or 3. The voice is more atmospheric and the singer more dynamic without ever being "shouty". The electronic percussion is more precisely pitched and placed in the soundstage at left of centre. As for the drums  - well the fills are clearer and more human sounding allowing the performance to shine.

All of the above were on CD – during the very short review period I didn't have time to test the DAC using dematerialised music – I'm still a disc buyer and don't currently have a computer music setup that the Player could have been tested in. I could have bodged something but a) it wouldn't have been fair to the machine to use it in less than optimum conditions and b) I was enjoying its Red Book CD abilities far too much. In fact I wasn't missing my analogue components either. Some of the music that I only have on vinyl yes but not necessarily the format.

Apart from the bolts that I moaned about earlier and the feel of the buttons the Player did show a couple of disc loading errors. On experimentation I found that if the drawer was not 100% opened the opening movement was not detected and the machine picked up the subsequent closing of the draw as an opening meaning it didn't try to read the disc. To Metronome's defence the loan sample was off the initial production batch and to their credit when I returned it they showed me the problem has been fixed before any of the machines get near the shops!

I enjoyed having the Player at home an awful lot and it's certainly the best machine I have had in my system. It outclasses my own Naim Cd5i without any issues which is both (very) frustrating now it's gone back and a relief as the price difference is such that it would be embarrassing if it didn't.

The fit and finish is what you would expect for this sort of money and its inherent musicality combined with a good helping of detail and excellent tone make it definitely one for the shortlist if you are looking to spend this amount of money on a CD player.