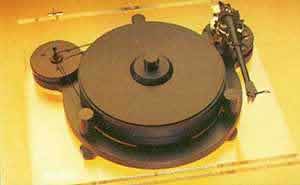 This is the oddest test I've ever done. Why? Because I bought the test turntable before the test - without ever hearing it... This flies in the face of ever sensible piece of advice you've ever had on hi-fi purchases but there are a few mitigating factors. First I've owned and loved a Michell Gyrodek for the last three years. Second everyone said the Orbe was even better and lastly someone offered me an obscene amount of money for the Gyro as an ornament!!!!

The last point is an interesting one. Michells pioneered the use of clear acrylic in their turntables making them very striking in a world of wood plinths. The construction using such expensive material also meant John Michell's decks were never cheap, but the fact that acrylic needed little finishing saved on rising labour costs, making their price fall relative to increasingly expensive to produce wooden plinthed decks.
For example when introduced the Gyro was a lot more expensive than an LP12. Many years and several updates later it is a lot cheaper dispite it being engineered to a standard well beyond the Linn (just compare sub-chassis and bearings...). 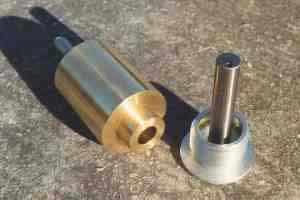 As the Gyro carved a niche as one of THE top decks, the amount of money vinyl junkies seemed prepared to pay for a deck went up. John Michell found he had the space to slot a "superdeck" above the Gyro to take on the likes of the SME 20 and Roksan TMS.....

The Orbe is a comprehensive update on the Gyro. It uses a similar alloy sub-chassis and arm board, mass loaded to put an equal load on each suspension spring. It also uses the same massive inverted bronze bearing with its load carrying ball bearing at the centre of the platter mass. The Gyro's optional QC synthesized power supply is standard. After this the two designs diverge.
On the Gyro the chassis mounts three spring towers which go through the plinth and down via adjustable feet to whatever support you chose to use. On the Orbe these towers sit on adjustable spikes into another acrylic plinth. This is then supported by separate adjustable feet. This gives an extra layer of isolation over the Gyro.

As with the latest Gyro's the motor housing sits directly on the TT support through a hole in both plinths. Unlike the Gyro this is a massive brass and aluminium housing far heavier than its lesser brethren. But the biggest difference is in the platter.
Gone is the exquisite black composite platter with its mesmerising spinning brass weights, to be replaced by a massive black platter made up of three Gyro platters glued together. This is topped by a large "domed" nut that bolts the platter down. A record clamp is then screwed down forcing the record to bend over this nut so it is in intimate contact with the platter across it width. The idea being that the stylus "sees" a record several inches thick.

The deck is delivered well packaged and the whole thing slots together in the sort of way that makes you know that this is an engineers turntable. It's also high mass design so you may need help lifting into place.
Setup is relatively simple, involving levelling and centering the suspension. As with the Gyro all adjustments are done from the top with the table in situ, no more scrabbling around under an LP12 only to see the 'bounce' going completely out the moment you put the damn thing back...

Visually it's a stunner. Acres of acrylic, turned alloy and silver painted chassis. The black option is very "Darth Vadar" but my SMEIV is silver so I was stuck with that - I still can't believe they don't come from the same factory... The only snag is that the Gyro is even prettier.

When I bought the Orbe I was ready for it. I had my new SME IV and the wonderful Dynavector XV-1 with its matching head-amp, together costing nearly twice the Orbe's 2000 pounds. Both had been run in on my Gyro.

Given the similarities and parentage I'd expected (and hoped) that the the Orbe would be like a better Gyro, you know the sort of thing, a little more detail, bass, image etc. What I got was a very different sound - it was a big surprise.

After my old LP12 my Gyro sounded so open and airy, much better soundstaging and more detail. The trade off was less bass power, but the drier bass of the Gyro was much less coloured than the rose tinted LP12 allowing you to use "full-range" speakers without fear of an overblown sound.
In comparison the Orbe sounded so DARK. It was as if the "airiness" of the Gyro was caused by a high frequency sheen. Here the image remained huge but solid and meaty. The bass reached down to my boots yet remained clean. The top end sounded like a layer of hash had been wiped away - extended, clear but never harsh.
The difference was quite shocking but so obviously was right - the Gyro's etherial quality was shown up as artifice, lacking in substance. Removing this allowed new layers of stage depth to become apparent.

Regular readers will know of my bias towards dynamic kit, here the Orbe excelled, drum kids exploded, massed choirs pressed into the room. As music became more complex the Orbe held on where the Gyro would blur together.
Though hugely dynamic everything sounded so 'right'. Female vocal, the spoken voice, both evil tests of fidelity, came into the room with a naturalness and ease that I'd not heard before.

But here the quality of the supporting cast was a vital factor. The IPL's (a 300 pound speaker kit!!) showed that extra bass power and control, the Audions never let go and of course the arm and cartridge clearly showed the effect of the change of deck. What I'm saying is that the Orbe will sound good no matter what you put it through, but don't expect it to turn a sows ear of a system into a silk purse.
A deck like this deserves top partners to back it up. I have to say that one problem was that the gulf between it and the various CD players I had to hand widened considerably over the Gyro, a deck which is a better match than most for CD.

Really great front ends have an immense solidity, a feeling that you're dragging the last fraction of fidelity from a disc to get you right up to the mastertape. The Orbe, kitted out as I have, is such a source. "Suspension of belief" is so much easier.
The desire to put LP after LP on into the small hours increased.

Nothing is perfect but the Orbe comes frighteningly close. Against the best (still the LP12 in my opinion) the timing though good is not quite there. Los Lobos' 'Be Still' timed effortlessly on Steve's DC powered LP12, on the Orbe it still needed you to concentrate sometimes to hold onto the rhythm, though it certainly buried my old LP12 in every other respect.
The bass is seismic but this puts demands on the rest of the system and in some circumstances could be a little slow. It's hard to know what to blame in the chain as no other front-end has put the system through this sort of workout (N.B. current testing with a horn system gives stunning bass speed though less depth).
The lack of a conventional plinth means you have no-where to rest your wrist when cuing. Owners of inipivots with no arm lift may find their hands less steady than they thought.
Lastly the lid hinges are "temperamental", working loose and not allowing the lid to drop properly on occasion - big deal...

In true Michell tradition the Orbe is a bargain. When introduced it was priced with the SME20 and Roksan TMS. Now whilst they have become more expensive the Orbe has been improved and stayed at much the same price.
In a mid price system it's overkill and its most serious rival is probably the prettier and still impressive Gyro. In a top system the Orbe not only beats the Gyro but exposes its faults in such a way as to make it hard to go back.
Rumour has it that the single biggest difference between the decks is the platter. The Orbe platter is available as an upgrade for a Gyro to produce a "Gorb" (sheeesh!), a case of sacrificing looks for performance if ever there was one.

Lastly the Orbe (and Gyro) are available without the acrylic for considerably less. John Michell tells me they sound at least as good as the full blown models which makes them an even better buy for those living in a dust free environment (not me...).

But it's the Orbe that sits at the top of the pile. Right now I'm listening to it through a 18,000 pound system (not mine!). That it is so obviously NOT the limiting factor in such a system speaks volumes. It's now been in near continuous use for 8 months without missing a beat. Add the fact that here is the oldest turntable company in Britain with a reputation for supporting any deck no matter how old and you have a sure recommendation.
Right now if a good friend asked me what turntable to buy I'd tell them they'd need a very good reason not to go for one of the Michells.