Chasing Down the Jitter Bug

I'd picked up from pro-audio contacts that there is increasing interest in the use of studio clocks in a high-end domestic audio context. High quality studio clocks have become cheaper and people on the web have been talking about the benefits. So this review is of a recently introduced studio clock and its application in reclocking the data streams in a regular hi-fi. But before we get into what a studio clock does we need to understand a bit about jitter.

Jitter is a form of digital distortion without a real parallel in the analogue audio domain. In my simple mind it works like this. Digital recording samples information about a sound wave thousands of times a second. Digital replay consists of decoding that sampled information to recreate the sound wave. One key factor in this chain is the precision of the timing with which the samples are taken and replayed. For standard CD quality, samples are taken once every forty four (point one) thousandths of a second. On replay, the samples need to be replayed with exactly the same accuracy. Any deviation of individual samples from that precise timing value is called jitter.

You can think of it in terms of a movie that is shot at 24 frames per second. The film needs to be shot at precisely that rate and the projector needs to pull the film through at just that speed. If the timing slips, so the film gets jerky.

Jitter in domestic audio is introduced because timing issues arise when data is passed between devices, typically between a computer and a DAC. If the data is presented to the receiving device with mistimed data or if there are inaccuracies in the internal timing then jitter can arise. The impact of jitter in audio terms at its most noticeable is clicks and glitches. Generally though, the effect is a diffusion of the stereo image and, potentially, damage to the timbral accuracy of the replay. So anything that can reduce jitter ought to be a good thing.

In a commercial digital recording studio the digital converters are all connected to a central device – the studio clock – which sends them a timing signal to synchronise and ensure the accuracy of their coding and decoding. In most domestic digital to analogue converters the clock function is integrated into the chip of the DAC, but some higher end models can be controlled by a remote clock.

Studio clocks are high quality devices that could have two applications in a domestic hi-fi. They could be used to synchronise multiple digital devices to a central clock as they are in a studio or they could be used to reclock the output from a source en-route to a DAC.

The DACs used by most audiophiles aren't specified to enable them to synchronise to an independent clock source so in this review we'll look at reclocking. In its reclocking role a clock will regenerate the timing signal to a higher degree of accuracy than the original. Since this should be at a more precise level than the final DAC then it maximises the DACs performance.

This review was prompted by reading discussion of a new studio clock by Mutec. Mutec claims their technology makes studio clocks both more accurate and affordable. The MC-3+ Smart Clock under consideration is primarily a studio device and this is reflected in its comprehensive specification and connectivity. I won't go into the details here as most of them are irrelevant in a domestic context. For reclocking though, the connections of interest are optical and coaxial S/P-DIF inputs and outputs and an XLR output for AES/EBU connections. Unfortunately it does not currently have a USB input so cannot connect directly to most computers, although I understand that a USB capability is planned for the future.

Mutec say that their clock "aggressively" reclocks the incoming signal. I think that what this means is that it strips the incoming signal of its timing information and replaces it with a version it generates itself to a higher degree of accuracy than the original.

The device is pretty easy to use. Menu and selection buttons allow switching between the inputs and outputs. All of the key information is shown in lights – the unit looks like a Christmas tree when it's powered up. It is, however, possible to turn these off in normal use.

There is no remote control but this would only be an issue if you wanted to use the Mutec to reclock multiple sources and change between them without leaving your armchair. Once the correct settings are saved it simply sits in the circuit ticking away, very quickly and accurately. 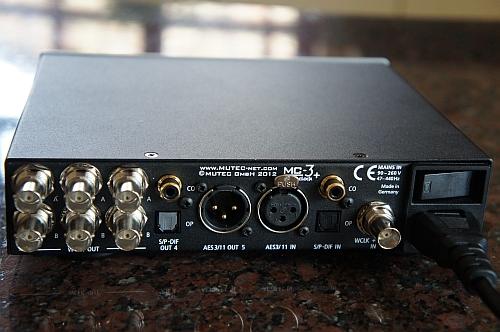 As ever, the proof of these things is in the listening. A clock is a tricky thing to test with any confidence of getting results that will be the same for everyone. This is because its effect will depend on the quality of the source and the susceptibility of the other items in the signal chain to jitter. I tried the Mutec in my main stereo. The digital part of this system comprises a simple netbook running Foobar 2000 as a USB source. The USB is converted to coaxial by a KingRex UC192 converter. This feeds the DAC in a Marantz SA-KI Pearl Lite SACD player. Monitoring is via a Cambridge Audio 851A integrated and a pair of Usher UC-192 stand mounts, underpinned by an Anthony Gallo subwoofer.

Inserting the Mutec into the chain between the KingRex and the DAC seemed to bring a small improvement to the sound. But it was difficult to isolate the difference or make direct comparisons because of the time it took to break and remake the connections. So I rigged up a slightly unscientific test set up. The KingRex has two outputs: AES/BEU and Coaxial and the Marantz two inputs. So I connected both. The Coaxial was connected directly to the DAC as normal. The AES/BEU link was connected to the Mutec then out on an optical S/P-DIF to the corresponding input on the DAC. This made it possible to switch at the DAC between digital circuits with and without the Mutec.

The main reason that it was slightly unscientific is that there were other aspects of the chain that were not common apart from the Mutec and these could have had an impact. I suspect, for instance, that a slight difference in perceived volume level between the chains was more likely a result of the different electronics between the DAC's coaxial and optical inputs than of reprocessing the clock. The other consideration is that the Kingrex is a synchronous converter, so the data has been reclocked once already in the chain.

Despite its shortcomings this arrangement made it possible for me to test my initial perceptions by simple switching with just a couple of seconds gap as the DAC changed channels. The listening results confirmed my first impression. With the clock in the signal chain the soundstage was slightly wider and slightly deeper. At the same time the instruments in the soundstage sounded a little fuller, more rounded in a way. It was not a night and day difference but then little in the digital domain seems to be. More like moving from one DAC to a very slightly better one.

So I ran through some of my regular listening material and noted down the effects of having the Mutec in circuit. On the beautifully clear Chesky recording of Spanish Harlem, Rebecca Pidgeon's voice and the piano sounded a little more natural and the entry of the shaker seemed to happen deeper in the soundstage. A couple of high resolution recordings came next. Dick Hyman's Age of Swing in an 88.2kHz version seemed to open up and become more immersive as the percussion lost some harshness and the acoustic space was better depicted. The effect was more pronounced on an Anna Netrebko aria where the Mutec smoothed the voice and brought out the subtle sound of the auditorium a little more.

My other listening notes follow a similar pattern. The delicate cymbals on Lyle Lovett's North Dakota sounded more relaxed and the music even more intimate. Sticking with country music I found the threads of treated acoustic guitars on Mary Chapin Carpenter's Slave to the Beauty easier to pick out. Onto rockier material, and the Mutec brought out very slightly more detail in the dense thicket of distorted guitars that punctuate Chasing Cars by Snow Patrol.

In conclusion, having the Mutec in the chain consistently improved the sound. The effect was pretty subtle though. In its current version it could well be worth a try in higher end systems or in systems where you suspect jitter could be an issue. I'm looking forward to Mutec implementing a USB capability using this technology as that will give us a real chance to put it through its paces.