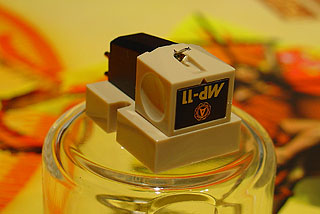 Funny how few vinyl-related manufacturers have disappeared since the advent of CD, not?

True, relative giants like Sony and Yamaha make turntables nor cartridges anymore, and high-enders like Levinson, Krell, and Accuphase also have withdrawn from that market, but most other cartridge builders, bar the odd Highphonic or Kiseki, still haven't bitten the dust.

Imagine my surprise then when I discovered that, after years of invisibility, Nagaoka not only still manufacture styli and cantilever assemblies for audio (alongside precision parts for other industries), but even haven't stopped making their own line of budget and mid-priced moving magnet pick-ups! While once in a while I detected MP-series cartridges on the market, I always assumed these to be New Old Stock. Not so! There's still a whole range, MP10 to MP50, spherical to fine line, aluminium to boron, peanuts to half-a-kilo-dough, standard mount or co-integrated with a headshell: you name it. But one has to look hard for them. Nagaoka never was an outfit big enough to trouble the likes of Ortofon and Audio Technica in their sleep.

The 'net, as always, helps. Googling well you'll see that these products are not unavailable in the UK, the Scandinavian countries, canada, and Germany, apart from Japan, of course.

Enter here the Nagaoka MP11, a virtually unchanged descendant of the eponymous budget-favourite of the early 80s. Pre-dating my own audio conscience this is a regular blast from the past, and a cheap one at that: 60 Euros. 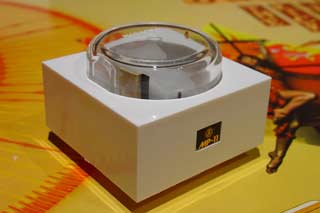 The cartridge comes in a cubic white cardboard box which houses a clear plastic container with the actual payload as well as a tiny screwdriver and mounting hardware. Once liberated from its confines the MP11 proves the same chunky and large design of yore, in a rather drab beige-and-black colour scheme. This MM, or more precisely Moving Iron, with elliptical stylus on alu cantilever is specified for a 5mV output (5cms/s) into 47kOhms parallelled with 100pF (more on that later) and a fairly high compliance of 20*10^-6 cm/dyne static and 8*10^-6 cm/dyne dynamic, frequency not given (more on that later, too). Cartridge mass is 6.8g.

The mounting holes are not threaded (it would be unrealistic to expect this at this price level), but thanks to its square and straight sides and a fine building accuracy (see microscope pictures) aligning the MP11 in the Rega arm was a breeze. I set tracking force in the middle of the suggested 1.8-2.3g range, and VTA with the arm slightly tail down. (I came to the latter analysing the replay of 10kHz tones versus arm height, where a mild optimum was found for maximum output level of the fundamental and lowest distortion). There was just one small snag in that even with antiskate force set to maximum the cantilever still deflected somewhat to the right (seen from the front of the turntable). Strange, and I have no explanation for this. Yet.

Listening to the Nagaoka MP11

I can be short in this: this is a fine sounding cheap cartridge. It presented a wide soundstage with some depth, married to somewhat diffuse positioning and a sweet and laidback tonal balance. There was a certain lack of presence, remember that droop over 1kHz, but the sound never turned dull thanks to that peak at 13kHz. True, the latter led to a somewhat whitewashed and sizzly treble, but never really annoyingly so.

Bass initially seemed somewhat subdued, but prolonged listening revealed it to be of a quite detailed and controlled nature, reaching down deeper and clearer than expected. This is possibly the beneficial effect of that very low resonance frequency due to the excessive compliance, combined with a good internal damping.

Voices were portrayed in a friendly way, with some huskyness, never turning rough. Overall there were some papery colourations, and s-sounds lacked somewhat in control.

As many moving magnets this cartridhe has a high internal impedance (4900 Ohms is quoted for the resistive part) and thus the susceptibility to interference is higher than with moving coils. I experienced the odd bang or tick through my system, probably induced by the house's central heating system switching on or off. Good shielding and earthing seem to be mandatory to counter this.

The Nagaoka MP11 is an economic MM cartridge with fair-to-good measured performance, non-problematic handling (except for the low riding height) and an uncritical and friendly sound quality.