...not only for Flat Earth lovers 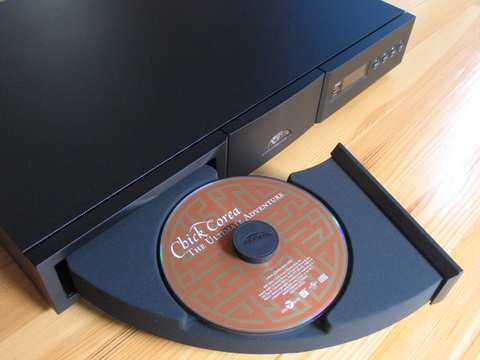 There's almost no product category that covers such a range of prices as digital sources. A complete multi player, capable of sound and video, is available in almost any supermarket for less than the price of some of the disks that will be played on it. At the other end of the spectrum manufacturers ask the price of a luxury car for just a CD transport or a DAC. Clearly, not everybody agrees that 'digital is digital', and with good reason. But is it really necessary to spend a hundred or even a thousand times more than the most basic machine to get decent sound quality? Where does the law of diminishing returns actually set in? I've been asking myself those questions lately, and I have reviewed half a dozen CD players and a DAC in a bid to find out. The latest findings are worrying, but more for my bank account than for the player under review, I hasten to add.

The Naim CD5x is the most expensive player I have reviewed to date, but not by a large margin. It does come with high expectations, as Naim have made quite a name (yes, yes, I know...) with their CD players in recent years. The top model, the CD555, costs a staggering £14000 and gets impressive reviews everywhere. The whole range consists of 5 players: CD5i, CD5x, CDX2, CDS3 and CD555, but in practice there are more possibilities. This is because Naim offer power supply upgrades for most of their players. This is somewhat unusual, although some other brands, like Cyrus and Musical Fidelity have a similar approach. It does make sense though, as power supplies do play an important part in good sound. Both the CD5x and the CDX2 can be used on their own or with a separate power supply, and the CDS3 and CD555 can both be used with 2 power supplies, making the total number of options 9. The bare CD5x under review is only the second option. Still, the price tag is higher than the top player of many a brand. Naim are serious about CD players, that much is clear.

As said, the CD5x can take an outboard power supply: the Flatcap 2x, which will cost you an additional £565. This will then power the analogue output stages, leaving the internal power supply to take care of everything else. The connector for the Flatcap is normally covered by a special link plug that connects the internal power supply to the relevant bits when in place. Simply remove this and plug in the Flatcap and you're done. Strangely enough this is the only way to upgrade this player. Using it with a DAC is not possible, as a digital output isn't provided. Naim have never been in favour of two-box players in the form of transport and DAC, preferring to keep these two components as closely linked as possible and putting the power supplies in a separate box when possible. 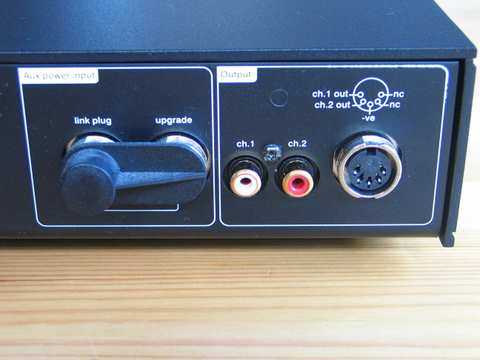 Just as eccentric is the use of DIN output connectors. Until about 5 years ago all Naim equipment only featured DIN connectors. Naim claims that DIN sounds better, something I haven't been able to check. The CD5x has a set of DIN and RCA (phono) outputs at the back, making it very easy indeed to connect it to both Naim and other amplifiers. Another unique feature is the CD tray. This is almost a combination of a top loader and a normal CD player, as the whole transport mechanism swings out when you open the drawer, which has to be done by hand. The CD has to be placed on the spindle and is then fixed with a small magnetic puck. It does sound more cumbersome than it actually is, but it’s still a bit more work than the standard solution. The advantage is a very solid construction, good reliability (not motorised) and added style and quirkiness.

At this point you could be forgiven for thinking that this is a niche product for a select and slightly eccentric subset of the audiophile community, which has never been that normal a group anyway. And ten years ago you might even have been right. But Naim has changed. This player will fit into a non-Naim system as well as any other brand's player will fit into an unrelated system. Visually it will also match quite easily, with its understated style. You can even have it in any colour you like, as long as it’s black.

This is where things get really interesting. The CD5x is easily the best sounding player I’ve ever had in my system, and not by a small margin either. The main reason for this is a virtually complete absence of digital edge. This player simply doesn’t sound like a CD player. The sound is smooth, relaxed, unhurried and unforced. It makes all other CD players I’ve heard sound distinctly ‘digital’. The real beauty is that this doesn’t come at the cost of detail or dynamics. This player actually also has a lot of drive, especially in the lower frequencies. The bass is tight, deep and tuneful and connects very well to the midrange, giving instruments like piano real substance. There’s no boom or woolliness to the bass at all. The mid region is open and transparent and the high frequencies are crisp and detailed. Overall, the impression is that nothing is left out and everything on the disk is retrieved.

Naim have a certain reputation for being 'rhythmic'. Naim, and Linn, devotees are known as the ‘flat earth society’ within audio as their beliefs are different from the rest of us. Again, this might alienate the more common-sense customer, as it suggests some magic that will dig out this one specific aspect of music. But the reality is that this player actually is very good at unravelling complex rhythms. It does make your foot tap, and it has an uncanny ability of making sense of things that seemed a bit disjointed before. After listening to it for a while there’s no denying that it does excel at rhythm. Even stranger is that all of this comes with the most fluid, smooth and organic sound I have ever experienced from CD. Nothing is thrown at you, nothing is overemphasised. The smallest details are allowed to be present, without being masked by bigger parts. There’s no obvious ‘leading edge’ accentuation at all.

It’s a sound that works with everything and all sorts of music. I was in a position to compare the CD5x to several other players and it proved its superiority time and time again. It always sounded more neutral and controlled, always smoother and always better than anything else I tried. It also has a knack of pointing out weaknesses in other sources. This is because it basically has no flaws of its own and is so even-handed that any colouration or other problem in another player is clearly exposed. It makes everything else seem a bit contrived and artificial.

Naim was never famous for soundstage, especially depth, but this player actually does a very good job at it. Again, nothing is exaggerated or overly accentuated but what is there is excellent and correct. No artificial widening of the soundstage, no tricks or special effects, just a nice, natural perspective. Central images are stable and completely convincing.

The bottom line with this player is that it doesn't sound like a CD player, which is high praise indeed, and that it never puts a foot wrong, which is remarkable too. I've listened to it for weeks, on several amps and several pairs of speakers and it just performed brilliantly all the time. It makes for both a very engaging and relaxing listening experience. Engaging for its drive, speed, detail and dynamics, relaxing for its complete lack of harshness, edge, colouration or distortion. It just plays the music, all the music and nothing else. I'm sure there are better players, but I'm also sure that there are not many that are so balanced, well behaved and musically rewarding in the long run. If this is a compromise, then it’s the best compromise possible. It just feels perfect to me. 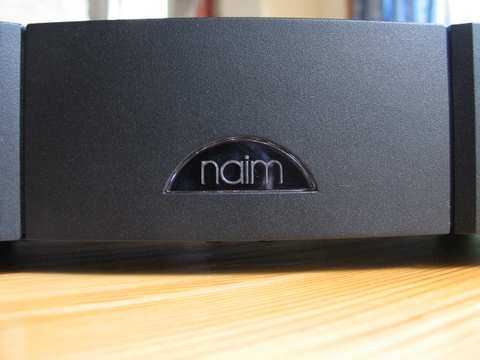 A friend of mine has a Naim system comprising of a CD5 CD player, a NAC 112 preamp, a NAP 150 power amp, a Flatcap 2 power supply and a pair of Living Voice Avatar OBX speakers. Quite a system, and it lives in a very good room as well. His CD5 is the direct predecessor of the CD5x and looks absolutely identical except for the remote. Clearly this setup provided us with an excellent opportunity to test a few things, like the effect of the Flatcap power supply.

We started with just adding the CD5x to the system and comparing it to the CD5 with Flatcap 2. Now, the CD5x costs about the same as the CD5 and the Flatcap 2 together, making this an interesting, budget neutral, contest. And indeed, there was not much between these two players. The CD5x sounded a bit cleaner and crisper and had better focus while the CD5/Flatcap combination seemed a bit tighter in the bass. Both were excellent, lively performers that presented music in an enjoyable and believable way.

Next, we moved the Flatcap from the CD5 to the CD5x. This only takes a minute, as it just involves swapping a cable and a plug. This made the two players sound distinctly different. The CD5 now lost much of its appeal and sounded thinner and grainier. The CD5x on the other hand really started to sing. There was no real change in personality or presentation, just more of what was already there: precision with smoothness. The combination sounded so good that we found ourselves drawn into the music to such an extent that we forgot to listen to the equipment anymore. We just didn't pay attention to bass, focus, treble and other parameters anymore, as this player can actually produce instruments and musicians in the room with such realism that all these things don't matter anymore.

It is interesting to note that the effect of the Flatcap on the CD5 and the CD5x isn't the same. In the case of the CD5 it mostly adds weight and substance while also improving grain and spatial presentation. With the CD5x it mainly increased precision and delicacy. In both cases this is a very worthwhile upgrade and should be considered the next step after purchasing the player itself. 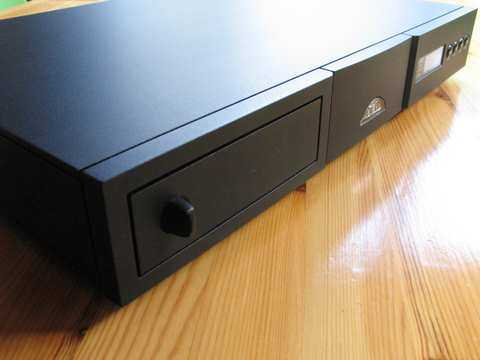 I'm extremely impressed with this player. It has surprised me. The more I listened to it the more I liked it. It’s the most ‘un-digital’ player I’ve ever had in my system, and the one with the most rhythm and drive at the same time. It is a very even-handed source, without any obvious flaws that can play any type of music in an utterly convincing way.

To answer my initial question about the law of diminishing returns for CD players: this one has convinced me that it is still worth spending this sort of money on a CD player. You do really get a better sound for your extra money. Cheaper players might sound good too, but I haven’t found one yet that sounds this good. It is the simple difference between sounding like a good CD player, or just sounding good, period. Very highly recommended.

[Click here] for a separate review of the Naim FlatCap 2X