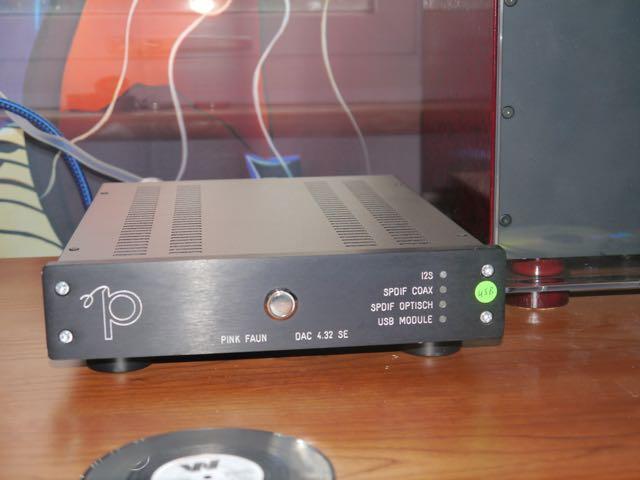 A DAC with an I2S interface

There are so many DACs available today it is getting very hard to pick one from the crowd. It is all about the implementation, as the majority of DACs use a small number of chipsets. The 4.32se from Pink Faun in Holland, is very well built and comes with the full compliment of inputs including USB that supports DSD64-128-256-512.
Also supplied with the 4.32se was a nicely made I2S cable (HDMI), something I will go into in more detail later. The DAC did come with a beautifully made power cable, unfortunately it was for the European market so not much use here in the UK.
The only option I would like to have seen is balanced output, but at the price (€890) it is probably too much to ask. If you require balanced output then there is always the 2.32 DAC, but then the price steps up to a heady €3890.

As you can see in the picture below, the 4.32se is nicely laid out inside, with everything apart from the power input socket and input selector, mounted on the circuit board.

The USB input is a €100 option that plugs on to the motherboard. I am a little surprised to see the power input section and fuse exposed.
I would have expected a plastic cover over the live connections to prevent accidental contact. 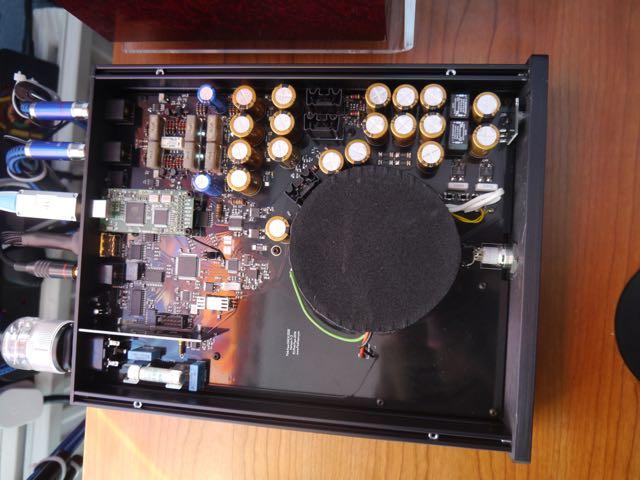 Inside the 4.32se, a very good build quality.

The 4.32se uses a Burr Brown PCM 1795 DAC with a discrete current to voltage converter, no over sampling and a discrete analogue output stage with no feedback.
The power supply uses 75.000mF of capacitors in a Pi filter configuration feeding separate regulators for digital and analogue sections.

The input formats supported are, PCM 32 bit up to 192kHz, with the USB also supporting DSD as I said earlier.
The rare feature of this DAC is support for I2S input over HDMI. I2S as an input for DACs is slowly gaining a following as it is said to avoid the noise and jitter problems encountered with USB input.

Last year I reviewed the I2S interface card for a Windows PC using my regular La Voce DAC and found it to be a significant improvement over the standard asynchronous USB fitted in the La Voce.
Will this improvement be maintained? The only downside of I2S is no support for DSD high resolution music.

To review this DAC I fed it a diet of music from 3 different PCs, first up was the Windows 8.1 PC with the I2S interface card I built last year.
I also used another PC with the same Intel motherboard as the Windows PC but running Audiophile Linux v3 for USB duty.
The third PC was also running Audiophile Linux v3 but was a much older motherboard with on board SPDIF coaxial output.
On first power up and with the mains supplied from my PS Audio P500 mains regenerator the sound was a bit hard or perhaps digital sounding.
I switched it off after each listening session and this got me thinking, should the power be left on? I moved the supply to the constantly on, filtered output of the P500 and left it on for a couple of days.
Leaving the 4.32se on constantly had a significant affect, the sound relaxed and the hardness disappeared.

My system for reviewing this DAC is my regular setup, the reference DAC is the La Voce from Aqua acoustic quality in Milan.
The pre-amp is the Music First Audio Classic with transformer volume control.
Power amplifier duties are supplied by my trusty Leak ST50 with Eryk S Concept Superioro turning the electrons into sound waves.
I also toyed with some prototype class D amplifier modules from China, based on the International Rectifier chip sets.
There will be an article on these amplifiers soon that includes an usual chassis solution!

Straight out of the box the 4.32se was a bit hard and digital sounding on all the inputs. It took a minimum of 2 days continuous power before the DAC settled down, I recommend leaving it on permanently to avoid the warm up time.

Once warmed up I started with the I2S source fed via the I2S card and Jriver. This is an excellent setup and with a remote app on an iPad providing a first rate media playing solution.

There is no need for the very expensive media servers that are appearing these days. With the I2S interface I was able to explore my music PCM library in full and it was a most enjoyable experience. The sound is relaxed, with little trace of the digital hardness. As when I reviewed the I2S interface card you get a presentation that really reveals the rhythm of the recording. The 4.32se through the I2S input is very good indeed, the details contained in the recording are clearly revealed in a three dimensional sound stage.

Some systems can mask some of the information in a recording and it is only when it is revealed do you realise it had been missing.
The Emmylou Harris CD "Wrecking Ball" has some wonderful tracks, but I have never liked the recording. The CD always seemed hard, full of digital nasties that the voice of Emmylou just emphasises.
Using the Pink Faun 4.32se and I2S interface really cleans up this recording and I can now relax and enjoy the music.

The next input to explore is SPDIF via coaxial connection, I used the same PC built for the recent review of the RT Audio Design Orpheus mk1. The PC runs Audiophile Linux V3 with an onboard sound card that has a coaxial output. This configuration is also very good running the I2S a close second in overall quality.

The team at Pink Faun promote the I2S interface as the best for music, using a Windows PC I think they are right. Using a PC running Audiophile Linux V3 via the SPDIF input my ears tells me this setup is as good as the I2S with Windows.
There is something so musical, it just sounds right, almost everything I played was about as good as I have heard.

Using the USB input opens up another music format to play with, DSD. Using another PC with Audiophile Linux V3 (Sorry to keep repeating myself) the USB interface operates well, with no stuttering or interruptions to the music.

When changing from PCM to DSD there is a click as the DAC sorts it's self out and another as it changes back to PCM at the end. This is a behaviour I have not experienced before with other DSD capable DACs.

In spite of the clicks the results with DSD are very good and the 4.32se does show off the DSD tracks well.

The Emmylou Harris album, played through the USB input, seemed less interesting and engaging than when played through the I2S setup. It is hard to articulate the differences, it just feels more natural, with better micro-dynamics and harmonic structure via I2S.

If you are in the market for a DAC that supports the majority of input formats then the Pink Faun 4.32se should be on your short list. The DAC is very well made, inside and out, with a simple display indicating the input selected.

Via the I2S input over HDMI from a Windows PC with the matching I2S interface card the results are splendid, every bit as good as my much more expensive La Voce DAC.

If you are not a Windows PC fan and would prefer an alternative source then SPDIF input from Audiophile Linux is very nearly as good in sound quality and avoids the maintenance pains that Windows brings with it!

Using the USB input adds DSD format support and with good quality recordings the results are impressive. The sound stage has an inky black background from which appear the musicians and singers.
I hate to admit it, but with the right material, digital can now get very close to good old vinyl without the vinyl noises that are hard to avoid. I have a DSD128 download of Oscar Peterson playing Richard Rogers, the resulting musical experience is relaxed, detailed and it captures your attention.

The downside of using DSD is the limited choice of material and the inflated costs. If you can live with this, then the Pink Faun 4.32se via USB is a very good choice.

If, like me, you have a large collection of music ripped from CD or PCM high resolution downloads then the best configuration is using I2S with a Windows PC and JRiver. I prefer the 4.32se via coaxial SPDIF using the Audiophile Linux PC as the source.

This choice is not based on absolute sound quality, but on simplicity of setup, it avoids the constant nagging from Microsoft about downloading updates and rebooting the system.