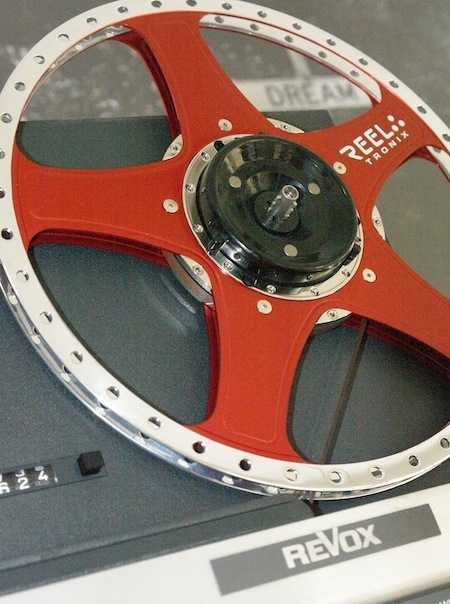 Who would have thought that in 2013 a new brand of reel to reel (hereafter referred to as R2R) reel is launched for analogue high speed tape recorders?

Patrick Sinegal, the man behind Reeltronix was deeply unimpressed by what reels he could get for his own tape machines. Like many audio start-ups, he thought "I could make that better" and promptly did. Encouraged by others in the enthusiastic analogue tape world, like Greg Beron who makes upcycled Tascam R2R's branded United Home Audio (UHA), Patrick made his reels commercially available. They're all metal, machined masterpieces, not 2 flat stamped flanges sandwiching a chunk of plastic like most OEM reels. Different combinations of drilling, anodising, polishing and colour are available to match your customised deck and your billet turned NAB adaptors.

These Reeltronix reels are truly beautiful pieces of engineering. They are to my Revoxes what the latest Carl Zeiss optics are to my Nikons.

A top prime lens, whose sharpness and distortion is only slightly different from comparable Nikkors, but whose drawing qualities are ideally suited to certain tasks, will only benefit the skilled photographer for whom these qualities are important. A precision reel, in place of standard reels will benefit the skilled recording engineer determined to get the last nuance from their recordings.

The third point is more important than readers might expect. As a photographer, I always knew what gear would be needed for any job, but found that leaving some other gear unpacked and propped up seemed to inspire extra client confidence, perhaps it implied being ready for any eventuality. A musician who has chosen an analogue workflow will have expectations and preconceptions about the recording quality that will be reinforced by such jewel like reels. The dominant visual component of a reel-to-reel tape recorder is that pair of massive 10.5" reels; they're never referred to in metric measurements here, despite it being 2013. Indeed, as the shift to digital recording took place, the old reel-to-reel recorders were referred to as "Big t*ts machines", saying much about the sexist cro magnum attitudes often prevenient back then. Entering a studio and seeing the Reeltronix babies mounted on a valve (tube) or solid state classic Studer, Revox, Brenell or Otari will inspire confidence in the client that this studio takes quality very seriously and means business.

Playing back some ancient 7.5ips recordings made variously on Memorex, 3M Scotch and TDK Audua straight from their 7" plastic reels indicated they have not fared well, suffering a little print through, high frequency drop outs. Respooling them on the Reeltronix reel and a 10.5inch Memorex aluminium reel brought some unexpected results. The respooling shed some more oxide and possibly some more high frequencies with it. Every step of the way required head and tape path cleaning.

"Why is the old fool trying out damaged old tape in a precision new device?" challenge the still envious plebs, stage left.

Many domestic readers will have a shelf of valued old recordings, rarely played for fear of further damage. Owning the best equipment to minimise further damage by uneven tension or for transfer to 21st century hard drive storage, will appeal to these readers. When a unique recording we made 30 years ago is about to be risked on its first playback for decades, we desire to minimise the risk of further damage while maximising the chance of a decent single playback transfer opportunity. At moments like this no expense is spared. The respooled tapes, despite the shortcomings of age, now seemed to sound more stable.

When making new recordings the adage used to be that "Tape is cheap but opportunities aren't". Tape is scarce in 2013, an internet trawl offers few suppliers & brands of fresh stock available. Changing brand or type demands recalibrating bias and sometimes eq. Using top quality reels is one contribution to minimising waste of now precious tape. The Reeltronix 10.5" big reels will sit on NAB adaptors on cine spindles, those same inaccurate cine spindles that support the 7" reels. However, back to back comparisons with good quality, well preserved, original metal 10.5" metal reels from TDK Audua, Ampex and Memorex, the dreaded 'thithithithip' sound is absent while spooling.

"Wha-a-a-at?" demand plebs, stage left, "What is this dreaded 'thithithithip' the old scribe is burbling on about? We've never heard such nonsense."

It is the sound of the edge of the tape being scraped by the rim of a take up spool. We've all heard it. It should fill every tape recordist with dread because the 'P' of 'thithithithip' represents the final assault of reel rim on mylar base, ripping valuable grains of oxide from the substrate and stretching the base. Once the recordist has heard the 'thithithithip', he or she knows that stretch of tape will never be the same again. Furthermore the inner surfaces of the Reeltronix reel are machined and polished so any contact will have less damaging consequences. Such contact could be due to eccentric hubs or misaligned NAB adapters. This explains why take up tape packing on the Reeltronix reel is the best your old scribe has ever seen.

The beautifully engineered works of art spinning on the Revox A77 MkIV challenge your Old Scribe NOT to hear any difference. Slightly less papery colouration might be imagined. However, reduced flutter is exactly what one might predict, so the a priori expectation might simply be setting up some wish fulfilment. So a high speed respooling back and forth a couple of times, with the tape now starting from the Reeltronix demonstrated the finest fast spooled tape packing possible. However fast spooling tapes is a BAD THING, because it encourages oxide shedding and print through and its attendant pre-echo (the most blatant example being the most widely circulated later master of Toots and The Maytals Bam Bam). The more even spooling of the Reeltronix reels must make a difference to pitch stability, but it wasn't possible to hear with those previously recorded 7" 7½ips band demo tapes dating back to the 70s.

More recent 10½ inch metal reels of 7½ips sound much better (obviously) but once again it is difficult to distinguish between 2 stock metal reels and one Reeltronix take up from a stock metal reel. Fast spooling again produces the most even packing ever seen. Print through and pre echo are not a problem with this particular tape, having a thick base. It is again easy to imagine a slightly more stable soundstage (better high frequency timing perhaps?) or pitch stability, but it wouldn't be possible under double blind testing.

Fresh recordings from digital and analogue sources and even live instruments were also difficult to distinguish reliably. However, and it is a reelly big HOWEVER, the comparison reels have been owned from new and stored perfectly. Looking at audio marketplaces and the dreaded fleabay, metal tape reels, whether NOS of dubious provenance or whether used, command ludicrous prices for objects that cost less than twenty quid not so long ago. Suddenly a reel of guaranteed quality, way above that needed to maintain a deck's spec for speed stability and tape handling, seems like something of a bargain. indeed, whole reel to reel tape recorders in working condition, without reels and adapters, seem to command less cash than a pair of mint and boxed 10½ inch metal reels and a pair of mint metal NAB adapters.

Imaginary or not, the sound DI'd from instruments, straight onto tape seems better focussed with the Reeltronix than with a cooking variety take up reel. Thus it is once again the quality of the source that makes the difference. Or perhaps one just plays better when one sees a perfectly balanced, perfectly aligned reel spinning to take up the precious recording.

If this has whetted your appetite to try open reel recording, a good place to start hunting for a machine is this article in Sound On Sound.

These Reeltronix reels would look fantastic on the legendary Technics RS1500 or RS1800, or on a more modest AKAI GX-400D or Pro 1000; a pair would look great on any modern deck, and their resemblance to a pair of Comptomotive Split Rim wheels would hot rod older classic decks too. Hopefully Reeltronix might make wider tape width reels available to order for those owners of old Leevers Rich ex BBC machines or similar EMI and Studer floorstanders.

Heather says she loves the Reeltronix reels even though she hasn't got a R2R tape recorder! This implies markets you may not have considered. More than one high end manufacturer tells me the superyacht market (I kid you not) is the place for big sales that subsidise audiophile sales. These reels are like couture handbags as much as audiophile engineering, hence there are status symbol markets worth exploring. Pairs of reels, as boxed sets, are essential for this market and may keep a company afloat while mere mortal audiophiles are in recession.

The Reeltronix reels are absolute musts for analogue studios wishing to impress with their commitment to quality. The proprietor might want to superglue one to every deck on the take-up side, to prevent them walking out in flight cases! 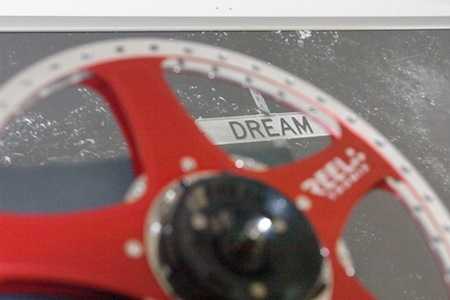