Turntable mats, the last refuge of the tweaker? 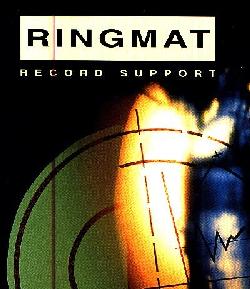 As we approach the end of the millennium all the predictions of the imminent demise of the Vinyl record seem increasingly premature, it even appears that it will comfortably outlive it's supposed replacement the CD. Paradoxically this has meant the return of tweaky aftermarket add-ons for turntables, all purporting to be the black discs salvation, sometimes I think it's not just fashions that have regressed to the '70's...
As my first review for TNT I thought this dark corner of the vinyl habit might be worth illuminating and so I obtained two turntable mats for a comparative test to see if their extravagant claims were supportable.

As tweaks turntable mats are wonderful as they take only a few minutes to swap over, and, arm height excepted, their effect is immediately apparent. The two aftermarket mats that I chose to test were the Ringmat Developments "Ringmat" and the Spectra Dynamics Deflex platter mat, both claiming to redistribute/damp vibrations in the record itself.

The first thing to say about both these mats is that they are primarily designed to replace existing mats, either rubber or more commonly felt. Nowadays an increasing number of manufacturers are following Michells lead by doing without mats at all, allowing the record to sit directly onto a hard platter such as acrylic. This is supposed to mimic the characteristics of the vinyl disk itself and often with a clamp, combine to give the effect of playing a very thick record. My own Gyrodec uses this principle so the mats were tried on this first, and then onto turntables using felt mats in the shape of a pre-cirkus LP12 and lastly a 70's vintage AR Legend.

First out of its fake and rather nice LP sleeve was the ringmat. This little item must have the lowest perceived value of any hi-fi product I've had the misfortune to come across. It consists of a 30 cm. diameter disc made of what can only be described as thin recycled card. Glued to this are thin rings of cork, two on each side, but spaced differently on each side.
I suppose that if it was sold for 50 pence then it could be said to be good material value. My wife when I informed her that it cost nearly 50 pounds gave me the "grounds for divorce" look and I retreated to the Gyrodec alone...

The Ringmat is very light so it just sat on the Gyro without disturbing the suspension, leaving me to battle with the Artemiz for 20 minutes to get the VTA on the AT33e correct (the Ringmat is about 3 mm thick). The clamp couldn't be used so I slapped the first chunk of vinyl on and listened. To be quite honest I couldn't really see any significant change. Any change that was evident was of the sort you get anyway when you fiddle about with the hi-fi/have a glass of wine, and certainly nothing I would feel safe to identify blind. This result was consistent through several records, so rather disappointed I placed the mat aside and reached for the Spectra mat.
This couldn't be more different. It's a black disc the size of an LP but about 3 mm thick, and at under 20 pounds looks excellent value next to the Ringmat. It's made of Spectra's "deflex" polymer, a bit like sorbothane, and is coated with a kind of silicone fluid to stop it drying up perhaps. This stuff I disliked as it got on my record, but more importantly discoloured my Gyro's platter.
It also weighs 400 grams, enough to throw out any suspended subchassis turntable, and I imagine cause start-up problems with feeble decks. The very flexible nature of the polymer also meant that it was difficult to centre properly so that as the platter turned the subchassis on a softly sprung deck like a "Pink" would probably wobble unless a great deal of care was applied to centreing the disc. Putting a record on was also a little disappointment. The mat caused fine details to be lost and a general softening and smoothing of the sound. In my well-balanced system I didn't like it.

To be fair the Gyro is not designed to be used with a mat so to give a fairer test I went round to a friends house and tried them both on his 1990 vintage LP12/Ekos/Arkiv. Removing the felt mat made only a slight height adjustment necessary and the Ringmat was duly pressed into service.
The effect was very surprising... The sound became more airy, the LP12 "bloom" reduced, imaging, detail and timbre became more realistic. Each improvement was subtle but noticeable, and in all made a big upgrade. It was as if you'd added a Lingo, or gone from a mid price to exotic cartridge. All the effects were positive, suddenly that 50p's worth of card and cork was looking very fine value! We played all types of music and throughout we both preferred the Ringmat to the standard felt mat by some margin. Replacing the Ringmat with the Spectra mat produced similar effects to with the Gyro.
A general softening and rounding off of the sound. Neither of us liked the effect and after giving it a fair hearing we returned with some glee to the Ringmat.

A couple of days later I tried both mats again on an AR Legend and with very similar results. So impressive was the Ringmat that both owners of the turntables used have ordered their own - the highest recommendation I can make.

So in conclusion, for any turntable with a felt mat the Ringmat is a "must try". I would go as far as to say it was essential to get the most out of a pre cirkus LP12, and on older decks it's "crisping up" of the sound would be very welcome. The Spectra Dynamics mat was a disappointment. It's more difficult to use, especially with suspended subchassis turntables, and its effect is, on the three decks I used, to lower the fidelity of the whole system. That said it is something I would be very tempted to buy! If you have an edgy system, and there are many out there, it's softening effect could be most welcome. If you don't like the effect then you have a large slab of isolating polymer, which can be used under components, or as damping pads inside. My sample is at present to be found under a slab of granite, in turn under my Micromega Solo CD player, and I feel that here it makes a worthwhile improvement :-)