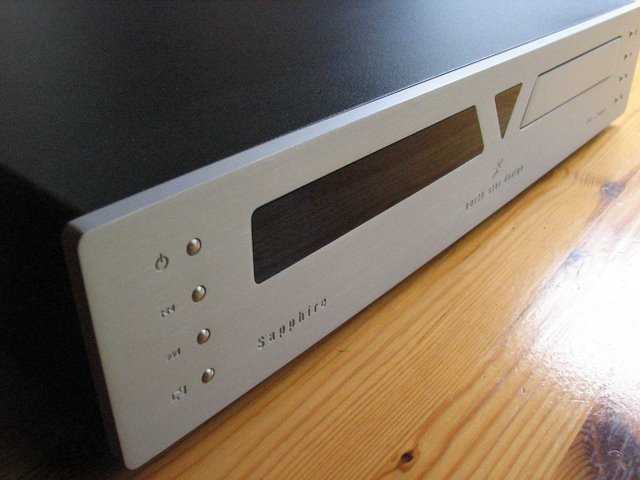 North Star is a small Italian high-end company and several of their products have already been reviewed on TNT in the past. Specifically the CD players, or the transports and DACs to be more precise, have had very good reviews, here and elsewhere. North Star also produce impressive looking amplifiers, but are most famous for their CD players. These all feature upsampling, a preference I'm not completely sure I share. But their reputation is such that I wanted to try and see what upsampling could do, when done right. 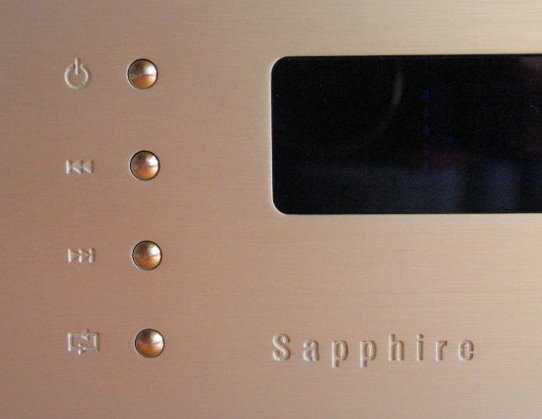 The Sapphire player looks really good, in a stylish and understated way, and the quality of the casework and the finish is fantastic. It feels extremely solid and robust, while still being relatively compact and easy to accommodate in a standard rack. The case is completely closed and nicely finished all around and looks very good on the top spot of your system. The 8 little buttons on the front are a nice touch and add to the feeling of luxury. At the back are single-ended as well as balanced outputs, but there's no digital output, showing that North Star have some confidence in the DAC that's build into this player. The Sapphire upsamples the digital signal to 196/24 and uses the same basic architecture as the famous North Star Extremo DAC.

The inside is a picture of order and organisation. Almost un-Italian, I cannot prevent myself thinking. Power flows from right to left through this machine, while the signal travels front to back. Somewhere in between they meet and numbers are converted to music. North Star take power supply very serious: the main transformer is massive, for a CD player, and has separate secondaries for the analogue and digital parts. I counted at least 12 separate voltage regulators: always a good sign. All electronics are located on a single big circuit board which takes up most of the inside. Layout is spacious and very neat. 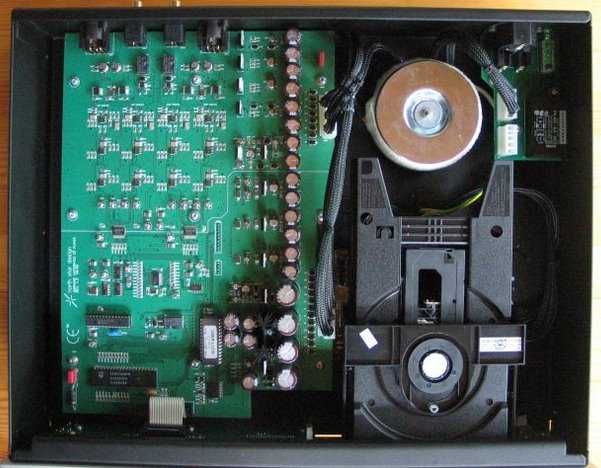 An impressive player then, at least on paper. The only problem I had with it is that it didn't perform perfectly when combined with my Electrocompaniet power amplifier. Electrocompaniet use FTT, Floating Transformer Technology, which keeps earth and signal ground separate. This means signal ground is floating and my Django passive preamp doesn't do anything to change this. The Sapphire didn't like this arrangement very much, with the control logic conking out once a day or so, leaving the player locked. When I changed to the Vincent SP-331MK power amp everything was fine. For the rest of the review period this player was a picture of excellent design, style and ergonomics.

North Star claim that the player only needs a few hours of burn in. My review sample had been used for about 6 hours and 'should be fine'. Although this is a refreshing change from the usual claim that performance will keep improving during the first 500 hours or so, it turned out that the player did need a little bit more than 6 hours. In my experience most players are more or less fine after about 50 hours, and the Sapphire wasn't an exception. 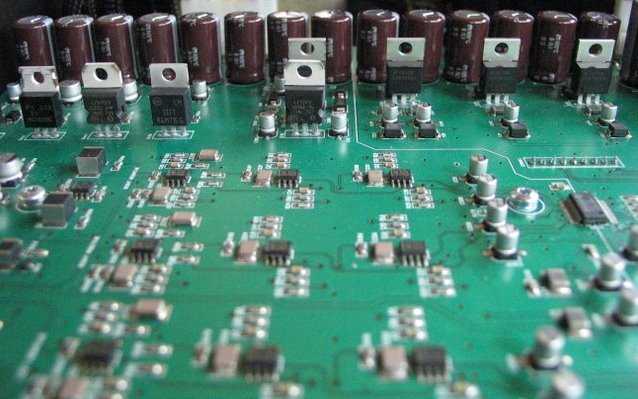 This is a player that sounds different than my own Astin Trew AT3500, this much was immediately clear. While the AT3500 is warm and rich, the Sapphire is very controlled, precise and detailed. The Astin Trew is valve-like and the North Star player more transistor-like. I don't mean that as a disqualification, as the Sapphire actually has all the advantages normally associated with transistors without the usual drawbacks. The same is true for the valviness of the Astin Trew, by the way, and these two players are both excellent and more different than better or worse. It is probably a matter of taste which one you would prefer, although I ended up liking them both, a lot.

Let's start with the bottom end. The Sapphire's is very well controlled, agile, deep and articulated. It is also quite dry, certainly compared to the AT3500, but definitely not overly dry. It sounds like nothing is being added, no extra warmth and no colouration, but nothing is being withheld either. It did show that my Astin Trew lacked that last little bit of control down below, which surprised me, to be honest, and shows that things can always be better, even if you think they're pretty good already.

The mids are clear, fast, neutral and very transparent. Almost to the point of sounding a bit studio-monitor-like, but still neutral enough to be above any such classification, really. Basically, the mids are close to perfection. The AT3500 has a bit of richness in the midrange that the Sapphire lacks, but which one is closer to the truth, if such a things exists, is difficult to say. The midrange of the North Star certainly makes a very good point for itself. Voices are reproduced with a lot of presence and realism because of this. In combination with the low noise floor this transparency allows you to listen deep into the soundstage and hear details that were difficult to discern before.

The top end is brilliant. It is crisp, detailed, precise, clean, airy, etc. Everything you would expect from a top class CD player. Focus is excellent and the sound doesn't stick to the speakers at all. Recording atmosphere and venue acoustics are reproduced in a very convincing way. It makes this player very engaging and exciting. Strings especially sound very good and more natural than you would generally expect from a CD player.

Pace, rhythm and timing are excellent too. The precision with which this player puts everything in the room helps to unravel complex rhythms without any problem at all. The leading edge of piano notes, for example, is crisp and perfectly placed. The decay, on the other hand, seems a bit shorter than with most other players I've heard. This does create more 'space' (time actually) between notes and helps to separate things in space as well as in time. It can, on occasions, also create a certain starkness. Again, if anything, I suspect that the Sapphire is closer to the truth than most other players. After all, there's also that great resolution and a very low noise floor, so it's not as if anything is being swept under the carpet.

There's an honesty to the sound that can lead to a matter-of-factness at certain times, but also to great involvement at other times. It just depends on the recording. Everything that's on the disk will be reproduced, but nothing will be added, so recordings that need a little bit of help fare less well. But good recordings are a real treat with the Sapphire. I'm not saying that it's only good with audiophile recordings, just that it is at its considerable best with very good recordings. It is actually kinder to lesser recordings than you would expect, but not to the same extend as the Astin Trew.

I did compare the single ended phono outputs to the balanced XLR ones too. My Django transformer preamp is the perfect tool for the job, as both inputs go through exactly the same transformers. Balanced is a bit louder, obviously, but turning the volume down a couple of clicks nicely compensates for that. The difference between the two wasn't enormous. The single ended outputs sounded slightly more boxed in and grainy and the balanced outputs were a little bit tighter, had slightly more spatial information at the top end and showed a fraction more depth in the soundstage. But I had to compare them head to head to really notice the difference. On the other hand, once noticed the difference certainly was significant.

This is an upsampling player, even one that goes the whole way up to 192 kHz and 24 bit. My own Astin Trew can upsample to 96/24 bit, but I prefer the non-upsampling mode, to be honest. The Sapphire shares some of the traits of the Astin Trew when that one is set to upsampling, with a certain thinness in the midrange, a slight lack of substance in the bass and a soundstage that is wider than normal. Except that in the Sapphire's case this all works just fine. Bass might be dry, but it is also very tight en deep. The mids are perhaps a bit stark, but of exceptional transparency and that wide soundstage has excellent focus, probably the best I've ever heard in my system. This set of characteristics does get to you, just like the warmth and richness of the Astin Trew, but in a different way. It brings out all the detail and really puts you very close to the music. It certainly is completely capable of producing goosebumps. A good example is 'The revelator' by Gillian Welch. It sounds fantastic on the North Star and puts Gillian and David Rawlings right there in the room with you. In general this combination of qualities works very well with classical music, where other players might fall on their face when things get more complicated but the unflappable North Star simply keeps things under control no matter what happens.

At the very last moment during the review period a set of Anti Cables and Anti Interconnects arrived. These solid core cables share some of the properties of the Sapphire, especially the precision, crispness and rhythmic qualities. The combination brought out the best in both components, and the Sapphire sounded even better than before. The difference wasn't huge, but worthwhile nevertheless. Make sure you hear this player in a system that can actually show its qualities, otherwise you might get the wrong impression. Not all systems can keep up with it. 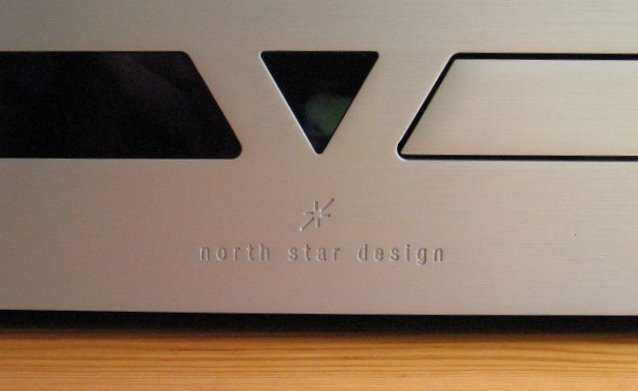 This is a very fine player. It is more analytical than musical, but not to the point where this could ever be seen as a flaw. It has control and precision in spades, combined with excellent resolution, bandwidth and focus. It is a very honest player that gets more information from the disk than any player I've tried in this price range. And it is clean and crisp, over the whole frequency range, adding hardly anything of its own. It is very involving in its own way and can get you very close to the musical event. If you're looking for valvelike warmth you might prefer something else, but otherwise this player is as good as it gets at this price. The fact that it looks great and is a joy to use is a bonus. Highly recommended.