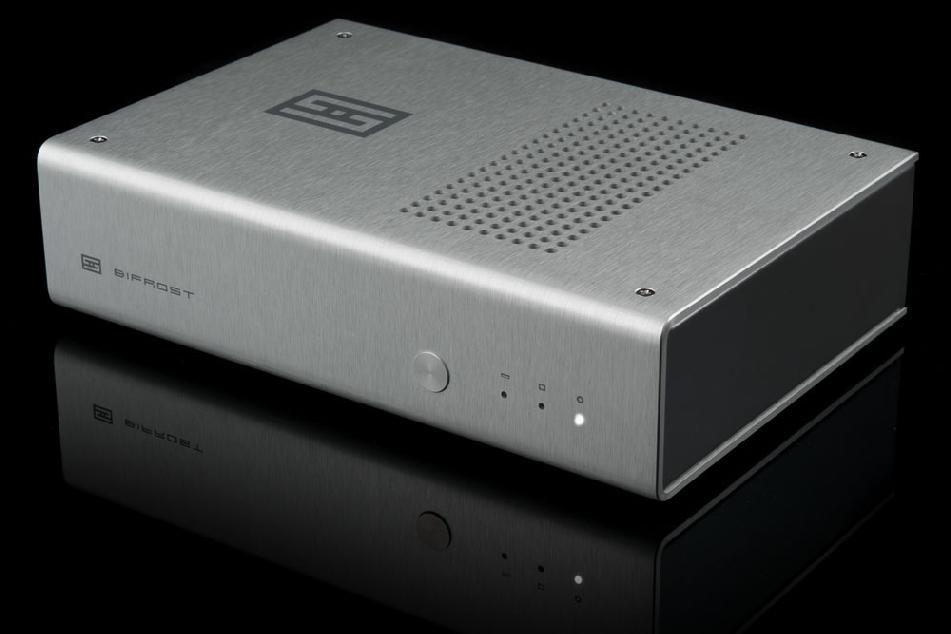 I promise not to make any jokes about the name of this product! When I decided to upgrade my music server setup I started to look around for a more audiophile type DAC. This led to the purchase of a new Schiit Bifrost unit. Schiit is unlike other audio manufacturers in that they actually seem to have a sense of humor or, if you are a cynic, a well thought out marketing plan.

From their web site:

"Schiit got started when two audio industry veterans decided it was time to shake things up a bit. The two audiophiles are Jason Stoddard, formerly of Sumo, and Mike Moffat, formerly of Theta".

Be that as it may, they are different in their approach to the usual design in the US and outsource production to China which has become the norm for so many companies. Some like Jolida do the design in the States, have the bits made in China and then assemble in the States which allows them the "Made in the US of A" moniker. Schiit do everything in the States and are truly "Made in America".

The Bifrost is well packaged with only a logo on the box. The DAC was in a plastic bag and supported by foam buffers and also included is a concise and quirky user guide. There are a couple of options, a "Uber Analogue" board for extra quality and a USB 2 board for those in need. Mine came fitted with this last as that was what was in stock.

Connecting the Bifrost was easy, although no power cord was supplied which seems a bit odd. The power switch is a simple miniature toggle switch located on the rear panel adjacent to the mains socket. This could be a problem if the DAC is housed in a cabinet as to get at it in situ one has to fumble around, sight unseen.
Inputs are USB, Toslink and RCA (I used the RCA input throughout this test) and output via standard unbalanced RCA. There is no provision for balanced lines. The front panel is is almost stark, logo and name on the left and on the right a button which, when pushed, cycles between the inputs with small LEDs indicating the selection, each one having an icon as an identifier. 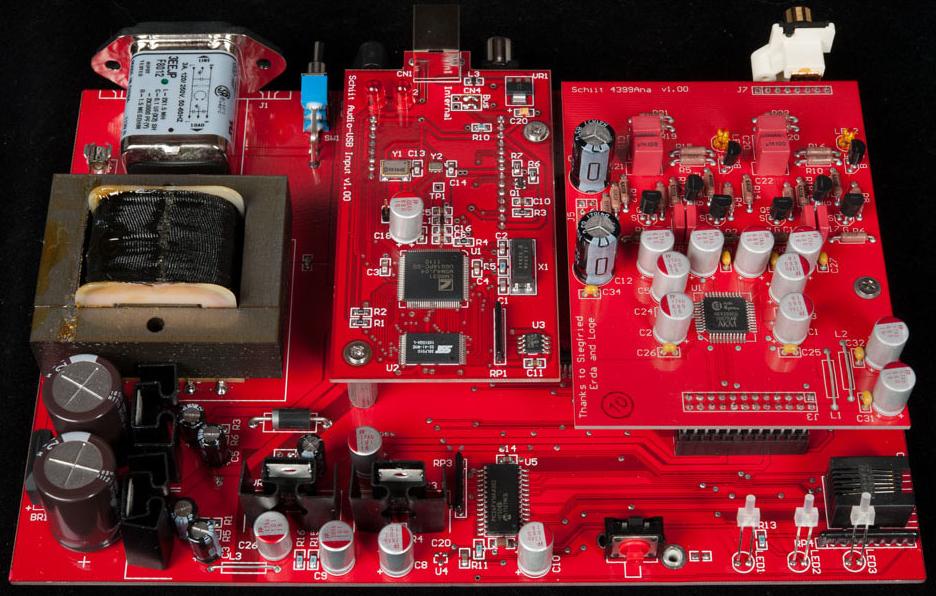 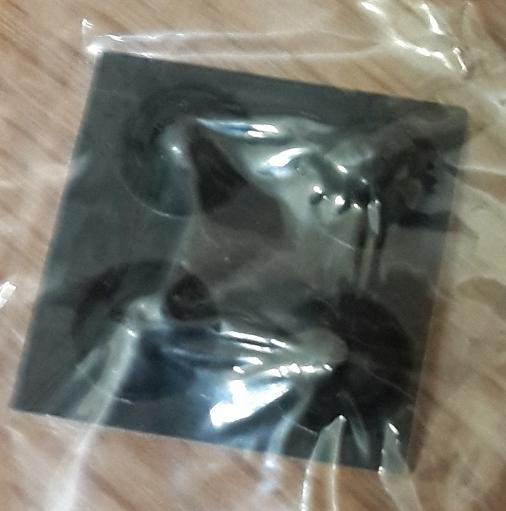 This is not a big piece of equipment at 230 x 170 x 60 mm and the weight 2.3 kg. A downside are the feet which are more suited to keeping glass from sliding around a counter top. Horrible stick on things 10 mm on a side, which were not used.

A description from their web site:
AKM4399 D/A Converter and Discrete Analog Section
Even without considering upgradability, Bifrost offers incredible value. Consider its AKM4399 32 bit D/A converter, one of the highest performance DACs in the world. Also consider that our both Bifrost and Bifrost Uber use a fully discrete, low noise JFET analog section—just like multi-thousand-dollar DACs.
Advanced Bit perfect Clock Management
Most DACs in this price range sacrifice every single one of your original music samples to get their 192kHz spec. Every input is routed through a sample rate converter and up sampled to 24/192. Bifrost dispenses with the sample rate converter and uses a sophisticated master clock management system to deliver bit-perfect data to the DAC, preserving all the original samples--whether it's 16/44.1 or 24/192.
Bifrost Uber: Even More Impressive Performance
Order the Bifrost Uber option, and you get a discrete analog stage based on the more advanced Gungnir DAC, with a sophisticated topology that improves sonic and measured performance, and a DC servo to eliminate capacitors in the signal path. Not that the base Bifrost is any slouch—it's frequently been compared to DACs that cost 3-8 times as much.
Fully Upgradeable: the Future-Proof DAC
Worried about rapidly-changing USB input technology? Concerned about future advances in D/A conversion? Bifrost's modular design uses separate, USB Input and DAC/Analog cards. The result? A virtually future-proof DAC that won't end up in the dumpster.

The unit on test is one that I purchased to replace the Behringer ULTRAMATCH PRO SRC2496 that I currently use in my music server.
Although the Behringer is very good, some grain is noticeable and perhaps the detail was lacking a bit. With simple and undemanding music and comparing directly, switching from one to the other, the Bifrost proved to be sweeter and with less edginess and initially sounded very good. The hoary old favorite "Jazz at the Pawn Shop" and solo saxophone never sounded so good. David Oistrakh on solo violin and Janos Starker, solo cello were more natural and accurate.

Progressing to more demanding instruments and works, my initial happiness with the Bifrost began to diminish. Recordings of energetic brass became almost laid back, piano works that should have been electric descended to almost mood music. Going on to orchestral works some glaring faults became apparent. The presentation became muddied and worse, it became progressively harder to differentiate between the instruments the more complex the work. Bernstein's version of the Symphonie Fantastique and also Munch's recording lost most of the impact and the bells in the last movement were almost recessed. Bernstein remarked, "And then there are spine-chilling funeral bells..".
Via the Bifrost, not. Courtesy of the Behringer, definitely. Music reproduction needs to be visceral and dynamic, here is another quote from Bernstein with a bit of perspective: "Pretty spooky stuff. And it's spooky because those sounds you're hearing come from the first psychedelic symphony in history, the first musical description ever made of a trip, written one hundred thirty odd years before the Beatles, way back in 1830 by the brilliant French composer Hector Berlioz. He called it Symphonie Fantastique, or "fantastic symphony," and fantastic it is, in every sense of the word, including psychedelic." Again the Bifrost failed badly here with most of the impact lost.

The further I delved into my music collection the less enamored of the Bifrost I became. Getting to some works that are difficult to reproduce with any degree of reality - Brian's Gothic Symphony or Mahler's 8th both of which call for large augmented orchestras, multiple choirs and organ is not for the Bifrost. Nor I might add, is any organ music with appreciable bass, because here the Bifrost is just plain muddy, heaps of bloom (or boom) and no definition. The Specs read: “Frequency Response: 20Hz-20KHz, ± -0.1dB, 2Hz-100KHz, -1dB” and if this is the case then the Behringer, the Squeezebox's inbuilt DAC and that of my Jolida CD player are very far out, along with all the analogue bits of my system.

In a last effort to try to understand what the Bifrost was doing to the music I played the same performance (Munch / Boston SO -St Saens 3, Organ Symphony) via LP, CD, XRCD and then the Server via the Behringer and lastly the Bifrost. The second and third parts of the First Movement have some very clear deep organ notes which loose most of their colour and definition in the mush when played through the Bifrost - through the others, the well deserved glory of the RCA Living Stereo recording shines through. Although I have not heard my pre-recorded Living Stereo tape on my system, listening to it on a friend's set-up just reinforces the lack in the Bifrost.

The sub title of this article is "The Curate's Egg" or Good in Parts. This DAC might be fine in a smaller more intimate system and depending on the music, provide much pleasure as it is inherently sweet. Detail is very good with what wazz I listened to, as well as softly played brass Band music. Raise the bar and add bass-drum and cymbals and the blend to mush begins. Freddie Mercury's "Bohemian Rhapsody" is another case in point, as due to the intricate way this was recorded and dubbed there are many different layers in the sound, all of which escape the Bifrost.

To say that I am unimpressed with this Schiit is understating it, especially as I had bought the unit.