A Linn Sondek LP12 has been Spoken 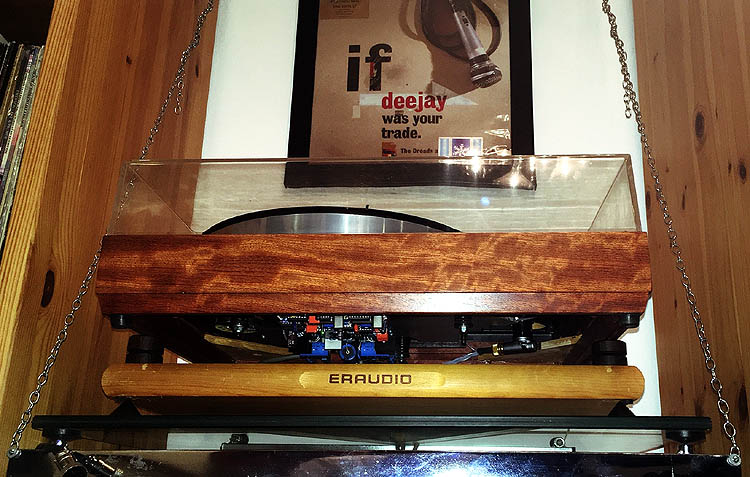 In part 1 of this epic we considered the history of the Linn Sondek's suspension design, and the heresy of presuming to improve upon it.

In part 2 of this cure for insomnia we considered the some of the changes wrought by the spoke package and their effects on a Linn Sondek LP12.

Because this is a useful context in which to consider what does what in a subchassis turntable, we'll make few excuses for returning to the subject and investigating what changes affect sound.

Read Parts 1 & 2 before committing yourself to this too.

Audio Files supplied a mat comprising 9 spaced plastic nipple nipples kept in place by a flexible sheet of polyester. The layout is identical to the original Transcriptors Hydraulic Reference, but with hard pointed chapel hat pegs in place of the small soft raised discs of the Transcriptors squidgy nipples. Platter mats have been found to interact with turntable supports as much as with any element of the turntable itself (see Achromatic review).

Standard LP12's are more sensitive to support tables than most subchassis turntables (possibly due to their inherent set-up sensitivity) and swapping their feet has been a long known modification when playing with supports. Linn Products themselves introduced the Trampolin baseboard to attempt to rescue poorly located Linn Sondek's, but this ill advised accessory merely sabotaged the positive rhythmic qualities for which Linn Sondek's are justly famous while only partially mitigating support induced colouration and smearing problems caused by ill matched support shelves. Possibly because of the presence of 3 spokes in addition to the suspension, the Spoke Linn LP12 is not only substantially more sensitive than usual to the support shelf, but also to the interaction between turntable mat and turntable support.

On the laminated glass shelf modified Origin Live Ultra frame, on a very worn original Born To Run, the supplied nipple mat is prone to considerable overhang at specific frequencies. The nipple mat atop the Spoke LP12 is also prone to a bewildering mush of unintelligible complexity at times. The slight dish of this pressing means the outer edge is unsupported on side 1 and the inner groove circumference of the playing area is unsupported on side 2. Given the proportion of discs prone to this effect, it is an issue that cannot be ignored. The stock felt mat brings more of the Linn's infamous thickening of particular bass registers but to a far lesser degree. We might guess that the different subchassis material and orientation mitigates the bass fullness of the stock LP12. Surface noise changes character without changing apparent volume or intrusion compared to a standard, glued subchassis Valhalla LP12.

The Funk Firm Achromat seems to increase accuracy while reducing joie de vivre compared with the stock mat (opposite to a similar comparison on a Garrard 401), for Springsteen. This also contradicts comparisons via the nipple mat. The Achromatic comfortably outpaces the nipple mat, at the expense of some bass weight when Compared with the felt mat. The Achromatic increases clarity, expands soundstage depth and width, increases micro dynamics, improves clarity and lowers noise.

Rolling Stones Exile on Main Street leaps from the speakers soon bellying their existence in the room. With the Achromat, Tumbling Dice bounces along with each contribution simultaneously distinct but integrated into the whole; a great achievement considering the acrimony under which this album was recorded. Reverting to the felt mat, surface noise increases but so does timbrel accuracy of the acoustic piano. The soundstage flattens, floor toms gain weight but cymbals recede. It seems that mats make more of a difference to presentation on a spoked Linn, than the difference from a standard LP12, while it is in the matters of pace and pitch that the Spoke differs from the original pre-Cirkus Linn.

The Audio Files Spoke Linn is more even sensitive to supports and mats than Glasgow's original effort so this may add to the overall investment.

Effectively based on the 1965 Thorens TD150 design, the Linn Sondek LP12 ought to be relatively immune to support furniture. After all, Thorens was rare among high-end manufacturers in that they were determined to offer less expensive models. The trickle down of high-fidelity listening into lower-income households might require less than optimum placement of equipment on sideboards and console tables. The wealthier purchaser of range topping turntables could buy purpose built cabinets. In 1965, Thorens addressed this market with the domestically acceptable TD150 which incorporated the sprung subchassis, precisely to render turntable placement simpler. Any flat horizontal surface should do, unlike their more feedback sensitive flagship idler drive TD124.

And yet the Linn Sondek, despite sharing the subchassis and spring layout of the Thorens TD150, is one of the most sensitive of turntables to what holds it above the ground. Indeed, you Old Scribe has witnessed Linns placed on the floor, inevitably gathering tumble-weeds of dust, because the owners found they sounded better there than on their generic hifi rack. A whole industry grew from the need to support the Linn Sondek correctly, with Sound Organization, Mana and Origin Live producing some of the most successful tables and shelves.

No piece may be written about the Linn Sondek LP12 without mentioning something, whether positive or negative, about Linn set up, according to an ancient piece of Scottish Common Law written on a scrap of inner sleeve and concealed, following a series of arcane clues leading from the Ring of Brodgar to Floors Road. 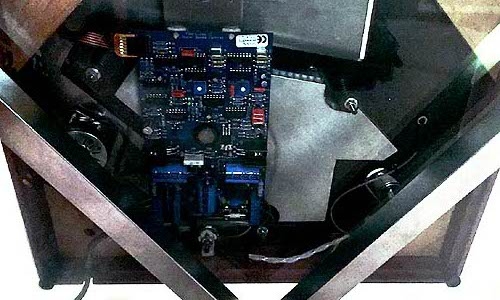 Adding another layer of heresy (watch out again for the Castlemilk Inquisition) to this review, your Old Scribe tried a Linn variation adapted from an idea first mooted by Mark Baker of Origin Live. Replacing the two rear feet of the spoked Linn with a central Yamamoto PB9 & PB10 ebony spike and receiver base and a Yamamoto PB9 spike under each front foot creates only 3 points of contact. On the 10mm laminated glass shelf that had supported the Spoked LP12four Linn feet there was an immediate improvement in clarity (as had been found with the standard LP12.

Trying the 3 feet support on the original Origin Live Skyline Ultra triangular 18mm MDF plank had similar effects, but of greater magnitude. This was similar to the effect with a stock Valhalla Linn, for which this shelf was developed and it remains one of the best executions ever, of a subchassis turntable support shelf. The MDF of the triangular plank is clearly audible, but overall this was more Linn-ey than the glass shelf. 3 points of contact are often favoured under the Linn Sondek and replacing the two rear feet of the Spoke Linn with one central foot increases clarity and reduces bloom further, regardless of the shelf material beneath.

As might be expected from the Spoke modification, it renders the Linn Sondek LP12 even more sensitive to the support shelf. Given that the whole sprung subchassis concept was designed to render a turntable less sensitive to its supporting plank, three wire bars short-circuiting that suspension, do reduce its effectiveness. The gains in pitch stability and bass resolution wrought by the Audiofiles Spoked Linn modification must be balanced by the need for even more care in placement and support.

This is a sub-heading rarely used, because we all have our own scales of values. Relevant in this review because the price changes according to iteration. At entry level the 3 spokes themselves can be installed to the existing Linn Sondek subchassis and top plate. The aerolam constrained layer subchassis will be necessary to support SME (and other heavy) arms, which also require a new arm board and relocated suspension springs. Finally, a custom solid hardwood plinth is available in various sustainable exotic hardwoods.

The modifications represent value for money when using a much loved Linn Sondek in more diverse contexts than Linn optimised systems. The improvements in pitch stability and upper bass colouration are worth the price. However, unless you're starting with your beloved old faithful turntable, or have picked up a used one cheaply, from scratch there may be better value ways to achieve turntable nirvana. Context is everything and only the spoke merits unreserved recommendation. The complicated Stage 2 & 3 rotated aerolam subchassis might be detrimental if owners are retaining or installing Ittok or Ekos pick-up arms. 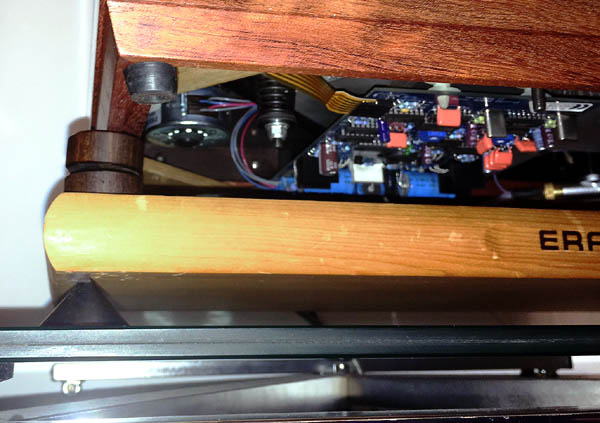 You pays your money and you takes your choice.

The Linn Sondek LP12 is still very much a Linn Sondek. There are other subchassis modifications which also maintain the qualities that keep Linn shifting units to this day and ensure a ready supply of donor units.

Predictably from such a modification, the Audio Files Spoke improves bass definition, pitch stability and rhythm. The only downside is increased sensitivity to the turntable location and support compared with the standard Linn Sondek.