Armed to the teeth 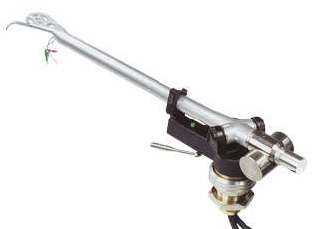 Although Michell have produced some radical arms, there has not been an exclusive arm in their catalogue for nearly 2 decades. The Tecno Arm was John Michell's final project before his untimely death last year. In order to enjoy the final year of his life he handed over the reigns of running the business to his trusty team giving him the opportunity to concentrate on the engineering R&D he really enjoyed. I met John several times over the years and always found him brimming with enthusiasm for engineering ideas. He never tried to sell me anything knowing my core business in those days was pro-sound installation, but he would happily spend time keeping me up to date with developments in domestic hifi at shows or in lengthy phone calls. So this cannot be an unbiased review as I have a declared loyalty to the designer of the product who being dead would be unable to answer any criticism.

This review is also not by arrangement with Michell. I happen to have access to this Tecno Arm as I am supplying it to someone living overseas. The packaging is just a two-part polystyrene moulding, which I applaud as I detest paying for fancy abalone inlaid mahogany boxes when all I wanted was an audio component. 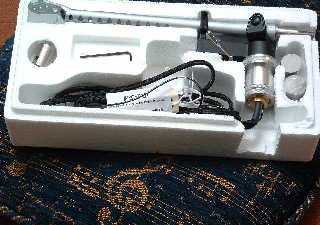 So many design flavours have been musically successful in some ways, and yet the Rega RB remains a benchmark after 20 years. There are many designs that do many things better than the Rega, but Roy Gandy's design remains the price/performance ratio to beat. No wonder a number of companies have been making performance parts to replace those Rega elements they perceive to have been pared down by cost, most commonly the counterweight. The counterweight is such a fundamental element in any tone-arm design that changing it is like putting an aftermarket camshaft in an engine, the whole character of power delivery is completely altered.

Both Origin Live and Michell themselves have established alternative offerings to the standard Rega counterweight. The Michell Tecnoweight is one of the obvious differences in appearance between the Tecno Arm and the standard RB250. There's no snake-oil & mystery involved in this counterweight, just obvious engineering refinements like centre of gravity lowered to the plane of the stylus tip, accurate screw-adjustment & locking, and good fit & finish. 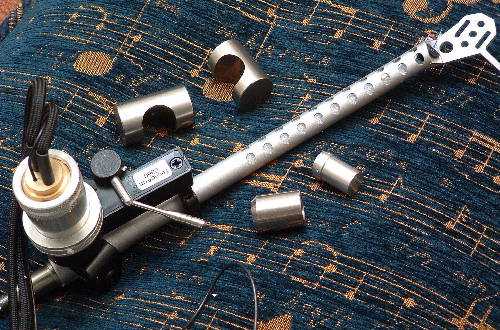 The other obvious visual treat is the bead-blasted finish and the drilled underside, reminiscent of classic racing cars. The blasting process hardens the surface. The cartridge platform is machined flat and accurately horizontal. The milled VTA adjuster is another clue to the precision engineering origins of this product. How an arm terminates the cartridge energy into the armboard may be a critical factor in compatibility between arms and turntables. Derek Whittington, proprietor of Sound Advice in Loughborough, doyen of the Flatter Earth and record reviewer for the infamous Flat Response magazine once explained to me his theory of arm termination which is as good as any I have heard. Derek suggested that most arms tend to fall into either of two types:

Derek's theory was intended to explain why the Rega sounds great on turntables like the Pink Triangle, but poor on a Linn, and why Linn arms sound great on Linn turntables but not on rigid subchasses like the Michell. Hence the Ittok's nickname "tictok" outside Linnie's circles due to its tinkly qualities on turntables other than the LP12. Preservation of vertical modulation through vertical rigidity would explain the breadth of soundstage on the Michell Gyrodecs in contrast to the LP12.

The Tecno Arm is mounted on my current spec Orbe SE in place of my usual Hadcock, and the comparison is checked on a Gyro SE with Gyropower VC psu. The Orbe is Michell's own top-of-the-range lp spinner so the Tecno Arm gets the best chance to perform. Like Geoff Husband I just go for tail-down a bit for VTA adjustment. It's a lot easier on the Michell than the Rega, but I haven't heard the mythical "everything snaps into focus" moment on any occasion, even when a VTA obsessive was trying to prove something to me by adjusting his SME V on the fly on 200g vinyl. My experience is:
Tail too-high = treble a bit splashy,
Tail-down a little = OK,
That's it; burn me at the stake for my heresy.

Despite riding the Orbe, the Tecno Arm doesn't get an easy start. My Cartridge Man rebuilt Decca London has all the structural integrity of damp tissue paper origami, resonates like a corrugated iron shack in a hailstorm, and dumps spurious energy into arms like a road drill. In the 1960s when this Decca was born, someone (I believe it was Jean Walton, a noted pickup expert of the day) described a cartridge tracking record groove modulations as like a Model T being driven at speed over a rough track. If something can rattle, it will.

My 30 year old pressing of Lou Reed's Transformer still has its £3.14 Gould's TV price sticker, so it is old enough to have been played first on my schoolboy Connoisseur BD1 kit or Transcriptors Saturn either carrying Hadcock GH Unipoise arm and Shure M95ED. The stylus plops into the run-in groove with characteristic Decca London handling noise and...
the surface noise is the lowest I've heard yet from this cartridge.
Then "Vicious" kicks in.

This is the fastest arm/cartridge combo I have ever heard. I have heard various Decca Londons in various arms over the years. My Hadcock GH242SE & Len Gregory rebuilt Blue/Maroon runs a close second and a London super Gold mounted in an Odyssey arm on The Source turntable another speed favourite. Decca cartridges are a lethal test of arms as they display bizarre compliance modes and numerous structural resonances that average arms simply fail to control.

Side 1 of Transformer is just one of those great sides where every track would be the outstanding track on anybody else's album...you would expect anything to be an anticlimax after Vicious, but Lou then drags you through the bitterness of Andy's Chest punctuated by the snappiest snare strikes ever cut into vinyl. "Follow that!", you challenge, and Lou does, with Perfect Day and the vocals sound as good as I've heard reproduced in any former system incarnation. Then the Michell plays its trump card. The bass on Hangin' 'Round feel's as tight and clear as a damped SME V. Bass, eh? Walk on the wild Side is this side's last track with Herbie Flowers famous double tracked upright & Fender bass one-man-duet, delineated by the Michell as well as any front-end I've heard before.

This vinyl front-end combination really stops and starts. Transients and decays are very well handled. Courtney Pine's Lady Day (& John Coltrane) remixes 12inch combines natural jazz tones with funked up dance rhythms. 'Fast' refers to stop-go response, not to pace. While the rhythm & timing are intact, the Tecno Arm loses out on pace to the Hadcock (and therefore the equally racey Ekos, Ittok & Aro). The Tecno Arm pace is better than the Rega RB250. For some reason the Rega arms seem to lose pace on turntables other than the Roksan Xerxes and Regas own P2 & P3 (formerly Planar 2 & 3). The Michell Tecno Arm certainly beats the RB300 for pace when either is mounted on the Gyro SE.

That hifi show 'you are there' demo Jazz at the Pawnshop demonstrates the Michell's soundstage ability. The soundstage is deeper & higher with Hadcock, but wider with Michell, and Michell turntables are famous too for their breadth of soundstage. The natural voicing of the Pawnshop recording highlights a slightly forward midrange colouration from the Hadcock reminiscent of the slight presence region emphasis of Naim amplifiers.

The Tecno Arm does not emphasise any particular frequencies, possibly because of the drilling and foam fill. Aluminium armtubes find favour in some circles, in preference to magnesium or stainless-steel, for a more natural presentation. I recall the Rivelin Eclipse designer Chris Orchard telling me that he preferred the SME 309 to the series V for this reason. A drummer friend of mine uses aluminium sticks because he finds their reflected vibration less injurious to his wrists, so perhaps aluminium has some appropriate energy controlling quality. The SME V does seem to display a harder edge to the highest frequencies compared with this Michell and it is probably a matter of personal preference.

As I plough through some of my oldest albums some trends emerge. The Michell bass resolution seems as good as it gets, on a par with the SME or Linn Ekos, and better than the old Ittock LVII; low frequency piano pitch is noticeably better than the Hadcock. The Hadcock reproduces better midrange dynamics and more seductive voices, which tends to fit the unipivot stereotype. The very highest frequencies, cymbal harmonics for example, are more precise and clear with the Michell but softer & sweeter with the Hadcock.

Overall the biggest impression is the noticeably lower noise floor, the Decca exaggerated high-frequency surface noise more effectively tamed by the Michell Tecno Arm, and borne out as I try other cartridges from Sumiko, Linn and the Cartridge Man. The Music Maker II seems too compliant for the Tecno Arm and favours the Hadcock, as does its designer.

Probably the most comparable arm to the Michell Tecno Arm may be the aluminium tubed SME 309, but Michell has the added bombast of the SME IV, although both comparisons are from memory.

I do not have Geoff's experience with the latest crop of arms and cartridges, but based on my knowledge of the traditional industry benchmarks I would say this arm is good enough to enjoy music from vinyl without audiophile anxiety setting in. Some arms do some things better at higher prices. I happen to enjoy the nimble style of the more expensive Hadcock GH242SE and especially its quick change arm-tube facility. However, I enjoy the Michell Tecno Arm and would not be in a rush to replace it.

If your musical priorities are excellent control of both frequency extremes, without analytical sterility, the Tecno Arm is more than good enough, especially with its combination of accurate but powerful bass. If low colouration and evenhanded tonality is your priority, the arrival of the Michell Tecno Arm means you no longer have to save for a SME series IV or SME V.

The Michell is ahead of stock Regas in terms of pace, but if you demand that extra pace horsepower a unipivot like the Hadcock would be the better bet, with the proviso of its slight upper midrange colouration penalty. I would probably opt for an Orbe SE fitted with a Rega RB250 rather than a full Gyrodec & Gyropower VC fitted with a Tecno Arm, if funds are really tight, but this is an invidious comparison as the Orbe combo is still more expensive. My experience of the merits of each are that money on the motor unit & power supply offers slightly more musical benefits. However, if I already owned an RB250 on whatever motor, the Tecno Arm would be a great improvement. If a deck suits Rega arms it will suit the Tecno Arm even better.

There is something remarkably transparent about the Orbe/Tecno Arm combination of low noisefloor, low colouration and timbral equanimity that just makes it a pleasure to listen to music.

I will remember the absolutely glorious rendition of Side one of Transformer long after this Tecno Arm goes to its new home. Michell now have an arm worthy of their turntables, an arm capable of making a synergistic match with models ranging from the Tecnodec, through Gyro variants right up to the Orbe.