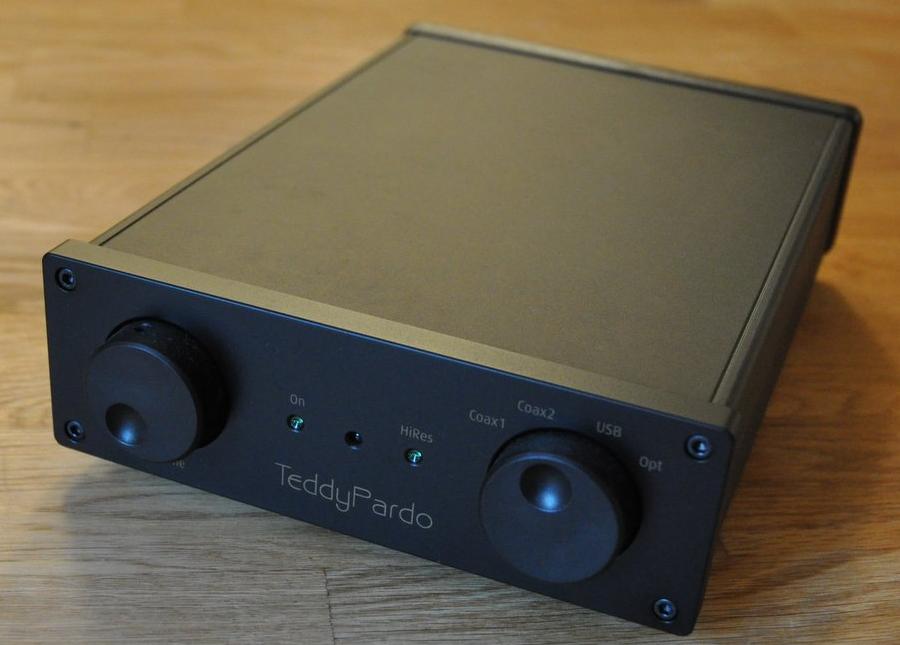 Teddy Pardo is best known in hifi circles for his voltage regulators and power supplies, but I only recently found out that he actually also produces a range of other products: amps, preamps and DACs. This makes sense, as preamps and DACs usually need voltage regulators in their power supply, and amplifier design is not miles away from regulator design anyway. I heard Teddy's full system, even including a pair of loudspeakers, at the National Audio Show last September and was really impressed with the clarity of the sound.

The TeddyDAC VC (Volume Control) is a relatively simple component, in a compact case. In spite of its humble appearance it's actually very well built, feeling really solid and using the excellent WBT NextGen phono sockets, for example. The VC version of this DAC has a variable, single ended output, enabling it to be used directly into a power amp, which is something I really like. This allows you to use it without a preamp, making for a very cost effective solution. Mine also had the optional balanced outputs, but these are fixed level, so you will need a preamp to use those. Inputs are Toslink and SPDIF, as well as the optional asynchronous USB. The front only features a volume control and an input selector, and that's it. Nice and simple, just the way I like it. There's even a remote control, just for volume.

The DAC will accept all common sample rates up to 192 kHz, even through the USB connection. It uses the Wolfson Micro WM8741 DAC chip and WM8804 digital receiver. Teddy claims a very low jitter clock and a digital filter that prevents pre-ringing. The output stages are all completely discrete JFET based, without using opamps. Teddy also makes extensive use of his famous voltage regulator: two thirds of the PCB is devoted to power supply, including no less that 11 SuperTeddyRegs. Claims like these are quite impressive, certainly taking into account the relatively affordable price of this DAC. 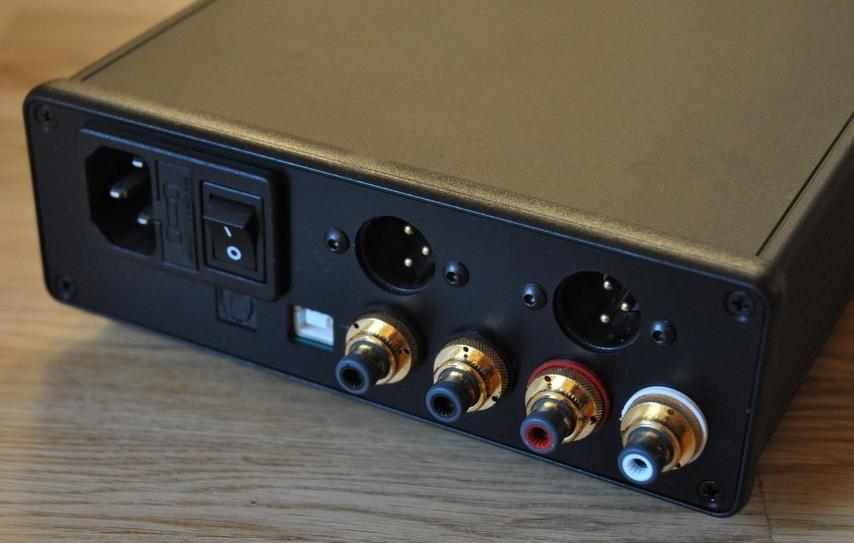 All worked very well, and without any problems. I used the variable outputs straight into my Unity Audio Rock active speakers, which worked absolutely fine. I also used the balanced outputs into my Django as well as the AMR-S transformer preamp, which were then driving the Rocks by their balanced outputs, and this worked equally well. I never had any digital connection problems, or any other trouble with the TeddyDAC. It's quiet, doesn't run hot and simply does its job.

I have to be honest and admit that the TeddyDAC didn't impress me immediately. I did run it in for about a day before listening seriously, but I thought it sounded a little bit lightweight and indifferent. Since I have two other digital sources that I like very much, my own modified OPPO BDP-105 and my Astin Trew At3500+ CD player, I tended to use these during the next few weeks and actually avoided the TeddyDAC. Then Teddy Pardo became a bit impatient as it was all taking a bit long, so I was forced to do some serious auditioning to finish the review. I cannot explain what happened, but when I sat down and had another good listen I was met with probably the best digital sound I've experienced in my system! How could I have misjudged it so badly? I don't know, really. Perhaps the TeddyDAC needs a lot of time to run in (I had it switched on and connected to my OPPO all the time, so it did get a lot of hours of use), or otherwise I didn't pay proper attention in those first days, who knows.

Whatever was going on, the fact of the matter is that this is an absolutely brilliant DAC. What I noticed first was its tremendous clarity, and not just in the midrange and top end, but especially the bass. Bass is relatively dry, but deep and precise with excellent articulation. The top end is crisper than my OPPO, and initially I thought I heard a bit of an edge, but it's actually just very clean and revealing. Soundstage is more wide than deep, but very well focussed with excellent separation. With my Unity Audio 'The Rock' speakers the sound was all behind the speakers and nicely layered. Even more important: I couldn't detect any problems or even minor shortfalls. Many strengths and no flaws, that's actually pretty impressive, even for a modern day DAC!

Overall, the presentation is clean, clear, detailed and fast, but not in the sense of 'hurried'. Actually, the TeddyDAC sounds rather calm and authoritative and never forces its own character upon a recording. Rhythmically the TeddyDAC is top notch, with a good measured pace and excellent drive, dealing with rhythmic complexities without a problem. Transients are handled brilliantly, with piano and drums sounding crisp and precise with great impact. This might lead you to think it is a DAC that excels in 'leading edge' reproduction, but actually almost the opposite is true. Not that leading edges aren't handled well, but one of the outstanding traits of this DAC is the way it does sustain. It does remind me of the effect the Belleson regulators had on my Rock loudspeakers: everything seems to sound longer and instruments seem to sing more than before. The TeddyDAC has the same quality to it. This is also helped by the refined, silky overall feel of the sound, which simply refuses to become aggressive. It must be a combination of a very low noise floor and excellent headroom that causes this feeling of sustain. This extended dynamic range also makes instruments in the background easier to hear, even behind a louder foreground. Things like talking piano players, or singing bass players, become more obvious, but without drawing your attention to them.

As an aside: when I'm talking about a low noise floor, I do not mean the DAC is quiet when it isn't playing. Obviously it is. Any half decent DAC should be free of noise when 'playing' silence. Any amp or DAC can be seen as a tap, being closed when there's no sound, and opening to produce music. When the tap opens, it will also enable noise to get through. It is this noise, which accompanies the replay, that is the problem. It is mostly masked by the music itself, so difficult to hear as a separate signal, but its presence can still have a big effect on the music. Thanks to its high quality regulators the TeddyDAC is very quiet during replay. It also has very low distortion, even during loud passages. This means the music signal is replayed as it should be, independent of level. I think it is this that makes this DAC sound so natural and creates the improved feeling of sustain: the onset of a sound, where the volume is maximal, is less distorted, so sounds less 'loud', and the tail of the sound is less affected by noise, when the volume goes down, so will sound clearer.

Before you start thinking this is a bit of an analytic DAC: tonally it's excellent too, with great separation between instruments and even between individual notes in a chord. The overall character is not specifically warm at all, but voices and instruments still have a richness that gives them a full bodied glow that's very pleasant. Don't confuse this with coloration: in this case it just means that the TeddyDAC is capable of reproducing the natural timbre of instruments. Even the top end benefits from this, with cymbals sounding bigger and brassier. Madonna's Ray of Light sounds clear and insightful without ruining the 'wall of sound' effect, for example, and Miles Davis' trumpet has the right, bright, sharp metallic tone, but without losing substance, detail or musical expression. What also struck me is that this DAC already sounds good and satisfying at lower volumes. There's less of a tendency to turn the volume up. I think this has to do with the clarity and good bass resolution, making everything very easy to hear without the need to play loud(er).

There's a confident authority to the TeddyDAC. It sounds solid and refuses to go harsh or muddy when the going gets tough. It really never lost its composure, even with dense mixes. It simply gets the two main dimensions of sound completely right: dynamic range and bandwidth. This means it feels like a wide open window on the recording, which is all you could ask of a DAC. Add in the rich, satisfying sound and the TeddyDAC is a clear winner.

This is a wonderful DAC, one of the best I've tried. It is highly resolved without being analytic, sweet while still crisp and fast, very natural sounding without becoming soft, and dynamic without becoming loud. The TeddyDAC sings and doesn't shout. It must have something to do with the power supply, and the resulting clean clock signal, but whatever is responsible this is a top class DAC for a (more or less) affordable price, especially when used straight into a power amp. Very highly recommended.