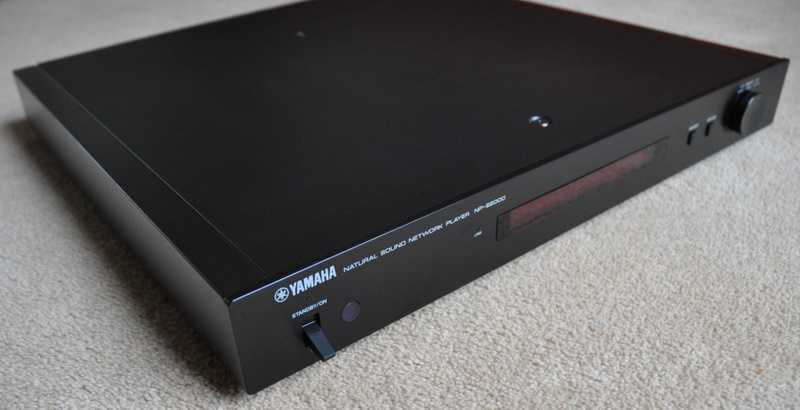 OK, I have a question for you. Two actually. What is the best way to store a digital file? Well, on a hard disc, probably. And what is the best way to transport that file to a different site? Well, over a network, of course. All very obvious. So why am I still walking across the room with a CD in my hand? Probably because I like my Astin Trew CD player, but perhaps also because in my system the alternative is putting a record on, which is even more old-fashioned and labour intensive. The more logical solution would be to store my music files on my laptop, or on a NAS, and send it to a player over the network. Networks are designed to be fast, reliable and cheap so why use anything else? As always the answer is that you need a standard, and the best standard for network based audio seems to be DLNA, which is why I wanted to try a DLNA network audio player, like the Yamaha NP-S2000. Not only is a network the best way to move digital information around, it also is asynchronous by nature, so a network audio player can request the next packet of data when it is ready for it, making sure it keeps in control of the data stream. And that makes it inherently easier to prevent jitter. The player can use its own, independent clock and simply play from memory at its own speed. All of this makes it, at least in theory, the best, simplest and cheapest solution for playing digital audio, which must be a good thing.

Back to the Yamaha NP-S2000. This is a DLNA network player, and nothing else. It's not a DAC in the conventional way as it doesn't have a digital input or any other way of providing it with a signal except for a single ethernet socket. Even wireless network isn't built in. At first this seems like a limitation, but I see it more as dedication. This machine knows what it wants to do and focuses on that without distractions. Output is more flexible, with both single ended phono sockets as well as XLR balanced ones. It even has a digital output to be used with an external DAC, if you wish, but that's it. Simple and straightforward then, this machine. And that's the way it looks too. The case is quite low, but relatively deep. It sits on 4 nice cupped feet that receive spikes from the case itself and are kept in place with magnets. The sides are even made out of wood! Quite clearly Yamaha means business with this player and aims for serious high-end credentials. That is most clear in the weight of the machine. When you pick it up for the first time you cannot belief how heavy it is. It really feels like it could almost be a slab of stone. The fact that it is also very solidly build only helps to reinforce that feeling.

Internally this machine is very impressive too. It sports double transformers, for the digital and analogue sections, for example, and Burr-Brown converters used in differential mode. I have to tell you this using the information and pictures on the manufacturer's website, by the way, as I wasn't able open the unit myself. It tried to have a look inside, but failed. This is not a good sign if you are a tweaker, but luckily this machine doesn't really need any tweaking, so that's fine with me.

The only other thing that this player can do, besides playing music sent to it over your network, is play internet radio stations. It doesn't need any other hardware for this, just an internet connection. I'm not very keen on radio, but I played around with it a bit and liked it more than I expected. It is easy to use, but Yamaha should redesign the preset list as it now only shows numbers, relying on you to remember what station number 14 represents, for example. It would be vastly more user friendly to just present a list of stored station names that you can scroll through. But that one niggle is about the only thing I didn't like: for the rest this is a very easy and enjoyable machine to use. It will accepts wav files, but also flac and a few other formats, all in resolutions up to 192 kHz and 24 bit, so there are no real limitations there.

I used it with JRiver Media Centre, which worked quite well, at least in my home. JR MC is an excellent bit of software that enables you to organise your music, and other digital media for that matter, in a very convenient way. It will even rip your CD's for you and automatically get the album cover and the track names and insert all of this in its database. Very easy, reliable and with many option to configure it to your liking. The Yamaha network player will automatically show up as a 'zone', and you can simply select it in Media Center and start sending music to it. The NP-S2000 will then show the track title in its excellent display and play the music. Very little configuration is needed for all of this, and it worked in my system in about 10 minutes, although I have to add that I already had JRiver MC installed, and had used it with another DLNA player before. The Yamaha NP-S2000 needs to be on a network cable, but your laptop can still connect wirelessly to the network, allowing it to be used from the sofa without any cables running through the room. There's even an iPhone app available for free download which controls the NP-S2000.

The disappointment came when I took it to a friend to try it in his system. I took my laptop with me and connected both the Yamaha and the laptop to his network. JRiver Media Center showed the Yamaha as a 'zone', indicating that it had contact with it and the Yamaha showed the correct server in its display. All very promising, except that I couldn't make it play anything, whatever I tried. Meanwhile a friend downloaded the iPhone app for the Yamaha onto his phone and tried with that. He managed to get music from it, but not the track he selected! After about half an hour we gave up, disappointed that we couldn't make it work. Clearly there are still problems with this technology, and to be honest I don't think the Yamaha player is to blame. It worked very well and reliably in my system. What caused the failure in my friend's system we will probably never know, but it most certainly dampened my enthusiasm for network based audio in general, which is a shame as the Yamaha NP-S2000 is such a lovely machine.

One other problem, again not one I'm sure can be blamed on the Yamaha, is the fact that I couldn't make it play gapless with JR Media Center. Both the NP-S2000 as well as Media Center have 'gapless' settings, and I made very sure everything was set to that, everywhere. Still, on certain recordings a tiny gap remained. This can be annoying: the Goldberg variations played by Glenn Gould is basically one continuous recording, but indexed to enable you to navigate the disc. When played in any CD player you don't notice anything, but through JR MC and the Yamaha there was always a short break in between parts, just enough to spoil the tension and make it unlistenable, as far as I'm concerned. Luckily recordings that are so critical in this respect are rare, and Media Center has the option of ripping a CD as a continuous track, so it can be solved, but it once again proves that network audio isn't completely mature yet. 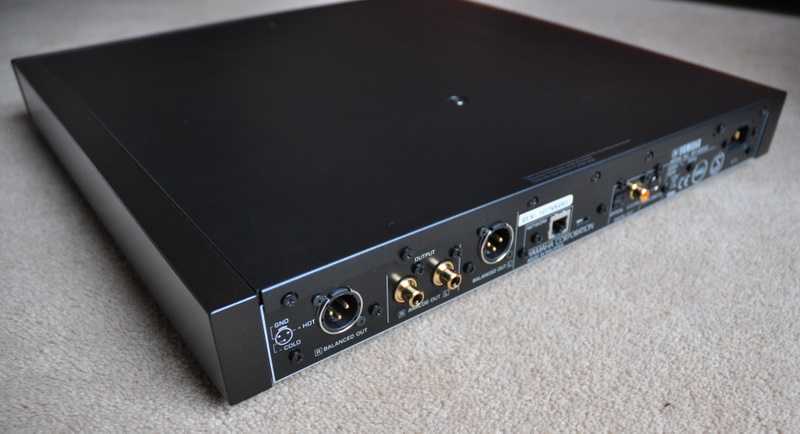 I obviously compared the Yamaha to my resident Astin Trew AT3500plus CD player, which is still the best affordable digital source I know. And it did very well. To be really honest, there's not that much difference at all. The Astin Trew sounds a bit sweeter and slightly more refined, but the Yamaha had slightly tighter and stronger bass and made the impression of getting a little bit more fine detail out of the bits and into the sound. On the other hand, the Yamaha could also sound ever so slightly brittle with some recordings, which doesn't really happen with the Astin Trew. Whether this is caused by the Yamaha being more transparent at the top end and the CD player smoothing things over a bit, or by the AT3500 being cleaner and the Yamaha still having a bit of an edge to the treble is difficult to decide. In the end it doesn't really matter, as the difference is tiny anyway and represents more of a trade-off than a difference in absolute sound quality.

When listening to the Yamaha without comparing it directly to the Astin Trew it soon became clear that it sounds about as good as you can expect things to get for this sort of money. I certainly never felt the need to switch back to the Astin Trew. As with any good, modern digital source there's very little digital edge, and this is not achieved by dulling the sound down. It does sound crisp, beefy and dynamic and works with all sorts of music and recordings. And even the lower bit rate radio stations didn't disappoint.

There is no doubt at all in my mind that the Yamaha is a top class digital source. It sounds clean, spacious, rock-solid and confident. Sound staging is very good and pace and rhythm excellent. I didn't detect big differences between the single ended and the balanced output, with perhaps a slightly more solid and direct sound through the XLR's, but still an excellent performance through the RCA's. When listening to it you cannot escape the feeling that all that mass and solidity in the case work is reflected in the sound. This player really has the ability to add some weight to the sound. It sounds as it feels, so to say, even if I don't know if there's really a causal relationship between the two.

I tried it through my Django preamp, my Usher R1.5 power amp and both my Dynaudio Contour 1.8 mk2 speakers and the SEAS Exotic speakers. I also tried it briefly with the Icon Audio Stereo 40 mk3 integrated valve amplifier, and it sounded excellent in all combinations. This network player has no preference for any sort of music, playing a Beethoven symphony with the same ease as something more contemporary from the Red Hot Chili Peppers or the Beatles. Given its grounded, physical sound it did particularly well with music that relies on a strong groove, deep bass or large dynamic swings, but it never felt out of place with anything else either.

A very good machine, and a match for any CD player in this price range. It certainly didn't have any trouble convincing me that it was just as good as my Astin Trew reference. That in itself makes it an excellent player, but the fact that is it significantly cheaper and potentially more versatile makes it brilliant value too. I personally feel that the time is not right for me yet to change from playing CD's to playing from hard disc, but if I would want to make the move, I'd consider the Yamaha NP-S2000 as one of the best ways of doing so. This is a genuinely high quality digital source that should work well in any system. Highly recommended.