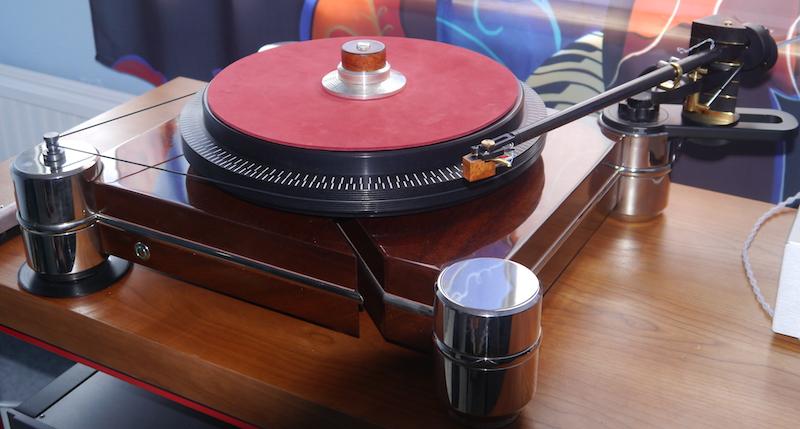 This turntable and arm combination need a health warning on two counts. Firstly, with the Ultra version on review here, it weighs a considerable 55Kg, therefore it is easy to hurt yourself during installation. At this price level you have every right to expect the dealer to demonstrate and complete the installation and indeed that was the case here. Secondly, once installed, you may fall in love with it and won't want to let it go, so your bank balance is going to be significantly depleted! 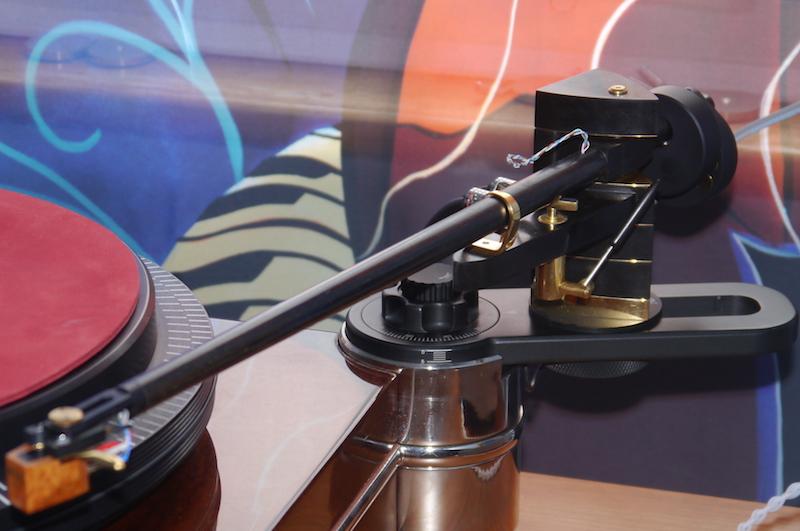 Close up view of Delta arm.

The ZONTEK combination delivers some engineering solutions I have never experienced before. The Delta tonearm is 14", not your regular 9" or the usual longer arms at 12". The second rare feature is the magnetically levitated platter. This platter does not rest on regular thrust bearing, but is held up by magnets. You can prove this easily, just press down on the platter and it will move down, but only a few millimetres and then spring back as soon as you let go..

The use of magnets is not restricted to the platter. The Delta arm employs a one sided magnetic suspension that delivers no bearing resistance (there are no bearings) and a precise control over anti-skating.
The anti-skating is adjusted using a knurled knob at the base of the arm pillar. The Delta arm I had is made from solid black ebony and bronze with some of the parts plated in gold. Rhodium and silver plating is also available plus the arm can also be ordered with an effective mass to suit the cartridge within a range of 14g to 30g.

The turntable can accommodate up to three arms so if the funds permit you could have 9", 12" arms as well as the 14" Delta.

The Delta arm has RCA phono sockets at the base of the pillar allowing you to use your favourite interconnect cables. It came with a cable with a built in earth wire available from Y.Tome.
If you use a regular phono cable you will need to fit an earth wire from the terminal on the base of the arm mount to the phono stage or you will suffer from mains hum. All turntables, irrespective of quality and expense, must have a solid foundation.
Normally my turntable is mounted on a wall shelf screwed to a solid wall, timber and plasterboard walls will not do. When Greg from GPoint Audio delivered and installed the Zontek it was immediately apparent that as the Zontek is significantly larger in area than my regular turntables it would not fit on my wall shelf.
I also doubt my shelf would be able to support the 55Kg of the Zontek. Do take this requirement into account when considering any turntable.

We placed it on my Rogoz Audio table, a seriously well built and very heavy audio table. Unfortunately as the floor in my second-floor listening room is of conventional wood construction the turntable became very sensitive to floor bounce when anyone walked around the room. 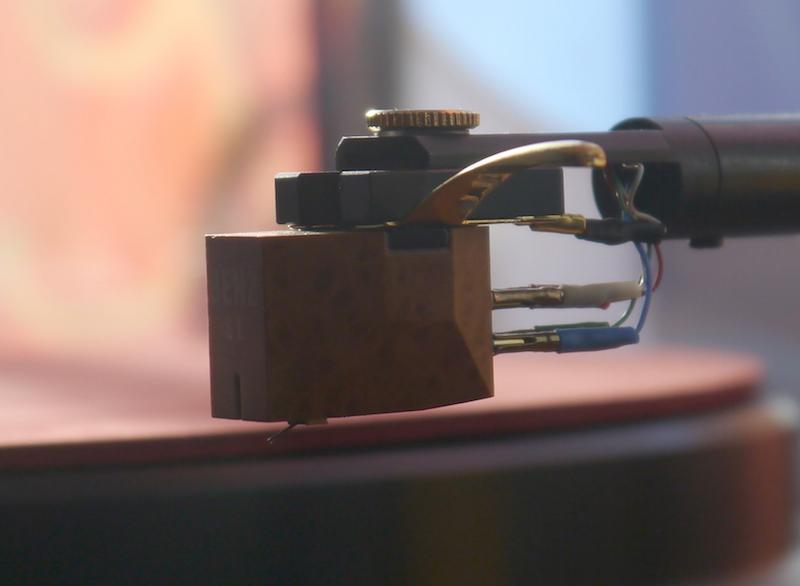 Close up view of Delta headshell.

Fitting the cartridge is made relatively easy with the removable mounting plate. This plate is then fixed to the end of the arm using knurled headed bolt that you can see in the closeup picture above. The cartridge is simply bolted to the mounting plate then the knurled nut slips through a slot in the end of the arm. The slot then allows you to align the cartridge by moving it forwards and backwards or rotating left and right.

There is a special alignment jig supplied with markings on that you place the cartridge on that indicate of there is too much overhang (forwards and backwards) with parallel lines to line up the left/right rotation. This a is a familiar procedure for regular turntable users when fitting a cartridge.

The last step is to set up the tracking force, a bit more tricky than with regular arms. Your scales must allow the cartridge to be placed as if on a record, so many of the thicker, digital scales will not work. Any scales thicker than about 5mm lifts the cartridge up too far and the tracking force is reduced. I guess warped records would not work well with the ZONTEK and Delta combination.

Listening to the ZONTEK & Delta

Setting up the ZONTEK and Delta takes about 30mins for an experienced user. Now we are ready to listen and first you need to get accustomed to the long startup time of the platter. Leave the platter running, as lifting the record on and off as it spins is the best way to save the start up wait.

Once the platter is up to speed it is very stable. As supplied, the ZONTEK was fitted with one belt, you can have up to three if you want a faster start up. The speed is set using an adjusting knob on the side of the motor section and is infinitely adjustable between 33 and 45 rpm. The drive motor is DC and extremely smooth with no obvious vibration.

The first exposure to the ZONTEK/Delta was an audio revelation, the lack of background noise appeared to be an order of magnitude better than my regular vinyl spinners.
I have always used a 9" arm before so the reduction in tracking error from the 14" Delta arm was also something of a revelation. As I started to dig through my record collection, the experience became addictive.

David Bowie and "Hunky Dory" from 1971, a second hand purchase so a little worn, played as if it was fresh from the press. The pops and crackles you expect from such a vintage recording seemed to have faded. I don't mean the noise had vanished, just that it was not so obvious, leaving Bowie to shine through in all his glory.

I could not resist digging out my very first record purchase, the Carpenters and "Close to You" from 1970. The first track on side one, "We've only just begun", still has the click on at the beginning, but as soon as the music started it didn't seem to matter. The wonderfully rich and silky voice of Karen Carpenter overwhelms you and I was swept back to the 1970s.

During my time with the ZONTEK I used several different amplifier combinations although the Whest phono stage was common. Whatever setup I was using the affect of the ZONTEK was to make it unimportant, the music of whatever genre stepped to the front and grabbed my attention.

This reminded me of Ivor Tiefenbrun and his statement from the 1970s where he proposed the front end of a system should be where you spend your money. He would say this as he was promoting the iconic Linn LP12 turntable.
I used to own the classic combination of LP12 and Ittok arm, it was good while it was maintained by my local dealer, but never really excited me in the way the ZONTEK does.

Again back to the 1970s for Genesis and "Selling England By The Pound", the early line up with Phil Collins in the background on drums and Peter Gabriel leading the vocals. This is classic early Genesis, with lots of complex instrumental passages that the ZONTEK, Delta and my Benz Micro Wood cartridge delivered cleanly and with good instrument separation. My Benz cartridge has never sounded so good, the ZONTEK really allows the Benz to show off.

My final vinyl experience with the ZONTEK/Delta/Benz setup was something much more up to date. Diana Krall and the ""Doing All Right" album, a live recording from the Jazzaldia Festival, San Sebastia, Spain in 2008. Now you would think that this very modern recording would really allow the ZONTEK and Delta to show their best traits.

In practice the ZONTEK demonstrated what should have been a top notch recording was in fact only average. The performance from Diana and friends was to their usual high standards. It was as if there was a curtain be me and the artists.

At 9,900€ you may consider it hard to justify this level of expense to enable the playing of what is now old technology. Records might be old technology, but sales are on the rise again and there are plenty of artists releasing on vinyl as well as the digital formats. If you are going to consider a purchase like this you must provide the right foundation on which to install it. You also need to budget a suitable amount for a cartridge.
I have heard the ZONTEK sound wonderful with the classic Denon DL103, the minimum starting point I believe.

If you do take the leap, you are not going to be disappointed. The build quality is superb and the ZONTEK plus Delta really do look the part. Looks, along with the rest of your system, will fade into the background when you play your first album. The ZONTEK combination will grab your attention, draw you into the music and never let you go. Be prepared for a very late night listening session when you are first exposed to the magic of the ZONTEK.

Is the ZONTEK the perfect turntable, well no, it does have it's weaknesses?
To set the speed, there are the strobe markings around the edge of the platter, but no illumination. I had to go and find a suitable table lamp for this duty. You would think at this price point built in illumination for the strobe would be provided.

These are minor irritations compared to the magic the ZONTEK and Delta weave with the music. You soon adapt so as to avoid any issues. Compared to some of the heavily engineered turntable offerings available today this relatively in inexpensive, so if you are in the market for a turntable at this price point, I strongly recommend a demonstration. 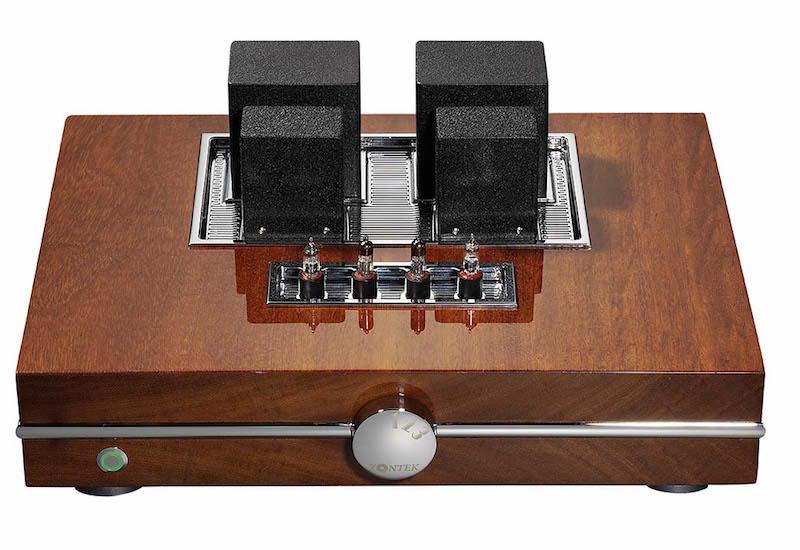 As I was finishing this review I got an update announcing the release of a matching phono stage with 3 inputs. This phono stage allows you to fit the ZONTEK with 3 arms and switch between them as desired. The "Art Deco" uses Russian miniture military triodes with ZONTEK' own ebony tube dampers. The PSU is separate and the phono stage matches the ZONTEK turntable in looks. As with the turntable, there is a weight penalty for all this sophisticated elegance. You need to support a phono stage and PSU weighing in at a mighty 25Kg.
I might need to borrow the ZONTEK again to help me evaluate this lovely looking phono stage!