I admit it. I have been a recorderhead and I still am. In the early 80s I got introduced to the world of music, or was it audio?, courtesy of a friend who remarked that Nakamichis were the things to have. Since then I've owned various cheap TEACs (junk), lower-tier Nakamichis (overpriced), a Sony DAT (why oh why???), and now a Tascam DV-RA1000 DVD recorder (almost fine but sadly unreliable). I used these mainly to copy LPs, saving my albums from unnecessary wear: a good reason, but so timeconsuming and quite irrelevant since I got my first MC cartridge, a wonderful DL-301, back in 1988. 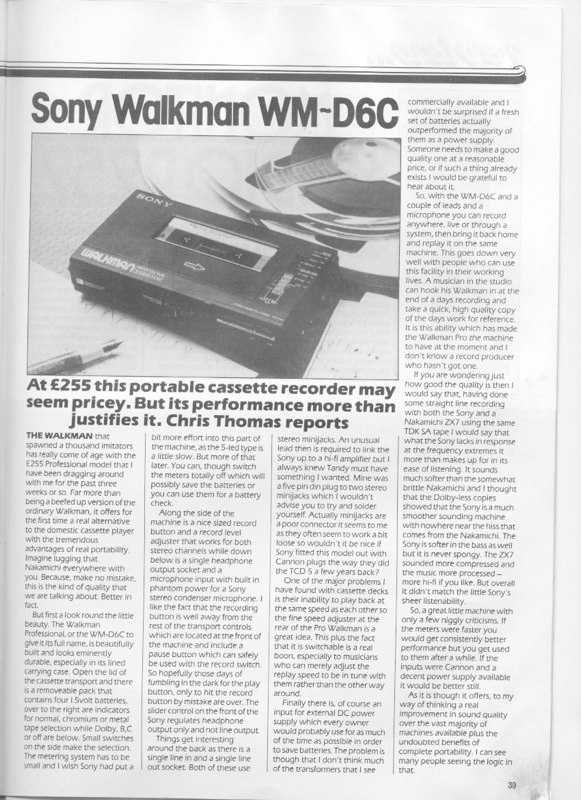 Next to my quest for the perfect(ly useless) home recorder I've also had a certain fondness for portable gear. In the early 90s I hung around a number of local bands and occasionally taped performances, whether legal or not. This was done, not with the legendary $600 Sony WM-D6C 'professional' Walkman (surely the only Walkman that ever got a formal review in the extremist The Flat Response magazine!), but with its smaller sibling the $300 WM-D3. I bought that one based on exultant mag reviews, back in 1993 while visiting Boston. It was an utter piece of junk, incapable of maintaining a steady azimuth, and with internal signal levels that could be set for either decent playback or decent recording with Dolby, but never both. With that D3 I had the original Core Sound Binaural Microphones. After the unlamented demise of the walkman I gave these mikes to Geoff Husband when he expressed the wish to record a local band he got involved with. (Come to think of it: how about a status update, Geoff?). And my luggable Nakamichi 550 was sold off for 10 euro to someone who subsequently ran away with. And very fast at that. My recording ambitions seemed to be gone.

Phew. Such a long-winding introduction to justify what I'm reviewing now: the spiritual heir to the Sony WM-D3, the audio equivalent of a point and shoot digital camera, the Zoom H2 four-channel solid-state digital audio recorder.

It has been on the market for a while, mainly intended for reporters, sound hunters, and live music recording. There are numerous reviews on the 'net that address these applications. (See here, here, and here.) What I intend to do here is shed some light on more audiophiliac and technical applications.

I my case I see two such applications. First the more traditional one of capturing analogue sound from a source such as a turntable or a radio tuner, followed by the processing of the recording on a PC and the generation of CDs, DVD-As, audio DVD-Vs, or MP3/AAC files. For this application it is mandatory that the recording device interfaces easily with the system and has good-sounding input stages and ADCs. Then there is another more exotic application. You see, I do make a lot of measurements in my system. Whenever setting up a cartridge, evaluating a motor speed controller, or testing an amplifier prototype I record signals and bring them to a PC for further analysis (THD measurement, wow&flutter demodulation, ...): you've seen samples of this in my more recent cartridge reviews. Normally I use the big Tascam recorder for this, but this DVD-based flow is rather cumbersome and the recorder is so deep that,in my equipment rack, its backside is near-inaccessible, making test connections to it a real chore. A small portable recorder with decent interfacing to system and computer, without risk for ground loops, and low-noise wide-bandwidth capabilities would come in handy here. Would the Zoom comply? 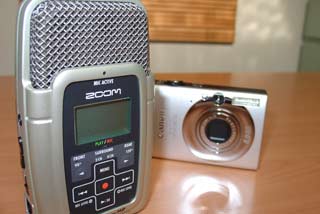 The Zoom H2 is a handful of gear, looking a bit like a vintage large-diaphragm microphone. It doesn't weigh a lot, certainly when there are no batteries in it, and overall it feels rather plasticky: it doesn't bring (materialistic) pride of ownership the way even a cheap Canon Ixus does. But generally it's OK and perfectly serviceable. The controls are reasonably simple and intuitive, even while the display is very small.

The upper part contains four tiny microphone capsules, two front, two back, and the sides carry the input/ouput ports for power supply, headphones/line-out, external microphone (2 channel), and line-in. The bottom has a slot for standard SD cards, up to 2GB.

The Zoom records WAV files at nominal resolutions of 16 and 24 bit, and sampling rates of 44.1kHz, 48kHz, and 96kHz. You can also record in MP3, which is good for very long runs. The recorder comes bundled with a set of earphones which I didn't even try. Using iPod earphones I gave the playback capabilities a quick listen: watery, dynamically challenged, grey, not something you want to use for everyday music listening, but then that is not the intention of the Zoom H2, not at all.

Let's move over to recording from line inputs and then we hit a snag, and a big one. There is no way to set recording levels. Oh, there is a level control in the GUI, but that one, can you imagine?, operates in the digital domain, after the ADC. That means that the analogue input signal has to occupy just the right range: too loud and the ADC clips with horrendous distortion, too low and resolution / signal-to-noise-ratio suffer. In short: you have to 1) be lucky, 2) use a phonostage with volume control (AQVOX) or at least switcheable gain (Trichord Dino, Lehman Black Cube, Trigon Vanguard, ...) or 3) put some sort of level control between source and H2. This is annoying, but even more, it is unforgivable that Zoom don't mention this clearly in the user manual.

I measured the input signal range: 630 millivolts RMS on the line input will drive the recorder to 0dBFS peak. For reference, the maximum RMS output of every CD player is at least 2000mV. Frequency response is quite flat, -0.5dB at 25Hz and 20kHz in 96kHz sampling mode. I measured the recording signal to noise ratios for various sampling rates, with shorted inputs: 86dB unweighted both in 96kHz/24bit and 44.1kHz/24bit modes. In absolute terms this is fairly poor, failing even the requirements for an ideal 16 bit system (96dB SNR), but it still betters any cassette recorder and performs at the level of affordable USB or FireWire computer audio interfaces, and as such can be used for simple audio measurements to.
Moreover, the Zoom ADC's noise spectrum looks quite clean and generally does not reveal the presence of the DC/DC convertors internally used for the power supply, except for (sometimes) a small peak at 30kHz. Listening to the noise we learn that it sounds a bit whiter-than-white, without any periodic patterns, thumbs, or glitches standing out. This is good: it means that while the noise is a bit high in level, its character is quite innocuous.
All the same, we have to conclude that using 24 bit mode is not likely to bring any benefit and only costs more memory: stick to 16 bit unless you feel the number '24' itself has kabbalistic properties.

The channel seperation of the stereo line input was also assessed, clocking in at 73dB at 1kHz, worsening to less than 60dB in the deep bass and high treble. Again this is only fair but perfectly sufficient for a portable device and don't forget that even the very very best phono cartridges offer less than 40dB of separation. 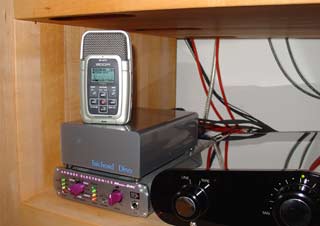 Now how does it sound? For this I connected the Zoom H2 to the variable-level single-ended outputs of an Apogee MiniDAC. I recorded sections of CDs at various sampling rates and then imported them into Audobe Audition for very precise gain-matching. Later a CD was burned with the original tracks next to the Zoom-made recordings, and these were then auditioned again through my normal signal chain of Denon/Apogee source, the magnificent Michell amps, and the Quads. I also did something similar with LPs from the Orbe. For further evaluations I used a new DIY headphone amp and my AKG K-400 headphones, this time off my PC with Terratec soundbox.

So, how then does it sound?

The short answer is: actually quite good. If you have anything against nit-picking I suggest you stop now reading this review and start doing something more useful.

Still here? So I take it you like picking nits. Here we go.

In tonality, stereo width and depth the recordings broadly matched the CD original, with a total absence of any nasties or blatant omissions, surely a good result. However, dynamically the Zoom flattened the proceedings a bit, taking some life and freshness out of the music, while the upper bass sounded somewhat homogenised and less solid. The result was a sound that on first inspection is rather good, but ultimately amounts to a watered-down version of what it could and should be.

This may sound like a stern verdict, but it has to be placed in the proper context. The Zoom produces a sound quality that is entirely at the level of my TerraTec Phase 26 and M-Audio FireWire Audiophile 2496 computer interfaces, but in a much handier package and with a set of reasonable microphones thrown in.

I actually wanted to publish 128kbps MP3 files made of the CD source and of the Zoom recordings, so that you all could judge for yourselves. In the end this did not go through as the difference between CD and Zoom recording was much less than that between the raw CD and its MP3 version. I guess that this gives you an idea of the H2's qualities.

Then purely for fun I made a microphone recording of my system in the living room belting out some music at a reasonable level. This didn't sound half bad and certainly better than what I was wont from my old Sony/Core Sound combo, althought the resulting image was next-to-mono, due to the four meter distance from the speakers and the Zoom microphones' limited separation.

The Zoom H2 offers a decent recording quality, combined with a reasonable build quality and some strange functional quirks (the record level issue). Above all this is an affordable and handy tool for anyone wanting to make the occasional recording from analogue sources.