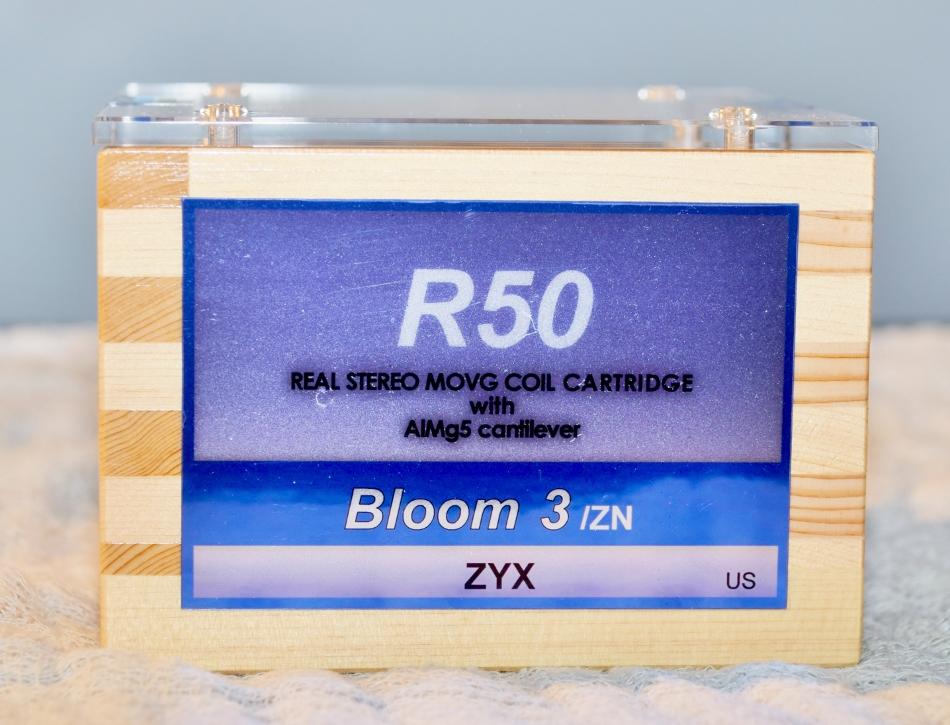 A worthy competitor in its price segment

This is the first ZYX phono cartridge to be reviewed by TNT Audio so here is a bit of an introduction to this company. ZYX is based in Japan and was founded by Hisayoshi Nakatsuksa in 1989. Mr. Nakatsuka is the President and Chief Engineer of the company. The name ZYX is derived from the elements – Time (Z), Amplitude (Y), and Frequency (X). SORAsound has sold ZYX products since 2003. ZYX also produces some cables, phono stage amplifiers as well as a few small phono accessories such as headshells.
The North American ZYX cartridge line includes the Universe Series consisting of 2 models, the Ultimate Series of 6 models, the Bloom 3 which is the object of this review, as well as a set of 3 mono cartridges. The 10 stereo cartridges offered range in price from the entry level Bloom 3 at $1100. to the Universe Premium at $15000.
ZYX has learned well the lessons of survival in the high end audio business and periodically updates their product line with new or improved versions of their cartridges. The latest edition of the Universe models features a cantilever composed of 1000 pieces of composite carbon fibre. The Bloom 3, as provided for this review, is also an updated version with a new design rigid aluminum cantilver.

The Bloom 3 shares the same body style as the Ultimate 100 and the Ultimate Airy which are the next two steps up the ZYX product list. The body is a pale translucid blue plastic which reveals the internal assembly. Being able to see the guts of the machine is something that I personally like. The front of the cartridge is square and basically perpendicular to the cantilever which is useful in order to rapidly home in on the preliminary cartridge alignment. The cantilever protrudes out of the body long enough to facilitate alignment directly from it. This is the way that SORAsound recommends that the fine adjustment of the alignment be performed as there could be a slight difference from perfectly perpendicular between the body and the cantilever. This information was found on the SORAsound web site which includes an FAQ page on the ZYX cartridges with a lot of useful information regarding setup and use. The Bloom 3 cartridge came to me in a very sharp looking wooden case with a transparent top. The cartridge was mounted on a gold coloured plate and under the plate one finds a cleaning brush, a tiny screw driver and some mounting screws. I received in a separate envelope a booklet of several pages in very glossy paper which includes design information and specifications.
I have owned a ZYX Universe for a couple of years. My Universe is a demo unit that was purchased from SORAsound upon it's return from an extensive audition period. (The audition was not with me) 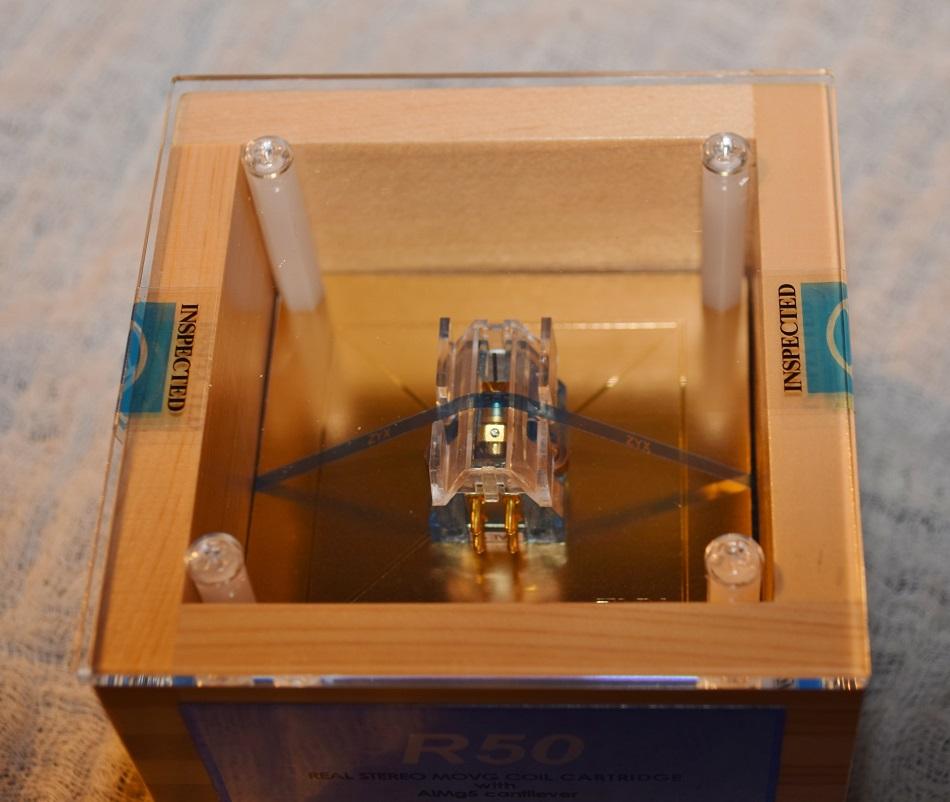 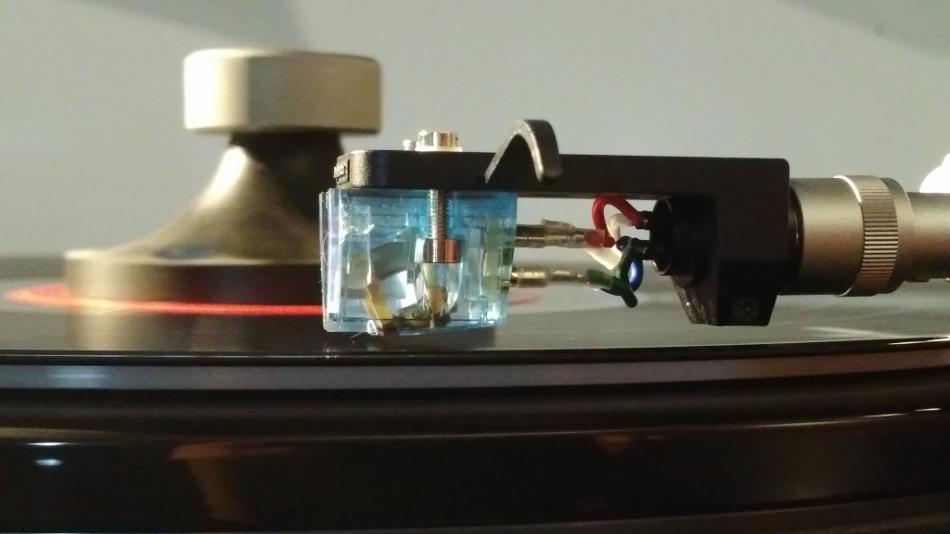 The model received was the 0.24mv version which is the same output level as the ZYX Universe that it replaced in my system during the review period. I mounted the cartridge on a backup headshell which is almost identical to the one that the Universe is mounted on. There was a slight difference in weight and height so switching from one to the other required small adjustments to the tracking force and the vertical tracking angle (VTA). The only other changes made in my system for the Bloom 3 testing was to switch the input resistance on my preamp from the HR (high resistance) to the LR (low resistance) setting. Contrary to my ZYX Universe it sounded better on this setting. The setup was done quite quickly and easily. As mentionned in the previous section, the shape of the body and cantilever makes it fairly simple to do. The initial listening time was done with the VTA set to horizontal (no tilt up or down in the tonearm) and the tracking force set to 1.98 g. as measured with a digital tracking force guage.
The first few hours of play time were thrown out as break-in time. The sound was definitely unimpressive which was pretty much what was expected for a new cartridge fresh out of the box. The overall sound was somewhat dark. The initial play time was done with the step-up transformer on the 30-100 ohm setting. There was some improvement in the overall tone when the setting was moved to 100-300 ohms. As noted above ZYX recommends greater than 100 ohms.

The performance of the cart improved over time and it was deemed ready for some serious listening after playing a few albums. First some comments about the general performance characteristics. The Bloom 3 runs quite silently in the groove with no music playing. It has been my experience that the higher the price of the cartridge, the more they seem to be able to ignore a lot of the dirt and imperfections in the grooves that cause the snap, crackle, pops. The only explanation that I have been able to come up with for this is to attribute it to a more sophisticated stylus grind. If any readers have some thoughts or experience on this topic please send your comments to TNT or send me a note. In the case at hand, the Bloom III performed well but not as well as my Universe, confirming my previous experiences. Also of note is that the Bloom 3, when mounted on my Dynavector 507 MKII tonearm, seemed to be insensitive to minor variations in tracking force and VTA. Something that many potential buyers may appreciate. For those who love to spend endless hours tinkering with these parameteres to see if they can squeeze out a bit more performance; well tinker away, no harm in trying.

The first record played for serious listening was Steely Dan, Gaucho. The Bloom 3 exhibited a gentle touch and a smoothness that is also a characteristic of my ZYX Universe. As I have not heard the rest of the ZYX cartridge line I cannot say that this is indicative of a ZYX family trait at this time. On "Time out of mind" the drums lacked a bit of the oomph I am used to with the ZYX Universe. It is appropriate to add that its not really fair to compare the Bloom to the Universe as they are really quite far apart on the product scale; an $1100. cart vs. a $6000. one! I have included some comments comparing to the Universe because I don't have a price comparable cartridge and haven't had one in this price range for a few years.

Next up was Grant Green, Idle Moments, one of my favorite records. The guitar solo on the title track sounded quite nice with good tone and detail. A bit less air than I am used to. The bass on this track is on the mellow side and sounded that way with the Bloom, a bit lighter than with the Universe. The Bloom of course doesn't have the extreme precision of the Universe, nor would it be a realistic expectation, but it does carry a lot of the Universe DNA. The sax solo was very good as were the vibes. There was a bit of a drop in airyness on the piano solo.

On Hayden's string quartet, Sunrise, the Bloom makes an effort to resolve the the more complex passages with some success but a bit short of what higher end carts are capable of. The result are good but not great.

The Abdullah Ibrahim (Dollar Brand) record, African Dawn sounded quite good overall, so good that I sat back and enjoyed the whole album. The mid-bass and the mid-range were the strongest areas and, as with Idle Moments, the piano, especially the top end, lacked the big sound I am accustomed to from the Universe.

There is a characteristic of stereo equipment for which I have some difficulty assigning an adequate one word adjective. It's the point where the component starts sounding less like an electronic transducer, or in the case of a phono cartridge an electromechanical transducer, and starts sounding more like a musical instrument. This of course is something that occurs on quite varying levels for different components. I set the bar quite high for evaluating such performance characteristics. The Bloom 3 does get to the threshold of this level of performance from time to time. Just a foot in the door. I think I will call this the Naturalness Threshold.

Overall, the Bloom 3 does everything well. It's smoothness and gentle touch which I recognize and enjoy from the ZYX Universe, as well as it's precision, clarity and naturalness warrant a place on the short list of any one looking for a cartridge in its price range. Also noteworthy is its ease of installation and setup and lack of over-sensitivity to small variations in tracking force and VTA. It falls a bit short on soundstage definition, dynamics, and the naturalness and airyness that one finds in higher priced cartridges.