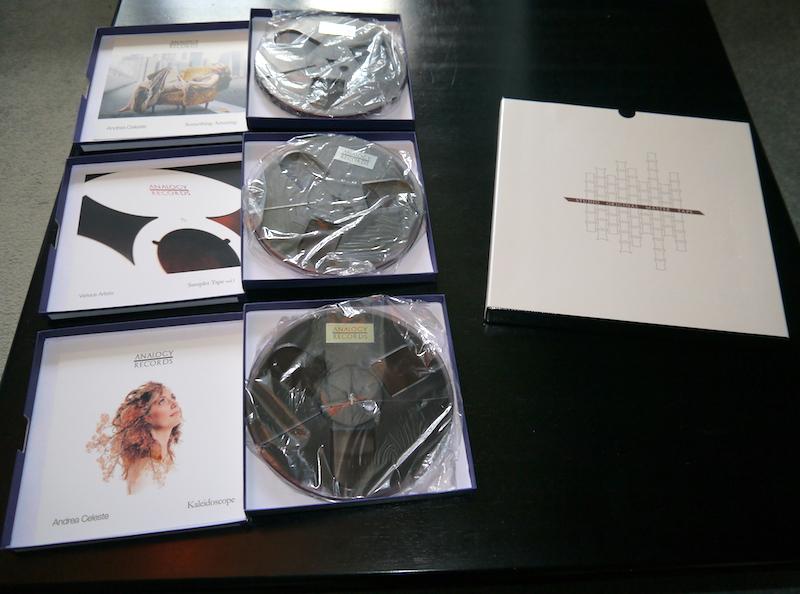 In recent years we have seen the rise in interest in vinyl replay, records as we used to call them, and they are even available in some of the larger UK supermarkets, amazing. Thanks to Analogy Records we now have the return of reel to reel pre-recorded tapes, but not the mass produced tapes of old, studio master tapes made directly from the studio multi-track master. The goal of Analogy Records is;- "Recordings of the highest quality with care in the microphone techniques, with creative mixing, to deliver a recording that arouses the emotions of the listener". 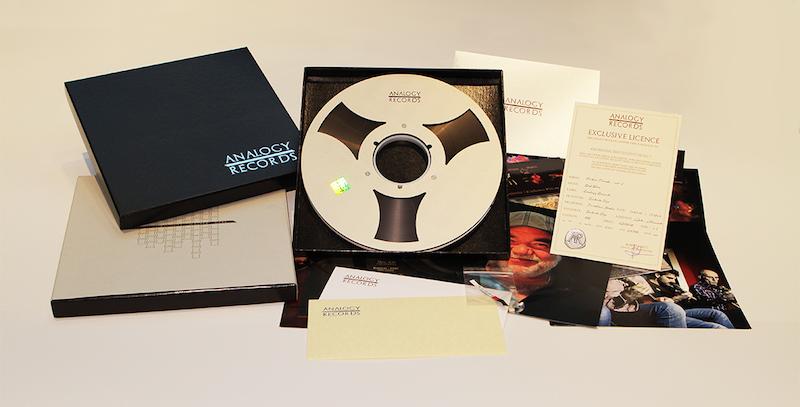 After great care with the recording Analogy Records produce two versions of the albums for the listener, "Basic" and "Premium". The basic version is delivered on 7inch plastic spools using SM468 tape, NAB equalisation, 2 or 4 track format and finally 7.5 ips recording speed. With the premium version there are more options all on beautiful 10.5inch metal reels. As well as the two and four track on 1/4inch tape the album is available in 2 track on 1/2inch tape. The tape is either SM468 or SM900, with the recording speeds of 7.5, 15 and 30 ips, plus equalisation of NAB or CCIR, so many choices to suit most users. The tapes are beautifully packaged, especially the premium edition, and both include a booklet on the artist and album that is large enough to read without a magnifying glass, unlike that supplied with CDs. With the premium version you also get an "Exclusive Licence" that lists the album name, artist, label, producer, recording studio and date recorded, plus engineer and serial number. You also get the tape type and batch details. What is useful is a tape care and maintenance card. This is very helpful for tape novices like myself, as some of the tips are not obvious, like storing the tapes vertically like books, and not horizontally.

For those new to reel to reel tapes you may wonder what NAB and CCIR equalisation is? I am not an expert but this is what I understand. When the tapes are recorded, the frequency response is adjusted to improve the signal to noise ratio. In the case of CCIR the high frequencies are recorded at a higher level than NAB, though they are both raised. On play back the oposite frequency response adjustment is applied so the musical balance is maintained. 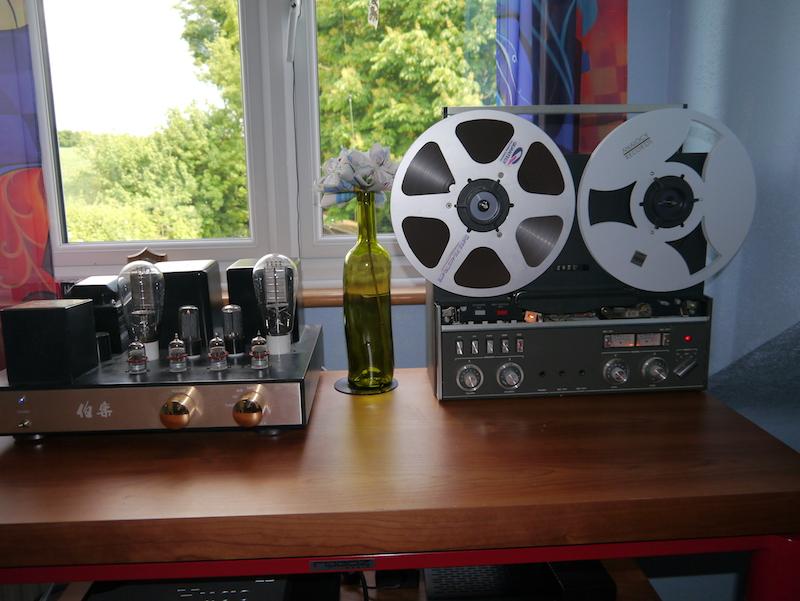 Both versions provide a real pride of ownership and the premium version on their 10.5" reels look fantastic. One aspect of the way both versions of the tapes are produced is they are supplied "tail out", this means before you can play the tapes you must put them on the right hand reel and rewind the tapes. This at first seems rather odd but it done to minimise the copy effect. When reel to reel tapes are stored for any length of time the magnetic signals will try to transfer to the adjacent piece of tape.

Analogy Records kindly supplied a selection of their recordings for review as follows: -

The sampler has tracks from various artists from the Analogy Records catalogue including, Andrea Celeste, Peter Erskine European Trio, Red Wine and others. The sampler also costs €55, so is a significant saving on any of the full albums. 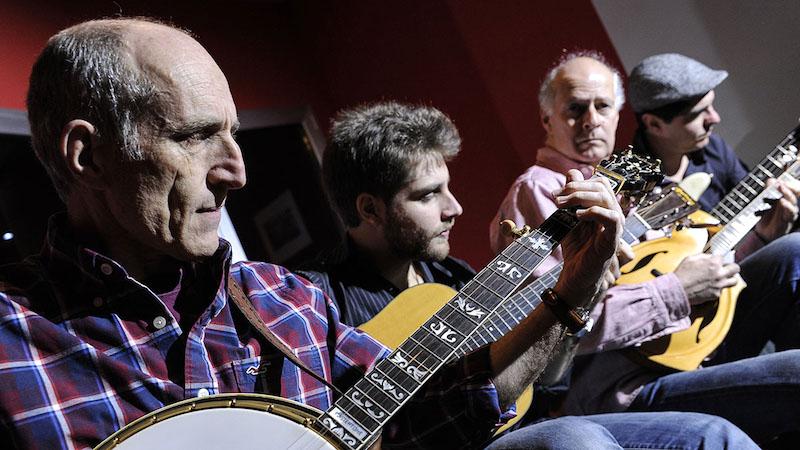 Listening to the Music

Red Wine - "Pickin' Friends Volume 1 & 2
Setting up a reel to reel tape gives a real sense of anticipation and the premium version of the Red Wine albums on the beautiful 10.5" aluminium reel is a delight to setup. The results are worth the effort and wait, the music is delivered in such a smooth and dynamic way, it really is closer to being in the studio than any other recording medium I have ever heard. The sound stage is wide, high and deep with plenty of detail. For me the real plus point of these tapes is how natural the music sounds, there is no artificial edge that you can get on some digital sources. There are also no background noises, clicks or pops, that you get on even the best vinyl. You might ask but what about tape hiss, well in my system I never noticed any tape hiss or feel the need for any of the Dolby process technology we were used to with the old cassette tapes. 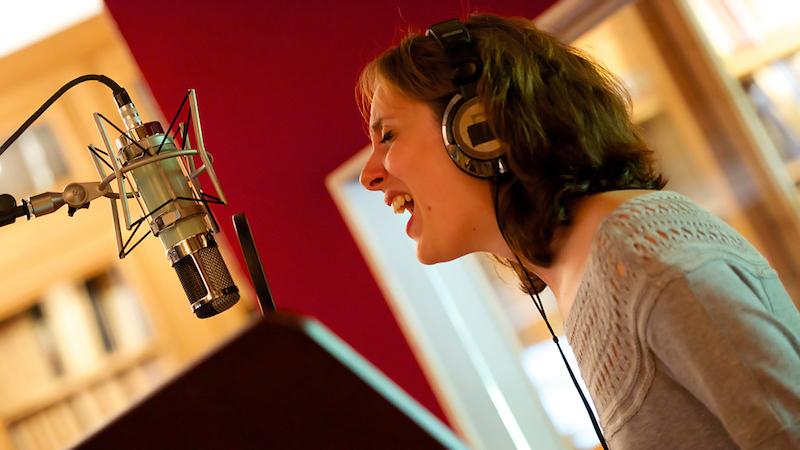 Andrea Celeste in the studio

Andrea Celeste - Something Amazing & Kaleidoscope
Setting up the basic tapes is not such a tactile and pleasurable experience as that with the premium version on the beautiful 10.5" aluminium reels. The plastic reels of the basic version function the same as the metal reels, you just have to content yourself knowing that you have saved yourself a significant amount of money. The resulting sound of the basic tapes is just as good as the premium version, you just have fewer options when purchasing. If those options match your tape deck then you really are not losing out by much, you could even purchase metal reels (€55 from Analogy Records) and transfer the tapes from the plastic reels. Getting back to the music and Andrea Celeste, these two albums are my favourites. This is not taking anything away from Red Wine or the other artists on the sampler, they are all superb, I just love female vocalists. Andrea's voice is beautifully textured and richly toned, it is the musical equivalent of a 12 year old, single malt whisky.

Writing album reviews is not my usual activity as music is such a personal thing. What I like someone else may not. Even so, I would hope most music lovers will like these albums from Andrea Celeste, especially on quarter inch tape. Andrea has such a diverse range of genres from Soul to Gospel, and Jazz to R'n'B, Andrea is hard to resist.

I also have the Andrea Celeste "Enter Eyes" album on CD, it is very good, just not in the same league as these tapes from Analogy Records. Roberto Vigo, the owner of Zerodieci Studio and Analogy Records, has done a superb job mastering these recordings, it is obvious that great care has gone into every aspect of the production. All the instruments are clearly placed and balanced, preserving the dynamics and tonal structure. I do not like recordings that are overly compressed, all these tapes from Analogy Records deliver the largest dynamic range I have ever heard. Putting these recordings on vinyl might be difficult without more compression to avoid the stylus mis-tracking on the peaks.

Various Artists - Sampler Volume 1
If you are not sure about the artists and musical styles, you can listen to some tracks on line via the Analogy Records website. If you are still not sure then the sampler has a very good selection of tracks from the Analogy Records catalogue and is produced to the same high standard as all the other tapes. I particularly enjoyed the Peter Erskine European Trio with the drum solo from "Bulgaria", it is very dynamic and really tests the capability of your system. I am not a fan of tracks labelled "Audiophile Test track" as usually the music is not that intertesting, but that from Peter Erskine is a great piece of jazz music.

If you already own a reel to reel tape machine that is in good order, I strongly recommend these tapes from Analogy Records. If you don't have a working tape machine then get it fixed, or seek one out. There are a few reel to reel tape machines on Ebay, but care is required and a service is essential to ensure it performs to its full capability. Once suitably equipped be warned, you may become addicted to the tapes from Analogy Records and this is an expensive pastime. Putting this into a modern context, a decent DAC and PC streamer with adequate storage for the digital library can cost several thousand pounds. You should be able to pick up a decent A77 or similar pro tape machine for less than £500, although can pay a lot more. If you acquire a significant collection of tapes from Analogy Records you will still pay less than the digital replay system. The sense of pride and tactile pleasure this will provide beats any digital system.

I like all the music provided by Analogy Records and anticipate saving up for some more albums in the future as the sound quality is so good it is hard to resist. Once you set a tape playing, it is hard to move until it has finished, as you are drawn into the musical experience. It seems like time stands still until the performance finishes. With digital replay I find I can get bored, and jump from track to track and artists without finishing an album.