Where the Artist has a voice

Looking at the two 2m x 500mm x 400mm cabinets that hold the 10 shelves of vinyl that have given me so much pleeasure for 40 years I realise that about half of them are there because of something I (or my friends) heard on the BBC John Peel show (or Sounds of the Seventies before that) or things that led from gigs of bands I first heard on Peelie. The other half of this collection came from conversations and recommendations in independent record shops, where people used to hang out on Saturdays, pass comment on new releases, recommend stuff to each other, get played something by a visiting plugger, or have something put aside by staff guessing we'd like it until our next visit and a play through the store's system. The online community is as close as it gets these days, but the automatic 'people who bought this also bought these' message lacks the personal touch or the subsequent conversation.

As usual the major record companies fail to understand their market and miss the boat completely; indeed they stand on the pier shouting after the boat has left that IT'S NOT FAIR and that the boat should be made to stay within their reach, even though they've tied themselves to the pier in some bizarre reactionary bondage excercise whose meaning is known only to each other.
As evidence I cite examples from the days when the major record companies failed to spot that radio play was free advertising and tried to get radio play of recordings banned or paid for.
Example 2, when record companies failed to understand that folk taping records (especially compilation tapes) and passing them among friends was even better free viral advertising and started the ludicrous campaign Home taping is killing music.
Finally after forcing the world to accept only digital recordings by phasing out analogue formats the major record companies are bleating that digital storage is too portable and transmissable and (bleat blub boohoo) consumers at the cash-cow pop end of the market share (without royalties) the digital files the record companies foisted upon us all. QED.

As if this wasn't stupid enough, the major record companies have consistently reduced the quality of their output in terms of sound quality (dynaflex anyone? top 6dB of cd dynamic range anyone? MP3 anyone?) and performance quality; the current rash of reality TV spin-off artists plugged beyond a joke is ample evidence here. QED.

The one hope the major record companies should have is their back catalogue and their rosters of quality artists that solvent 40-somethings, 50-somethings and 60-somethings will pay well to enjoy recordings they missed first time around. Plus new or unreleased material and lavish packaging to make the pleasure of ownership add value beyond the download equivalent. So the major record companies delete these artists and recordings from their rosters because they are not a fast enough buck for their accountants and shareholders.

The 'major' record companies are now just tiny slices of entertainment conglomerates who are more interested in their reality TV shows (hence the reality TV spin-off records accorded such undeserved attention), advertising and occasionally blockbuster movies. Music doesn't feature in their artistically impoverished lives, and as the analytical psychologist James Hillman notes, when we surrround ourselves with low quality our thinking becomes low quality. The major record companies behave like individuals cashing in their pension and life insurance for a good time while the circus is in town and the whorehouse is still open. QED.

But, dear reader, one person's problem is another person's opportunity. Which brings us to Angel Air Records. 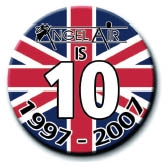 According to their website, Angel Air Records was started in February 1997 by Peter & Shirley Purnell who jumped from the frying pan of a music management company to the fires of launching an independent record label at the suggestion of ex-Gillan member John McCoy. Peter explained it as "a way to put a stop to chasing other record companies for payment of unpaid royalties or licensing product on behalf of our clients."
However, Angel Air Records got their first release out in January 1997, which suited John McCoy as it was his own album Think Hard Again!

With over 250 releases since then, often back catologue of no further interest by the short-term balance sheet fuelled majors, Angle Air Recods have proved there is a healthy demand for high quality music releases packaged well. Their mission? "We are an out and out Heritage Label, and proud of that fact. We work with artists we like, respect and have a natural synergy with."

Those artists range from Bo Diddley to Mott the Hoople via Stackridge! The Angel Air roster looks like a 70's John Peel playlist with an '80's Tommy Vance playlist plus a current Bob Harris playlist. There's new wine from old bottles in the form of new releases from the old masters and mistresses of their craft, together with more recently assembled supergroups of those aforementioned masters and mistresses. If you spent any time in your past dancing and whirling your sweat drenched locks while spreading in gloomy provincial rock venues you will soon hit your credit card limit trying to relive your youth with Angel Air CDs.

"Angel Air Records specialise in rock and pop music from the 60s to the 21st century, both on cd and dvd", they say, but more recently all of angel air's audio catalogue has been made available for downloading from iTunes and selected tracks from the other popular servers.

Less than a decade ago, one of my local record shops (how I wish I could still use that phrase this year), indeed one close to my place of work in Mansfield, Trax Records (specialists in dance music on vinyl but purveyors of pop cds to the masses too) used to lay aside music they thought I'd like. Most of it was distributed by Pinnacle, one of the largest independent music distributors in the UK. Now if you search for Pinnacle on the internet you will get this message:
"David Harry Gilbert and William Matthew Humphries Tait were appointed Joint Administrators of Windsong Holdings Ltd and Pinnacle Entertainment Ltd on 3rd December 2008."

This means, to the unitiated, that Pinnacle are probably no longer trading. Their creditors have appointed administrators to settle their affairs, realise (i.e. sell off to the highest - usually low - bidder) what assets Pinnacle still owns (including stock of records & cds) and pay as much as possible to creditors (taxman first, banks second, suppliers last) after taking the administrator's cut. THIS IS BAD NEWS.

This means that the few surviving independent record shops will struggle to get access to a significant proportion of what could be some of the most profitable music genres. Despite unfounded rumours that Nottinghams legendary Selectadisc was due to be re-openned by a collective of enthusiastic customers, you will be mourning the passing of the old ways. You might be struggling with the brave new world of buying online, thus missing the opportunity of trying to outface the superficially surly record shop counter staff wearing their superior record knowledge on their tour t-shirt sleeve. The competition to outcool each other resulting in apparent rudeness to the point of personality disorder. Ah the joys of face to face record buying.

Or record shop DJ night when mere admission after closing time was a rite of passage, followed by the social pecking order of higher status, the nearer to the counter one's alloted posing spot progressed. Loitering in record shops was an art form, performance art now lost to new generations.

While Angel Air make no special claims to sound quality, they do work from the original master tapes or files, and they do remaster. However, from the examples I have enjoyed, they do so with a light touch. There is no obvious reprocessing; the subtle aesthetics of repeated pcm processes are often intrusive over old analogue masters, ironically especially when those masters are worn or otherwise damaged.

The CD levels are not compressed up to the top few dB of available dynamic range, probably because Angel Air are not competing for radio listeners' ears.

If you have a local record shop, even if it costs a little more than the cheapest internet prices, go in and order stuff from the Angel Air roster. If you love listening to music at home you need a place to go and hear new stuff, to buy the unexpected when you thought you knew what disc you went in for and come out with 7 you didn't expect to buy. And if you're not a music lover, why are you here when you should be out killing things or abusing yourself or whatever activity it is that people who don't love music do to fill their empty lives? So check out the website, go to the shop and buy the stuff.

Failing that buy it direct (as I have to in the absence of easy to get to East Midlands emporia) from the Angel Air Records website. Go on, click on it now and take a look. Without people like Angel Air supplying the music there's no point in those monstrous speakers, superheated valve amps and fancy cables in your listening room. I'm glad someone is still dedicated to supplying me with tunes in a choice of formats with an eye on quality and diversity. I've already bought a bunch of Mott The Hoople I missed because I coudn't afford it as a schoolboy.

Angel Air Records have been trading for 12 years, long may they continue to trade.