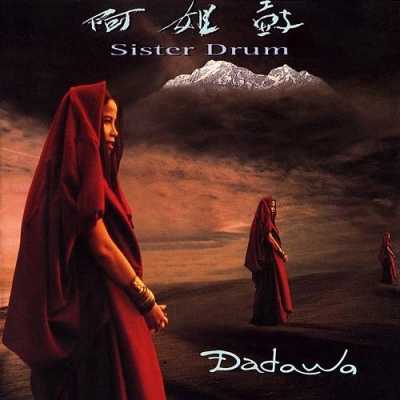 I bought the 'Sister Drum' album by Dadawa in 1996 from the HMV catalogue for no other reason than I liked the look of the cover! Fortunately, I liked it when it arrived, and it has become one of my all-time favourite albums, and one that I constantly use when assessing hi-fi, and writing my TNT reviews.

Like the Paul Horn album that I wrote about, this album is comparatively unknown, and that's a great shame. It is for one thing almost unique, at least I can't think of another album that is quite like it. The artist Dadawa (real name Zhu Zheqin) is Chinese and not widely known outside of her native country, certainly at the time of the albums release in 1995. Dadawa also produces and writes songs. Since 'Sister Drum' she has travelled the world extensively, writing and producing more music that draws much from the places that she has visited.

It was travelling to Tibet that inspired Dadawa to produce the 'Sister Drum' album, and not surprisingly it leans heavily on the spiritiuality of that country. Sometimes compared to Enya, she has instantly recognisable vocals that weave in and out of the songs. Sometimes she is barely whispering, and at other times, belting out her lyrics in competition with either the orchestral backing or the Tibetan drums and chanting. It's the amazing range between the quietest passages on the album, and the full-on crescendos that make it such a big test for an audio system to reproduce well. Make no mistake, on a system not up to the task, this album will probably leave the listener wondering what all the fuss is about - on a good one, it will move them between quiet contemplation and thrilling excitement.

The vocals are all in Chinese which may put off some but I find not understanding them (although there are translations on the Internet) helpful in that I am not distracted from the music and Dadawa's hauntingly beautiful and melodic voice. And the 'foreigness' of the songs simply add to the charm of the album that is both mystical, spiritual and moving. When the Tibetan drums and chanting are thrown into the mix, the atmosphere becomes exciting and quite uplifiting. I would say that once heard it is something that you would never forget. It is also one of those pieces of music that is appreciated more after a few plays, and as I said at the start of this review, it is not something that ever becomes stale.

'World Music' has become so common-place these days that we can easily find other albums featuring Tibetan music and chanting. But please don't write this album off as another New Age CD, it's far more than that. Hard to find these days, and quite expensive as a result, I would still urge any music-loving audiophile to track down a copy of this album, and then find out just how good their hi-fi actually is. A quick search on Amazon shows that there are some used copies available at quite reasonable prices.

Here's a taster, but trust me, until you have heard this on a good system, you won't appreciate what a truly great piece of work it is.