Crash course on downgrading - theory and applications - Part I

How to make your HiFi system worse and live happy 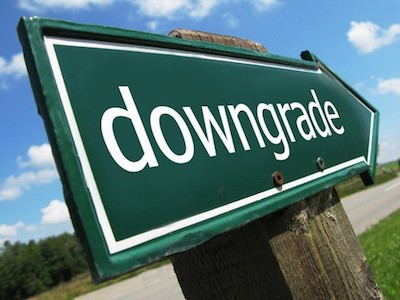 If you're an audiophile (and, if you're reading this, you should be) you are well aware of the sad and frightening implications of the word upgrade or upgrading. Generally, for the man of the street, this word has a positive meaning. For a worker, an upgrade generally represents a step up in his career. In computer science, an upgrade is the new version of an operating system or of a software. Ok, I admit new operating systems tend to be worse than the previous versions ;-) but that's a different story.
In HiFi, upgraditis is a syndrome, a disease that almost immediately causes a severe downgrade of your bank account balance, of your familial relationships and, sometimes, of your chances of satisfactory sex with your relevant second other.

When any audiophile worth his (her?) own weight in silver cables purchases a new component, i.e. performs an “upgrade”, it magically appears - in front of him - the frightening upgrade path. This is the sequence of necessary, mandatory purchases to make the rest of the system adequate to the remarkable abilities of the new component. It is a kind of Santiago path (Camino de Santiago) the wrong way around: instead of finding yourself and your personal Nirvana, you immediately locate your psychotherapist phone number.

Then there exists an even more frightening phenomenon. It is known as sidegrade or sidegrading. It consists of a series of perfectly worthless purchases, i.e. HiFi components that do not perform a real upgrade, just a side shift in sound quality. The sound of your system changes, but not for the better. It just becomes different. This phenomenon helps the audiophile to satisfy his natural need for change, with a completely worthless amount of new components. A team of researchers, psychiatrists and psychologists, at the University of Changeridge, are struggling to find a solution to this problem.

Less known is the so-called downgrading or downgrade path. In other words one purchases worse components (less expensive or just older) with the hope to satisfy his need for change. In this crash course I'll try to explain why this could be highly beneficial (financially and mentally) and how to safely perform a downgrade path and live happy afterwards.

Downgrading: the theory behind

The concept of constant upgrade is basically and intrinsically flawed: it supposes the possibility of the so-called infinite growth. This is known to be impossible. What goes up must go down, eventually. I'm sure your mom (or your urologist) warned you about this basic fact. OK, forget Cialis.

Now, since there's no limit to what can be purchased, your new component becomes obsolete exactly 35 seconds after you opened the box and connected it to your system. More resilient audiophiles will stay happy and satisfied for 50 seconds. A legend tells of an audiophile who remained happy for as long as 24 hours. Then cried.

As a consequence of this basic fact of life, since the number of HiFi components is infinite (every six months a new, upgraded mk_fuck'd version of your new component is issued) it is similarly infinite the amount of cash you have to spend to complete the upgrade path. Consider it as a passage to the limit, but the limit does not exist finite.

From what we have discussed so far, we can formulate a new psycho-physics law, that I will call “first law of audiophile inertia” (Newton-Cadeddu's 1st law). An audiophile will remain at rest (read: unsatisfied) or in uniform unsatisfactory motion unless acted upon by an external force. It may be seen as a statement about inertia, that audiophile will remain in his state unless a force acts to change the status.

Of course, this is just the psychiatric version of Newton's first law (thanks, Isaac)

An object will remain at rest or in uniform motion in a straight line unless acted upon by an external force. .

Hence, the audiophile, who is sad and unsatisfied by nature, tends to remain in his state unless something happens to rescue him. A dramatic change of behavior is needed: the direction of motion has to be inverted! Instead of following the cash flow going out from the audiophile's bank account to the HiFi dealer's one, one should start selling useless HiFi components (we all have those, right?) so to earn some fresh cash. No, stop, you don't have to reinvest this money! Just a negligible part of it! That's the trick! Downgrade, not upgrade!

To be honest, one shouldn't forget the typical audiophile doesn't really want to improve his system, he just wants to purchase new toys. Following Oscar Wilde's famous quote “The difference between the man and the boy is the price of his toy” you should never trust an audiophile when he claims he is about to purchase a definitive component, the one he will never upgrade for the rest of his life. It is quite common to read of audiophiles who have purchased the definitive box (or loudspeaker). Do not trust them! There exists just one definitive box and it is sold at the undertaker's, different sizes and colors available. 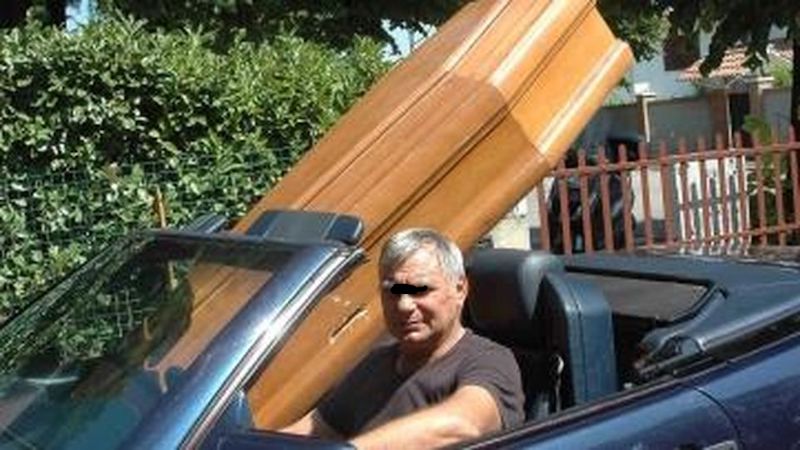 A typical audiophile, clearly satisfied after having purchased his definitive box

Now, since the aim is just that of purchasing toys, the cost should be irrelevant, and one can just purchase inexpensive components. The idea is less crazy than it may seem. First of all, consider that once an audiophile performs an upgrade he easily forgets how the system sound was before the new purchase. It happens, quite frequently, that reinserting the old component in the system, the difference is less dramatic that it seemed. That upgrade path, that seemed a golden Stairway to Heaven becomes less steep than it seemed. The only real growth is the red zone in your bank balance.

Secondly, new, more refined and transparent components can sound perfect at a first listen, but often unbearable in the long run, because they destroy musicality. Everything seems so damn perfect, but even so lifeless and uninvolving. Sometimes, a weaker performing and transparent component communicates music emotion better. And there's also a technical reason for this, as we'll discover.

In the second part of this crash course we'll try to follow this bizarre Highway to hell, instead of trying to climb the audiophile Stairway to Heaven. God bless AC/DC!