Forest of Piano: Does Good Music Grow on Trees?

I never thought that I would see
pianime on my TV.

(With apologies to Joyce Kilmer) 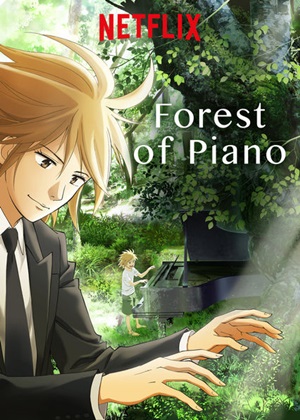 I've written about a Japanese foray into popular musical entertainment before, and here I go again: this time I've found an animated television series centered around, of all things, the trials and tribulations of competitors at the International Chopin Piano Competition in Warsaw, Poland. If you happen to get Netflix, you might like to take a look at this “Netflix Originals” Japanese anime feature, Forest of Piano (in Japanese, Piano no Mori). Like most productions in that genre, it has its, uh, peculiar aspects, but it features enjoyable extracts of Chopin throughout its length, with a little Mozart, Liszt, Rachmaninoff, Dvorak, and maybe one or two others thrown in early on, and those allergic to such things should be aware the characters are drawn and voiced without those big saucer eyes and high-pitched voices usually encountered in anime. I've watched the series twice, once in an English dubbed version and then in the original Japanese with subtitles; the latter is my preference, but either way is satisfying. Besides English, other choices on the US Netflix menu for dub languages are German, Spanish, and French; for subtitles they include Spanish and Chinese. The closing credits also list translators for Italian and Brazil (presumably Portuguese), so if outside the United States check your own country's Netflix menu for options available to you. Vladimir Ashkenazy played the piano for the related movie version; I don't know if he was involved in the series adaptation, but whoever plays is obviously good.

In bare outlines, the story centers around Kai Ichinose, whom we meet in the first episode as he sits down to play at the competition. We promptly go to flashback, lasting for several episodes, in which we learn of his roots as a poor, friendless but self-possessed urchin from the wrong side of the tracks whose primary comfort and outlet in an otherwise oppressive life is a piano he found abandoned in the forest adjacent to his home. A magical element enters as we learn Kai, though entirely untrained and unable even to read music, can coax beautiful, singing sound from the ruined instrument, which is mute under the hands of anyone else. Also in the first episode, we meet Kai's new schoolmate Shuhei Amamiya, the son of a professional pianist and himself aspiring to that career, who will become Kai's part-friend, part-jealous-rival. Where Kai is all free spirit and natural ability, Shuhei is the very embodiment of disciplined application and painstakingly learned skill. Kai gets his “break” when Sosuke Ajino, a teacher at his school and former concert pianist whose brilliant rise was cut short by injury, takes Kai under his wing and guides him to move beyond the magical forest piano and realize his potential, inevitably leading, of course, to Kai and Shuhei's competing against each other, and against several more or less sympathetic secondary characters, in Warsaw.

Let's get the obligatory complaints out of the way up front. The program does leave an impression that its creators have more enthusiasm for than background in classical music, or perhaps that they simply aimed at a lower common audience denominator: everyone consistently refers to all the works being played as “songs” (ugh!); in reality when performing on stage one does not engage in somewhat cringe-inducing inner monologues fretting over how one's rival will receive the performance, whether he or she will remain one's friend, or how “I've found my own piano sound”; and it seriously, er, underplays the difficulties of learning a keyboard instrument.[1] I also have a “long and short” problem with the series: I'll confess at 24 episodes it goes on a bit longer than its material can comfortably support, and I wish the Chopin excerpts were a little less truncated. I'm also sorry to say the animation quality and artwork, impressive at the outset, take a nosedive about two thirds of the way through. By the end, far too much of it comprises repeatedly recycled freeze frames of the audience with little superimposed white fuzzy dots drifting around, presumably to convey the idea that piano magic is happening. Given the handsome look of the show and impressive CGI animation of pianists' hands earlier on, it could and should have done better.

That said, the short length of each episode, only 25 minutes including credits, palliates any excessive length of the series as a whole, and the pacing within episodes is good, with most ending on cliff-hangers that do generate a sense of suspense and desire to continue with the next one. Kudos to the creators, too, for including surtitles identifying each work being played, complete with opus numbers and key signatures, and for accurately depicting authentic piano marques that might well be encountered at a major interntational competition: Steinway, Yamaha, and Shigeru Kawai. Besides, when's the last time you saw a fictional series centered around a major international classical music competition? And I do mean the competition and its performers' struggles and strivings there, not some sappy love story with the competition as window dressing. The plot even addresses the political undercurrents that all too often infect judging at such events. As a story, Forest of Piano remains entertaining throughout, with enough meat to satisfy the adult viewer (or, at least, this one), and the young characters central to it are, within the slightly magic-infused framework, believable, reasonably to well fleshed out, and generally appealing, not those noxious, phoney, too-cute-by-half little TV brats we all know and hate.

I think the series would be a great way to introduce otherwise oblivious kids--or their uninitiated seniors!--to classical piano in general and Chopin in particular. Note that although almost entirely lacking in racy “fan service,” it may not be entirely appropriate for very young ones: the characters' back stories have some “dark” elements, such as the squalid surroundings of Kai's upbringing, another competitor's abusive childhood, and a gratuitous but thankfully brief plot line about some mafioso types going after the abusive surrogate parent for reasons that were never entirely clear to me. On the other hand, the story has some hilarious comic relief, and, notwithstanding its magical elements, an appealing “rags to riches, dedication rewarded” theme and puts classical piano front and center in young people's lives, with nary a hint of the exclusively pop music boosterism universal in programming accessible to kids these days. Moreover, on reflection I'd say the tough aspects aren't much out of line with the sort of stuff that goes on in a mass-market Disney feature. Kids are inevitably exposed to much worse in this Internet age anyhow. So, in sum: Forest of Piano is well worth giving a try if you are susceptible to animated features and have any love of or interest in the world of the classical piano.

___________________
[1] - Note, however, that although Kai Ichinose's ability to pick up even complicated music on one hearing without having seen a score may seem implausible, it is not historically unprecedented: supposedly celebrated Romanian pianist Clara Haskil had much the same facility, perhaps to an even greater degree. According to an article by Peter Feuchtwanger, “At the age of three she could pick out any tune that an older sister played on the piano. She was not yet five when a professor at the Bucharest Academy visited her parent\92s home and played a Mozart sonata. When he finished she repeated the sonata perfectly, while simultaneously transposing it into another key, all without having had any musical instruction.”