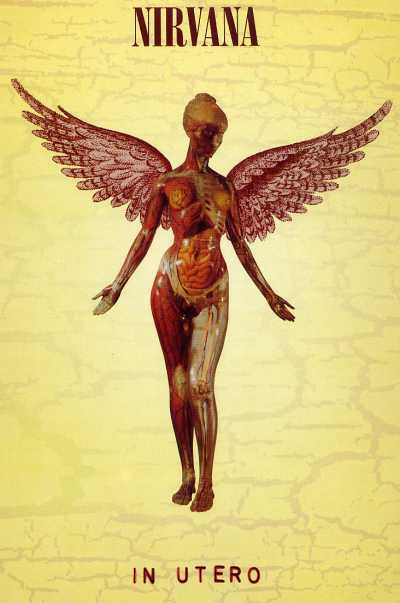 Nirvana, arguably the greatest rock band in the 1990's exploded onto the world scene with their Album "Nevermind' in 1991. "In Utero' followed two years later, the band had toured incessantly and was feared to be on the road to self destruction on heroin and other excess. To this must be added the extra burden of producing the second album always a tricky part of any bands career.

With a change of producer to Steve Albini the result was hated by Geffen. The swirling brilliant wall of sound of "Nevermind" was replaced by a darker heavier mix, and yet the result in some ways is a better recording. Unlike "Nevermind" many of the lyrics are intelligible without which such gems as "I wish I could eat your cancer" from "Heart Shaped Box", one of the bands many high points, would be lost.
This theme of sickness and disease (Cobain was in ill health) pervades the album adding to a feeling of despair. "Scentless apprentice" begins with a McCartney'esque guitar then crashes into a drum led thrash where Cobains voice tears itself to shreds screaming "go away". On "Nevermind" this technique was used very sparingly, here it's overdone, you tend to know what's coming. The same technique (for want of a better word) surfaces on "Milk It". I can live with this, for others it may drive them from the album. That would be a shame because with a couple of exceptions this matches the standard set in the previous album. The stunning close mikes performance on the acoustic part of "Rape Me', Cobain in your room, the crazy self pitying lyrics of "Pennyroyal Tea" I want warm milk and laxatives, Cherry flavoured anti-acid, the almost bouncy "Very Ape" confirm the genius that was Nirvana.

A year later Cobain was dead and Nirvana no more. The two studio albums a tantalising taste of what might have been. Yet I wonder what would have come. After a few listens a nagging doubt began. Though brilliant, there was the hint of a formula appearing. Time and time again we have the pattern of Cobain beginning a gentle (by "Nirvana" standards) ballad to be split asunder by the heaviest screaming grunge. True, within this pattern was a startling variety, but was this the beginnings of a running out of ideas or consolidation before the next assault on the music world? Sadly we'll never know, as it is we are left with two great albums out of two, most big name bands never even manage one.