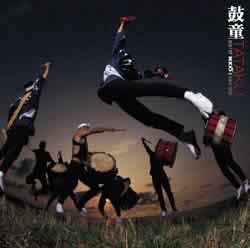 Back in February, I was taking a look at the upcoming schedule at our local symphony hall to see if there was anything interesting. Low and behold, the KODO Drummers were coming to town. I've always wanted to see this group perform. So the next day I bought tickets for the family (first row mezzanine BTW) and I patiently waited until the day of the concert.

Let me say, it was well worth the wait. This was just a fabulous experience. Everybody thoroughly enjoyed it. At times all seventeen performers were on stage either playing traditional Japanese instruments or performing delicate dances to the music.

Doing a little research on the KODO Drummers I found out a couple of fascinating things. Each of these musicians serve a two year apprenticeship in the communal KODO Village on the Island of Sado in Japan. While there, they are taught the ways of the traditional Japanese taiko drums, dance and art.

It's coincidental, but the only performer in the group who wasn't born in Japan is from my hometown, St. Louis. Kaoru Watanabe, who's parents are from Japan, was just appointed as a full time member of this exclusive group. He just finished his apprenticeship and was promoted to a full time performer. That is quite an honor knowing the heritage of this group and art form.

As I'm sure you are aware, this is music is centered around the taiko drums. Accompanying the taiko drums on Tataku are a host of traditional Japanese instruments, the Shinobue bamboo flute, Tebira hand cymbols, Morin Khurr horse fiddle to mention just a few. This music is steeped in culture. It conjures images of ancient Japanese people and beauty that abounds in the countryside's and small villages.

For the most part the music on Tataku is very rhythmic, fast and energetic. If you've not seen these performers in person or on video you can only imagine how physically demanding this art form is. They play without the assistance of a microphones and amplifiers. To fill a concert hall with sound (which BTW was close to 110db at times) they literally use their entire body to play the daiko's. It's very impressive to watch and listen.

Although the music is ancient in nature, KODO has created modern arrangements for these timeless pieces. The recording quality of this CD is absolutely impeccable. It's as close to what the instruments truly sounded like as I've heard, drums included.

Speaking of the drums, this CD can really put your speakers and amps to the test. It has huge dynamic swings. You will also be able to see just how much control (damping factor) you have over your woofers. The bass produced from the larger daiko drums is just fantastic. Those coupled with the smaller drums, hand cymbals and bamboo flutes will give your system a real workout.

Overall there is a very open feel to the recording. The realism is stunning. Listening, the engineers allowed the sustain of the notes to linger without prematurely cutting them off. This is a good thing. It makes this recording that much more convincing. The engineers at Sony's Shinano-machi studio have done a great job of mastering this CD.

The music on this CD is quite different from that which you are used to listening to, but it's very involving and enjoyable. If you are fond of music from cultures that differ from yours, you will definitely savor this release.

If you have found yourself listening to a single style of music, open your mind's eye, take in the rich culture in music that surrounds you everywhere, no matter what it's form. You won't regret it.

KODO tours the world every year. If you are at all able, go see them. The performance is visually and aurally stunning.

Here's a link to the KODO website if you want to learn more about the performers, the culture or check their touring schedule. Believe it or not, you (if you have enough money) can attend a workshop at the KODO village. And if you are really dedicated, you can apply to be an apprentice. Who knows, maybe you could be in the next generation that performs for us.