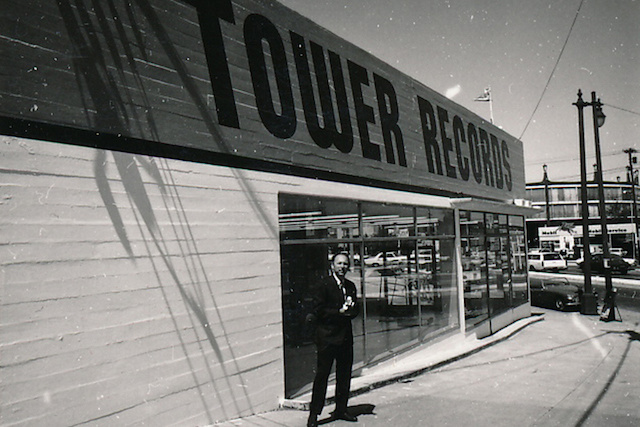 Back in the mid-1980s, I began graduate studies at George Washington University, which is in a Washington, DC neighborhood with the amusing name "Foggy Bottom." I was a so-called "teaching fellow", meaning I ran a class for the university in return for a modest stipend. Almost on my first day there I discovered a huge store three blocks away. It was called "Tower Records" and--well, if I were to follow my usual instincts and insert a cliche, I'd say "the rest was history," but what would be more accurate would be "my stipend was history."

On my first visit, I went upstairs to the classical room and was amazed--not only was this a store with a separate room for the classical records, playing classical music on the speaker system instead of the customary latest rock hits, but that classical room was bigger alone than most other record stores I'd visited. Not only that, but its stock--my Lord, the stock! Imported labels I'd never heard of, seemingly everything in release from the domestic labels, music I'd been seeking for years (remember, this was before Internet reatiling), exotic music and hi fi magazines, all organized in a way that actually made sense to the classical collector rather than according to how some clueless metalhead kid thought it should go. I thought I'd died and gone to heaven. And naturally I found something right off the bat that I couldn't live without, a couple of volumes of Bach organ music from the complete cycle by Michel Chapuis, on, uh, oh dear, full-priced Auvidis Valois CDs reissued from the original Telefunken LPs, sticker price $18 and change apiece.
The clerk--knowledgeable clerks!--assured me the entire series, which I'd been wanting forever, would be coming out in periodic releases over the next few months. Well, who needs lunch, anyhow? Needless to say, I bought those discs, and I bought their successors, and if I'd bought those lunches I'd have been carrying around just that much excess body weight for the past 30-odd years instead of enjoying Bach for a like period.

In the 20 years that followed my life changed in many big ways: I got my degree, I got a real job, I got married, I got a house, I got Internet access, eventually I got a daughter. What did not change was that Tower Records was a big part of my life, even more so as I discovered a satellite store in Rockville and another in the Northern Virginia suburbs. A trip to Tower was always an adventure, something to be anticipated with excitement. At its peak during that period, the Foggy Bottom store even ran annual "classical music weekend" events, with every classical CD on sale and major name artists, like Christopher Hogwood, on hand to sign records and talk with patrons. Then, in the early 2000s, the dream came to an end.

Tower was built on the idea that its stock would be wider than anyone else's, and that was a big part of the fun: finding things that you'd never see anywhere else. With the advent of serious online shopping, however, fairly quickly the world became one big record store, and the prices were better than what any rent- and tax-paying brick and mortar store could charge.

Tower, imperceptibly at first, went into decline; in 2004 it went into and then emerged from bankruptcy, and then it went into bankruptcy again in 2006, not to open again. It took me a while to notice the decay, as by then I had largely stopped buying CDs to concentrate on 78s and cylinders, my thought being "CDs will always be here, but the old records will stop being available any time now." So much for my powers of fortune telling! I still remember the day Tower's final bankruptcy clearance sale began; knowing it was the last time to see anything like the store I had loved so well for so long, I hastened downtown and bought up as many exotic CDs, DVDs, and magazines as I could afford. The CDs were mostly piano music, with artists including Rudolf Serkin, Antoine Rebstein (a young Swiss who was playing left hand music; I've heard nothing of him since), Earl Wild, Rudolf Firkusny, Shura Cherkassky...the list goes on and on.

Last Sunday, Russell Malcolm "Russ" Solomon, the marketing genius who founded Tower Records, died at age 92. I'm not going to deliver an elaborate obituary (see interview below) beyond noting that his was the quintessential "rags to riches" American success story; starting out selling used jukebox records in his father's pharmacy, through a gift for retailing he built a record store empire that would set the standard in the United States until technological change destroyed the world that gave rise to it.

Think of this article, then, as a tip of the hat not only to someone who gave me many hours of pleasure--and relieved me of many hours' worth of salary!--during two key decades of my life, but to a way of life now passed that I enjoyed living. If I have become accustomed to the greater variety and lower prices available to the Internet shopper, to the ability to find almost anything with a few mouse clicks at any hour without stirring from my desk chair, I still miss the joy and eager anticipation of walking into a big space devoted just to the music I love and going on a hunt knowing not what quarry I was seeking, let alone knowing where I would find it.
Thank you, Mr. Solomon, and may you rest in peace.