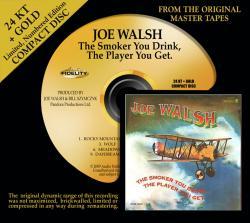 The Smoker You Drink The Player You Get

The Rocky Mountain Way is paved with gold

No smoke without fire

The second solo album from James Gang stalwart Joe Walsh and his band Barnstorm, who're inexplicably unnamed on the album sleeve. The title refers (probably reefers too) to Joe's ability to plug in and play even when completely bombed. He is supposed to have used this phrase to describe his ability to play when out of it. Stories abound about him wandering blearily into studios barely able to speak, and certainly unable to spleak cohplerently, but once connected to his guitar would play as though sober. He'd finish the take and his voice would return to incoherent mumbling as though the playing part of his brain had switched off again. Neuroscience research shows that memory is state dependent, but also that most of us play worse when we drink but believe we play better because our prefrontal cortex (the superego bit that includes self-criticism) gets shut down by alcohol (and possibly THC). Engineers report Joe would come in, switch on the musician part of his brain, play, switch off and go, having played amazing guitar parts during an interval of lucidity. Walsh has since received treatment in New Zealand in 2004 and now teaches about the dangers of substance abuse, so don't do this at home kids.

One of a clutch of albums Walsh released between his memberships of The James Gang and The Eagles, The Smoker You Drink The Player You Get opens with the spectacular and familiar Rocky Mountain Way but the album is so much more diverse. There's jazz figures, a calypso outing, a track so prescient of Pink Floyd's The Wall that it must have been unconsciously referenced, a ballad...you understand.

The diversity of styles may have been helped by being co-written by the band, multi-instrumentalist Joe Vitale (principally drummer, contradicting all the rock drummer jokes), bassist Kenny Passarelli, and keyboardist Rocke Grace who was new to Barnstorm on this album. Their diverse influences and styles make this album stand out. Barnstorm disbanded after this masterpiece. Being competent on electric bass, piano, woodwind, harmonica and bagpipes (!) Joe Walsh could have gone on to record entire albums solo in the multitrack studios of the 70s. This album demonstrates the creative interplay that explains Joe's desire to collaborate, the sum of their creative parts far exceeded by the whole album. Joe Walsh continues to record and his most recent outing suits the Old Scribe spectacularly, entitled analogue Man

"Surely every potential purchaser already knows the material?" insist plebs chorus, stage left, "So how does the sound compare to the original?"

The HDCD, by Joe Walsh, from Audio Fidelity was originally released on New York label, ABC, on their Dunhill imprint, not to be confused with the British supplier of high class smoking requisites to the Royal Household, but how appropriate for this album's title! ABC are more familiar to soul collectors and jazz afficionadoes. There was a QS Quadraphonic version of this LP originally using Sansui's QS system, not to be confused with the similarly matrixed SQ Quad system, so an HDCD continues a pattern of format diversification for this album. HDCD is what CD should have been from day 1, and unlike SACD or DVD-A, HDCD is not actually a different format on a similar looking disc. Hence HDCD does not demand a dual layer to be back compatible with CD, it merely offers adequate data resolution for 2 channel audio. All other things being equal, HDCD has fewer audible shortcomings than CD. However, not everyone has a HDCD capable player so this HDCD has been auditioned for this review as CD and HDCD.

As a HDCD transfer this is absolutely stunning, better than your old scribe remembers of a European pressing of the LP back in the day. The CD is almost as stunning, as good as red book CD can get. Previously unheard nuances of expressive playing become audible and micro dynamics are more explicit. 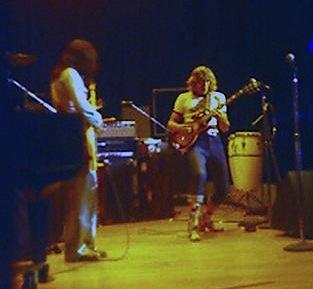 TNT-audio have already raved about the quality of the AudioFidelity transfers and this is the best so far. Helped along by the extra bit depth of HDCD, the dynamic range of The Smoker You Drink The Player You Get demonstrates that rock music does have dynamic range. Eagles fans, Joe Walsh completists and those whose old vinyl discs have been played to death must buy this HDCD. Anyone who loves guitar rock ought to have this in their collection, whether they're blues driven, metal driven or indie driven. This is one of those seminal albums with great sound quality too.

Classic albums and recorded performances we missed are the real justification for the insane amounts we spend on our audio systems. Neuroscience evidence demonstrates that our mental health is improved everytime we rediscover a loved tune or hear a new one we like for the first time. So that justifies all that audio gear then, it's good for our health.

Years of excess may have left his speech slurred, but just don't seem to have wrecked the guitar part of Joe's cerebral cortex!