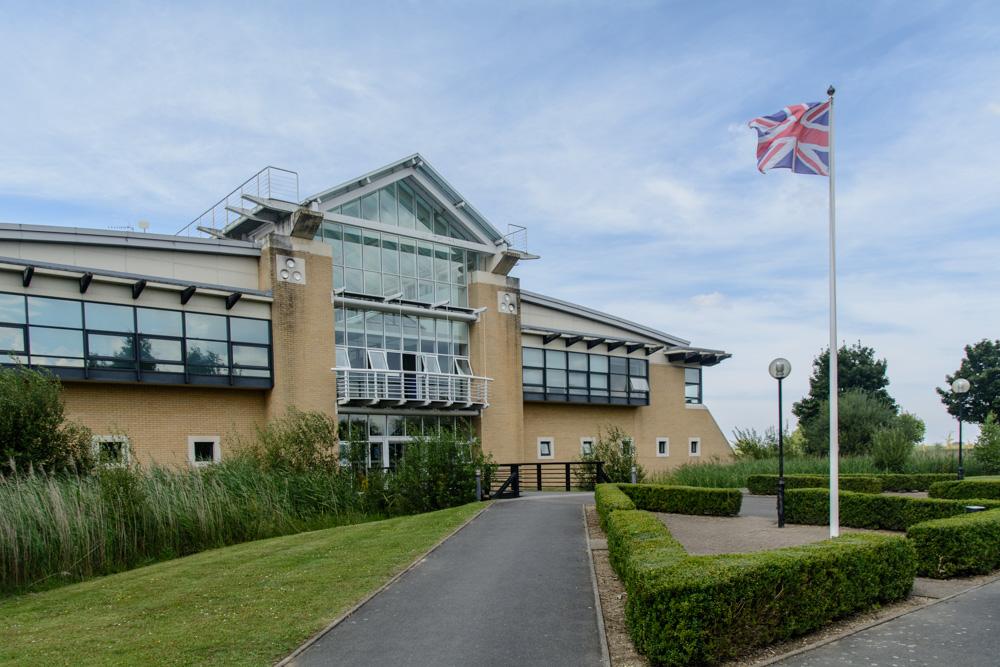 Getting out of the way of the music?

In July Andy Norman and I were invited to visit ARCAM who are situated just north of Cambridge in the village of Waterbeach. The company was founded in 1976 by two university students as Amplification & Recording Cambridge (A&R Cambridge). Their early work was building high performance mixing desks for recording studios. 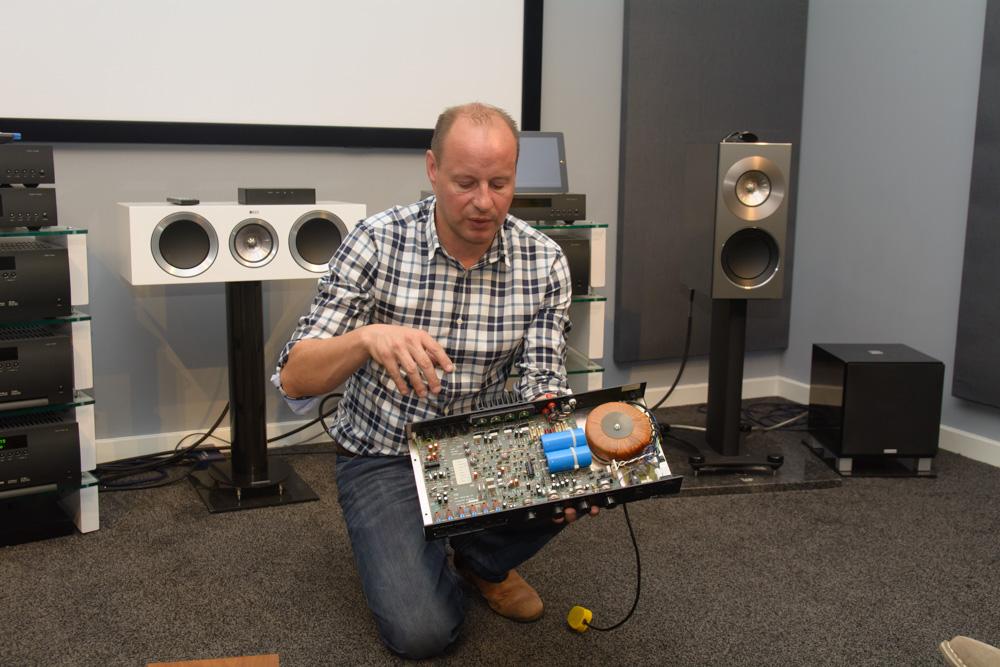 Andy Moore with the Legendary A&R A60

It did not take long before their passion for music reproduction took over giving birth to the legendary A&R A60. After the A60 amplifier came the T21 tuner and the company continued to grow. In the early 80s CD came along and in 1988 ARCAM were the first company to attempt to improve digital sound with an off-board DAC. ARCAM continued ploughing their own furrow in the audio world building their own Dolby S cassette deck in the UK. In 1999 they were an early adopter of DAB when they built a high quality DAB tuner.

About 10 years ago there was a management buy out that allowed John Dawson, one of the founders, to return to his passion leading the design effort at ARCAM. 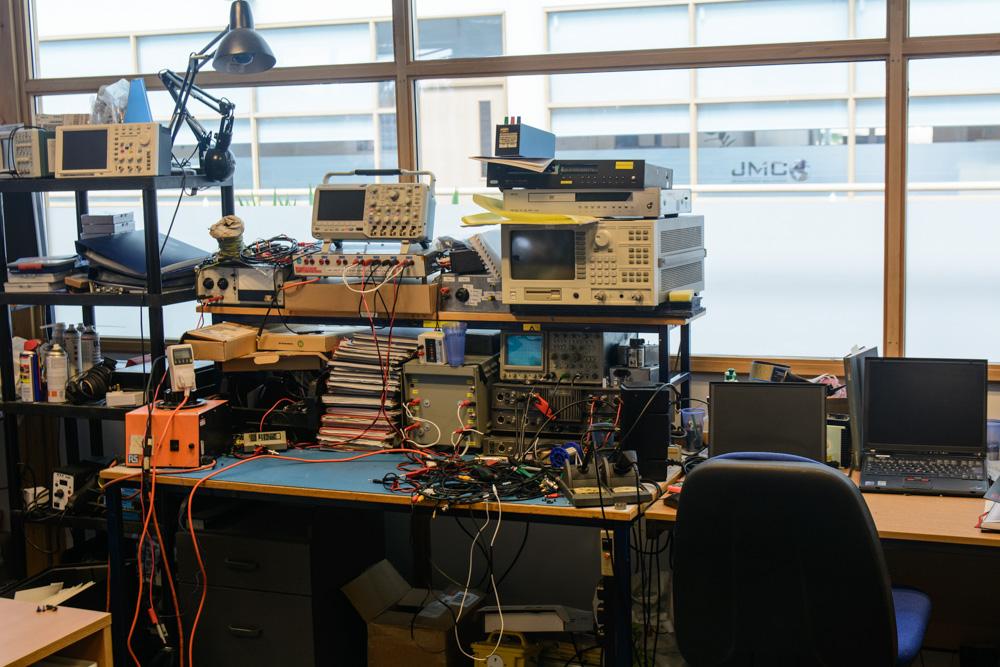 The picture above shows John Dawson's work station, unfortunately he was not available during our visit. 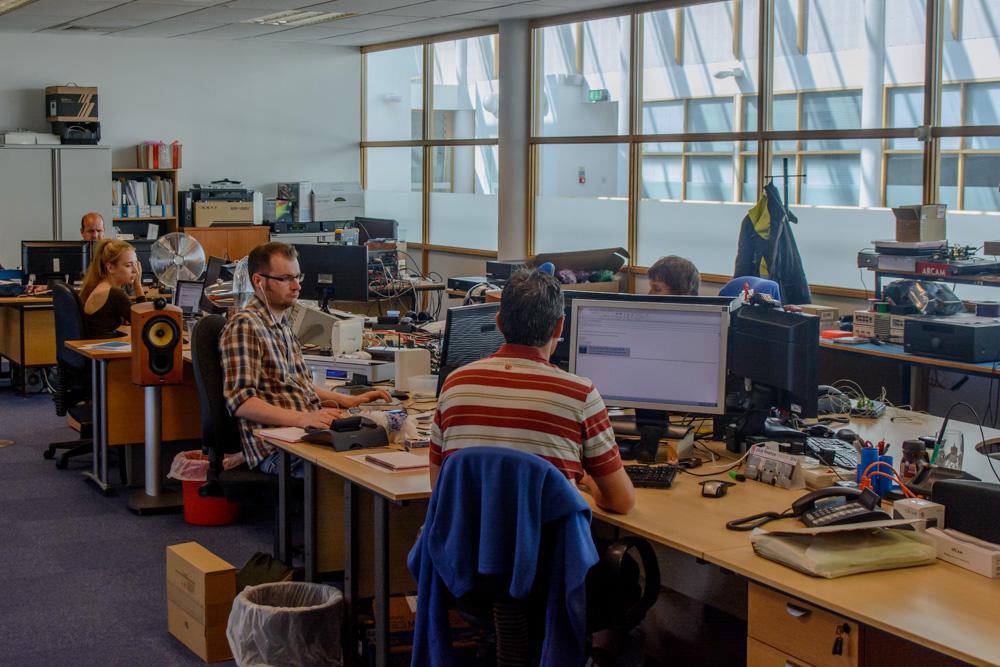 The engineering team hard at work.

These days ARMCAM is split 50/50 between classic two channel audio and audio visual system, though at heart they are still a 2 channel audio company. Today ARCAM are based in and ex army building near Waterbeach. Their demo was room originally a safe, you can even see the dial lock on the door! An interesting feature of the demo room was the use of acoustic traps placed in the corners and primary refection points on the side walls. These acoustic traps were made by Arcam and are constructed of a plywood back with wood sides and filled with thermal insulation material (recycled paper). The acoustic traps are then covered in a material to match the room decor, simple and effective. You can see some of the traps behind the Kef speakers in the demo room picture. 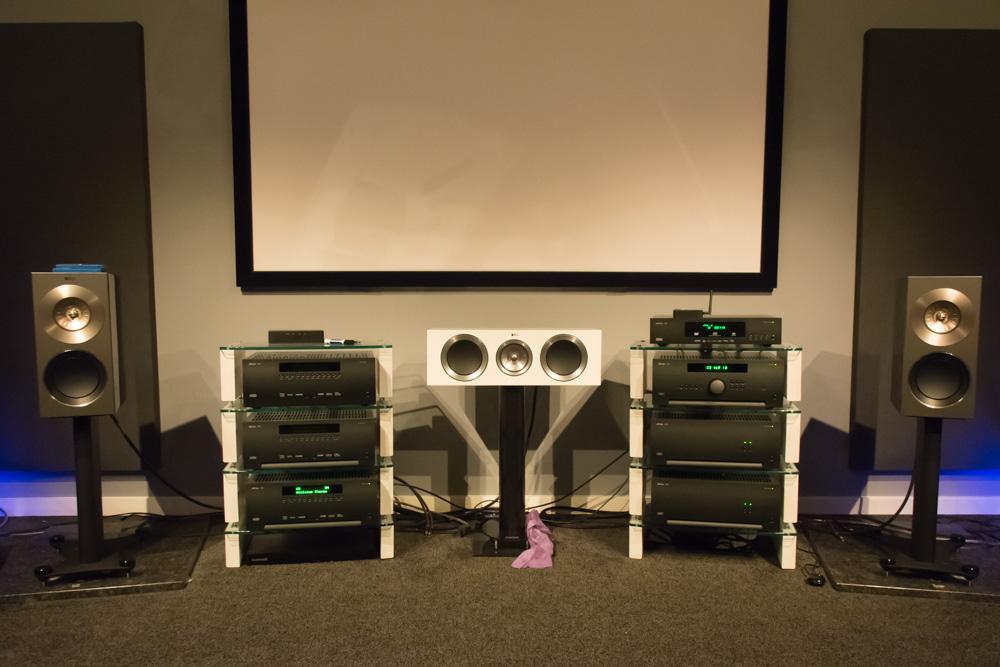 As well as designing cost effective products for the consumer AV and two channel markets occasionally John Dawson and the design team are let lose to design something with no limitations. With the no limits brief the D33 DAC was born. This highly featured DAC uses a DICE integrated circuit with JETPLL technology to deliver leading edge <5psec levels of jitter. Judging by the numerous reviews online ARCAM seemed to have succeeded in delivering a state of the art product with features like adjustable filters that allow the user to tune the sound to their preference.

Another no-holds bared design is the C49 pre-amp and P49 power amplifier using Arcam's propriety Class G design to deliver up to 200 watts per channel. Our starting point for the demonstration was the A19 amplifier fed from a miniBlink with mp3 files sent from a mobile phone. The sound was a little compressed and rough round the edges, but pretty good considering the source. The rest of the demo room session was spent working our way up the 2 channel product range. The speakers were the latest Kef reference standmounts. There were even some new and still secret products which made for a very interesting listening session. The final setup was the C49 pre-amp with dual P49 in bridge mode delivering unbelievable amounts of power. Each step up on the quality ladder was clear to hear, the sound gaining in refinement and detail. The final step to the C49/P49 combination was to my ears the icing on the cake, the Kef speakers appearing to vanish. The sound was effortless and very dynamic, a lifelike scale of music.

Andy Norman and I had a splendid afternoon being entertained by Andy Moore with many interesting things to hear and a fascinating conversation. Thanks Andy, we hope to see you again sometime soon.