Lions and Tigers and--Mares! Oh, My!

Collectors of old records quickly get used to encountering long-defunct but once pervasive cultural references: the zoot suit (with the reet pleat), the rumble seat, central telephone exchanges, all manner of racial and ethnic stereotypes best forgotten, Prohibition, Silent Cal, Andy Gump (the well-known chinless wonder) and Barney Google (with the goo-goo-googley eyes), the turkey trot and Charleston and fox trot and one step and Lindy hop, flappers, and Kaiser Bill, just to name a few at random. In that way, records are little time capsules, taking us back to experience what our forebears thought, what made them laugh and cry, how they enjoyed spending their time, the routine--and extraordinary, and sometimes terrifying--concerns that filled their days. They also teach us that some things, if outwardly clad in zoot suits, at heart are seemingly eternal: How can I connect with that girl? Or that boy? How can I bear the loss of that girl? Or that boy? Now that I have made that boy my own, how do I handle the reality that Prince Charming guzzles beer, burps loudly, flirts shamelessly with other princesses, and sticks me with all the cooking and cleaning while he hangs out with the guys? Now that I have made that girl my own, how am I going to deal with her nagging and pay for all her shopping sprees and still make ends meet? How will I make do while my country is at war? or if I'm called to fight? How do I handle the death of someone dear to me? And, of course, that eternal conundrum, how do I deal with a world that is changing in ways I don't like?

We today are more accustomed to that last one than any generation in history, although if you think about it our conditioning started to pick up steam with the eruption of World War I. Still, even for those of us who dwell on such matters, it's a bit unusual to watch a cultural icon, celebrated in music and story and film, abruptly pass straight into history--a "how can I connect with that girl" turning into "twenty-three skidoo" right before our eyes. I had just such an experience a few weeks ago, and if you'll forgive me something of a digression into a subject whose relation to music is a bit tangential, I'd like to spend a few minutes reflecting on it.

TNT's US readers likely already know, but for the benefit of those in other countries, the Ringling Bros. and Barnum & Bailey Combined Shows circus, "The Greatest Show on Earth," after 140-odd years of entertaining generations of Americans, permanently folded up its Bigtop a little earlier this year. A few other, smaller circus troupes are still active in the United States, but ever since its creation through the merger of several smaller shows Ringling Brothers has always been the organization that immediately sprang to mind in this country when someone said the word "circus." As luck would have it, I learned of its impending demise about a month before one of the two traveling farewell shows was to pass through our area, and my wife and I, realizing this would be the last chance for our 12-year-old daughter to see the circus, hastened to rearrange her usual battery of ice skating lessons and buy tickets.

I was curious how the circus would have changed from when I'd last seen it, back in the 1960s, when my own parents took me at an age a bit younger than my daughter's. My initial impression was that it had become unrecognizable: a science fiction theme, of all things, and actors on ice skates, and lots astonishing special effects that would have been unthinkable in my childhood days.

And yet, peel back that veneer of modernity, and in the ways that count it was still the same old circus of my youth. Underneath the flashy new paint, the circus rings were still assembled from the same curved segments that I remembered from decades earlier. More importantly, that science fiction theme proved to be like the plot line of a '40s musical film: a thin pretext under which to present a succession of (mostly!) the traditional acts. You still had the lion and tiger trainer; the high wire acrobats and trapeze artists; the daredevil bareback horse riders; and of course the wacky clowns doing pratfalls and packing themselves into a little car, even if it was made up to look like a rather battered home-built rocket ship. And much to my delight, my daughter showed that, despite video games and file streaming and all the other eye-popping electronic distractions that compete for their jaded attention today, kids are still kids: she was laughing and cheering and having a grand time of it. Just like her (for the duration, maybe-not-quite-so-) old man.

What of the music? Well, it came through just fine, provided by a live band tucked away almost out of sight on a balcony in the scenery backdrop. Nothing that I found memorable, to be honest, but nonetheless live music, played by and accompanying live performers in a show designed to captivate and delight, just as it always has been. The sound system, too, was very good for an arena environment; it conveyed music and (mostly dispensible) dialogue with equal aplomb. And, although it did not put in an appearance in this particular show, that brings me to just one of those "cultural icon" aspects: that catchy march that, at least in the United States, instantly cries "circus" to anyone who hears it. 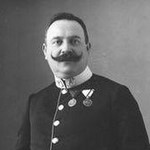 What isn't as well known is that it's called "The Entry of the Gladiators," and its composer was a Czech instrumentalist, bandmaster, and music publisher named Julius Fucik. He lived from 1872-1916 and wrote some 400 marches, polkas, and waltzes, mostly for military band; consequently, according to Wikipedia, he is sometimes called "the Bohemian Sousa." He wrote "The Entry of the Gladiators" in 1897 and titled it in keeping with his interest in Roman history; it's best known, however, in a 1910 arrangement by Canadian composer Louis-Phillipe Laurendeau for small band, published as "Thunder and Blazes." In that guise, it became what is known in circus parlance as a "screamer," a fast, exciting band tune played to stir up the audience and accompany the full-tilt entrance of the lady bareback riders in their flamboyant (but skimpy, to the delight of the guys in the audience--another of those things that never change!) costumes. Later, it came to be more associated with the antics of the clowns.

Care for a souvenir of what was a vibrant thread in the social fabric but now will become a fading memory? I can think of none better than the Mercury Living Presence recording by Frederick Fennell and the Eastman Wind Ensemble called "Screamers," originally on LP, of course, but also issued on CD and SACD coupled with another early LP era album by the same forces, "March Time." Fucik's masterpiece is there, together with more than two dozen other rousing examples of this relentlessly fast, loud genre in flawless performances that belie the technical difficulties these crowd-rousers pose to the musicians tasked with playing them. That said, I'd be inclined to sample a few at a time rather than playing the record (or disc) through from one end to the other; these pieces are musical exclamation marks, and too many exclamation marks in row can get fatiguing! Just too much for a sitting! Even when each one by itself is stellar! As I guess you can see! Ahem! If you do want a copy, you may want to move quickly; a hasty tour of a few online sellers suggests it may have slipped out of print.