Part I, in Which We Learn that Everything Old is New Again

Hello, class, and welcome back from Summer Break. Today we'll start with a little history lesson. "Oh, no, the windbag's going to trespass on the Old Scribe's ancient Greeks again," I hear someone mumble. OK, a demerit for you! No, this time I'm eschewing ancient history in favor of something a little more recent: the early days of the (formerly) beloved Compact Disc. "CDs? In a vintage column?!? You're kidding, right?" Not a bit of it! Stop and think a minute. The first CD players hit the market 37 years ago. When I started collecting 78s in the early 1970s--“Oh, so it is ancient history.” That does it! You're staying for an extra study hall after class! Now, to continue, at that time, most of what I was buying as “antique records,”--any from the middle 1930s on--were not yet 37 years old. I can assure you anyone collecting them then was viewed as being into “vintage” stuff, definitely not “hip.” What's more, if you talk to anyone under the age of Boomer, you'll find that today physical CDs are about as hot and happ'nin' as--well, as a Chinese COBY knockoff of the Discman.

Regular readers of this column will be accustomed to discussions of special problems presented by early analogue disks and how to solve them. Today, we turn our attention to a special problem presented by early digital discs, and next time we'll look at how to solve it, particularly for those of us who like to save our music to computer “servers.”

Oh, and we'll touch on some vintage computer skills while we're at this. “Teacher? May I take a bathroom break?” No! 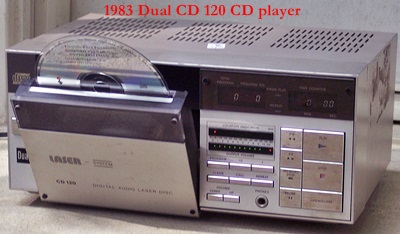 Famously, at its introduction the CD was put forward as offering “perfect sound forever.” Needless to say, that hyperbolic promise proved empty: “forever” soon fell afoul of such unwelcome developments as bronzing, and “perfect sound” foundered on the inconvenient reality that if it's perfect, you can't sell people (probably meaningless) “improvements.” Worse, like just about every medium since the wax cylinder, playback technology lagged recording technology, and the early digital-to-analogue converters in those first generation CD players (like the one at right) were actually noisy beasts, visiting high frequency artifacts on every signal passed through them. For an expensive new format whose major selling points included its supposed freedom from any hint of surface noise, that characteristic was clearly unacceptable. But what to do about it?

Here's the innovative solution the industry cooked up: when mastering a CD, boost the treble, then cut it, and with it the D-A converter high frequency noise, by a like amount in playback. “But wait,” I hear someone muse, “Isn't that just the same thing the RIAA curve did to music on those supposedly obsolete LPs the CD was to replace?” Well done! I'm awarding you bonus points and an A+ for the assignment! Although, to be precise, you don't have it quite right: it's half what the RIAA curve did and does. LPs incorporate a boost/cut routine for treble, to suppress surface noise, and a cut/boost routine for bass, to reduce groove excursions at low frequencies and hence increase playing time. Not having physical grooves, CDs didn't need the latter treatment (and still don't); only the high frequencies called for noise-masking subterfuge. Accordingly, treble boost/cut, or “pre-emphasis,” was written into the Redbook standard, and every CD player bearing that snazzy “Compact Disc Digital Audio” logo should be entirely compatible.

OK, we've now pulled back the curtain on pre-emphasis, but that's not the end of the story. In fact, the Redbook standard provided pre-emphasis was optional, and only some CD producers chose to apply it; players would trigger their (analogue--a point that will prove important later) de-emphasis filters only if detecting a flag in a disc's table of contents or certain indicators in the disc's subcode. Computer technology being what it is--and, let's face it, a CD player at heart is just a specialized computer system for reading and interpreting data stored on an optical disc--the quality of digital-to-analogue converters quickly improved, and within a few years pre-emphasis was deemed unnecessary and largely, albeit not quite entirely, omitted in new issue CDs.

Why, then, do we care? Well, because pre-emphasis is present in a fair number of significant early issue CDs--not only by the classical artists I collect but also by popular icons like Miles Davis, Bruce Springsteen, Billy Joel, the Beatles (Abbey Road black triangle pressing), and Pink Floyd (including at least one issue of Dark Side of the Moon and The Wall), to name a few--and without compensation gives music the very embodiment of that shrillness of which analogue acolytes always accuse anything with the word “digital” in its title. Because pre-emphasis is optional and has been infrequently implemented for a good quarter century or more, however, it's not high on manufacturers' list of design concerns. Hence, if you have one of those “vintage” CDs just discussed, uncompensated playback can happen more easily than you might think: notwithstanding de-emphasis capability's being part of the Redbook standard, not all CD players, even expensive ones, have implemented it. More to the point, for our purposes, in pre-emphasis our old nemesis Procrustes has found a weapon to counter the strategy I outlined for his defeat a few years ago. “I knew it! He's going into ancient Greek history!” No talking in class, please, or I'll make you stay after school until you've written “Tchebychev anti-aliasing filter” on the chalk board 100 times.

If both of you who read it will forgive a quick recap to benefit those who didn't, my earlier article advocated storing music on computer hard drive as a way of escaping the “bed of Procrustes” problems imposed by the playing length of physical media, be it the inability of 78s to accommodate more than around 4 to 5 minutes' music, and hence to present anything longer without a break in the middle, or the LP's 25 +/- or CD's 80 +/- minutes, forcing couplings for music of shorter duration. Where, say, a symphony might be spread across six or eight 78 RPM record sides, with breaks in the middle of any movements lasting longer than four minutes, a computer copy can be spliced together to make a single continuous performance. At the other end of the spectrum, copy a CD of, say, Scarlatti sonatas to hard drive and break it up into the individual pieces, and you no longer are faced with an artificial "suite" never intended by the composer.

Unless, of course, that Scarlatti CD is by Huguette Dreyfuss on Denon. Then we have a problem. That disc has pre-emphasis.

You see, copying, or “ripping,” CDs with pre-emphasis raises a hidden issue. Remember how I mentioned CD players' de-emphasis filters were and are analogue devices? In that context, they work fine to readjust treble balance. CD-ROM drives in computers, however, are designed with general computer data, not audio, in mind, and they don't, or at least don't necessarily, incorporate analogue audio filters. Moreover, ripping a CD bypasses the drive's analogue audio feed and pipes digital data from the disc directly to the computer via internal connection, USB cable, or what have you, and therefore no de-emphasis filtering ever gets applied during the copy. On playback, computer audio software does not apply de-emphasis, either. Therefore, what you'll hear from a ripped disc with pre-emphasis is that shrill, strident sound we all know and hate. Saving music to the computer in these cases is not a satisfactory escape from the tyranny of physical CDs' temporal dictates. Procrustes flashes a sneering smile.

The good news is that methods do exist to wipe that grin right back off his face. Actually, these techniques will benefit those who continue to play physical CDs, too, if they have players that don't detect and decode pre-emphasis. The bad news is that the fix is akin to a good hoe-down: it requires some fiddling. Having outlined the problem, we'll stop here for recess. Please be back in your seats promptly when the bell rings for next period.