The Fix Is In

In February of last year, as some of you may fondly recall, TNT ran a series of articles in which yr. hmbl. svt. regaled you with various turntable options that have been available through the years for playing 78 RPM records. "Oh, yeah, I remember those as fondly as I remember my first root canal," I hear someone mumble, bitingly. Uh, moving right along, my top recommendation among vintage turntables was the Strathclyde STD 305D, in no small part on the strength of its nearly unique built-in digital speed display reading in RPM, and I wrote of how I'd lucked into one on Canuck Audio Mart not long before starting the article. Over the following months nothing altered my opinion; the turntable got quite the workout, with the display my ever faithful guide in selecting and documenting playback speeds.

Ever faithful, that is, until last December 21, when, I suppose as an early Christmas present, the display went dim and showed only what amounts to a line of hyphens across the top and another across the bottom. No sign of the numerical readout. My usual sophisticated testing regimen (that is, turning the unit off and back on again) was ineffectual, and I quickly realized that a trip to the repair shop was the order of the day.

I suppose I should have been expecting something like that. Harkening back to my own article published months before, remarking on some fussiness in the controls, I'd pointed out that the Strathclyde had a potential Achilles heel:

Finally, the touchpad problem raises a matter that, while not exactly a flaw, is still a concern: the “time bomb” issue. Strathclyde 305D turntables are well into their fourth decade of service, laden with what were then pushing-the-envelope electronics, not widely distributed outside Europe (perhaps even outside the United Kingdom), and now orphans. When new, they seem not to have sold in large numbers, or at least they don't turn up all that frequently on the used equipment market.... If you want to buy one, be prepared to do some patient hunting and join me in hoping you never need to chase down spare parts! 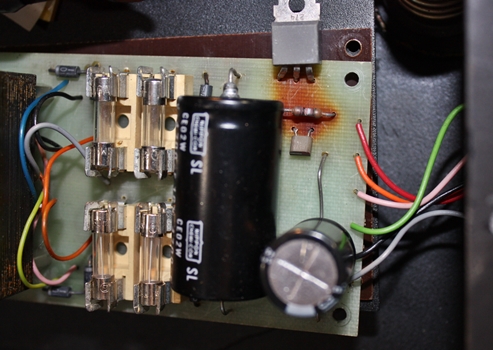 Now that "potential" had become "actual," I did some looking around on the Web, which revealed dysfunctional displays are a common failure in Strathclydes, or at least as "common" as is possible in such an uncommon model. Of maybe three that I've seen on eBay in the time since my article ran, the most recent was in that condition, and a senior member of the Lenco Heaven forum, who once maintained a website devoted to Strathclydes, wrote that it had afflicted his as well. He also indicated he never managed to determine what the problem was or how to fix it, leading him eventually to sell it and turn his affections to Lenco. Time for the obligatory "spoiler alert": after a good bit of detective work, Bill Thalmann, the technician to whom I entrusted my Strathclyde, managed to figure out the problem and bring my display back to life. Accordingly, schematics apparently being nonexistent and other maintenance information being nearly so, I'm writing this supplement to my earlier musings in hopes it will help some other Strathclyde owner in the future.

Briefly put, here's what Bill initially found upon inspecting the turntable's electronics: "There is a blown section of the power supply and there are two parts that are burned beyond recognition, so would need either a schematic or a donor unit to go further with it. The display itself (fluorescent) may be bad, but won’t know for sure until supply is fixed." An adjacent photo shows the culprit.

I proceeded to check the a few sources for schematics with the same success rate as I'd had with my sophisticated testing regimen. Fortunately, a friend in England has a 305D and kindly opened it up to take a photo of the affected components. With that start and a bit of further detective work, Bill was able to determine the blown section was a 5 volt voltage regulator. He made short work of designing and installing a replacement, in his words much heavier duty than the original, and--voila!--the display was back in full function. Problem solved.

And they all lived happily ever after.

Except, as we all know, maintaining vintage audio gear is a...

Special thanks to Bill Thalmann of Music Technology in Springfield, Virginia, who kept whacking at my problem until it was solved, and to my modest English friend, who asks that he not be named but who is the proprietor of the excellent and entertaining blog Grumpy's Classics Cave, without whose help we would have been stuck at Charlie Chan's celebrated "stone wall" with no hope of "turning to find new path."