If you've read any of my prior ramblings in this distinguished publication, I imagine you've noticed one thing: before the standardization of the LP, all the major players who issued records had, and acted on, their own ideas of how the things should work. Variations are less pronounced among the products of the more minor players, but I assure you they are there nonetheless. Thus, the burden, and a lot of the fun, of playing back these old recordings is figuring out just what equipment and settings are appropriate for each. Back when the CD was still a shiny, new technology, someone made the disparaging remark about analogue records that playing them amounts to dragging a stick through a ditch. In my most recent article, I offered some musings about ditches. Today, let's turn the spotlight on some of the sticks.

Needles/styli of the pre-LP period could be classified in any number of ways, but probably the most useful is "permanent" vs. "replaceable." Most vertical cut recordings were played with the former; a few vertical cut records from smaller makers and, up into the late 1930s or so, just about all lateral cut records were played with the latter. To start at the beginning, all cylinders were played with permanent jeweled styli. At first, these were invariably sapphires. Later, after more robust celluloid supplanted fragile wax as a record material, diamonds came to be preferred. In either case, Edison's machines were designed so that the stylus "floated" in the groove, with a mechanical feed carrying it across the record surface. Other makers allowed the record groove to carry the reproducing mechanism in the way more familiar to us, but on the strength of what turns up today Edison seems to have taken by far the larger part of the market, at least here in the United States. Edison continued with this approach when he introduced his line disc records. 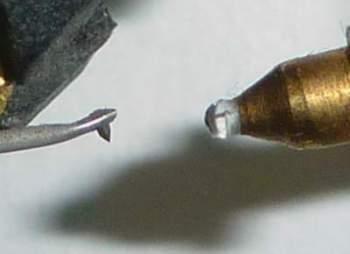 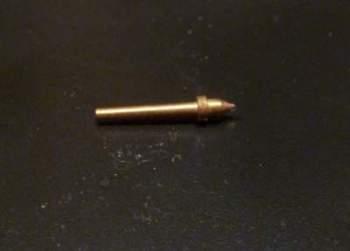 
The major European purveyor of vertical cut records, of course, was the French firm Path&eacute. Like Edison (and Columbia, the other major US company of pioneer days), this company began by marketing cylinders, and its two-minute cylinders and players are interchangeable with corresponding Edison products. Pathé, like Columbia, adopted discs much earlier than Edison. Unlike Columbia, however, the Pathé disc system remained vertical cut, and unlike any other major company's it relied on a broad, shallow groove played back with a spherical sapphire stylus of larger radius than any other of which I'm aware. In some respects it resembled a replaceable stylus, as it was mounted on a brass shank held in the reproducer by a chuck resembling that of an electric drill, but the company billed it as "permanent"; I think the chuck mounting was to accommodate switching to steel needles for lateral records, as Path&eacutephones could play both vertical cut Pathé discs and standard laterals. The principal complexity here is ensuring that no Pathé "sapphire disc" record ever be played with a steel needle; one such playing is generally enough to trash the record.

Edison records present a somewhat more complex situation. In the cylinder world, "standard sized" recordings came primarily in two flavors: two-minute and four-minute. As flat disks began to make serious inroads into the market after the turn of the 20th century, one selling point was that they played longer than the competing cylinders. A 10" 78 RPM disk side would play around 3 minutes, a 12" one up to maybe four-and-a-half; by contrast, the conventional "two-minute wax" cylinder, as you'd expect from the name, ran no more than about two minutes. Most cylinder manufacturers began to drop away at this time, but not Thomas Edison, who remained loyal to this format to the bitter end of his company; to meet this challenge, he followed the lead of another, minor maker and began issuing cylinders that would double the former cylinder limit to four minutes, first made of a somewhat harder, more brittle wax than their two-minute cousins and called "Amberol" cylinders, later made, mostly, of a rich blue celluloid over a plaster core and called "Blue Amberol" cylinders. Some celluloid four-minute Edison cylinders are lavender in color; these celebrity "Royal Purple Amberol" series cylinders were tasked with countering Victor's Red Seal disks, and as they did not sell well they carry quite a collector's premium today, even though most after the very earliest issues were dubbed from the masters for Edison disks that are readily available for a fraction of the price. Before the adoption of celluloid, the celebrity series cylinders were all "originals" made of the same black wax as popular issues but packaged in a rich maroon and gold case.

Now, cylinders were of fixed physical dimensions, and after the earliest they played at a standard 160 RPM, so how was their playing time to be increased? The answer, of course, was to double the groove thread density, to cut the width of the groove in half. Because his machines relied on a mechanical feed to drive the stylus across the record, that approach required Edison to issue all new model machines with modified gearing and to produce reduction gear kits for existing ones, in each case usually incorporating a gear shift to select for the type of cylinder being played. It also required issuing reproducers with a new, smaller stylus size. For the "gold molded" two-minute wax cylinders, the standard Edison reproducer was the Model C. For the new Amberols, it was the Model H. Woe be to you if you mix them up! In particular, the smaller stylus of the Model H will brutally shave the groove of any two-minute wax cylinder with which it makes contact. As a safety precaution, Model H reproducers originally were released tinted with green paint, but only for a fairly brief time, and the paint has usually worn off most of those that at one time had it. Care by the user is the sole sure protection.

Later on, Edison introduced some ingenious combination models that could handle either type of cylinder, the most desirable being the Model O. This type featured a flip-over arrangement very like that of a ceramic cartridge for one of those old BSR stereo changers. Again, you must take care to choose the correct stylus for the type of cylinder you are trying to play.

History repeats itself, the saying goes, and so it is with Edison's disk records. A latecomer to disks, he devised his standard system, introduced in 1913, to rely on the same mechanical feed principle embodied in his cylinder machines and a reproducer adapted from cylinder models, fitted with a precision-ground, standard-sized diamond tip. The "diamond disc" records were 10" in diameter, but because Edison adopted a groove pitch of 150 threads to the inch, much finer than that of standard lateral records, they played about as long as a 12" side from anybody else. Move ahead 10 years or so, and the Edison disc system was under ferocious (and soon fatal) assault from a new technology: electric recording, which among other things delivered bass response unheard of from the old acoustic "horn and diaphragm" records. Edison's response, once again, was to increase playing time, and once again the method was by increasing the groove pitch, this time to a mindboggling 450 threads per inch, almost twice as fine as a modern stereo LP microgroove. Playback, of course, called for exactly the same accommodations: incorporation of new gearing and shifters into new model machines, adapter kits for old ones, and a new reproducer with a finer stylus, probably the smallest ever issued for analogue sound playback. The result was a record that played for up to 20 minutes per side at 80 RPM. Unfortunately, the system was far ahead of its time in some respects and hobbled by old technology in others, and it failed completely as a commercial proposition. It did, however, leave the would-be player of Edison discs with the need to ensure that the standard discs be played only with the standard-sized diamond and, more importantly, that no long-play Edison disc ever be played with other than the long-play stylus.

The foregoing covers the basics of permanent styli for vertical cut recordings. Let's call a pause here; we'll pick back up with replaceable needles next time. Happy listening!