In the first part of this article, we explored some efforts to bring what we'd now consider "modern" recording and pressing practices to the conventional 78 RPM record when that format was still current. Now the time has come to cast our eyes--and, I hope, ears!--on some embodiments of this venerable format issued well after its displacement as the commercial standard.

The first thing to get out of the way is the misconception 78s disappeared entirely in the 1950s, as the LP swept them from commercial dominance. Not quite so; labels aimed at certain narrow market niches persisted in issuing 78s well into the 1960s. Probably the most common are children's records on labels like Peter Pan and Disneyland, but certain labels aimed at the grownups also remained active in the format: for example, an interesting blog called "American 78s - The Last Year" documents Spanish language 78s on Seeco Records from 1962 and 1963 and gospel recordings on the Music City label that may date as late as 1965.

Leaving aside these obscure issues for narrow market niches, 78s have appeared from time to time during the LP and CD eras, and, as we shall see, they even continue to do so as streaming threatens to displace physical formats as the primary means of music distribution. Broadly speaking, these latter-day releases fall into one of two categories. 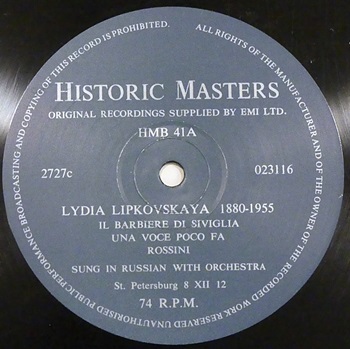 The first would be pressings of old records in modern vinyl. For those of us who collect operatic recordings, the best known example would be the English series known as Historic Masters. As you might guess from the name, these issues are pressings in modern vinyl from original metal stampers. The series began as a joint venture with the British Institute of Recorded Sound in 1973, reorganized as an independent subscription-based organization in the early 1980s, and continued until a few years ago, ultimately releasing more than 500 disks. Naturally, these issues retained the wide groove characteristics of the original masters from which they were pressed.

A more recent example of modern vinyl issues deriving from old metal masters would be "Glenn Miller--Swing for the Jukebox" (Rollofone GMSET, 5 10" 78 RPM records), but this set takes a more interventionist approach: the metal masters for 10 classic Glenn Miller sides were copied to DSD digital files from which Rollofone created new masters for the 78 RPM vinyl records. The grooves are something of a hybrid; as the company describes them, "The records will be cut with a 'micro groove' stylus. However: To accommodate standard groove pickups, we will cut the records a bit deeper which opens the groove at the top allowing the tracking with standard groove styli as well." No explanation is given for creating new masters rather than pressing the old ones in the Historic Masters manner. The set is available in a limited issue of 200 copies.

Not all such issues are from metal masters; occasionally, material from old master tapes will find its way onto 78s. For instance, in the late 1980s Rhino Records released a series of 78 RPM sets collecting classic oldies, supposedly aimed at those who owned vintage jukeboxes at home. Rhino claimed the records derived from original master tapes and released them in very small numbers. At least some were in stereo.

The second approach is to record new music for release on 78 RPM records. Most such efforts seem to be either special issues for the vintage record collectors' trade or else "one-offs" issued as promotional items or as part of a project. One of the latter sort dated to around 1980, when Nimbus issued a 5-record set called "Comparisons" presenting a performance of one work, Beethoven's Hammerklavier Sonata, recorded digitally and in analogue at 33.3 and 45 RPM--and the final movement at 78. This recording, aimed squarely at audiophiles who even then were debating the relative merits of analogue and digital recording techniques, was in stereo, and the pressing was microgrooved--in essence, a conventional LP of its day "sped up" to the old standard speed. I'm not sure if it was a limited release, but I've certainly never seen a copy in the flesh.[2] In more recent years, special 78 RPM releases seem to have been fairly regular features of "Record Store Day."

Not issued as a promotion, nor yet in conjunction for some project, nor yet as a standard commercial item--indeed, as was characteristic of the artist, released in 78 for no immediately apparent reason at all--were two 10" 1996 disks recorded by "American primative" guitarist John Fahey (about whom a bit more here). As far as I know, their circulation would have been private, not by general distribution, but copies do turn up now and again, and they are in demand by Fahey's fans.

Possibly surprising to many of the TNT readers whose interest skews more than mine to popular music, even certain records of The Beatles had 78 RPM issues. As the group rocketed to the status of international phenomenon, its records naturally were in demand in countries that had lagged England, Europe, and the United States in adopting the LP standard. Accordingly, in those places Parlophone or licensees pressed Beatles 78s to meet local conditions. I imagine India is the example best known to the music loving public at large, but similar 78 RPM issues also appeared in the Philippines, Colombia, and Argentina. These "foreign" issues were never exported, and as you can imagine a certain collector's premium attaches to them today.

And what of today? To my surprise, a doughty little record label is actually making shiny, new stereo recordings and issuing them at 78 RPM as part of its regular catalogue, not as promotional issues or novelty one-offs. The results are--oh, but now we've come to a side break. I'll pick back up there next time. See you on the flip side!

[1] - With apologies to Alan Walker, whose song "Faded" containing this line is one of my teenaged daughter's favorites.

[2] - I do have one of the Nimbus "Super Analogue Master" 45 RPM issues, a collection of Soler harpsichord sonatas performed by the excellent English harpsichordist Gilbert Rowland years before he undertook a complete cycle on Naxos CDs. Even at that higher speed, the Nimbus record manages to cram better than 30 minutes' worth of music on each side, a feat reminiscent of Edison's long-playing diamond discs that managed 20 minutes per side at 80 RPM.