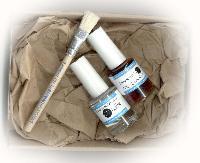 You already know the story as you've probably read the Inter.View with Dieter Ennemoser, the man behind the C37 theory, here on your beloved TNT-Audio. 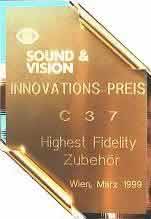 Recently the C37 lacquer has received the prestigious Inno S&V 99 award for the category HiFi Accessories.
So I won't go into details here, I just want to let you know that I've tested the C37 lacquer and got some interesting result. But please read on.

The C37 lacquer comes in two versions: 20C and 35C, the first intended to work with "cold" stuff (drivers' membranes, phono cartridges, cables...), the latter made especially for audio circuit boards.
It is an amber-coloured transparent paint with the usual strong smell of common wood paints.
I've tested, by now, just the 20C version. A review of the 35C version is on it's way.
First of all, let me say that the whole testing procedure hasn't been EASY since, once applied, you can't remove the lacquer! Plus, it takes several weeks before the results become "stable".

HOW and WHERE to use it

The 20C version is meant to treat EVERY kind of driver made on Earth: woofers, tweeters, midranges of any material. Plus, you can use it to "tune" any other piece of your HiFi set-up which remains COLD while operating: cartridges, cables, platters etc.
I've put this stuff almost everywhere and I'm about to tell you WHERE it worked best (and worst :-) ).
Applying the lacquer is easy as you can imagine: with the soft brush included into the C37 package you apply a thin layer of lacquer, previously diluted using the special thinner (solvent).
The user manual is very detailed about the percentages so I won't go into details here.
Depending on the material, you may need to apply several layers of this stuff, till the surface of the object becomes polished and shiny. On paper drivers this may require even 4 or 5 layers. On not-absorbing stuff 1 or 2 layers are enough.
I've applied the C37 lacquer on: loudspeaker drivers, turntable platters and cartridges. Here are the results:

First of all the most common application: C37 on loudspeakers drivers.
The first thing one notices is that the C37 lacquer stiffens the membranes hence it minimizes break-up phenomena.
As a result, the frequency response becomes more linear and distortion appears to be lower. Especially small woofers seem to benefit from the C37 treatment, in the sense that it seems to improve the frequency response of the mid range, making the "intersection" with the tweeter far more linear.
On large woofers the lacquer may help preventing early break-ups at high sound pressure levels.
Generally speaking a clear increase of transparency can be perceived: it is like more musical informations flow through the loudspeaker.
On the other hand, don't forget that a couple of layers of C37 lacquer DO increase the moving mass of the driver. As a result, you need to treat both the woofer and the tweeter in order to avoid "speed response mismatch" between the two drivers.
On a pair of minimonitors, I treated the woofer before the tweeter and the drop in "speed" and "dynamics" was clearly audible.
It seems to me that even the driver sensitivity decreases a bit. Anyway, this phenomenon is counterbalanced by the increased rigidity of the membranes so...nothing really changes seriously.
To cut a long story short here are the benefits of the C37 treatment on loudspeakers: increased stiffness of the membranes, improved transparency, more detail and musical informations, lower distortion. Some minor drawback: added moving weight, slightly diminished efficiency.

Then I've applied the C37 on the platter of my third turntable, the tweak-battlefield :-) Garrard Zero 100 SB. As you may know that platter is pretty resonant (hence the use of the TNT Janus damping mat) so I've decided to give the C37 a try.
I've applied two layers of C37 on the platter (upper side) and, after it dried, I have listened to the resonances and "ringings" I knew pretty well.
Quite surprisingly, the effect of the C37 has been different from the one I expected: the main "ringing" frequency was higher, so the platter ringed with different harmonics. It seems the C37 lacquer shifts the resonances (or the harmonics of the fundamental frequencies) towards higher frequencies, "tuning" the object in some sense.

Finally, I've applied the C37 even on the body of a cheap Grado cartridge (installed on the Garrard) and started to listen to the whole tweaked C37'ed set-up. The effect was pretty similar to the one perceived with the loudspeakers: higher transparency and cleaner mid-high range. The bass notes were tighter too, even if slightly lighter.

Other experiments (thanks Ruggero!) confirmed my findings so that I can conclude the C37 lacquer works and works pretty well. Anyway, please read below for further warnings and suggestions.

The C37's owner manual, available in English, Deutch and French, suggests to wait at least 4 four weeks before judging the final result. Yes, the lacquer dries in 24 hours (even less) but the positive effects can be heard only after 4 weeks. Voodoo science? NO! I can confirm this and, even better, I suggest to wait at least two months before judging the results.
In the meanwhile the sound may vary from terrible to fantastic depending on days/hours of the day. I know this may sound crazy...but if is there a thing I can give you for granted is exactly this funny effect: one day the system will sound very good, another day will sound terrible (i.e. worse than before the treatment...) so, please, don't get frustrated if the first results don't match your expectations, be patient and wait.
Finally, be careful when using the lacquer on fragile/moving parts: do not paint any object such as cantilever, stylus, belt, bearings and apply it trying to create a layer as EVEN as you can: uneven mass displacement can be detrimental.

The major drawback of the C37 lacquer is the added mass that can modify drivers' efficiency and dynamics. The increased stiffness slightly counterbalances the effect, though.
Then you can't remove the lacquer: once applied it will stay there forever...so, if you don't like the effect...you can't go back. For this reason I suggest to treat a pair of loudspeakers of a second HiFi system first (you wife's, your kids' :-)) so that you can safely :-) evaluate the results (that's what I did :-) ).
The real problem is the long time you have to wait before getting definitive results.

A 50 ml bottle is sufficient to treat even many extra-large loudspeaker drivers, so the rather high price should be considered relatively to the number of drivers/things you can "tweak". Thought this way the C37 lacquer isn't more expensive than any other fancy HiFi fluid or magic potion.

The C37 lacquer adds transparency, detail and musical informations to your system.
Considering the strange (yet very interesting) theory behind the C37 idea I would say there should be some truth in it: the C37 lacquer works and gives exactly what promises: more Music for our ears!

Thanks to Dieter Ennemoser for having sent us this surprising lacquer for our test!