Deflex panels have been around for quite a while now and have received good reviews in the press so I thought it was time I gave them a try. They are damping pads designed to go inside your speakers to replace lining foam or similar and to damp the resonant modes of a typical box speaker. The panels are made of a black sticky substance rather like sorbothane - obviously some kind of high loss polymer. They're only about 1 cm thick and have sculpted into the surface a series of concentric rings which form a "Fresnel" lens. Now if your wondering what that is, the last time you saw one was probably at the dentist. Before the torture begins a large light is brought down to look into your mouth. This focusses the light into a small area by using a fresnel lens (you can feel the heat of it.... gulp - enough of that...). Other applications are in lighthouses, car headlights and those credit card magnifiers, though the principle is very widely used elsewhere. So the Deflex panel is designed to work as an acoustic lens, making the main driver see a curved rear surface of the speaker rather than a flat reflective one. All other damping materials I'm aware of merely try to absorb or scatter this back radiation. 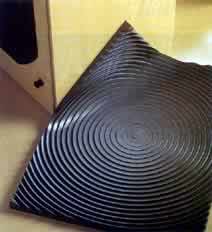 I tried out the panels, you need at least one per speaker and they come in several sizes, on my two IPL M3 speaker cabinets - 7ltr Morel based sealed boxes. The result was wholly benificial, there was a marginal improvement right across the board, better imaging, clearer treble, faster bass and noticeable improvement in the "bloom" in the upper bass/lower mid that previously had been irritating.
In all, these improvements added up to a significant upgrade, and I could detect no downside, certainly colouration fell noticeably the speakers sounding less 'boxy'.

The "Magnapads" are similar but smaller and are designed to be glued to the magnet of the main driver to prevent reflected sound waves interfering with it's operation. On the Morel units the IPL's use I found it hard to notice their effect, but it certainly didn't worsen the sound and other less well protected magnet assemblies might well benifit more.
Trying the "Deflex" on a pair of Linn Indexes brought even bigger gains, their relatively cheap and resonant boxes gaining more than the solid IPL enclosures.
The point is that two "Magnapads" + two "Deflex panels" cost £15 and for that they are tremendous value and have got to be worth trying.
One word of caution, some speakers have gaskets that are destroyed if the main driver is removed, if the main driver doesn't come out once the bolts are undone don't try levering or forcing it out.
If you don't like the effect you are left with the option of returning the speaker to it's original spec and using the panels beneath equipment as their sorbothane like qualities can work in this mode too!

This neatly brings us on to the same company's "Foculpods". These are made of a similar material and are formed into domes a bit bigger than half a squash ball. They are designed to carry a maximum load of 15 kgs between the four of them. Being awkward I immediately put them under the slab of marble that supports my Orbe - a total weight of about 50 kgs.
Though the Foculpods sqashed a fair bit they retained plenty of compliance, a good cm. of vertical movement being available. The result is an excellent isolating platform, replacing the marble with MDF worked a treat too and would give you an excellent turntable support for about £15!
The effect with the Orbe, a very well isolated turntable in the first place, was a slight clearing of the sound, bass being a touch dryer and faster. The results were not dramatic, but for the price well worth while, and under a solid plinth deck I'd expect improvements of a more obvious nature. These things are always subject to the deck used and position, but again the effect was wholly benificial.
A similar result was achieved with the Foculpods under my Micromega Solo, and under a valve preamp I have here under test though here no extra board was used the "pods" just being stuffed underneath. Interestingly some ampifier manufacturers such as Audion are using similar compliant feet under their equipment so it's an idea that has become mainstream.

In a world of very expensive "tweeks" these damping materials all offer great value for money and enable the hard up to experiment with their hi-fi for the price of a pub lunch.
In particular the Deflex panels are a "must try" for any box loudspeaker - highly recommended.