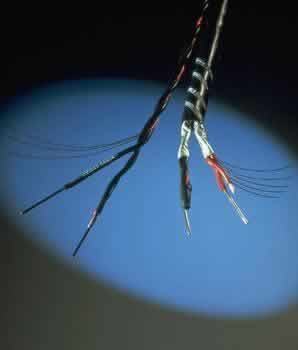 I won't do the obvious and say that this cable is unoriginal, but is about the simplest construction possible. It's make up of a quality copper, multistranded twisted pair, insulated with PVC. Over this is a plastic braid to keep things neat and two pairs of high quality aluminium bodied phono plugs.
Though a simple design, as always the devil is in the detail and Origin say that much work has gone into the spacing and strand thickness amongst other things. The aluminium bodied plugs were chosen because of their very high conductivity (twice that of brass) and because comparative testing showed them to sound best... I can't fault the construction, all joints being very neat.

I've various "home brewed" cables in use at the moment, most of which give a good account against commercial cables. The best are a set using a shielded silver solid core with PTFE insulation, a combination that would cost rather more that the Origin's 59 pounds if used in a commercial cable. Replacing this with the Origin cable reduced the 'brightness' often found with silver.
As an interconnect between my Micromega Solo and Silver Knight pre this was successful with very little reduction in "air" over the silver cable and excellent detail retrieval.
Images were solid and the soundstage sufficiently wide and deep. It's not a cable that jumps out at you, being smooth without grain and yet sharp enough not to be soporific. Sure you can spend a lot more and get better quality, or 'roll your own, but adding up the cost of really high quality plugs and a decent cable wouldn't give that much of a saving even if it did sound as good... The Origin doesn't scale the high-end, but for all that it is a noticeably "honest" cable.
My biggest gripe with the cable is its neutrality! Cables are often useful for fine tuning the balance of a system, one reason why I keep different sets. The Origin sits firmly in the neutral camp, which of course is how it should be. Here I may be seeming to "damn with faint praise", but as I write the cable is sitting happily between a 2000+ pound CD player and a 1500 pound pre-amp without drawing attention to itself, which in my book makes it something of a bargain.

Ah now we get "original". I don't suppose I'm breaking the official secrets act when I say that most hi-fi cables are "designed" by a retailer listening to loads of combinations of "off the roll" cables from a manufacturer, then rebranding them and selling them at a massive mark-up.
Very little original research is done and each new cable comes with a load of pseudo-scientific mumbo-jumbo to explain why it works. No-where is this more apparent than in speaker cables, where the number of 'different' dumbell or figure-of-eight multicores with clear insulation is extraordinary. This is one reason why home rolled cables such as FFRC so easily outperform most budget cables.

So it's refreshing to come across something as different as this. I don't know what the theories are behind it and suspect that a lot of 'trial and error' research produced it, but what it most definitely is not is a 'me too' cable off an OEM manufacturers roll.

The Origin cable is an awkward sod to use, as it's a massive heavy concoction of 2mm thick solid copper cores - four to a cable. These are arranged in two twisted pairs with heavy aluminium foil screen around each, mixed with three strands of what looks like polypropylene "string" ("baler twine" for farmers out there...). This mix is then encased (I can think of no better word) in a thick black plastic sheath.
There are also five fine solid core cables per twisted pair, though these are not connected and serve no function in this incarnation of the cable.
The result is the stiffest and most unmanageable cable I've come across... If you thought Naim NAC A5 was difficult you ain't seen nothin' yet... Forget hiding this stuff under a carpet, or twisting it around some tortuous path to the back of your hi-fi. Mind you if you don't like it you can always use it to jumpstart your car, or failing that, tow it home :-)

Connecting the cable requires you to strip the outer plastic, I found scoring around the outer then bending it to snap it all round, then pulling it off like a sock the only was to avoid serious blood loss - OK so I sliced my thumb... One core from each twisted pair make the positive, the other pair the return. If you want to bi-wire just use one of each pair for the plusses etc.

As Michael Portillo almost said, "There are four letters that strike fear into the heart of the enemy - F.F.R.C.". This little cable based on CAT 5 computer cable has happily outperformed all budget contenders in my system, is easy to make and costs about 1.50 a metre.
The Origin costs considerable more, but to be fair a couple of metres a side isn't going to break the bank either way so I class them as being of similar cost. Here I have to say that the Origin acquitted itself very well. It was a match in detail retrieval and soundstaging, producing bold solid images.
At the top end it was a little less extended, smoother if you like. Sibilants were less splashy, cymbals has less shine - a good or bad thing depending on your system. The bass had a softer more restrained quality. These are not criticisms, just the characteristics of the cable, some may prefer the Origin over the FFRC, a change of cartridge or different recording swinging it one way or another. Compared to the generic dumbell it was ahead by a country mile, more open and far more dynamic, with none of the grain that characterises cheapo figure-of-eight cables.

So two interesting cables from Origin, one utterly conventional, the other anything but. Both share similar characteristics of neutrality without excess. I've said before that I admire manufacturers whose products have a family sound. The laws of chance mean that a retailer selling 15 OEM cables may hit on one success, but to produce two totally unrelated cables with similar sonic footprints requires some skill.
Lastly it's worth remembering that these are 'budget priced' cables and yet Origin offer a no-quibble money back guarantee if you don't like them so experimenting is not the risky business it so often is....