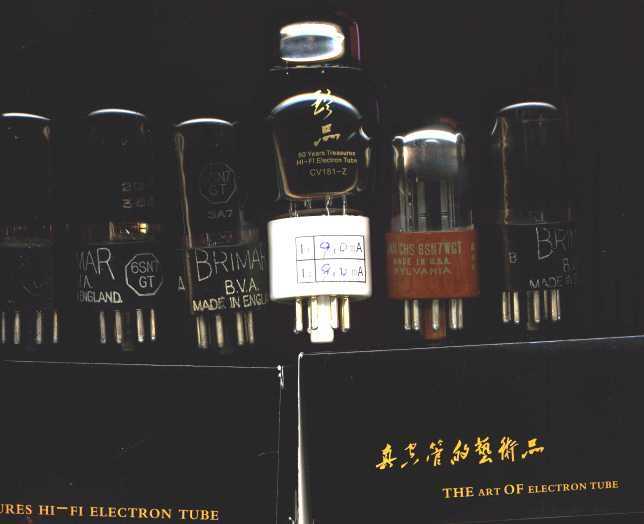 Is the Shuguang Treasure CV181Z
A true CV181
or a 6SN7GT in fancy clothes?
A postmodern dilemma and/or a both/and post-structuralist conundrum?
[Italian version]


"What's the old fool doing?" demand plebs, stage left, "He reviewed this valve only months ago"

As soon as my review appeared of the so called Shuguang Treasures CV181Z I was contacted by Rachel of Grant Fidelity to note that the Shuguang Treasures CV181Z is really a 6SN7 and not a CV181 and please could I print a correction as they were getting worried emails from potential customers. The importers, Grant Fidelity, were concerned that this might affect potential customers who didn't bother to check whether the CV181Z is a CV181 or a 6SN7 and thus reject it on the grounds that their heater supply current transformer secondary might overheat.

Well Shuguang, you have only yourselves to blame if your choice of inaccurate nomenclature prevents audiophiles from trying the finest 6SN7 I have heard to date.

Yes folks, the Shuguang Treasure series measures like a 6SN7. I have not checked this on my TubeImp because I cannot be bothered to build a b9a to Octal conversion socket just to establish that a manufacturer chose to build a really good valve of one sort but to name it another. This is like putting a Porsche badge on a tractor or a van...
"They already did that..." laugh plebs, stage left,"and called it Cayenne!"

Actually it is worse. It is bad enough that in the 21st century when the world of engineering and science has agreed a certain set of rules to describe everything we know, that a few dinosaurs insist in trying to hang on to ill-defined historical alternatives. I may enjoy making prints using Victorian photographic methods, but I measure my materials in the quantities defined by Systeme Internationale d'unités (SI units) These internationally agreed standards of measurement are good because when I write for you, dear readers, you can get out your rulers, tape measures, multimeters and jugs and know exactly what I am talking about. Before that, measures like quarts and gallons were actually different sized in different markets (slightly smaller, for example, in USA). Liberia, the USA and Burma are the only 3 countries of the world of any significant population size who now choose not to use SI as their standards of measurement, and will presumably remain doing as as long as they desire only to measure themselves in relation to each other.

The rest of the world chooses to use a system that enables "any method consistent with the laws of physics could be used to realise any SI unit." (International Bureau of Weights and Measures, 2006). Likewise when I buy oil for my '79 Triumph Bonneville I expect it to be monograde 40 weight for Summer use, not the technically superior Q20-50 multigrade, which would be better for Winter cold start and would be fine in theory but is not what I asked for as my old engine needs heavier oil for its looser tolerances, and I get fewer than 1000 miles before multigrade is too thin.

The point I am labouring here is that engineering & science products should be specified exactly as it says on the box. That is what science and engineering are about. Consistency and repeatability, hence we should always specify a quantity with the permitted variation envelope, hence inexpensive resistors being plus or minus 10% and better selected more expensive versions plus or minus 2%. Buyers then choose what they need according to cost and tolerance.

These two valves are two different valves (not tubes as they're not tube shaped like true 6SN7, 6SL7 &c) according to understood established custom and practice. We valve amplifier builders should share a language with the manufacturers. If I order two new throops for my amplifier, the recipient of the order will naturally be unable to supply me with the desired items because we are not using the commonly agreed terms. Equally, if I order a transformer and (s)he sends me a childrens toy based on TV and film characters I would complain because the context in which we are using the language is one of audiophilia. however if I walked into Hamleys toy store in London to purchase a transformer for my child and the sales assistant handed me a box containing a Sowter MO45 my child would be disappointed, although I would be delighted as they should cost much more than the £45 toy.

Most human commercial communication is made from language, the stringing together of series of discrete packets of meaning (usually words, but here an alphanumeric title). Let us stick to the agreed SI units for audio so stop telling me how many cubic feet you estimate for your driver's VAS because all the equations work in SI.

Perhaps Shuguang have played a blinder here by getting double the attention with their misnomer, or perhaps their hubris at using a rare NOS description from one of the commonest audio octal triodes has hurt their sales? Either way it is irritating to engineers and technicians when the WRONG terms, descriptions or dimensions are casually and unnecessarily employed.

Please stick to the established common terms for device types like valves and transistors, or we all might descend to describing in medieval terms like wavelength in furlongs (named after medieval feudal strip-farming field allocations, i.e. furrow-long) or feet and inches, loudspeaker cone area in perchs, and cone mass in drachms.

"Over 1700 words on a conflation of rant and correction, he'll be writing for a British tabloid next" taunt plebs, stage left